Now there’s a collection of words you don’t read everyday in a sentence!  What on earth do they all have in common.  Well, last Sunday night, I went to see a semi-staged performance of the musical, Fiddler on the Roof, part of this year’s Proms season.

If you’re unfamiliar with The Proms, they’re held every summer, primarily at the Royal Albert Hall, London.  They’ve been going since 1895 and are a musical landmark not just in London but internationally.  There isn’t another music festival or classical music festival like it anywhere else.  This will give you an idea of how they’ve evolved over the 120 years they’ve been running.

Fiddler on the Roof…

… isn’t your typical Broadway musical.  One of it’s most popular songs ‘If I were a rich man,’ is, as the below Proms guide says

It’s still exuberant and witty with many great one-liners but as I said in my previous Proms post, its story of age-old traditions being challenged and people being cruelly dispossessed of their homes and land because of
their culture and faith has no easy happy ending, highlighting its relevance to today’s world. 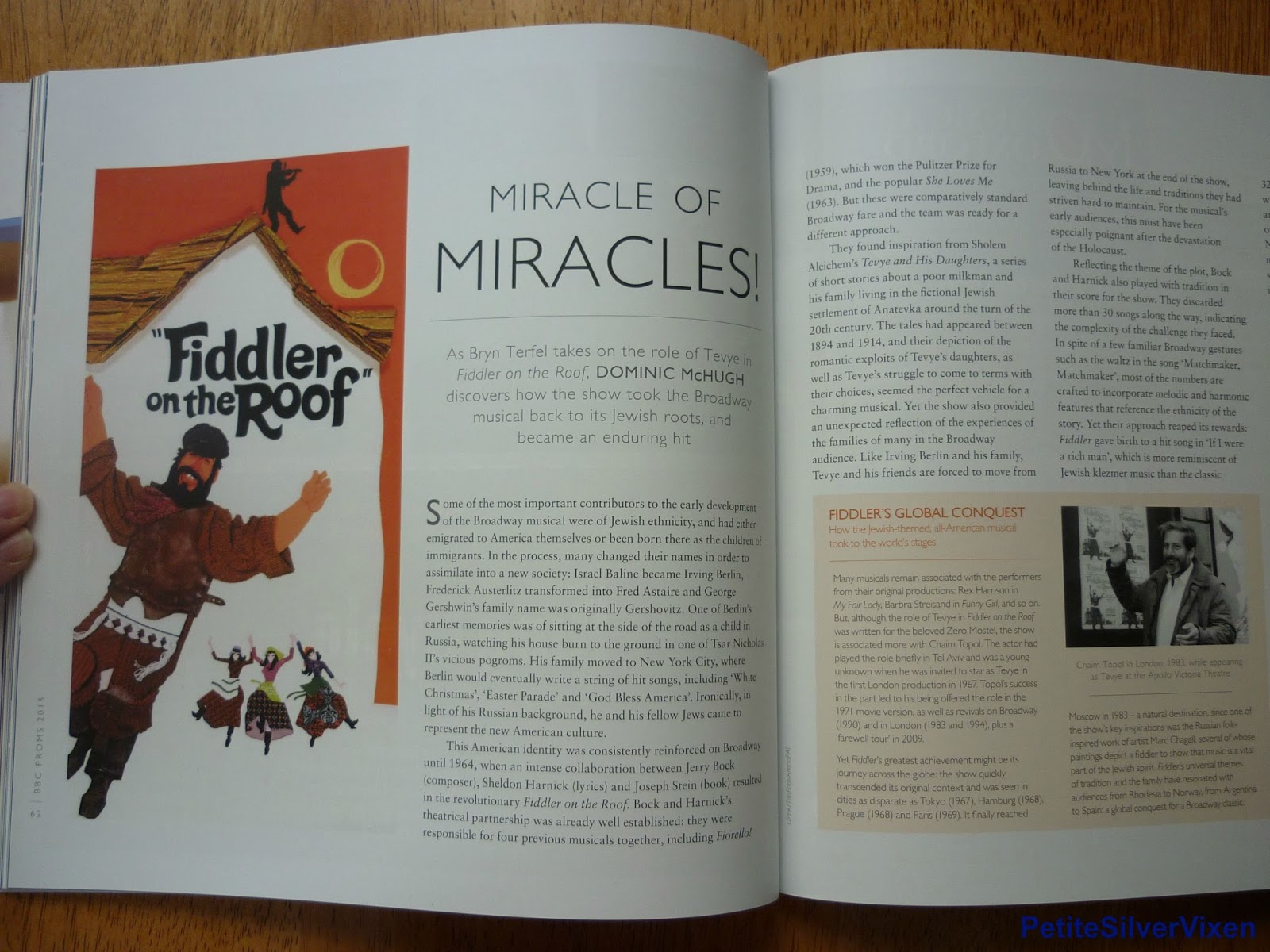 Fashion…
If you’ve not been to The Proms before and think it’s twinset and pearls, think again.  As you can see, I wore a casual outfit, but perfectly suited to promming.  Promming is where you stand for the whole performance, in either the Arena or the Gallery of the Royal Albert Hall, so comfort and ease are the priority.  Of course, people do dress up who have actual seats and on the times when I’ve gone but not prommed, I’ve pushed the satorial boat out.

On the night we went, there was a group of six 20 somethings on one side of us in t-shirts and jeans, a family on the other side with the kids in shorts.  Most Arena prommers wore casual summer clothes that were comfortable and cool.  With a capacity of over 5,000, it heats up in the Hall!

You can read more about my outfit in my Printed Pyjama Pants at the Proms post. 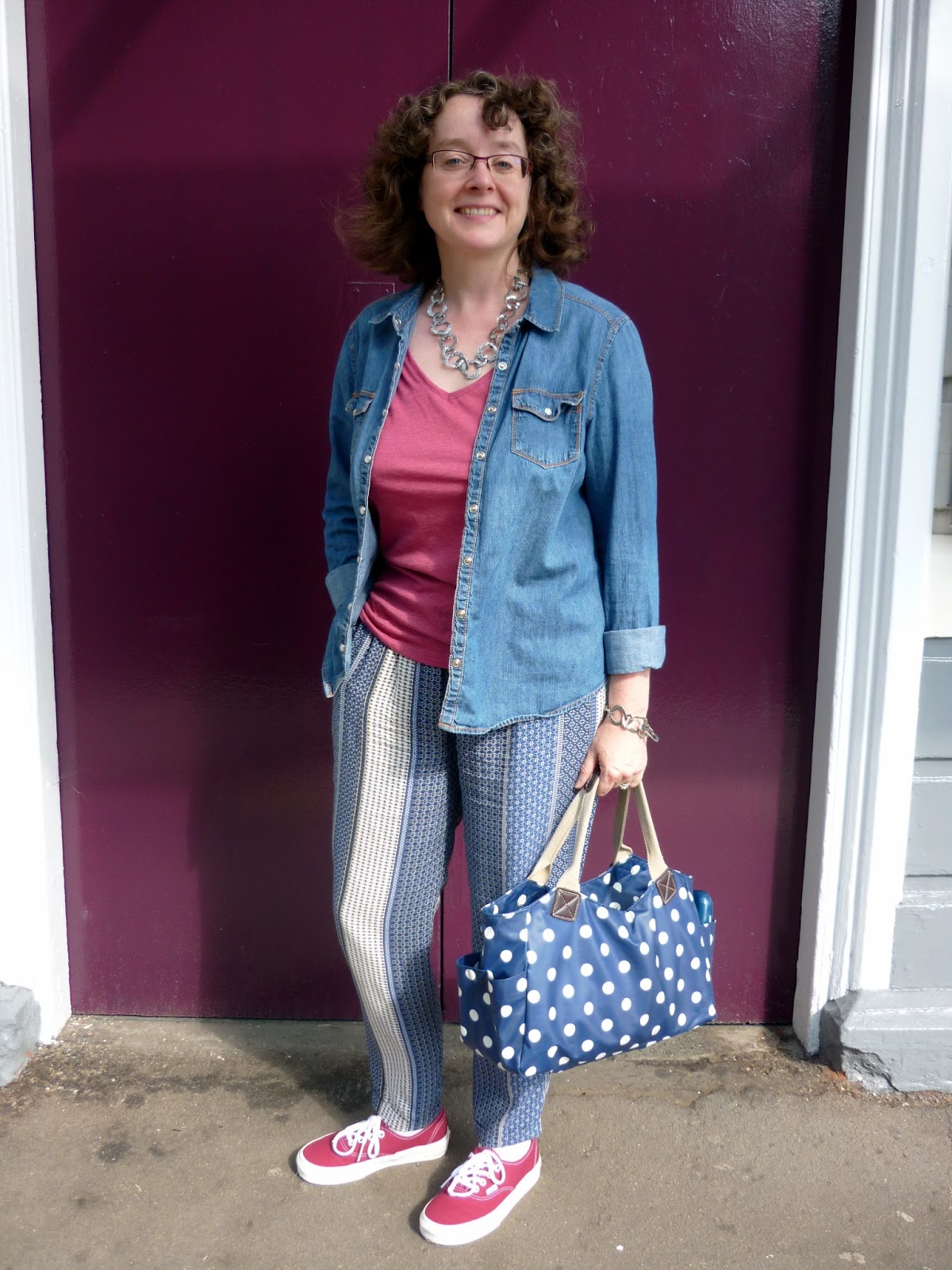 On the way to the Hall, I spotted what looked like a garden shed on scaffolding, which rather amused me.  I wanted to see if they had a kettle in there to make myself a brew but TallBrownFox didn’t fancy climbing up the poles to see. 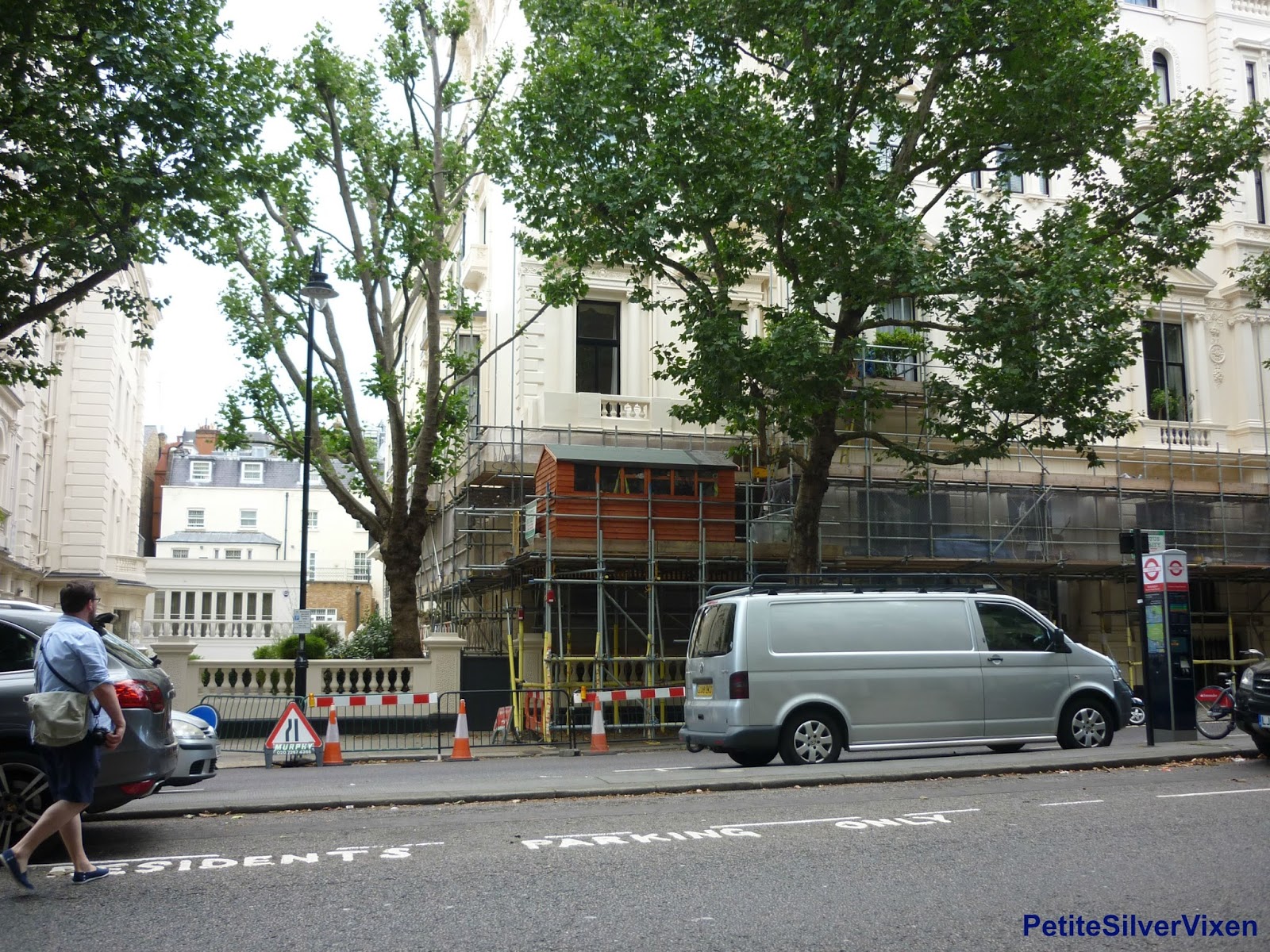 When we arrived there was already quite a queue.  We weren’t surprised.  We knew this would be a popular Prom.  There’s always a friendly atmosphere.  People chatting, reading and further down the line, TallBrownFox noticed someone lying down having a snooze!  Well, the performance was going to be over 3 hours long.  A smart idea to get in forty winks beforehand. 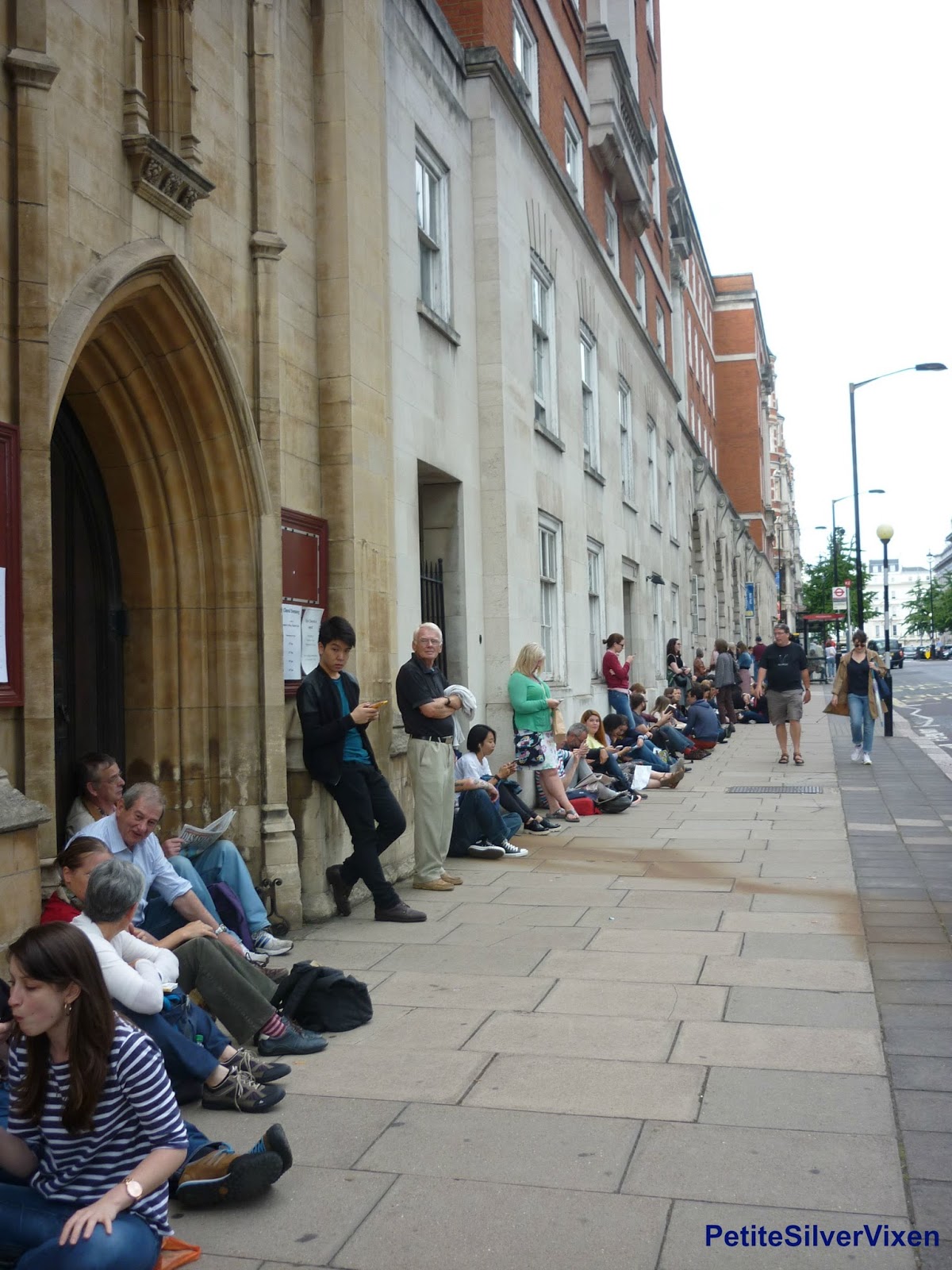 To pass the time I put my camera to good use.  Our place in the queue was outside Holy Trinity Brompton Church.  Old churches are always fascinating subjects to photograph.  I love the dark grains in the wood and the incredible detail on the door knocker and the lock. 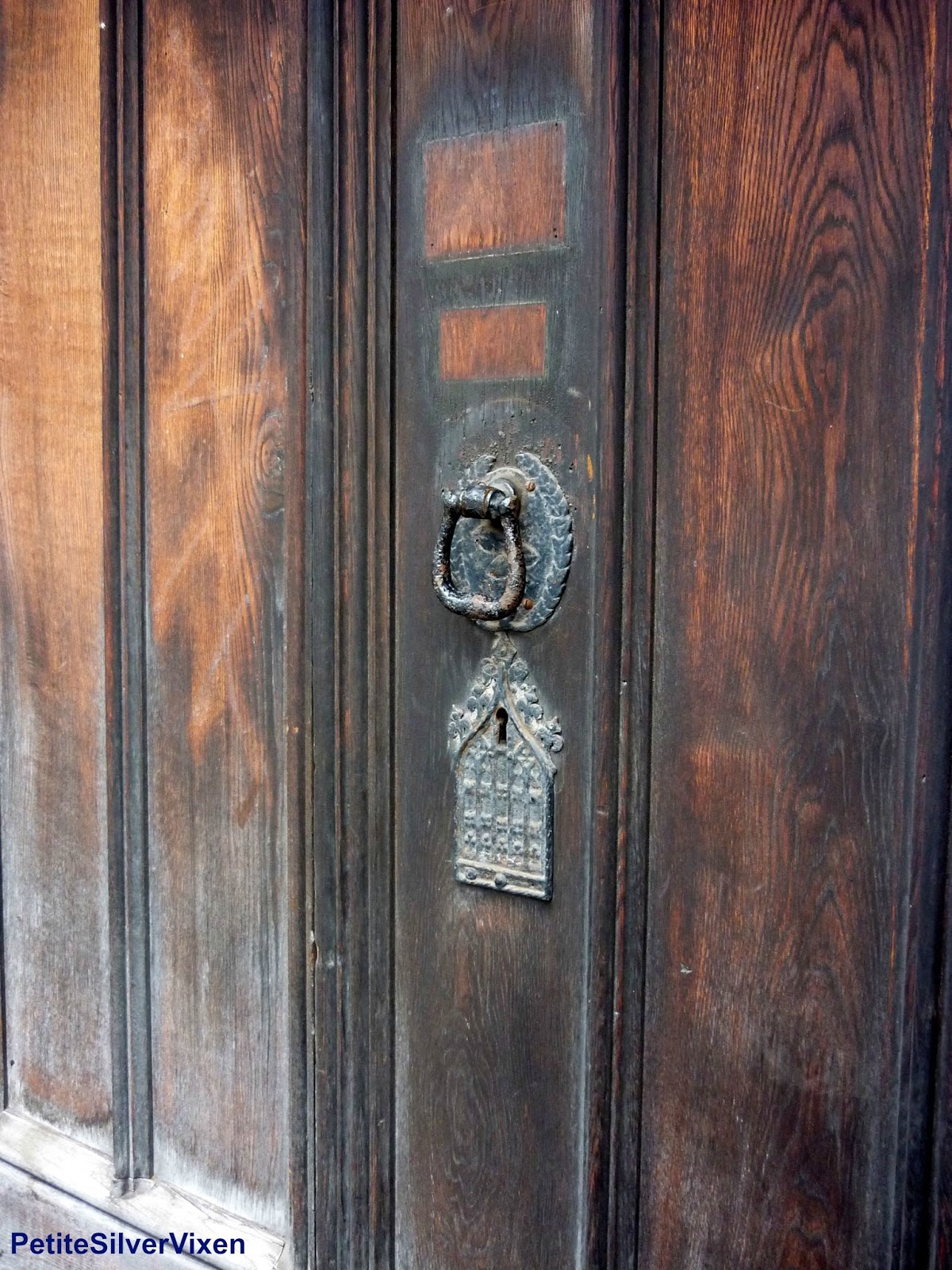 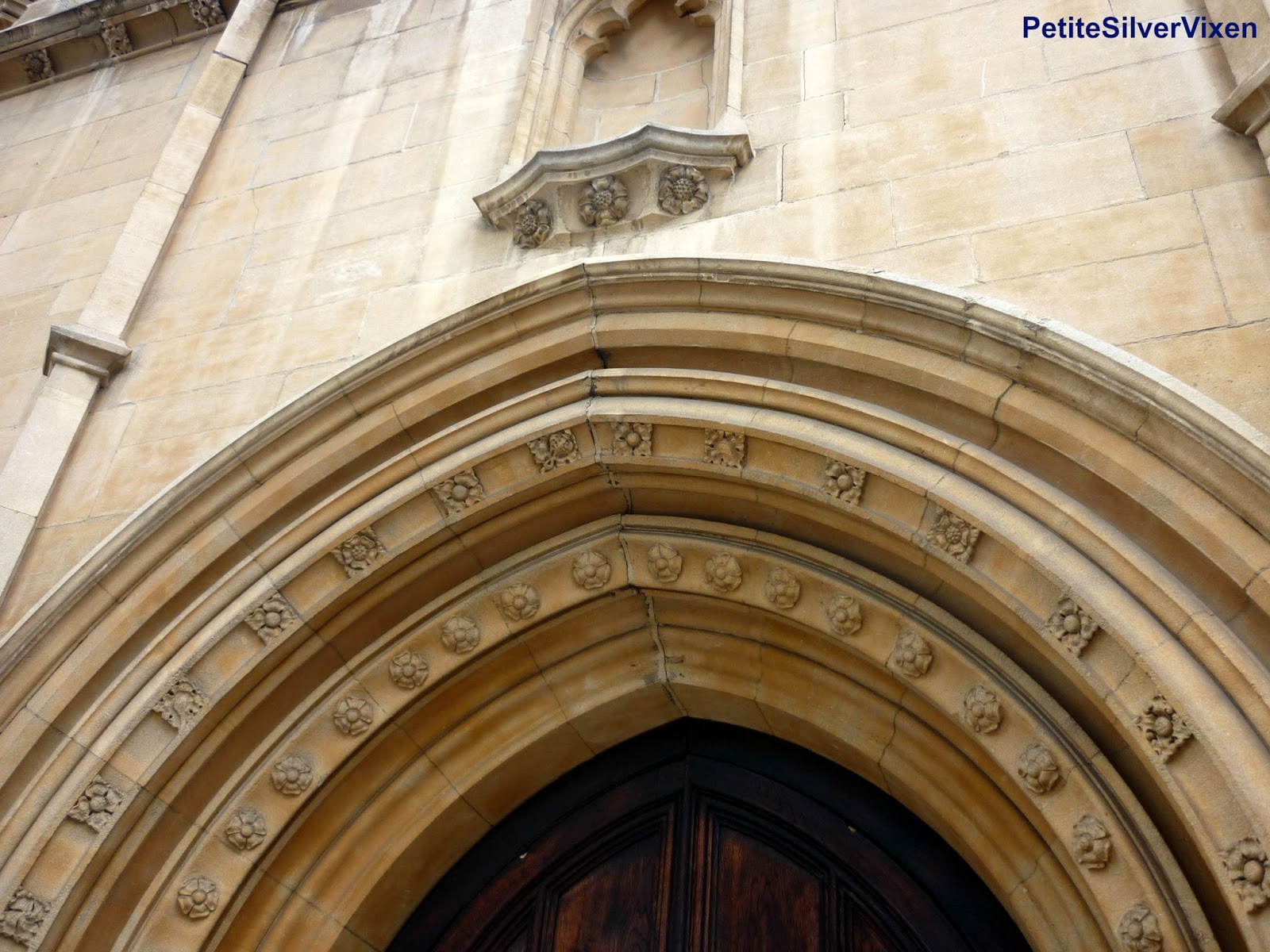 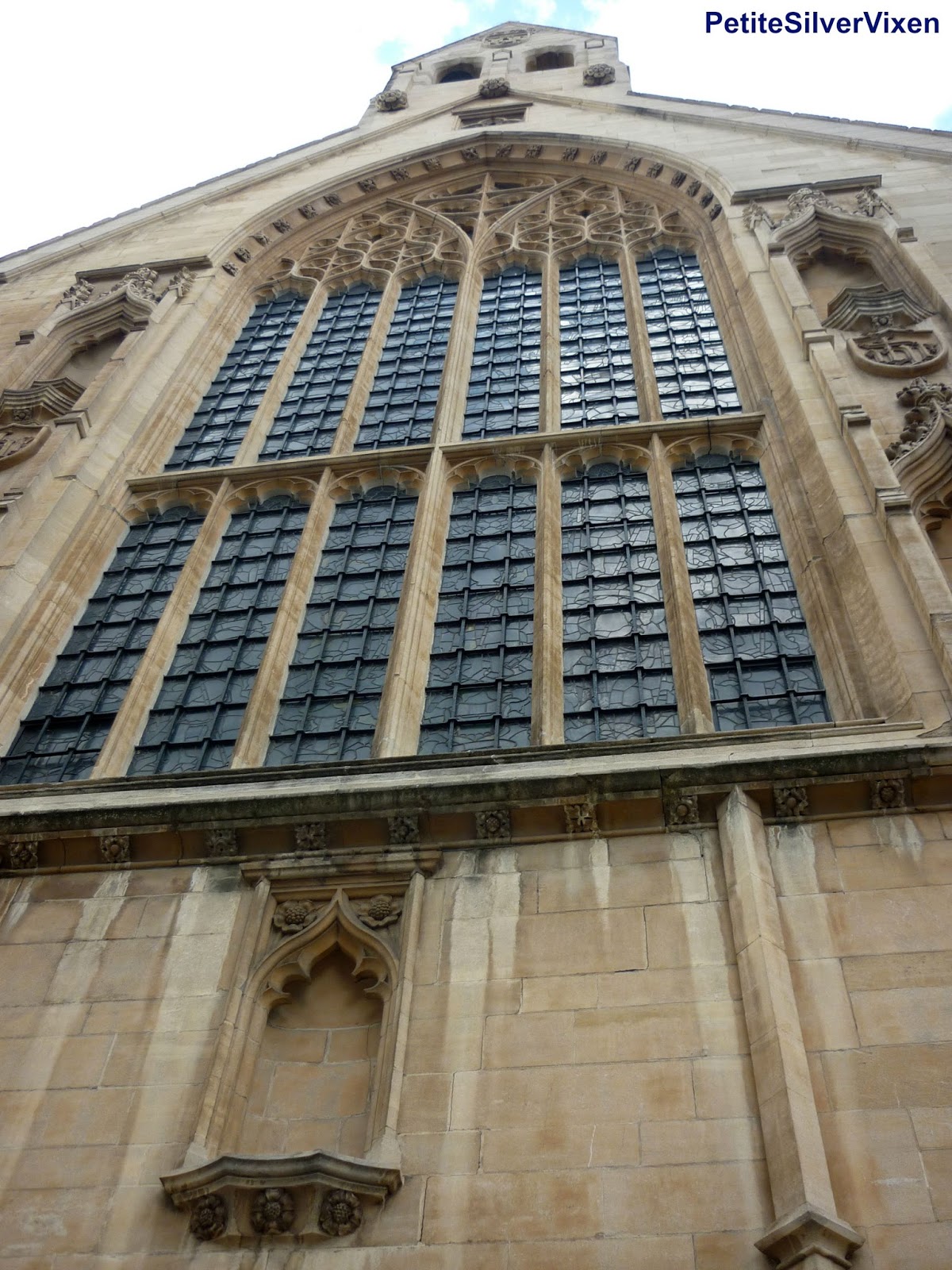 By now you’re probably thinking, hang on a minute, where does the physics bit come in to all of this, or have you lured me in on false pretences?  I promise and I give.

The physics…
Across the road from us were the buildings of Imperial College, part of London University.  Imperial is TallBrownFox’s alma mater and this is the Blackett Laboratory, where he spent many hours swotting and experimenting during his physics degree.

Professor Patrick Blackett, in whose honour the laboratory is named, was an English experimental physicist, who won the Nobel Prize for Physics in 1948, for his investigation of cosmic
rays using his invention of the counter-controlled cloud chamber.  So there!  Over 20 Brits have won Nobel Prizes for Physics; Peter Higgs (he of the Higgs boson particle reknown), being the last recipient in 2013.  It’s not all jazz hands, high notes and high heels here.

Doesn’t look very inviting compared with Holy Trinity, Brompton, does it?  But not so fast.  Look closely and you’ll see a unique, slate mural with formulae engraved on it, all relating to modern physics. 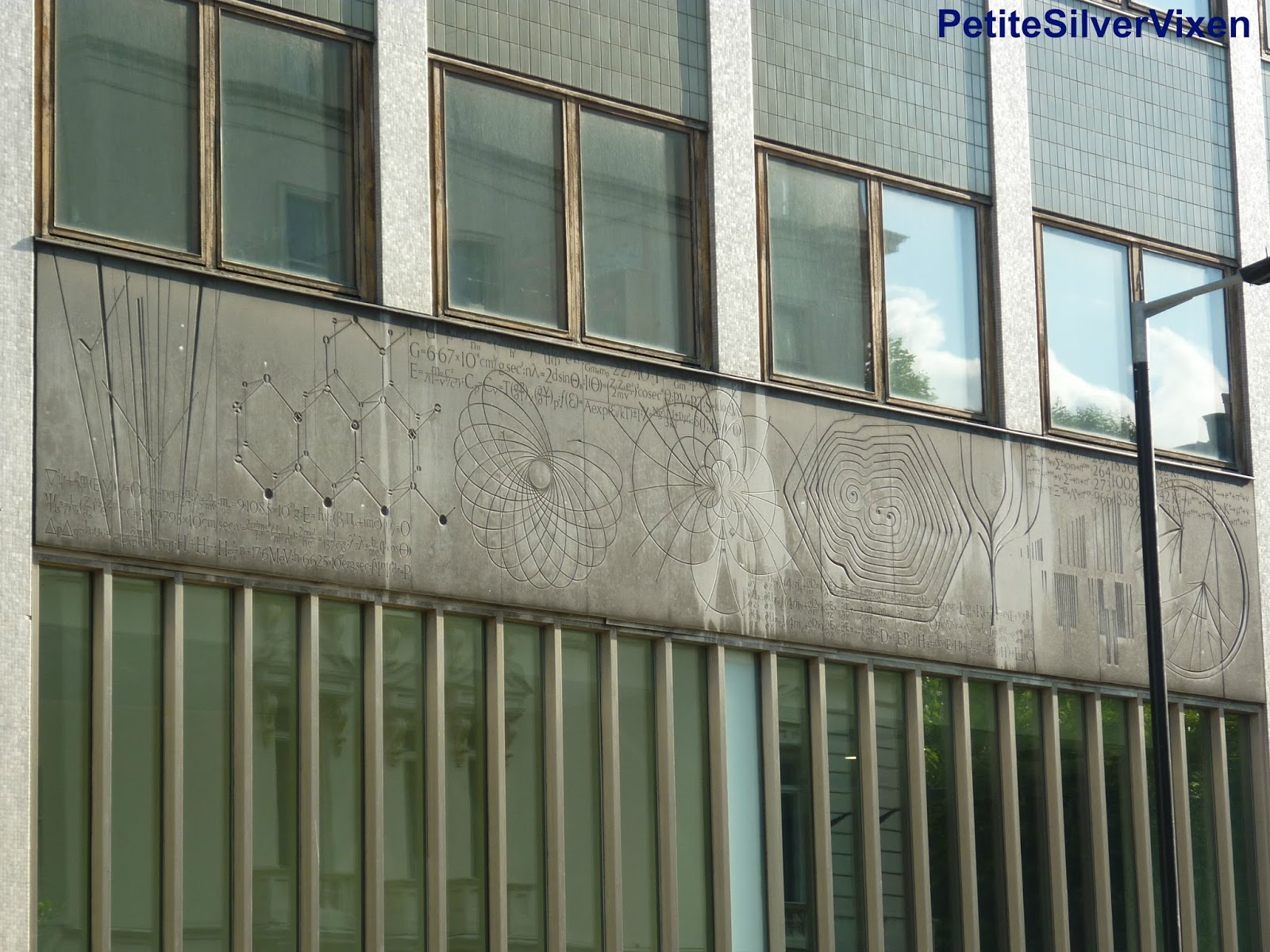 All this photographing made me hungry.  We’re old hands at this promming lark as we try to go at least once most years.  We’d sensibly brought a ‘queue pic-nic’ with us, like many others in the queue.  I’d like to say that I’d purposely matched the colour of my Vans to the hues of the cherries but it was pure fluke. 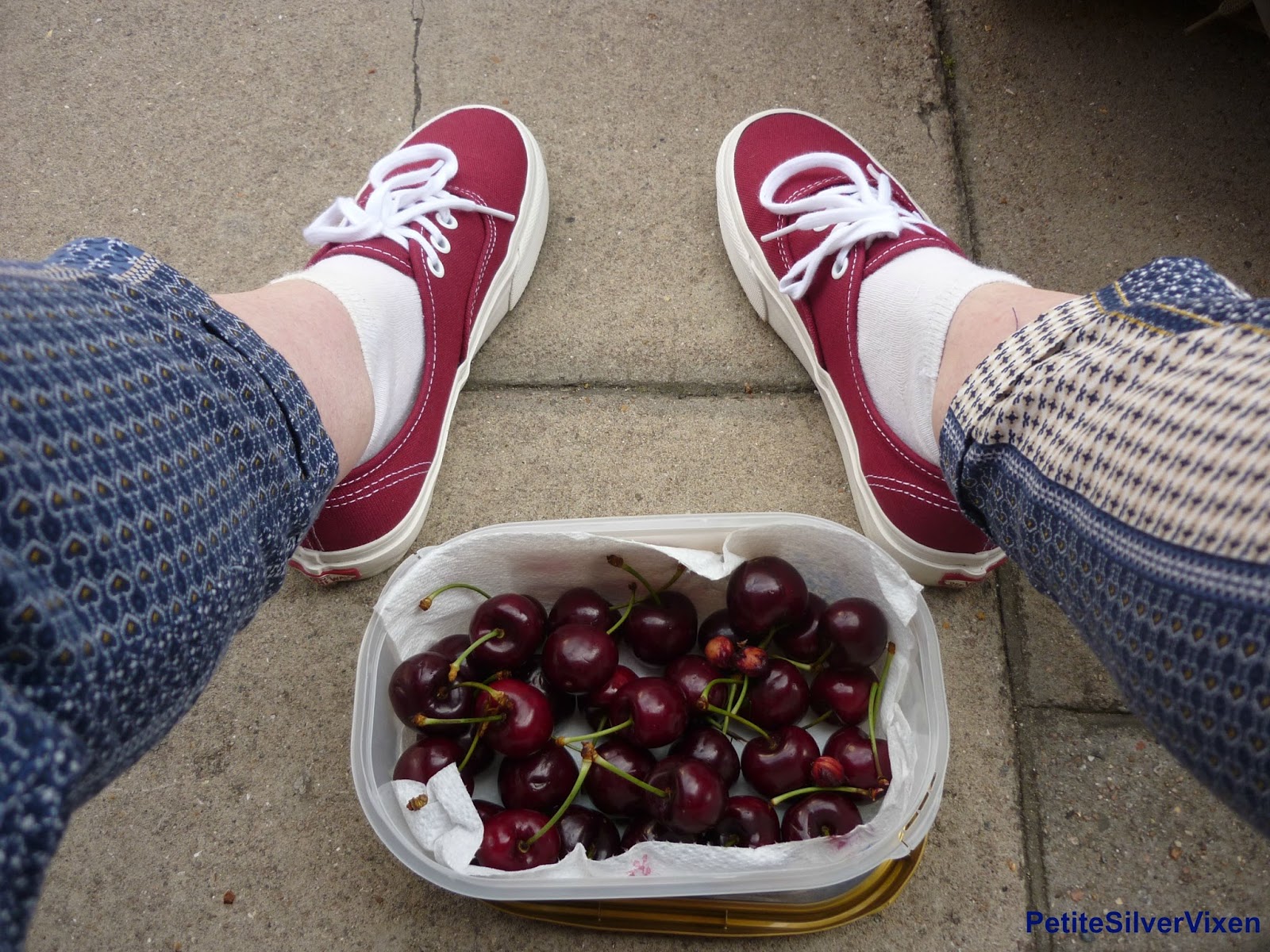 As the queue edged nearer to the ticket door it gave us a chance to appreciate Prince Albert perched high on a his plinth, against the graceful curve of the Royal Albert Hall and the blue sky.  He certainly has a bird’s eye view up there.  I hope by now he’s developed a head for heights. 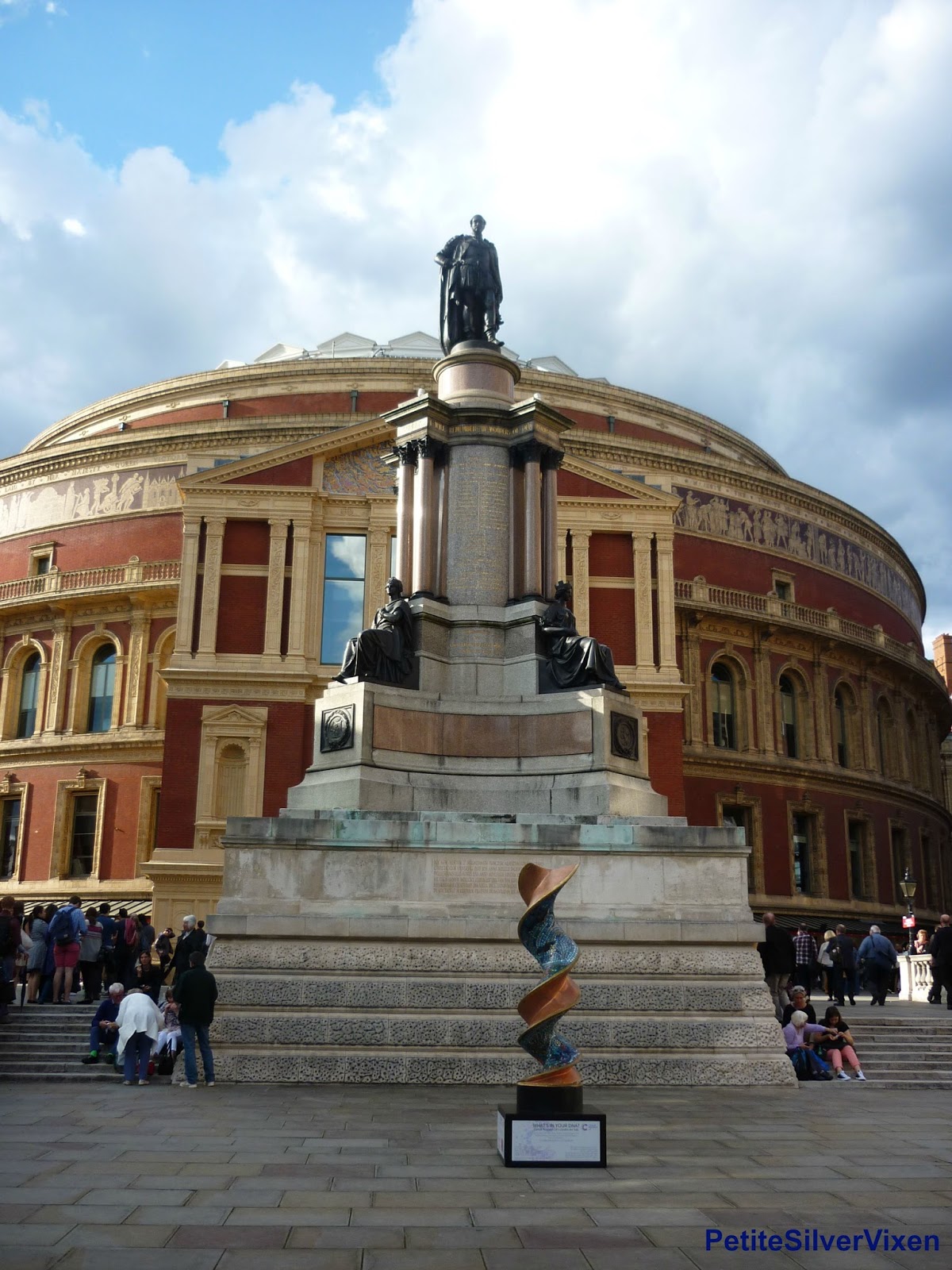 We slowly snaked our way forward, admiring what a striking building the Royal Albert Hall is.  So many architectural features to absorb.  In the early evening light, the columns and portals have a golden glow about them. 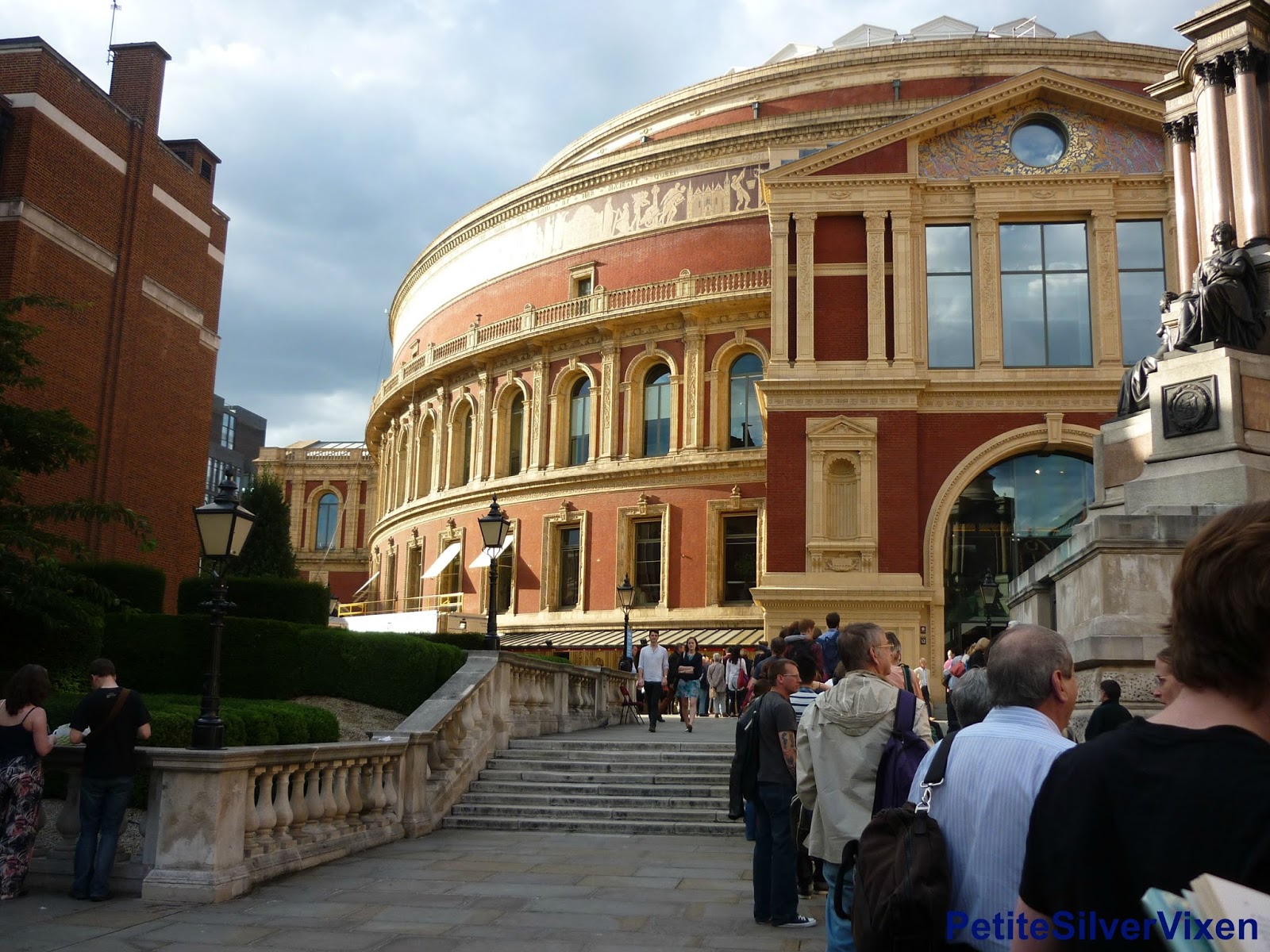 Finally, the holy grain: A TICKET!  No. 275 out of 500!  And yes, the standing day tickets really are only £5.  Best buy in London.  It’s easy to fall into the trap of thinking classical music or concerts are prohibitive in price but promming is cheaper than going to the cinema!

And if you can’t get to the concerts, tune into BBC Radio 3.  You can hear them live every single night of the season and quite a few get broadcast on BBC4.  Worth the licence fee alone, in my opinion to all those naysayers. 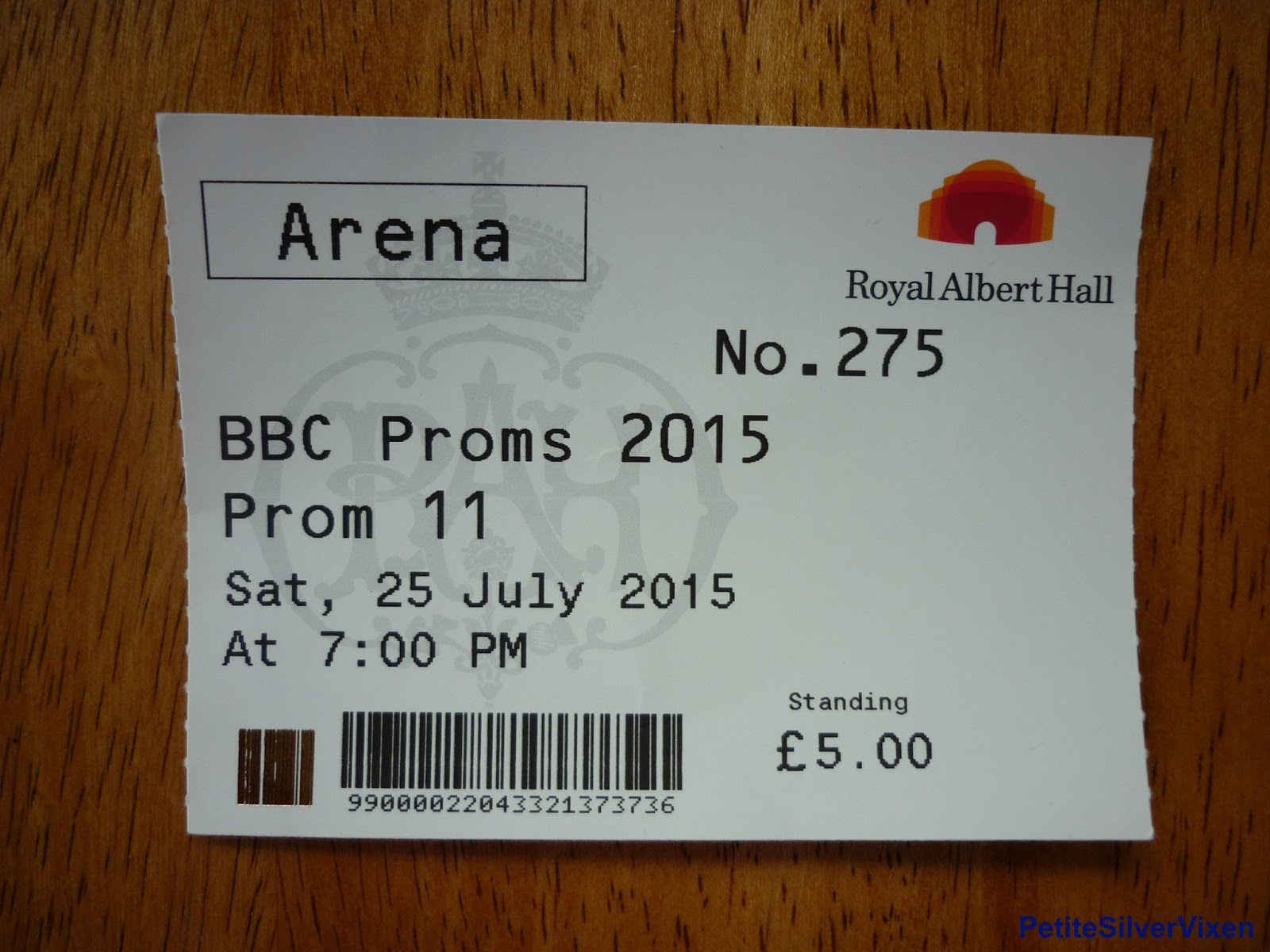 Once inside, we claimed our spot in the arena and were lucky enough to be pretty much in the middle, central to the stage.

However, I’m not quite a diehard prommer as my Mum was.  When she was
a music student, one year she bought a Prom pass and went every, single
night to the Proms.  She prommed the WHOLE season!  Didn’t miss one concert, stood every evening. 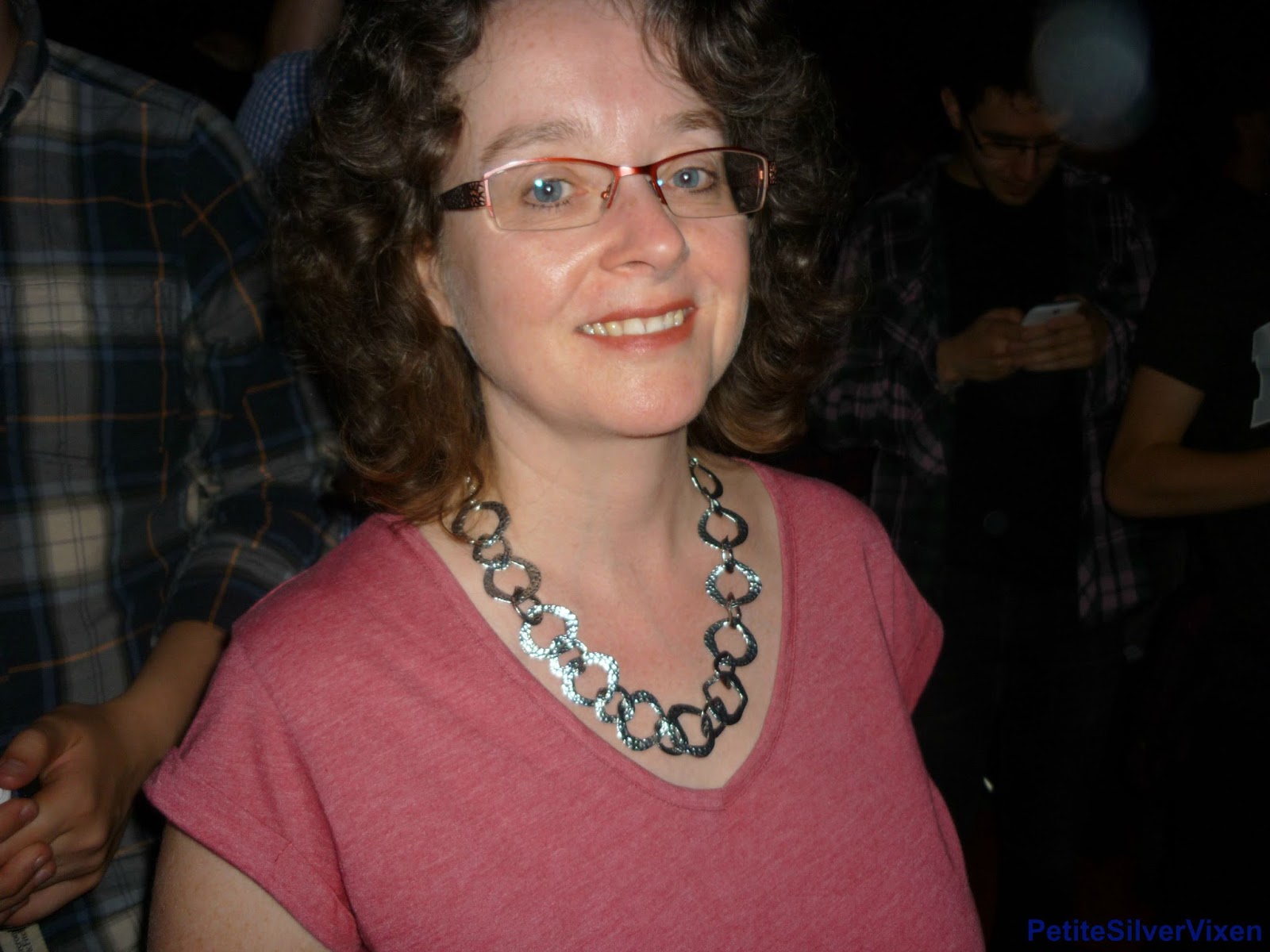 And now for a little more physics for you.  If you’re wondering what those “flying saucers” or blue lit “mushrooms” are hanging from the ceiling, above the proms canopy, they’re fibreglass acoustic diffusing discs!  They were installed
in the roof in 1969 to reduce echo in the Hall.

And we nimbly leap from physics to maths.  The organ, whose pipes you can just make out towards the bottom left, is the second largest pipe organ in the Britain with 9,999 pipes.  Yup, I really did count every single one.  Only Liverpool Cathedral has more, at a staggering, 10,268. 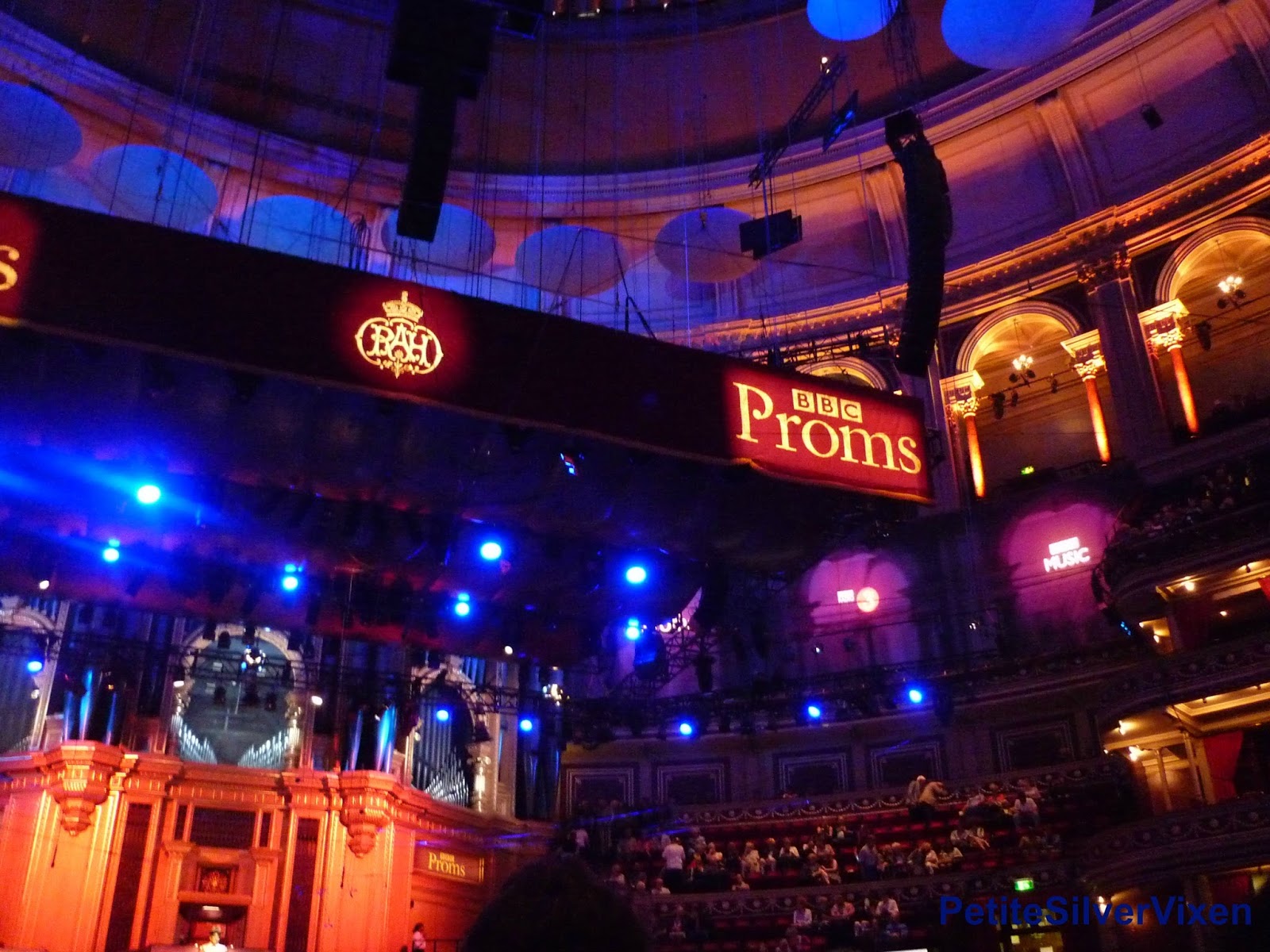 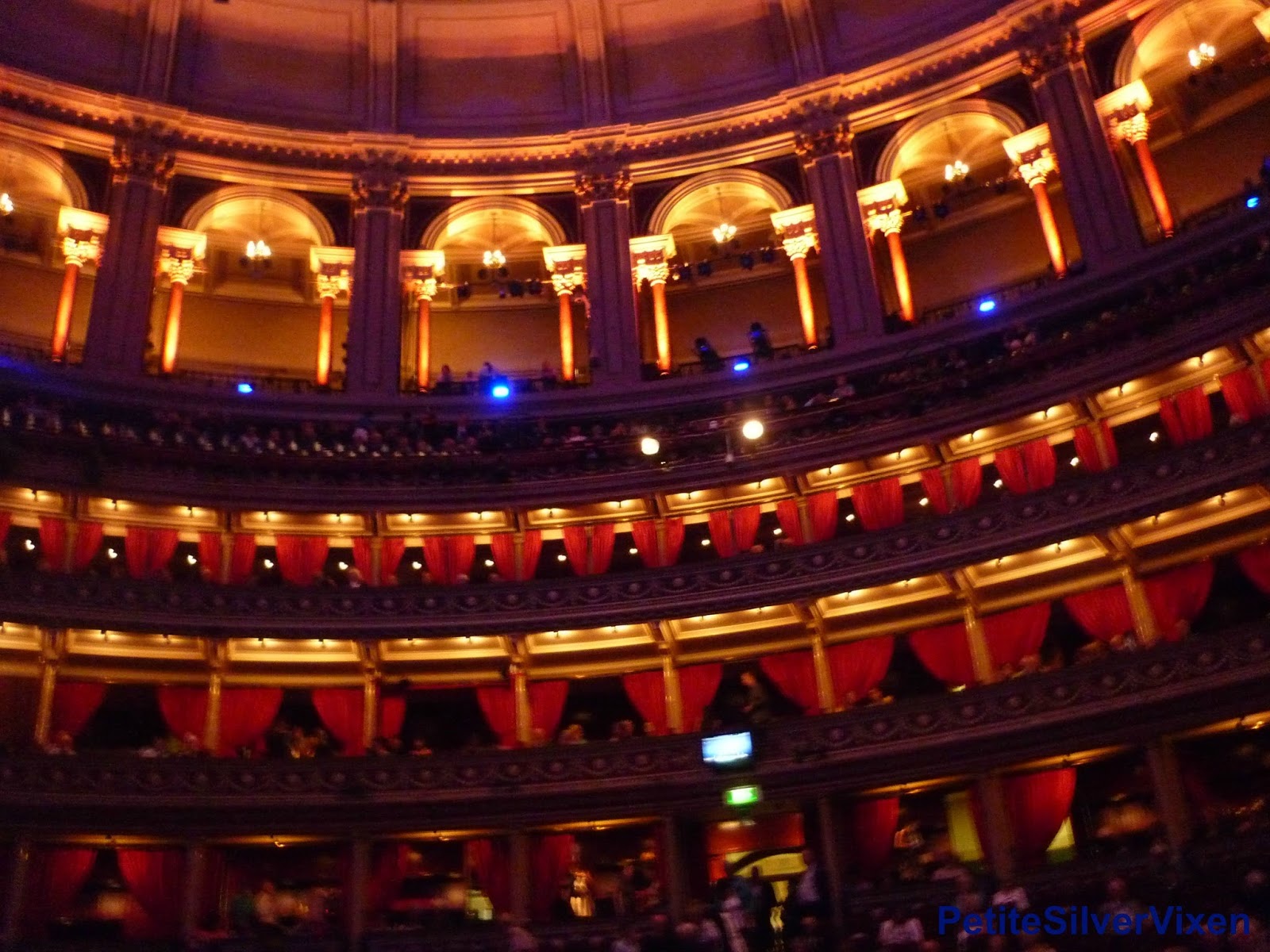 One of the many aspects I love about going to live performances and particularly when there’s an orchestra is the expectation of what is about to come.  There are certain rituals which happen, which always fascinated me as I child when I was taken to classical concerts by my Mum.

The atmosphere begins to change as the musicians take their places on stage and you hear the orchestra tuning up, as below. 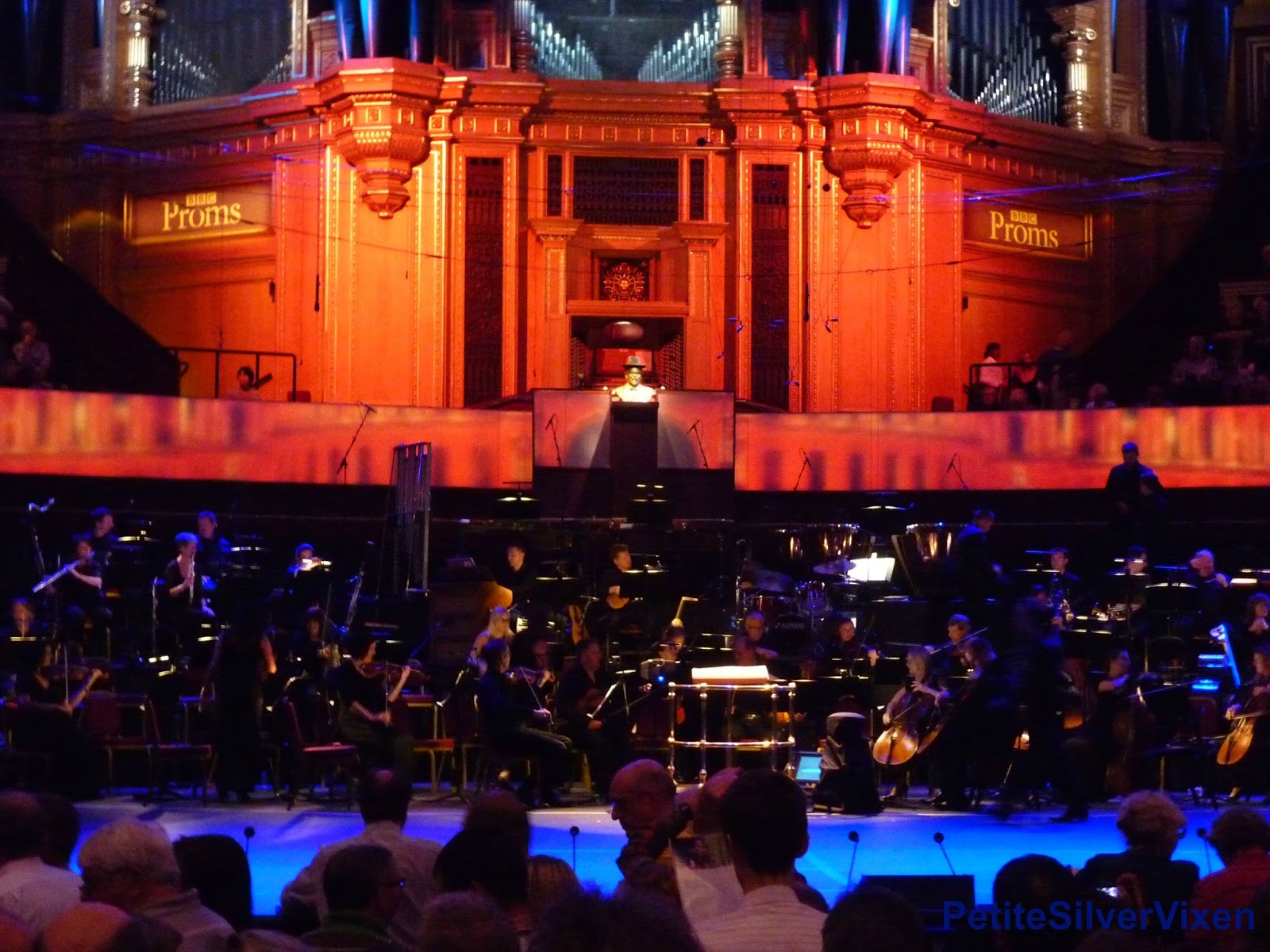 The orchestra then stands to greet the conductor, who always shakes the hand of the leader of the orchestra, who is always the first violinist.  That night, David Charles Abell was conductor (he’s also one of the score’s arrangers) and he’s shaking hands with Charles Mutter. 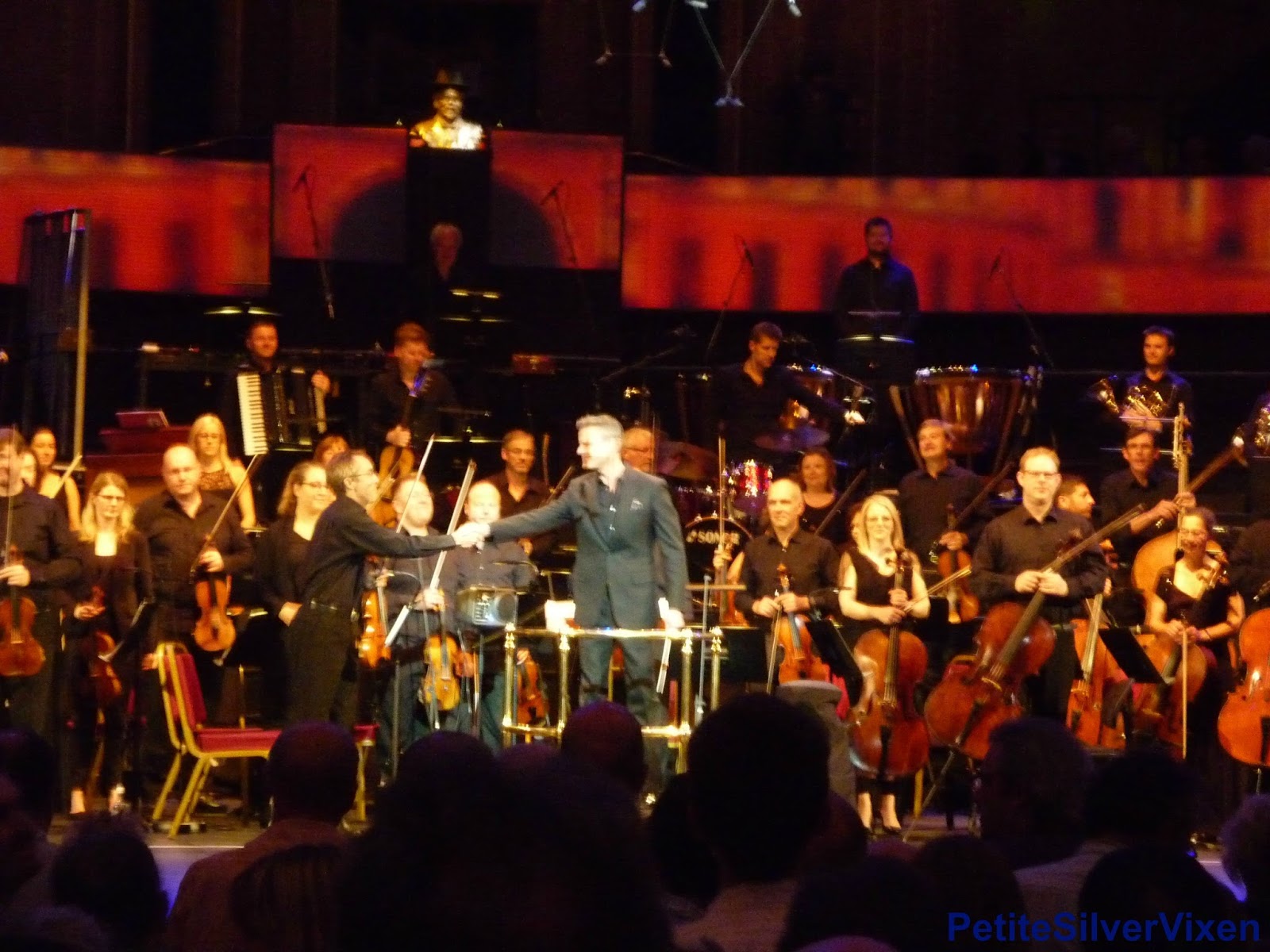 Then the orchestra sits down, the audience settles, quiet descends and there are a few moments of stillness which hang in the air.  You can hear a pin drop.  The conductor will give the first beat and the performance is underway.

Can you see what looks like a man above the orchestra by the red coloured screens?  That’s a bust of Sir Henry Wood, the founder-conductor of the first ever Prom concert in 1895.  He usually resides in the Royal Academy of Music, (my Mum’s old alma mater).  Every season he’s loaned to the Hall and is positioned where he can gaze benevolently over the musicians and Prommers. 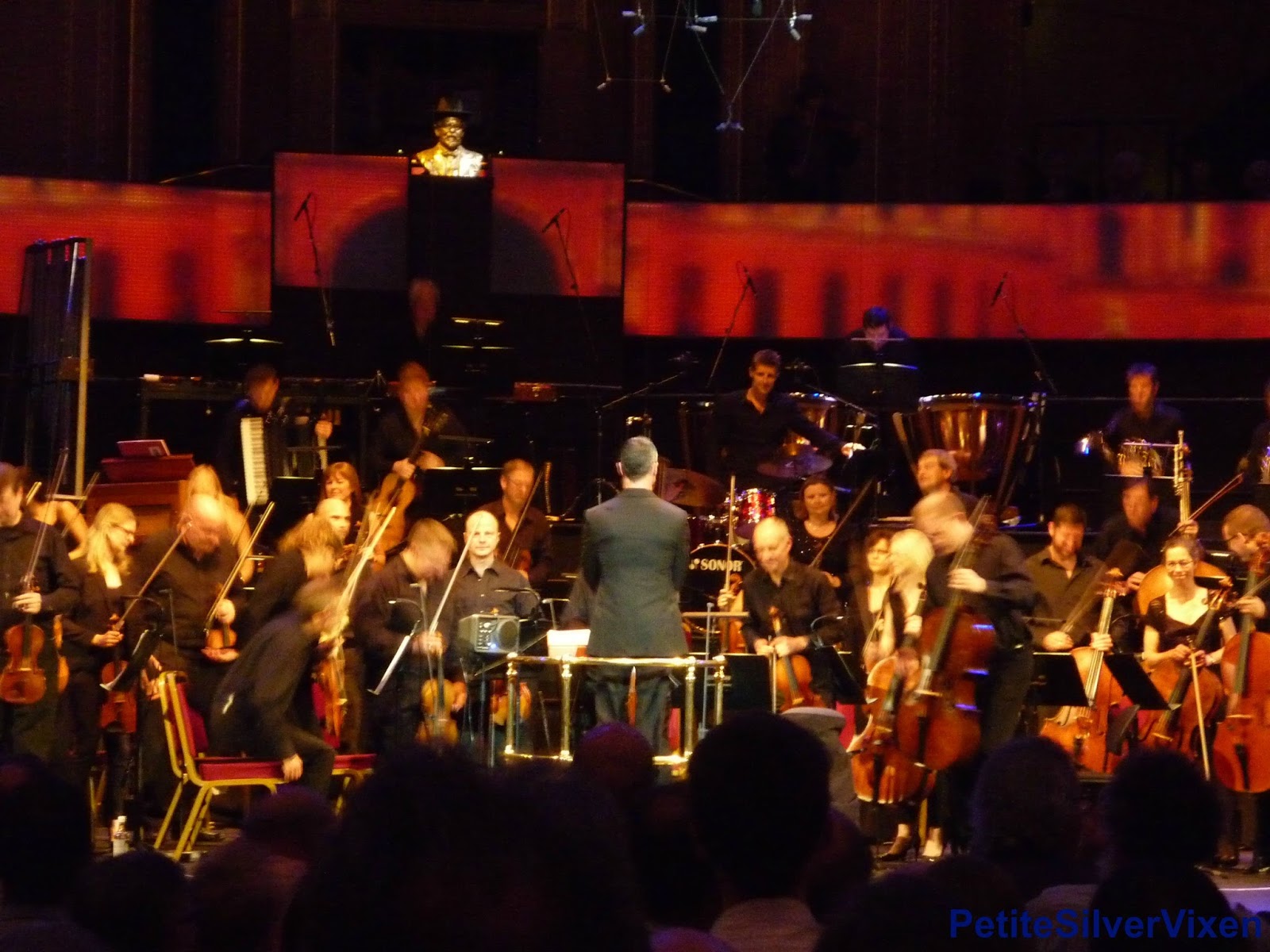 Photography obviously isn’t allowed during the performance but no reason not to take a few at the end of what was an inspiring performance.  The chorus rightly savouring the appreciation of the audience. 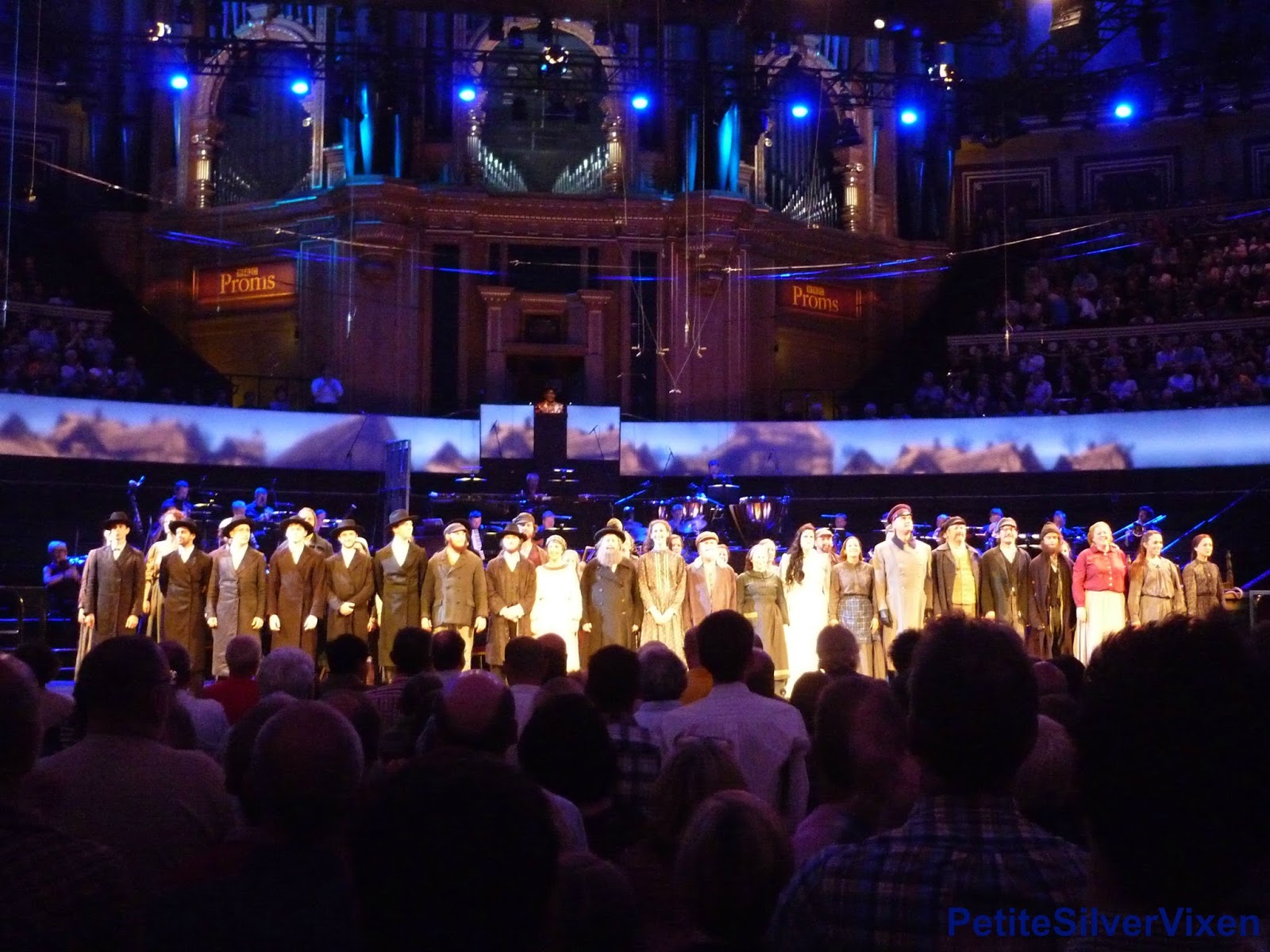 And here’s the man himself – Bryn Terfel – the great, Welsh operatic bass-baritone, who played Tevye (tall chap in the centre, wearing a cap).  I’ve never seen him singing opera live as I’m not into that genre – not my musical cup of tea.  I’ve only been to two operas in my life and I can’t imagine I’ll be going to many more.

However, I do enjoy musicals and he was a superb Tevye.  When an actor has put their mark on a role in the way that Topol did with the part, it can be very difficult to disassociate their interpretation from someone else’s but not for one moment during the performance did I think/hear/see Topol.  Bryn made it his own – even down to that famous line towards the end when Tevye says; 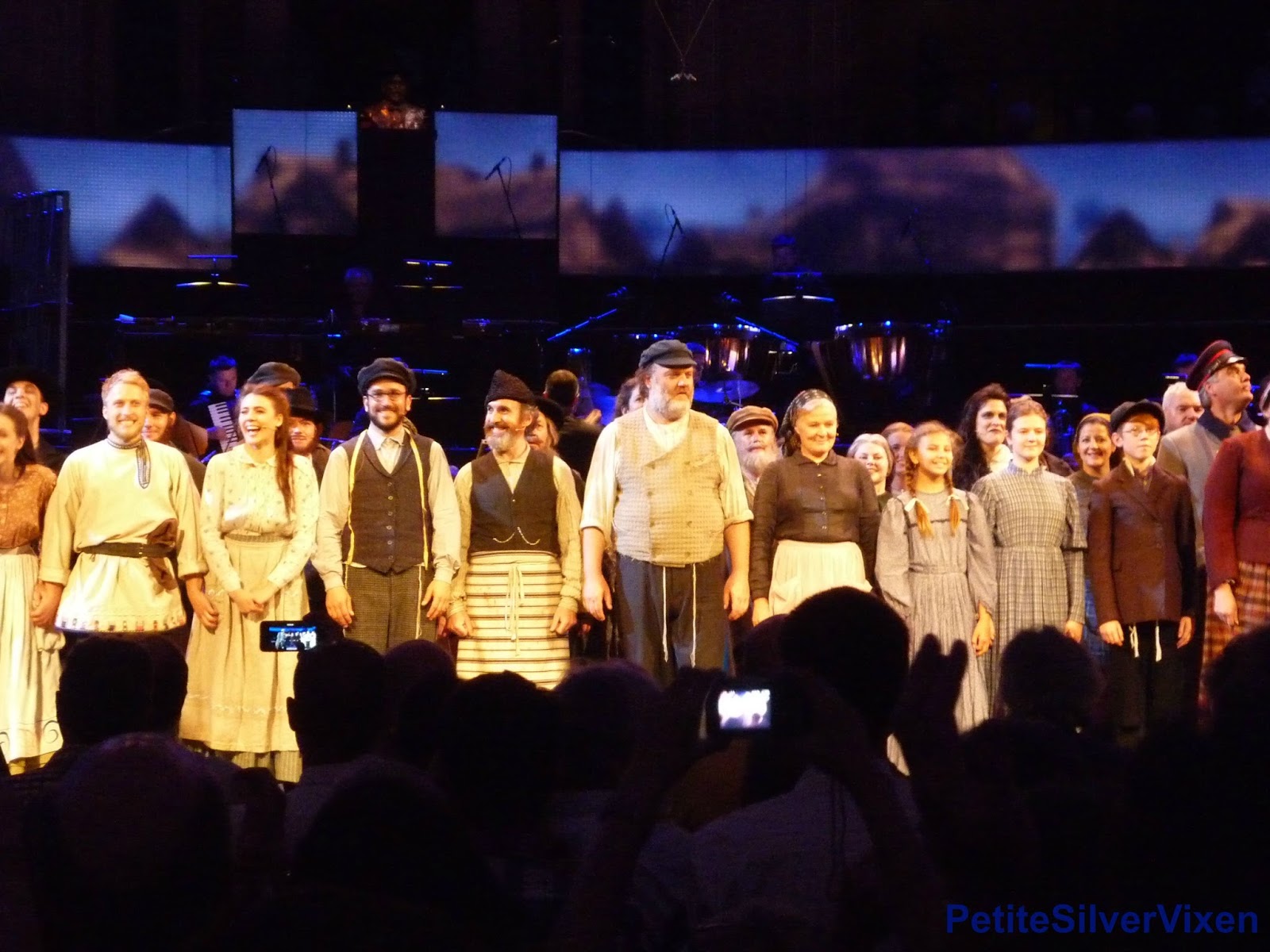 When the whole cast sang the iconic number from the musical – Tradition – for the finale, it was electric.  A moment when the hairs on the back of your neck stand up.  You could feel/hear the audience being completely carried along by the sound of it. 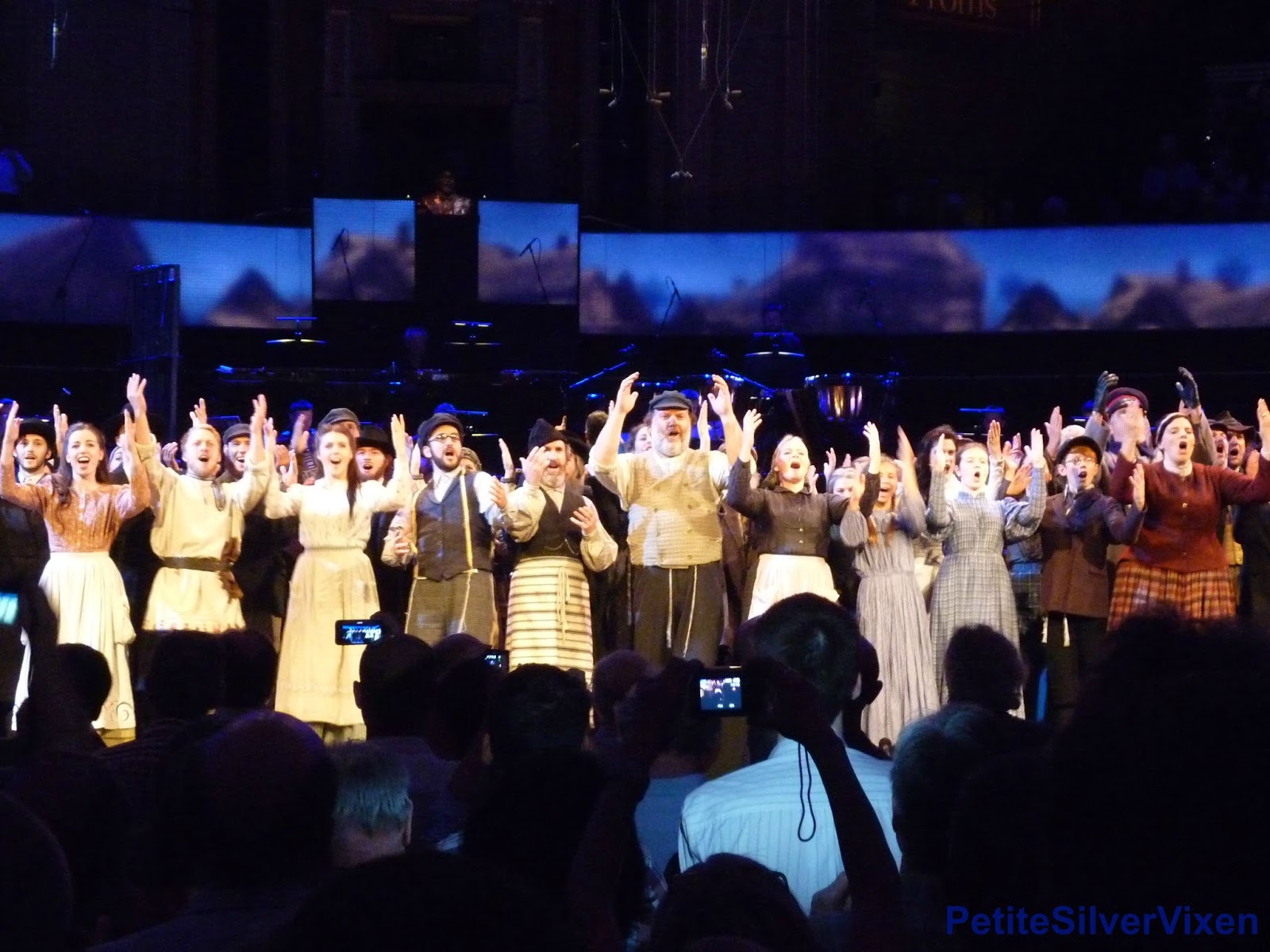 A lovely moment when the cast acknowledged and invited the audience to acknowledge the fantastic musicians who accompanied them.

Bravo to the BBC Concert Orchestra who never fail to disappoint.  This was their first performance at the Proms this season; they’ll be making a few more appearances at the Proms and on the Last Night of the Proms on 12th September, they’ll also perform in Hyde Park at The Proms in the Park. 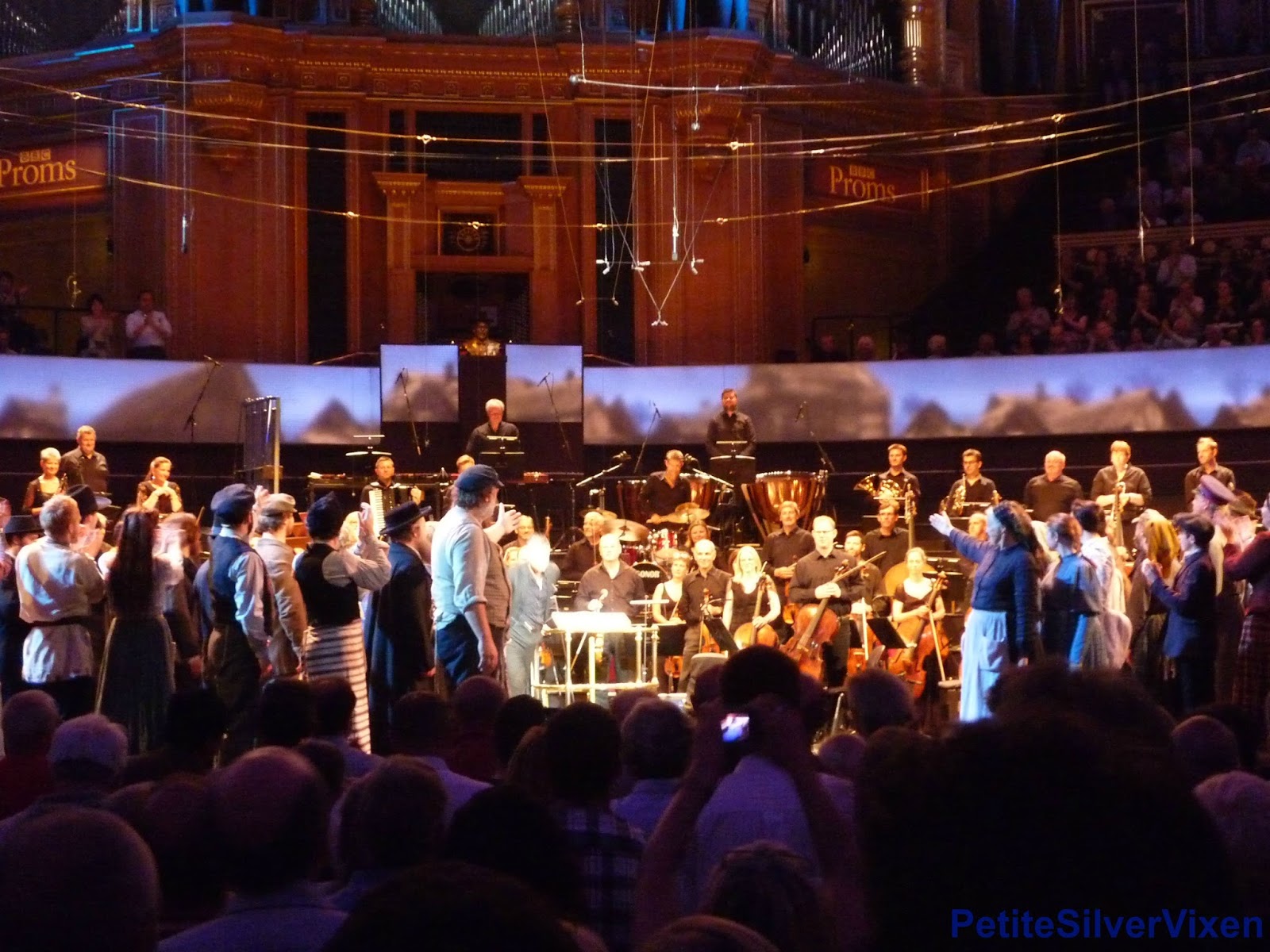 After a wonderful evening of extraordinary musicianship, TallBrownFox and I bid a heartfelt goodnight to the Hall and shimmied our way home, singing 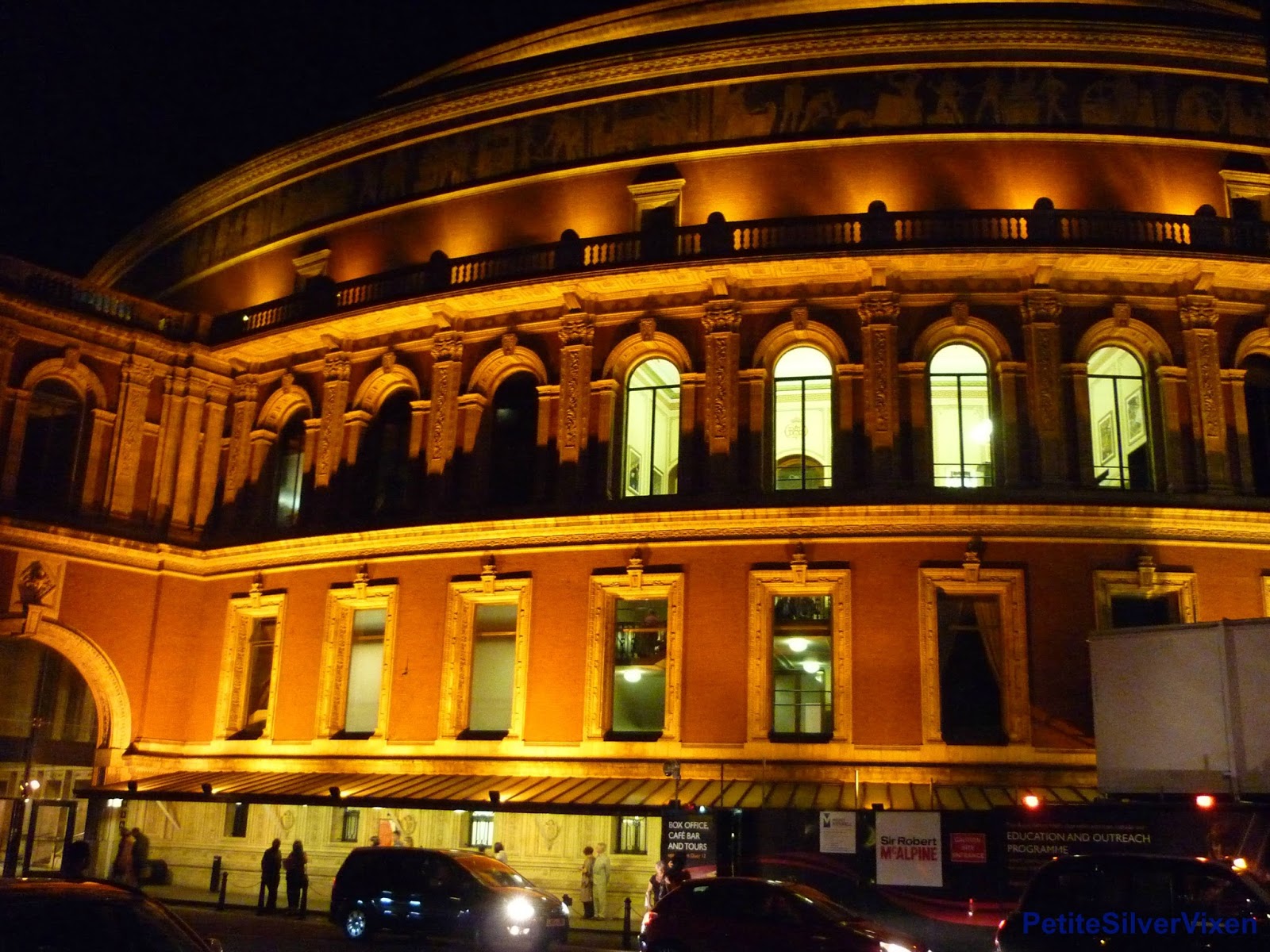 Have you ever been to The Proms?  Have you wanted to go but been hesitant?  I hope this has given you a flavour of what to expect and encourage you to go to one.