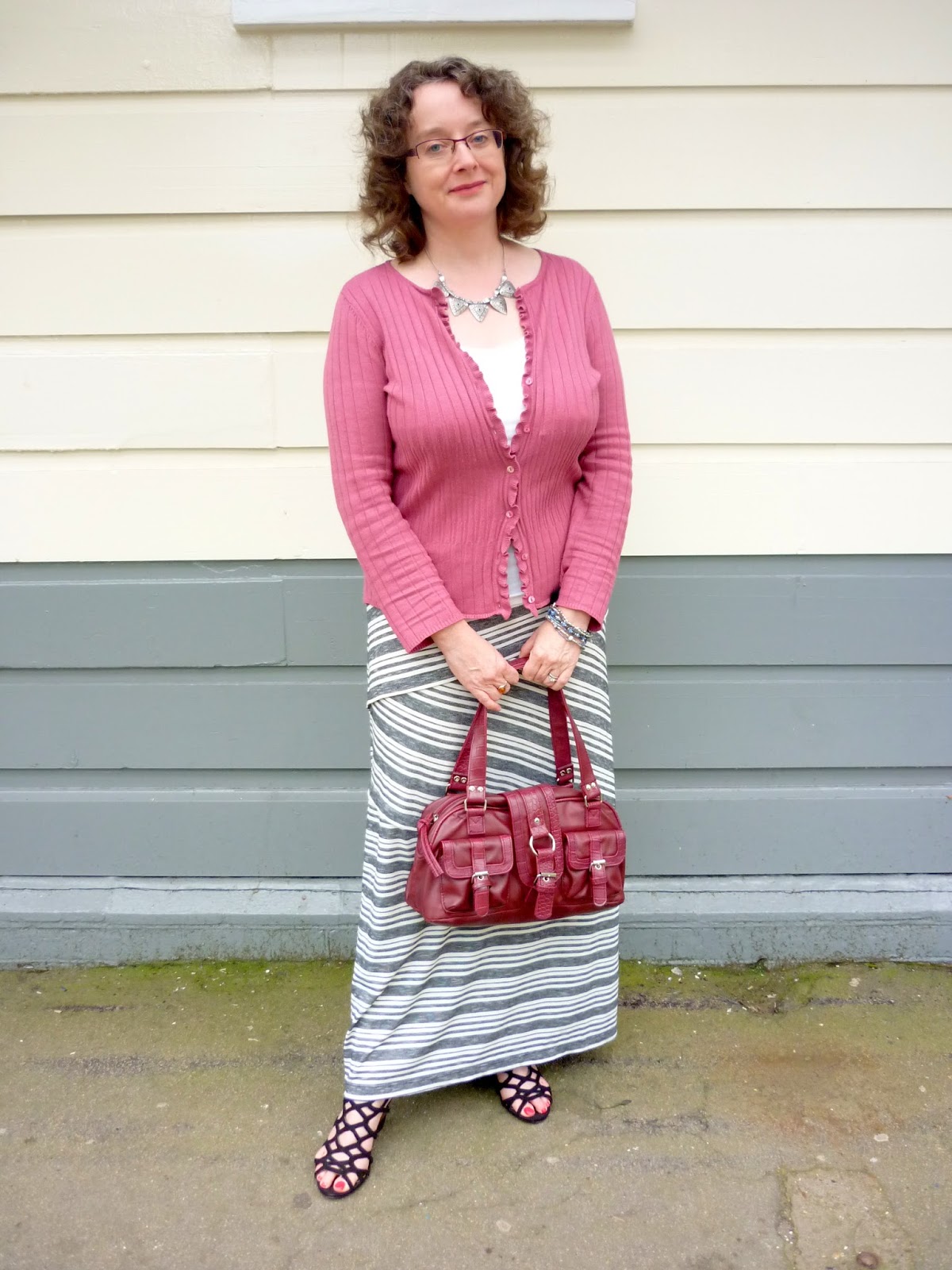 One of my oldest Pilates clients is a 76 year old, retired Professor.  He’s not the oldest client I work with; that honour goes to someone TEN years older – an 86 year old gent, who still plays a weekly round of 9 holes and who can squat better than a 20 year old!

My 76 year old Professor has been coming to my classes for over 2 years now, having never really exercised before.  He so enjoys the class that last Saturday he invited us all to an informal buffet lunch that he and his wife were hosting for a few friends to celebrate, in his words, ‘the ending of summer’.  It would be ‘a laid back affair’ he said and I immediately knew that my ‘laid back’, graphite grey skirt would fit the bill. 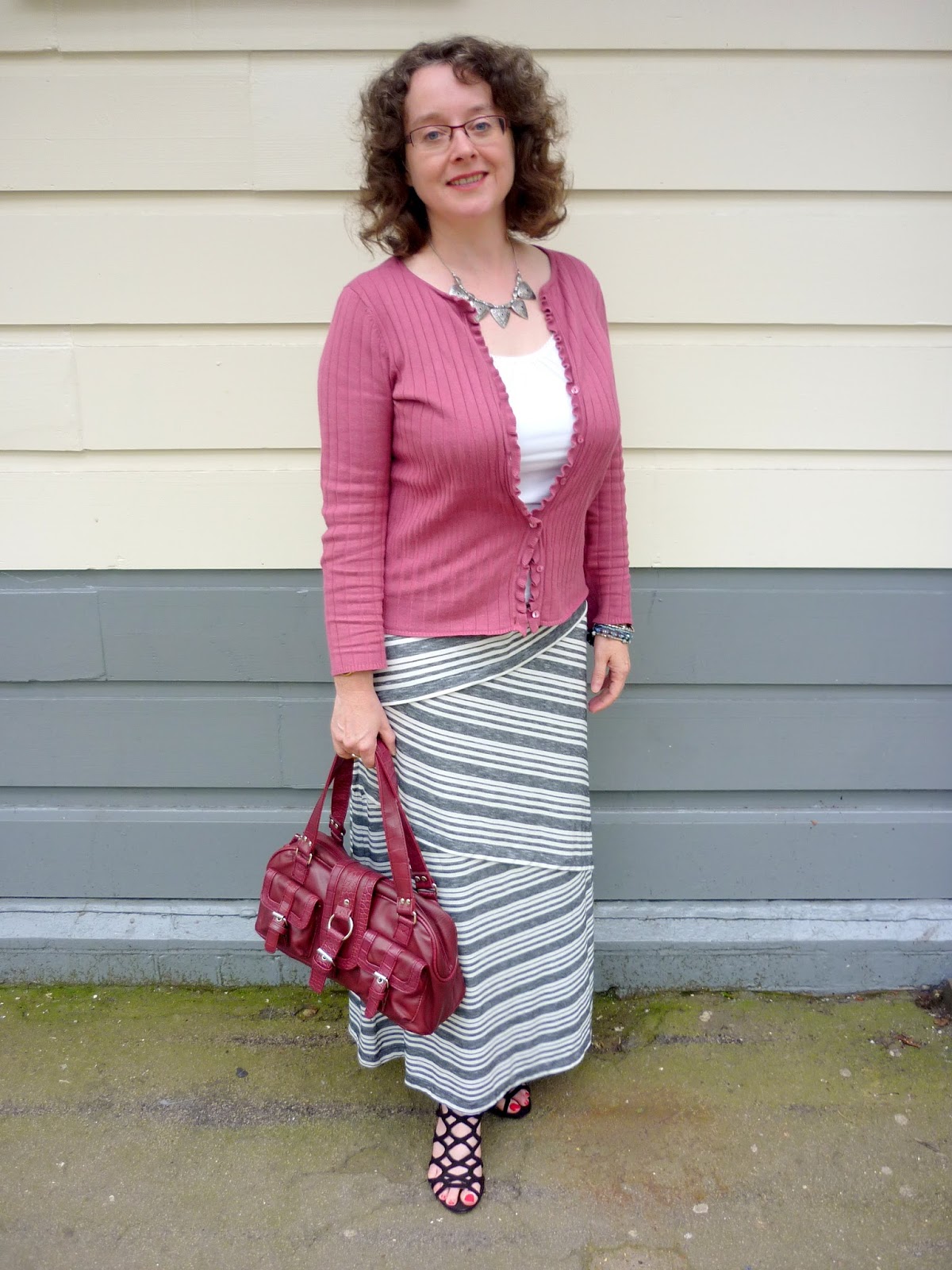 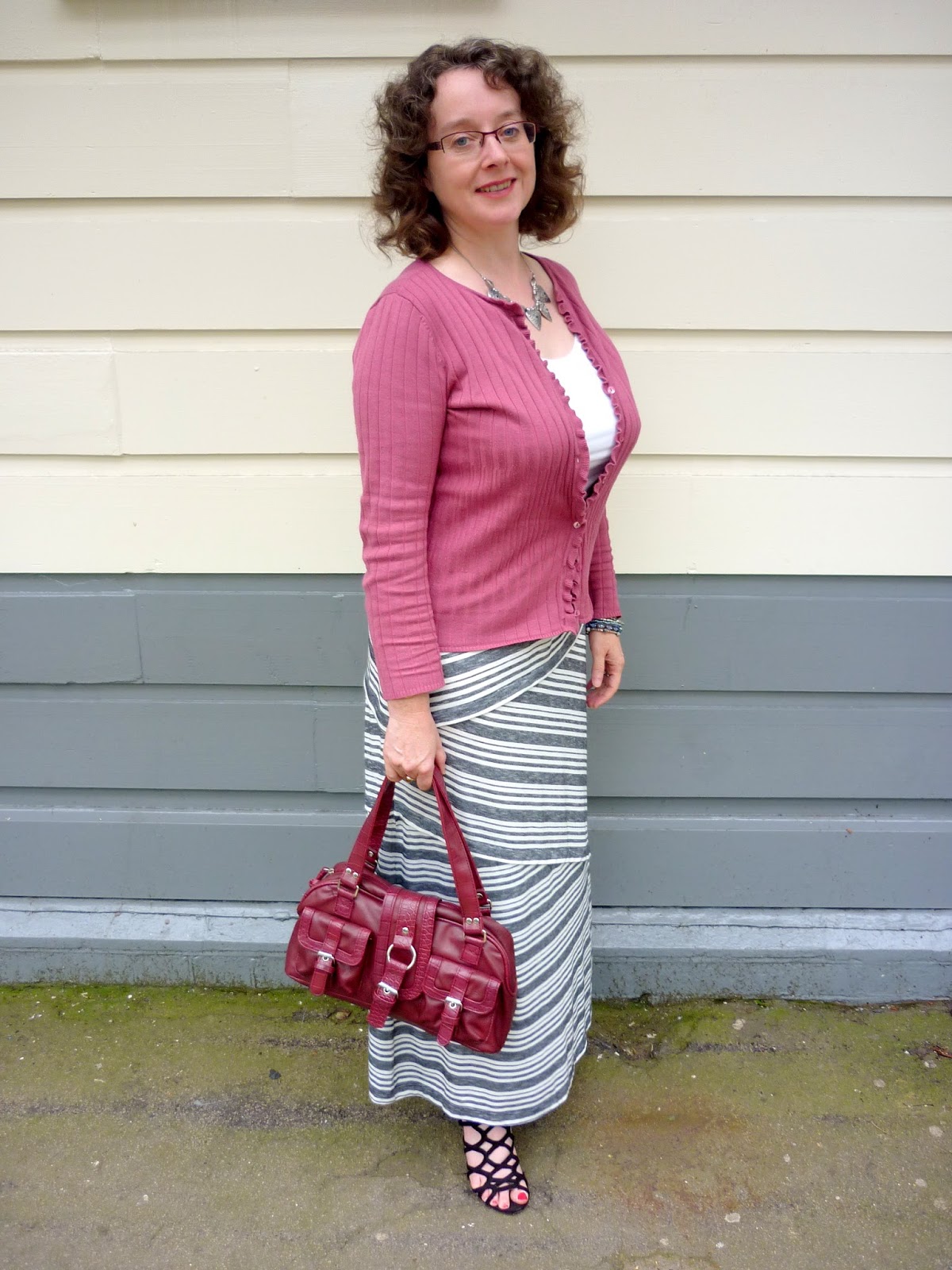 It’s a beautiful colour but it’s an odd top in that it’s not quite a cardigan but it’s too thick to be counted as a long sleeve top. The temperature and what you wear under it have to be right, otherwise you feel you’re in sauna wearing it or you’re in an igloo if it’s a chilly day.  But on a late Summer/not quite Autumn day, with a cami top underneath, it was just right.  I’m chuffed I’ve created another outfit by teaming old with new. 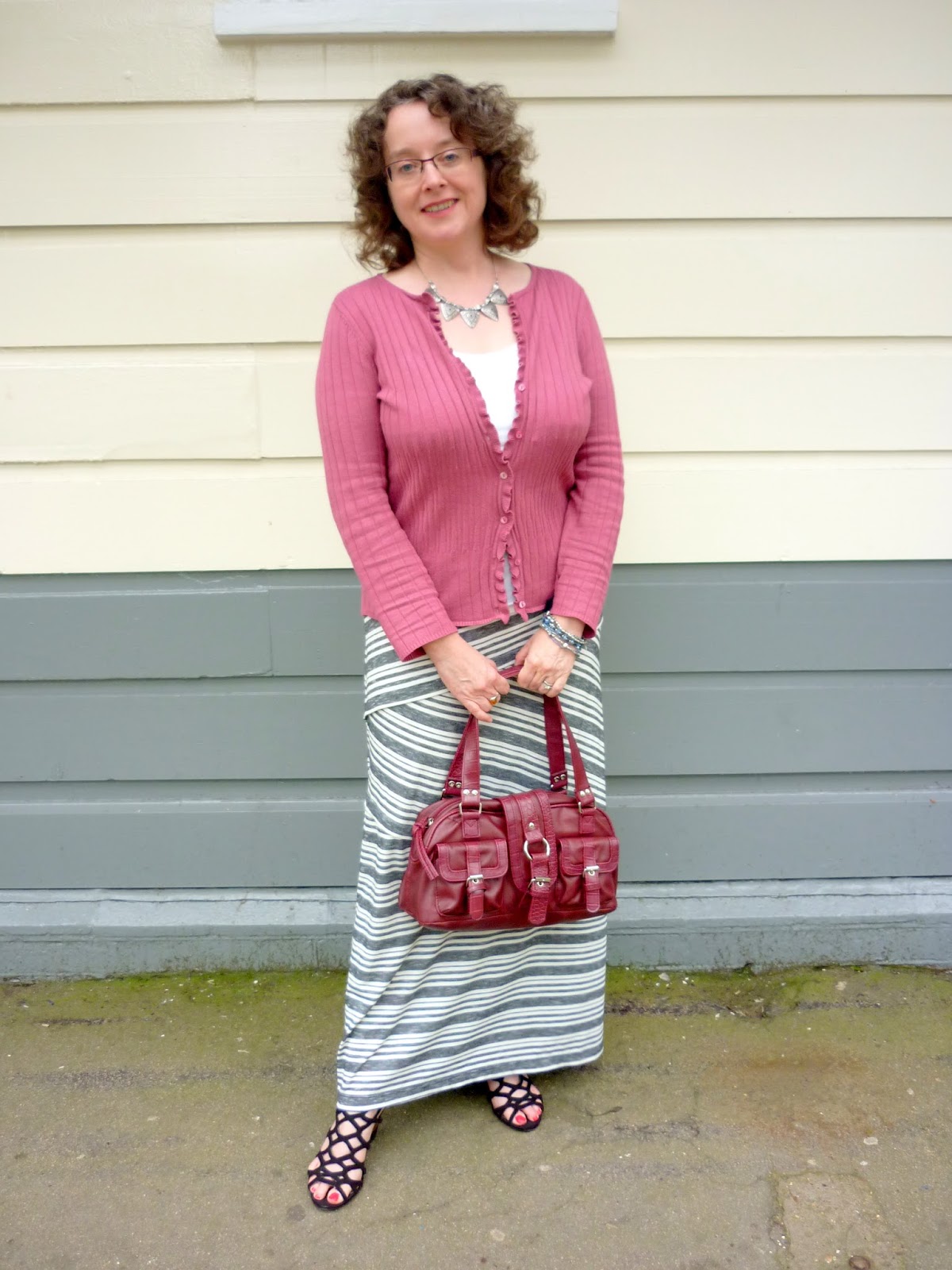 Back in early Spring in one of my wanderings in TKMaxx, I was rummaging around the skirt rails.  The branch doesn’t tend to have many skirts but on this occasion they obviously had recently received a delivery and there was more than ususal.  As I’m something of a magpie I noticed a sparkly black, pencil skirt which was winking at me.  I was super excited to see it was a Reiss skirt and even more excited at the price, which definitely wasn’t a Reiss price!

Next to it on the rail was the graphite grey skirt.  It was just hanging out, unconcerned with what was going on around it; so laid back, it was almost falling off the hanger.  The kind of skirt that if it had a school report would say; ‘Must try harder’.  But somehow it still found it’s way into the changing room with me – sneaky thing!

Reiss skirt was tried on first and that was when disappointment struck.  I could barely walk in the thing it was so tight.  Taking a couple of steps outside the changing room, I did a very good impression of a geisha girl walking.

This skirt could only be worn to places where no sitting or using stairs would be involved, unless I wanted to hoik the skirt up into my knickers in order to do so.  A step too far, me thinks. 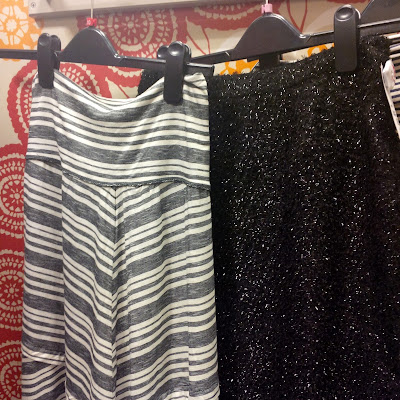 Back on the hanger it went.  Next up, graphite grey, maxi skirt.  Once on, I suddenly was standing taller and sashaying around the changing room, which isn’t easy in a confined space where there’s no room to swing a cat let alone a sashay!

A bias cut is always flattering, otherwise it could look like I’m standing in a column made of hula hoops.  The pattern isn’t really block stripes.  It’s as if someone has taken a graphite pencil and drawn lots of thin lines, one on top of each other, to give the impression of stripes of varying thickness.

It has an uber deep waistband which is uber comfortable to wear.  It just glides over your hips and sits snug around the waist, rather like a cumberband but without the discomfort of feeling your organs are being slowly crushed to death.

Although I call it the ‘laid back’ skirt, in reality, it defies its appearance and description.  This is a garment that will work across all the seasons; the kind I welcome open-armed into my wardrobe.  I’ve worn it many times this summer with camis and tees.  It will work in Spring and Autumn with layers and I know with a chunky knit, woolly tights and biker boots I’ll be able to wear it on crisp Winter days. 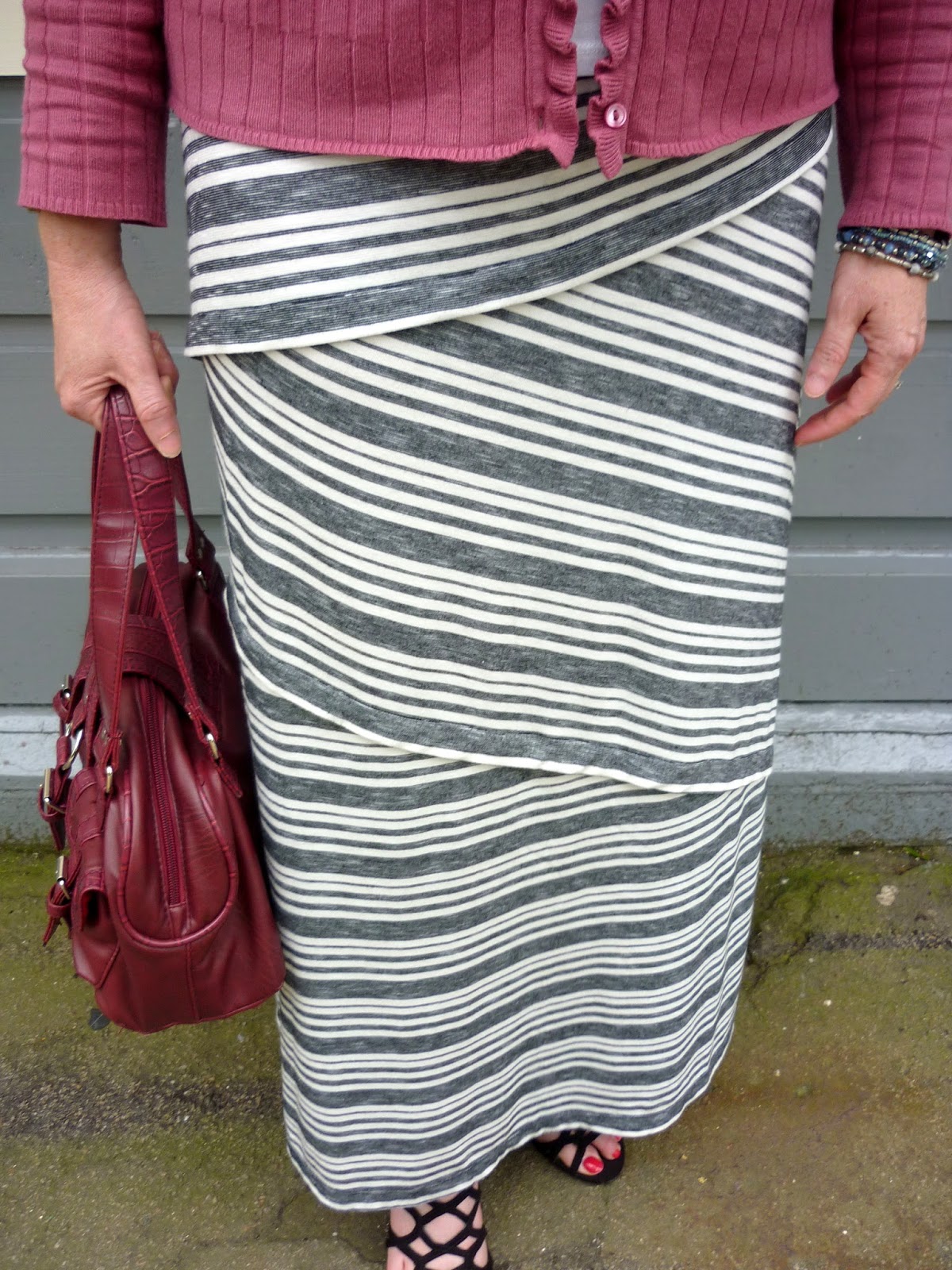 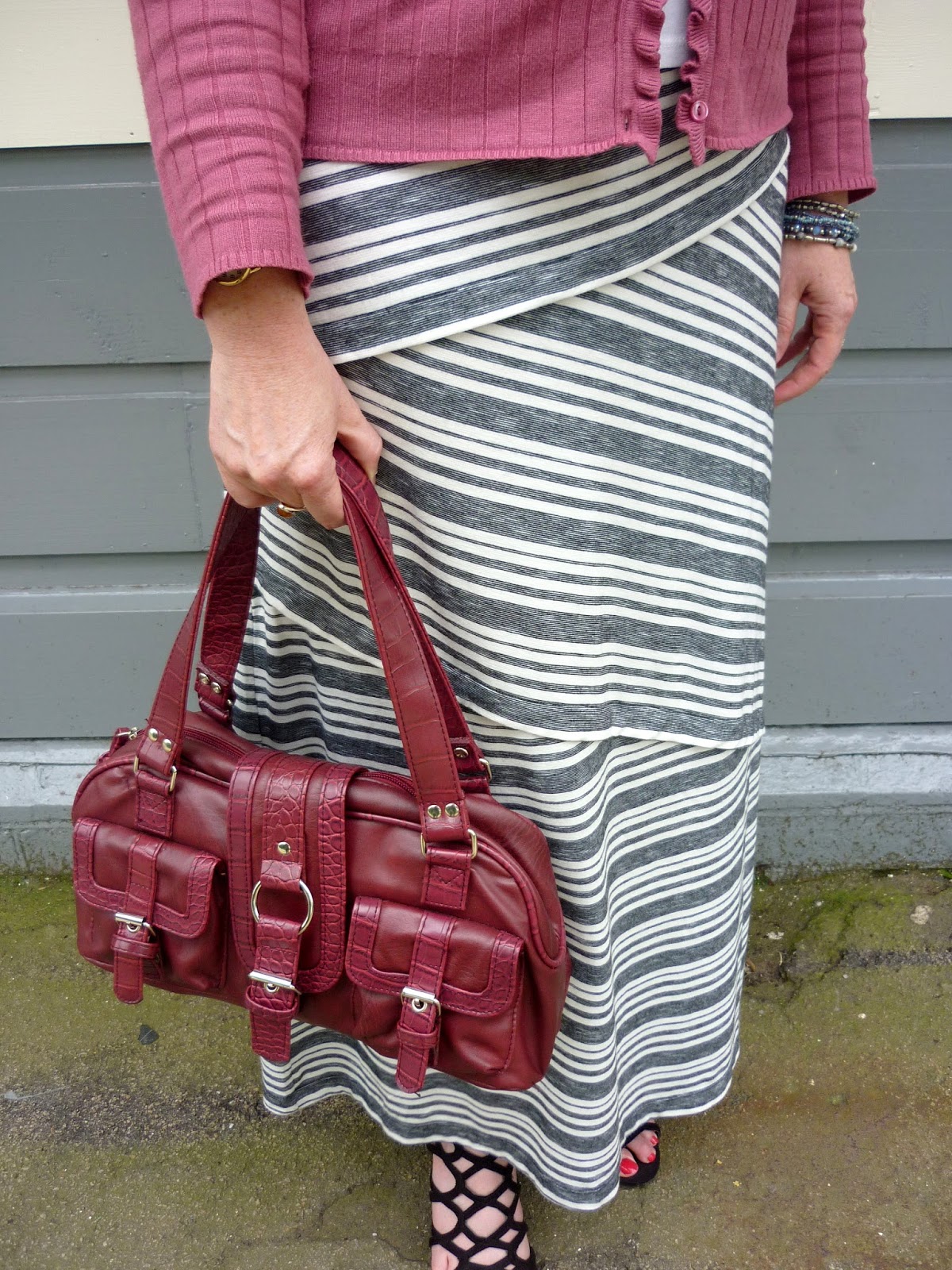 As the skirt is cut on the bias, creating diagonal lines, I thought it’d be fun to wear this triangle necklace!  I wish I could say that I bought it somewhere exotic, such as an Egyptian souk or that it’s been handed down through the family and is centuries old, but no.  New Look, Moorgate branch, City of London is as exotic as it gets!  I was browsing in there recently and noticed they had a buy one, get one free offer running on a selection of jewellery.  So I did!

For such an unusual design it has a rather unflattering name.  They describe it as Silver Grunge Triangle Necklace!  Grunge??? Not sure where that comes from!  I thought the design had a middle eastern feel which appealed and the grey/silver colour is the perfect foil for the graphite grey skirt. 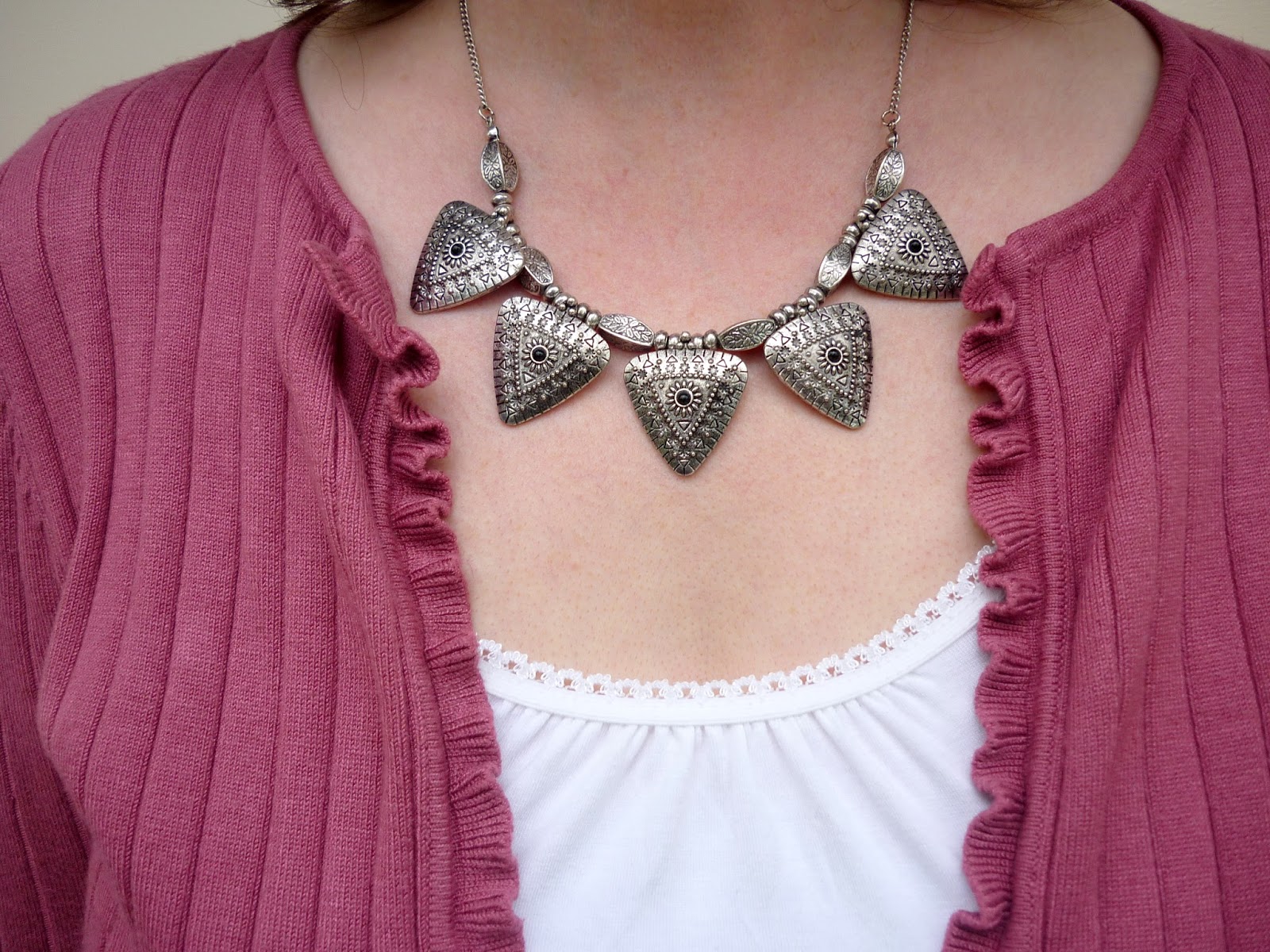 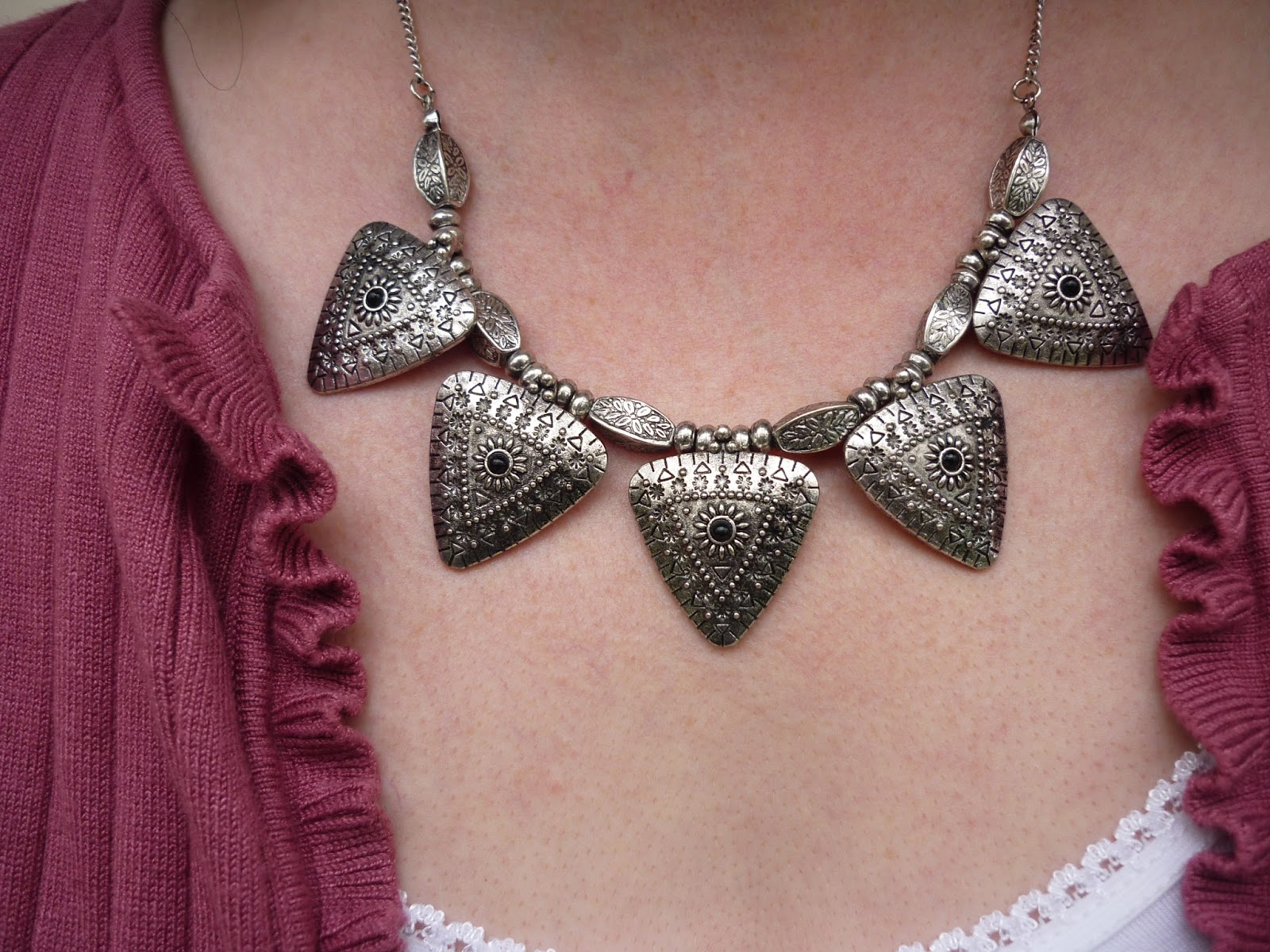 Fortunately, my plantar fasciitis has eased off, so I was able to wear my beloved black wedges again, probably for the last time this summer.  More triangle patterns. 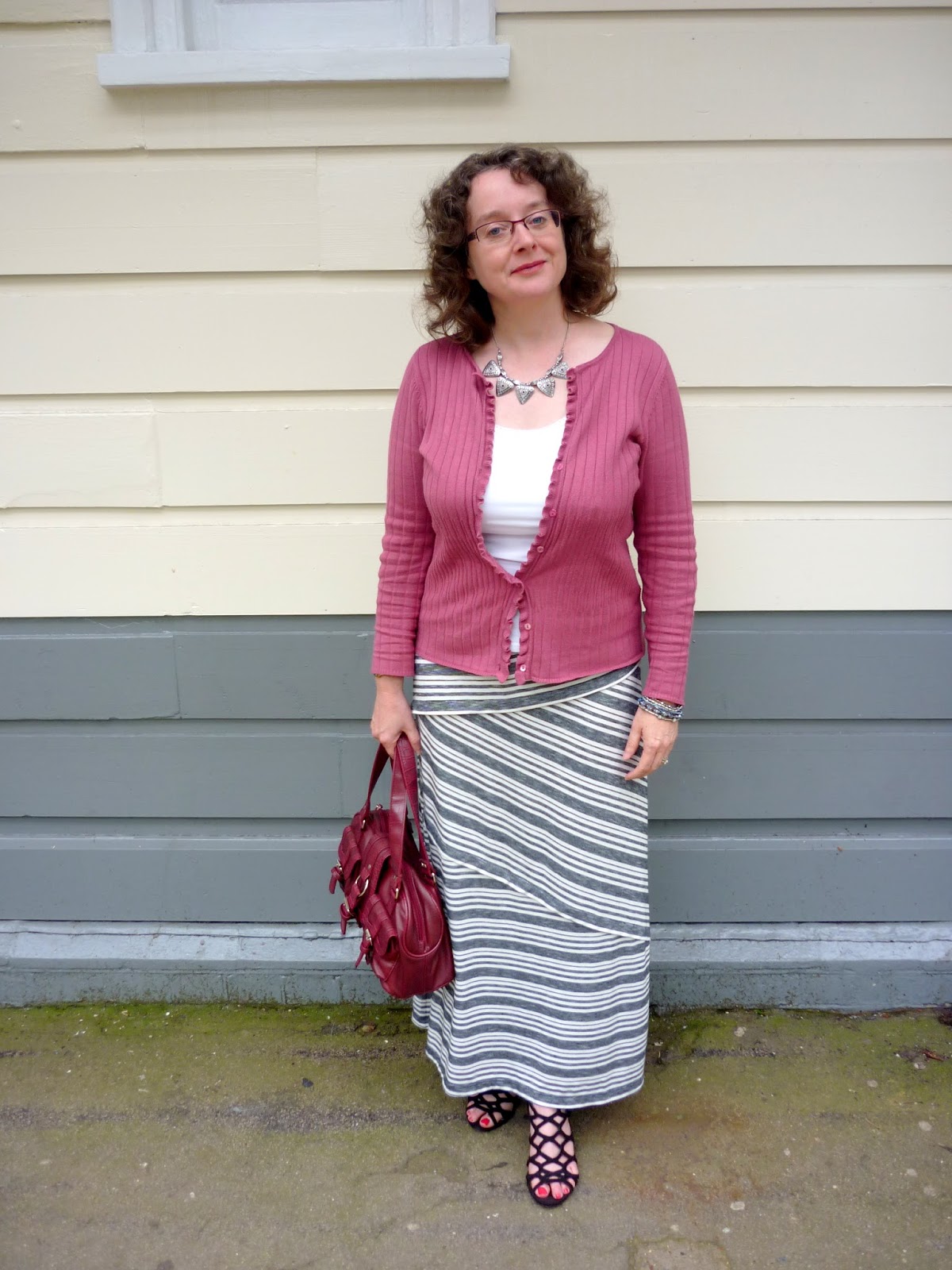 Our hosts were clearly old (pardon the pun) hands at partying.  You know you’re at a good party when on arrival you’re greeted with the ebullient words of;