On somewhat of a whim last Sunday, I dragged TallBrownFox to the Louis Vuitton Series 3, in London.  What is Series 3 all about?  It’s Creative Director, Nicolas Ghesquière’s third collection for LV, hence the 3 and the small exhibition is a way for people to experience something of the flavour of the Louis Vuitton Winter 2015 show. It’s a multi-media, sensory overloading, exploration of the creative process and influences behind Nicolas Ghesquière’s collection.

As we were going to have a visual experience from a French house, we decided that to help us glide into this luxurious, European mood even more, we’d have a taste experience from an Italian house. Lunch at Carluccio’s.

A gloriously bright day and no need for wrapping up meaning my cashmere, hooded cardigan was all I needed to ward off the Autumnal air and to look sartorially pulled together in a 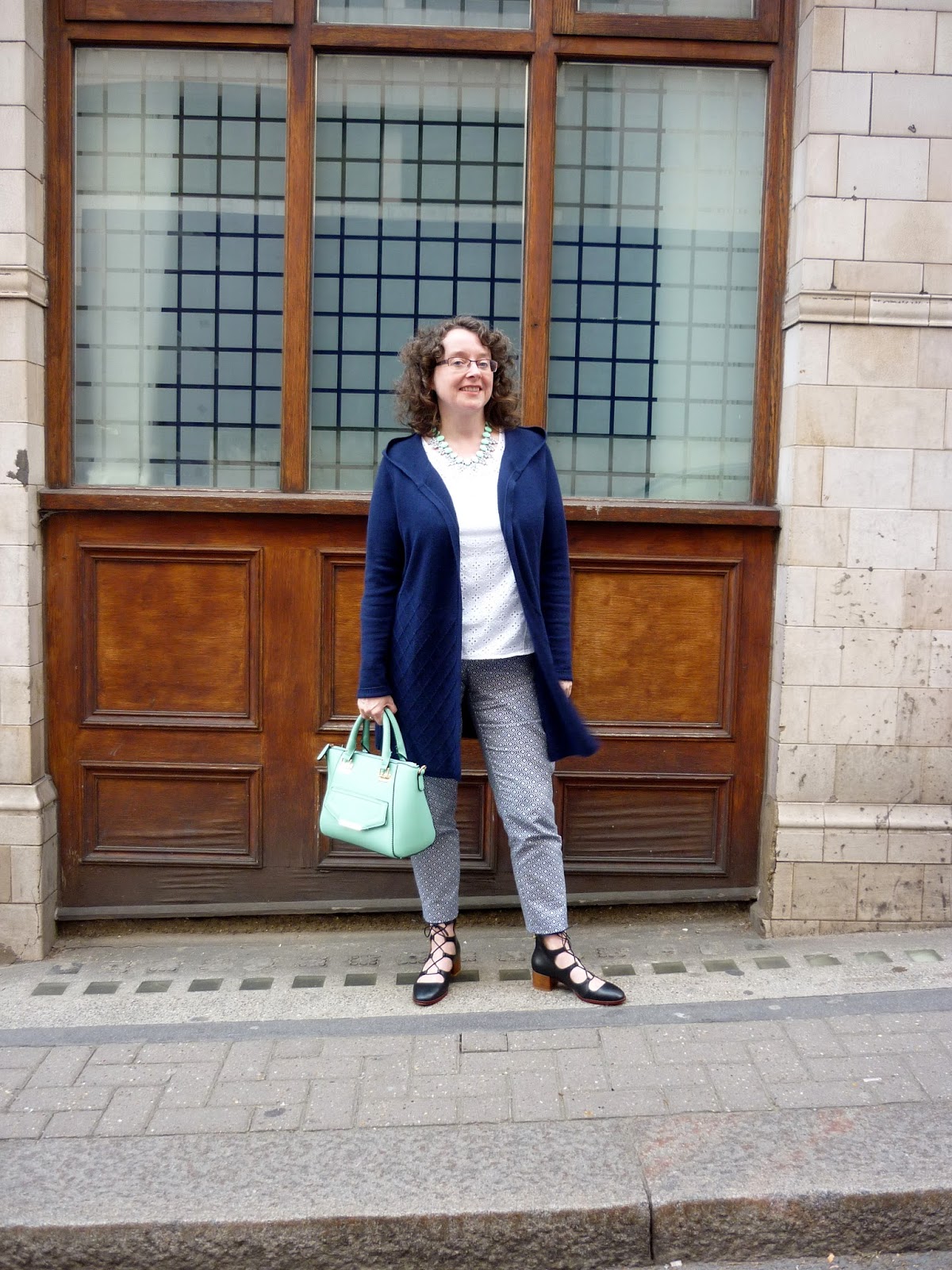 After scoffing perfectly cooked seabass (which is what you want from an Italian), we headed off to the venue, 180 The Strand.

How convenient that a red London bus drew up at the lights, just as I was taking this photo.  One of the iconic sights in London are our red buses!  Utterly unplanned but rather joyous, no less. 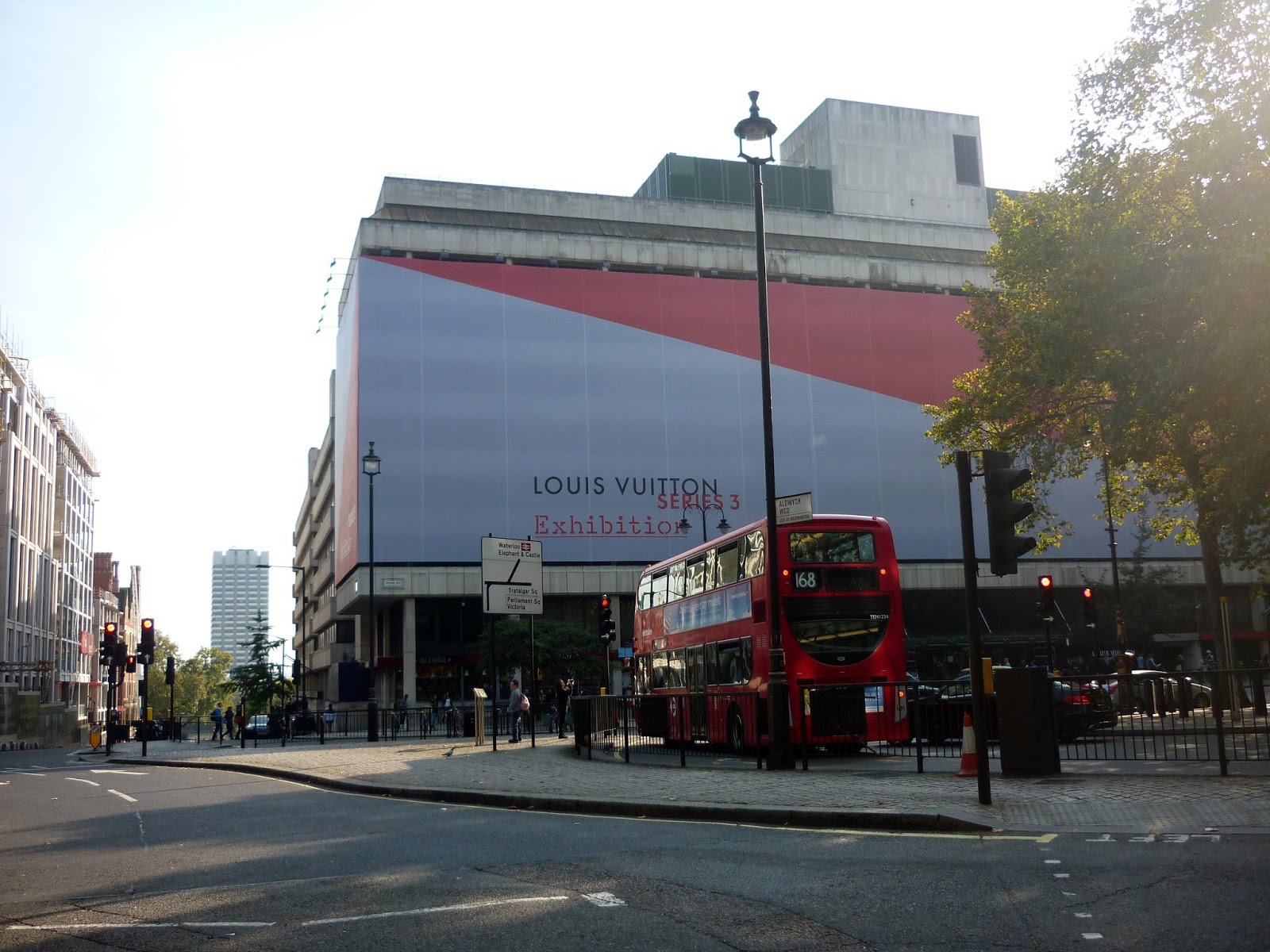 The exhibition is divided up into a series of rooms; 9 in all, each with a separate theme.  The first room is Genesis of A Collection, showcasing a giant geodesic dome.

Oops, pity about the spellie in the text.  Whoever proof read this wasn’t quite firing on all cylinders that day! 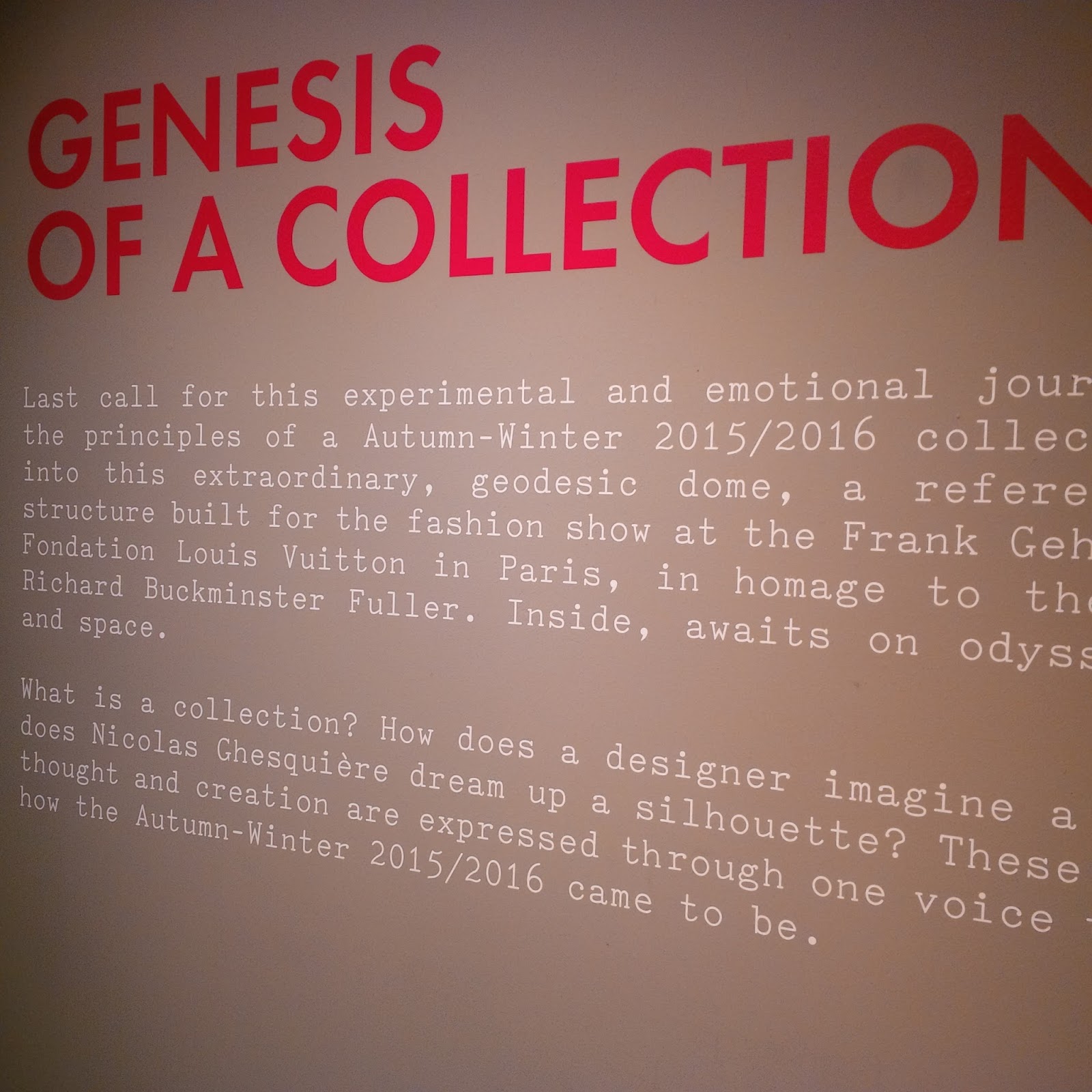 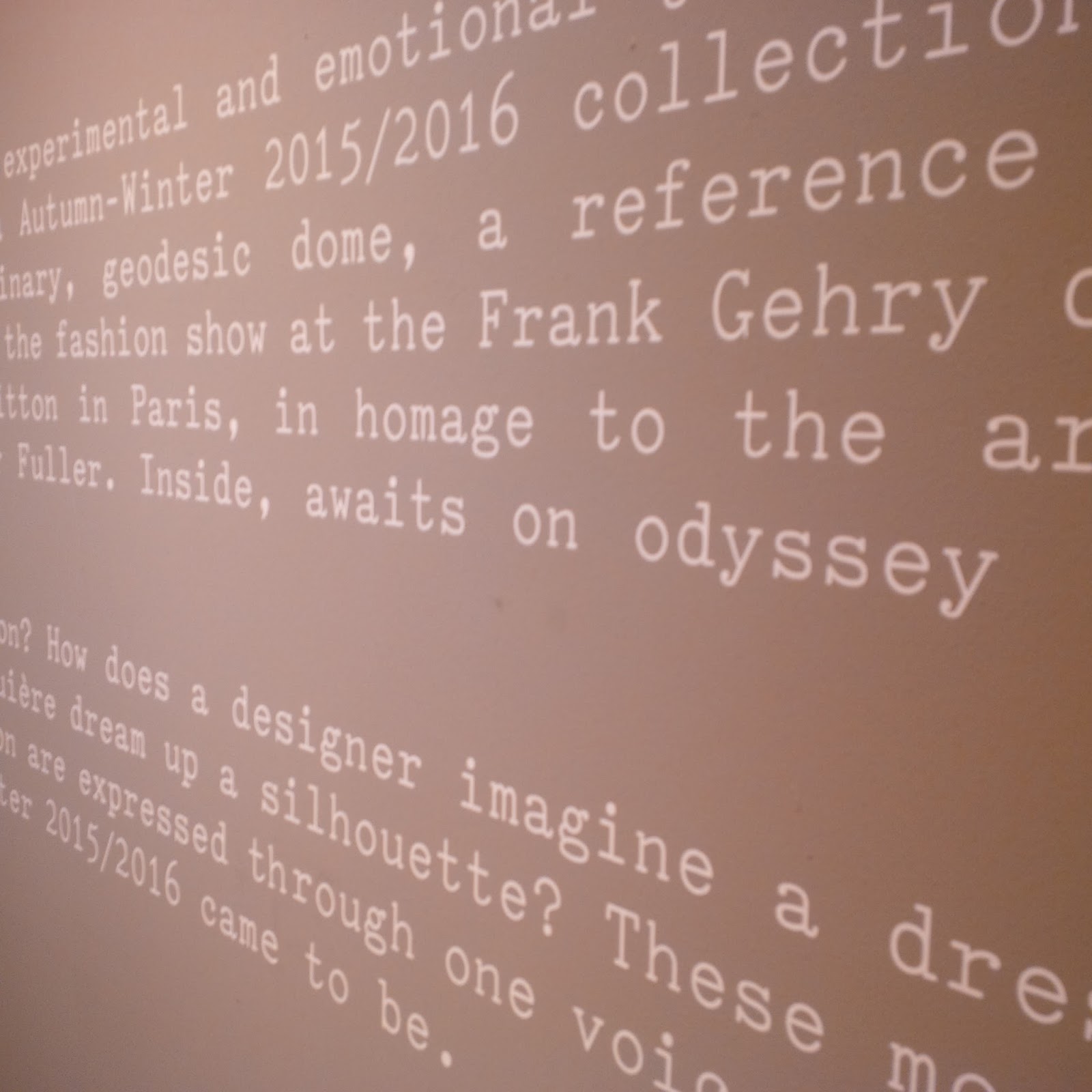 But if you’re still scratching your head regarding what the heck a geodesic dome is (yup, it got me too), allow me to elucidate.

It’s a light sphere or partial sphere structure developed by the architect Richard Buckminster in the 1940s.  It has a lattice or shell design which consist of elements of the tetrahedron and the sphere.

The dome here, is a reference to the structure built for the show in Paris. 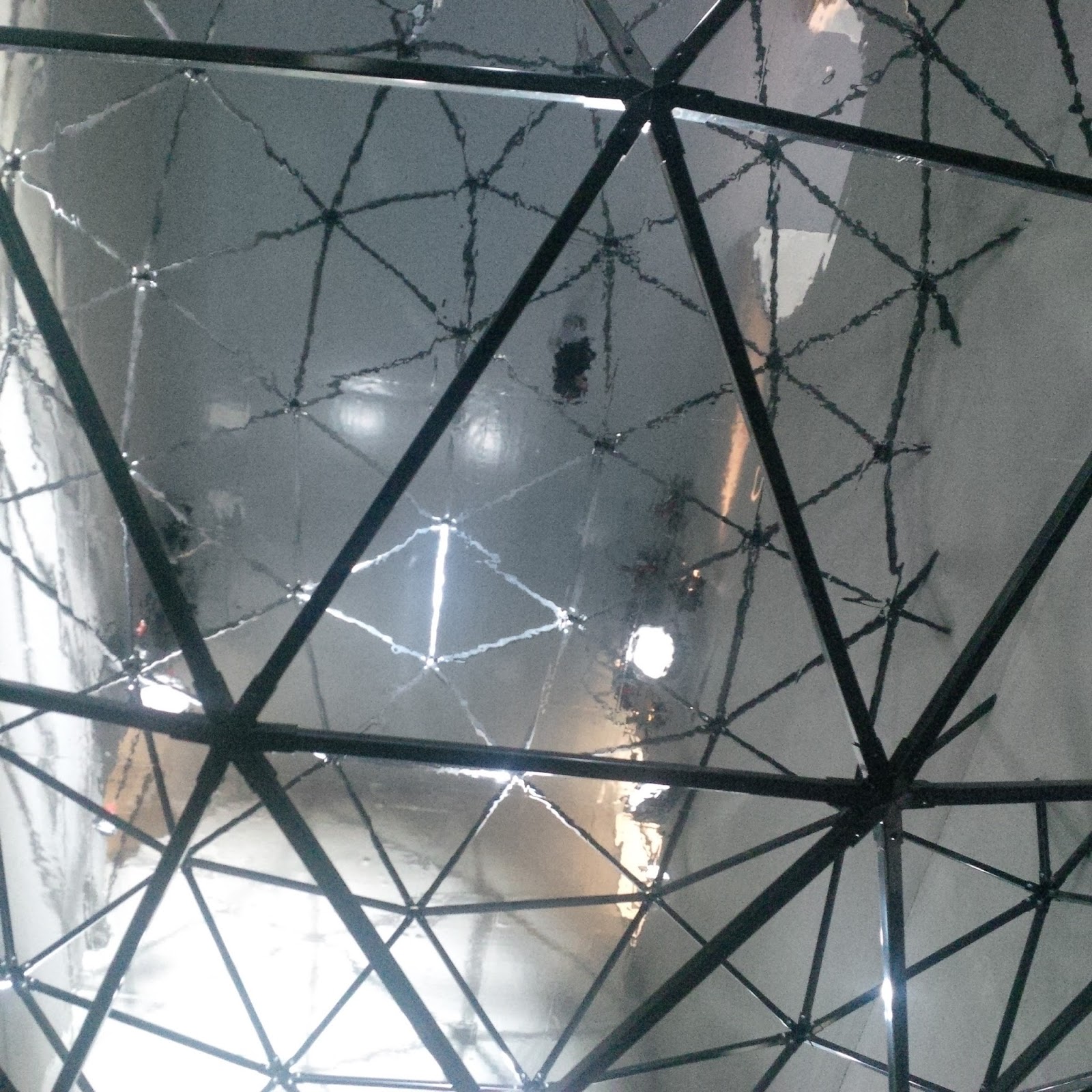 My outfit, which you can read about in more detail here, felt quite at home in this geometric environment, what with the trellis pattern on my long line cardigan, the print of my trousers and the criss crossing of the laces of my Ghillies.

This connection between the physical structure and my garments was utterly unplanned but rather joyous, no less. 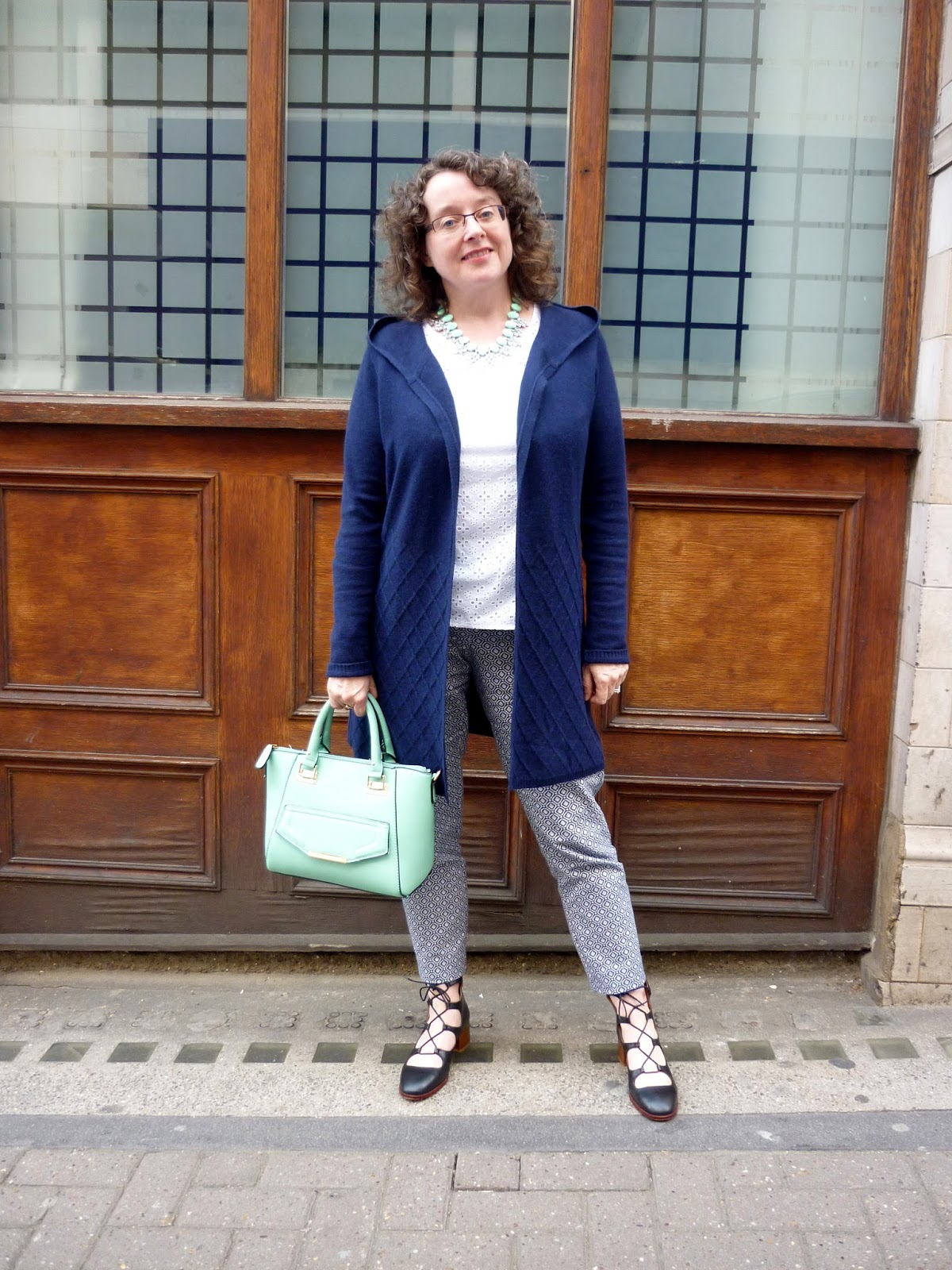 Master Mind and Artists’ Hands were the next two themed rooms.  Ever changing images and video projected on the walls and table tops, designed to try and give an insight to how ideas are created.  How thoughts can appear like flashes at lightening speed from nowhere and then disappear just as fast.

The rooms were quite small and dark and when full of people could feel claustophobic but it seemed that was part of the experience.  The internal workings of the mind being recreated externally. It did feel a little like my eyes and ears were being assaulted and with all the lights, the temperature was definitely creeping to the hot!  But no hot flushes were experienced. 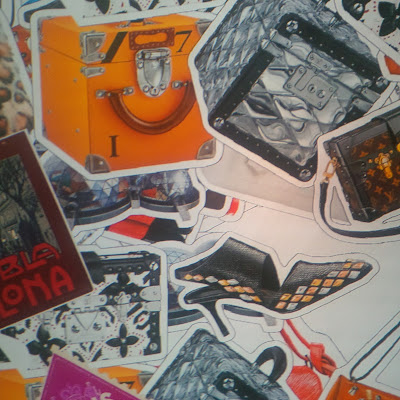 This room created the feel of what would have been the catwork show.  Short bursts of video continuouly displayed on multiple screens of the models wearing the collection.  You can see the geodesic dome structure behind the models. 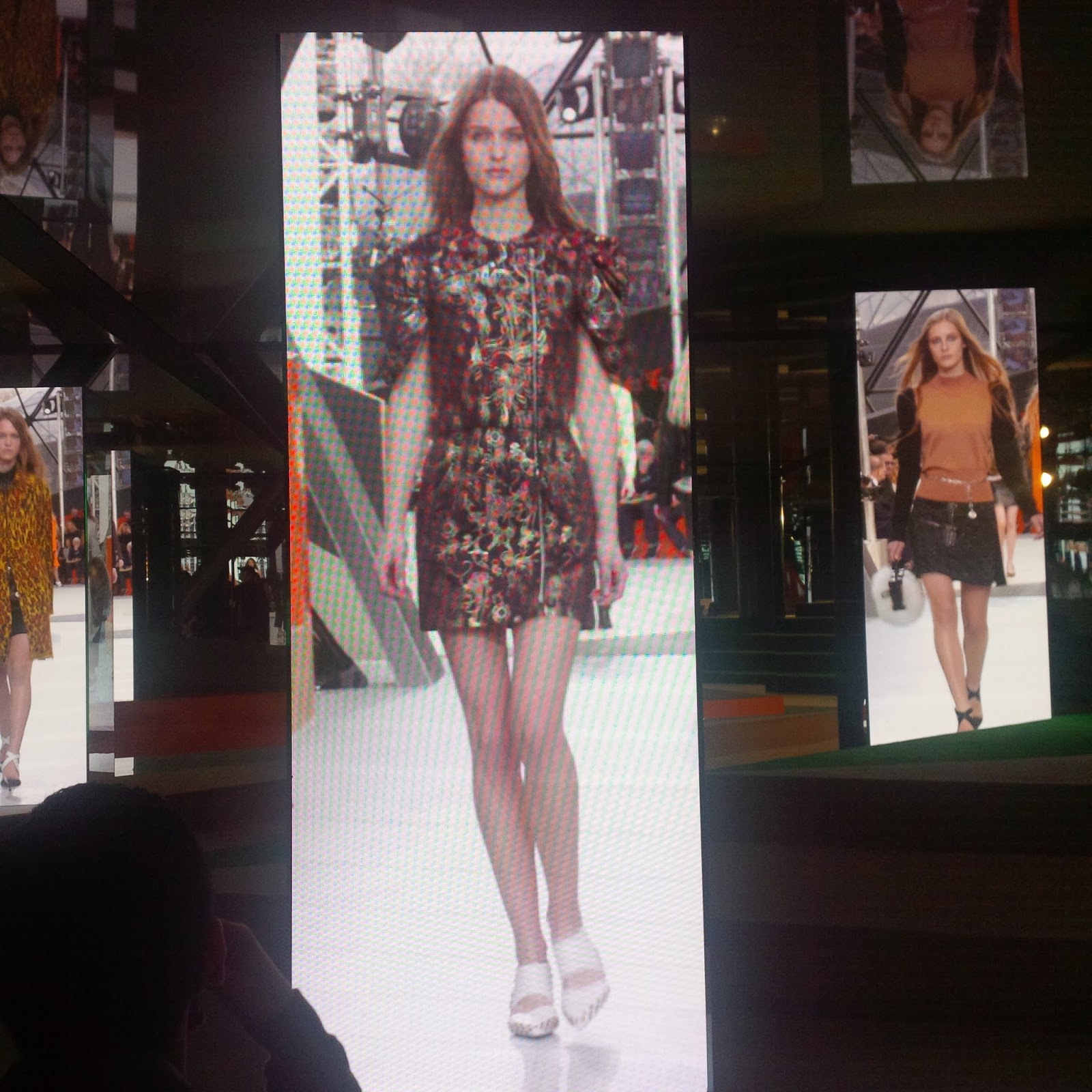 The next two rooms were The Science of Savoir-Faire and A Tale of Craftsmanship.   The former explained how all the patterns are now cut using modern technology.  Any defects or marks in the materials are circled by hand and then computers take over.  They work out the most efficient way of cutting the patterns around these marks, so there’s no waste.  Lasers execute the precise job of cutting.

Then it’s over to the highly trained artisans to make the goods.  And in the second room, two such skilled employees were there showing you how it’s done.  If you couldn’t get close enough to the work table to see this intricate work, there were big screens overhead.

It was interesting to see a bag being made in front of you.  The different stages, the detailed processes, the sheer number of materials required.  There were guides on hand and they actively encouraged people to ask questions. 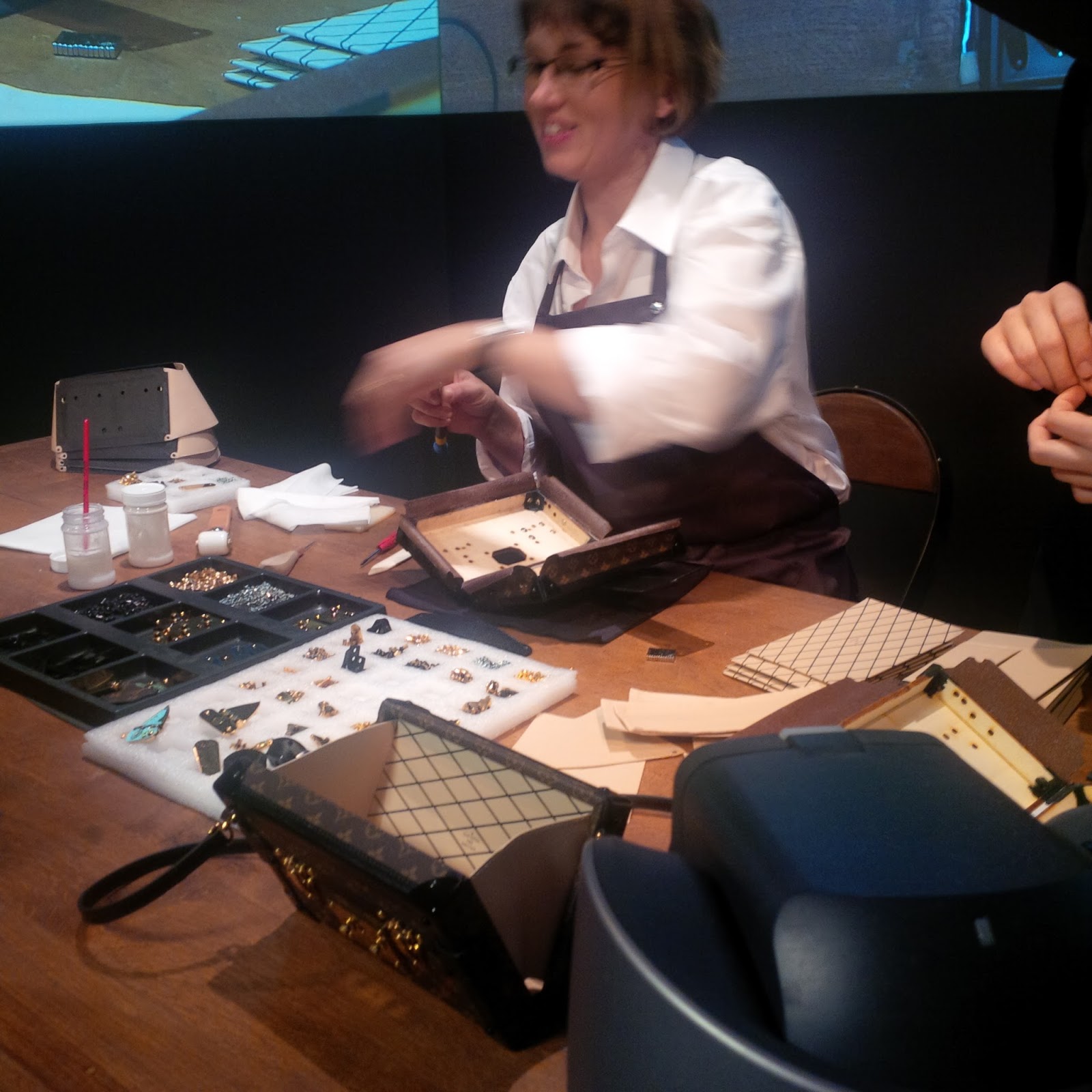 This was definitely my favourite section of the exhibition, as displayed alongside some of the current collection were historical pieces from the Louis Vuitton archive that have inspired Nicolas Ghesquière.  Over to the monsieur himself:

“For me, accessories never stand alone, there has to be a common thread between them. They’re an integral part of each outfit,  either clashing or complementing it.  They share the same sentiment and movement as the garment.  A silhouette is a complete make-up of all these elements.”

So, echo-ing M. Ghesquière’s sentiments, I couldn’t resist a little posing of my own accessories. These two handbags couldn’t possibly be further away from each other in price if you tried!  And I’m not afraid to admit that I prefer mine to the model’s. 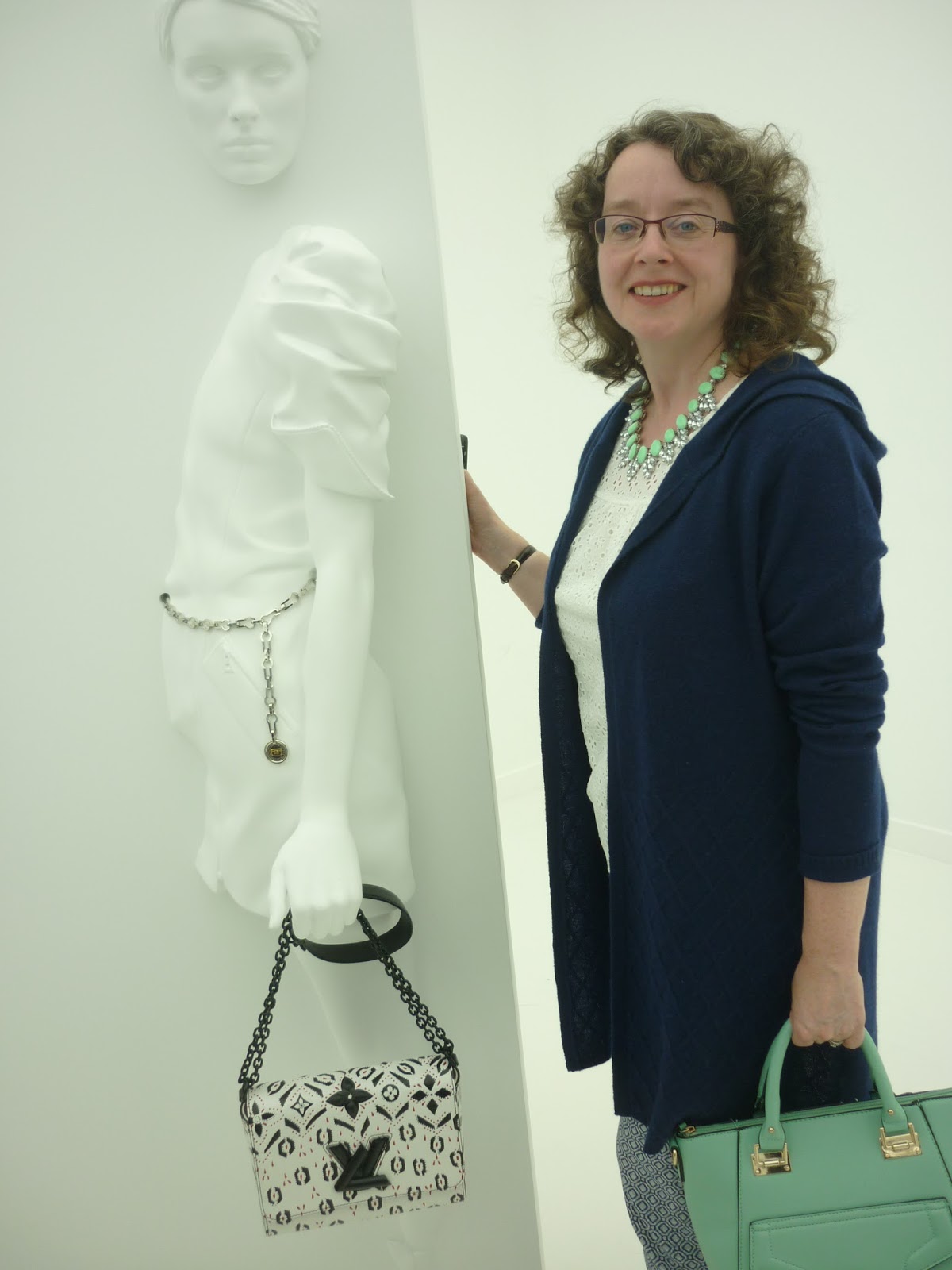 But I wouldn’t mine these sunglasses though.  I’ll email my prescription to LV and see if they’ll give me a pair.

Mustard is quite an Autumn colour this season but heavens, look at the size of the bag!  Barely room to shoe horn in your phone, let alone your lipstick. 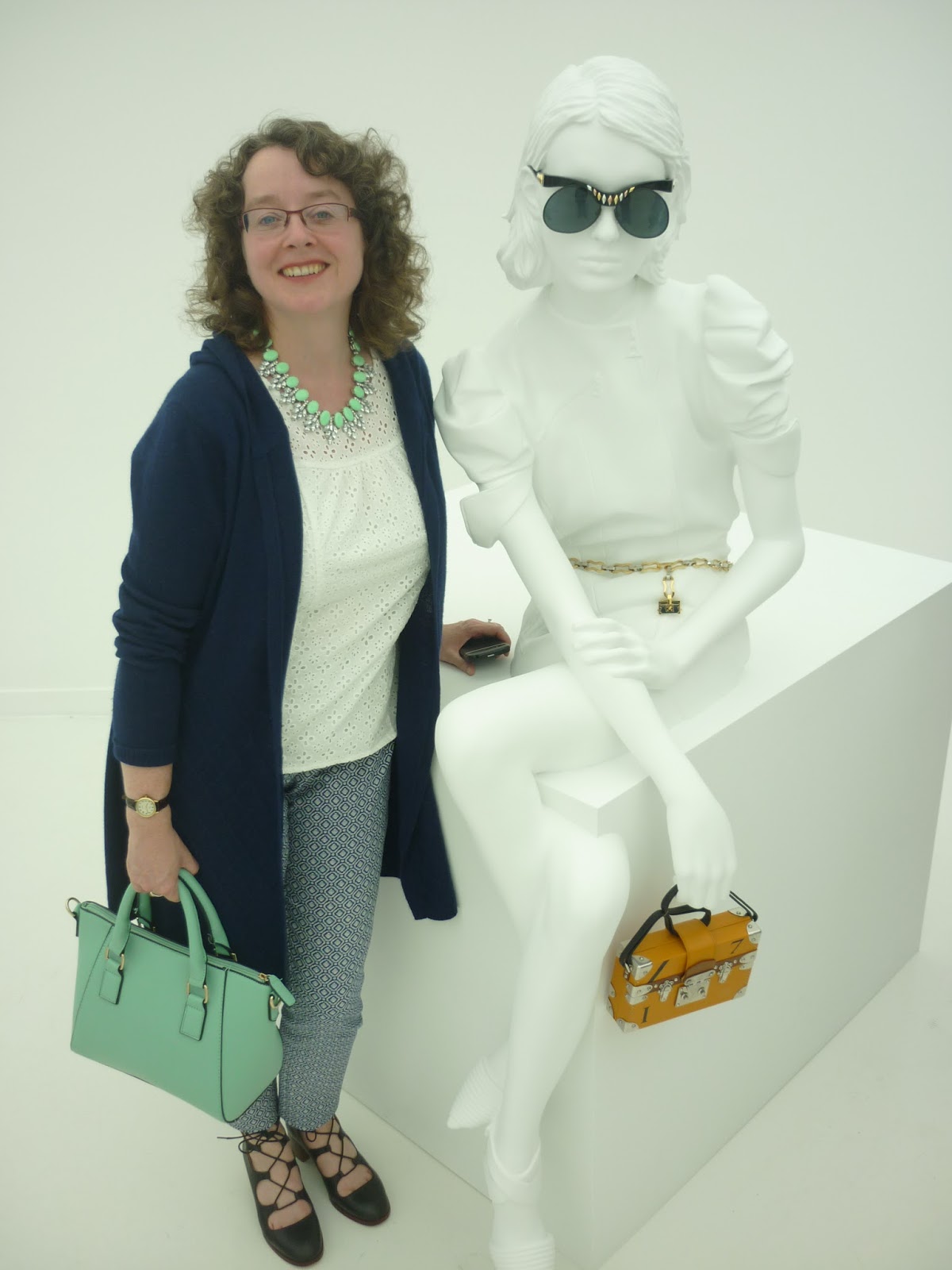 From minimus to MAXIMUS.

Would you believe me if I told you the below trunk wasn’t for clothes but for cutlery?  I know, I want one just for my cake forks, if you please!

Oops, you can see the reflection of my shoes in the glass. 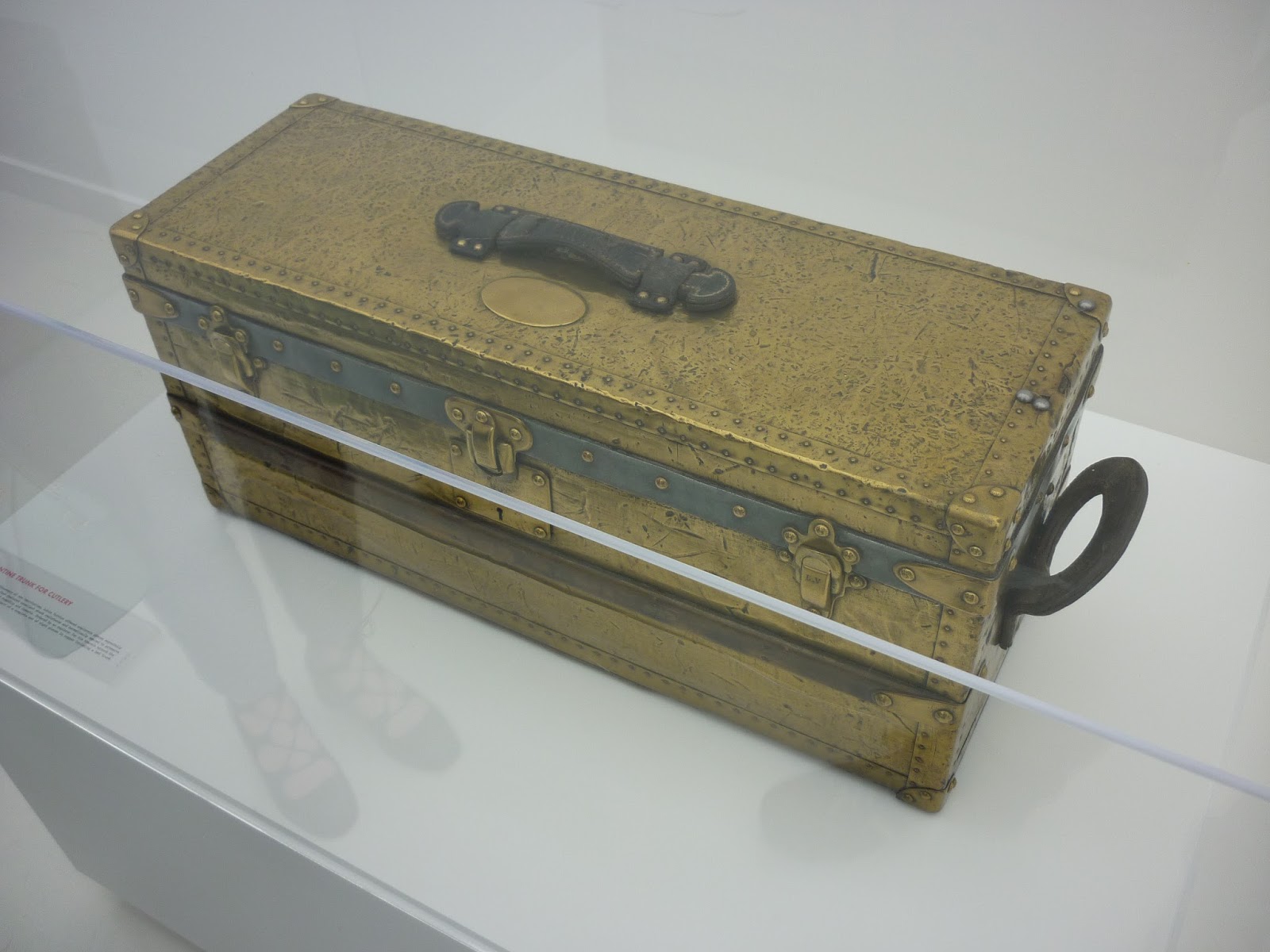 I love the rich, dark wood of this gentleman’s hat box.  Apparently it could store up to 5 hats – a space saving solution of its day! 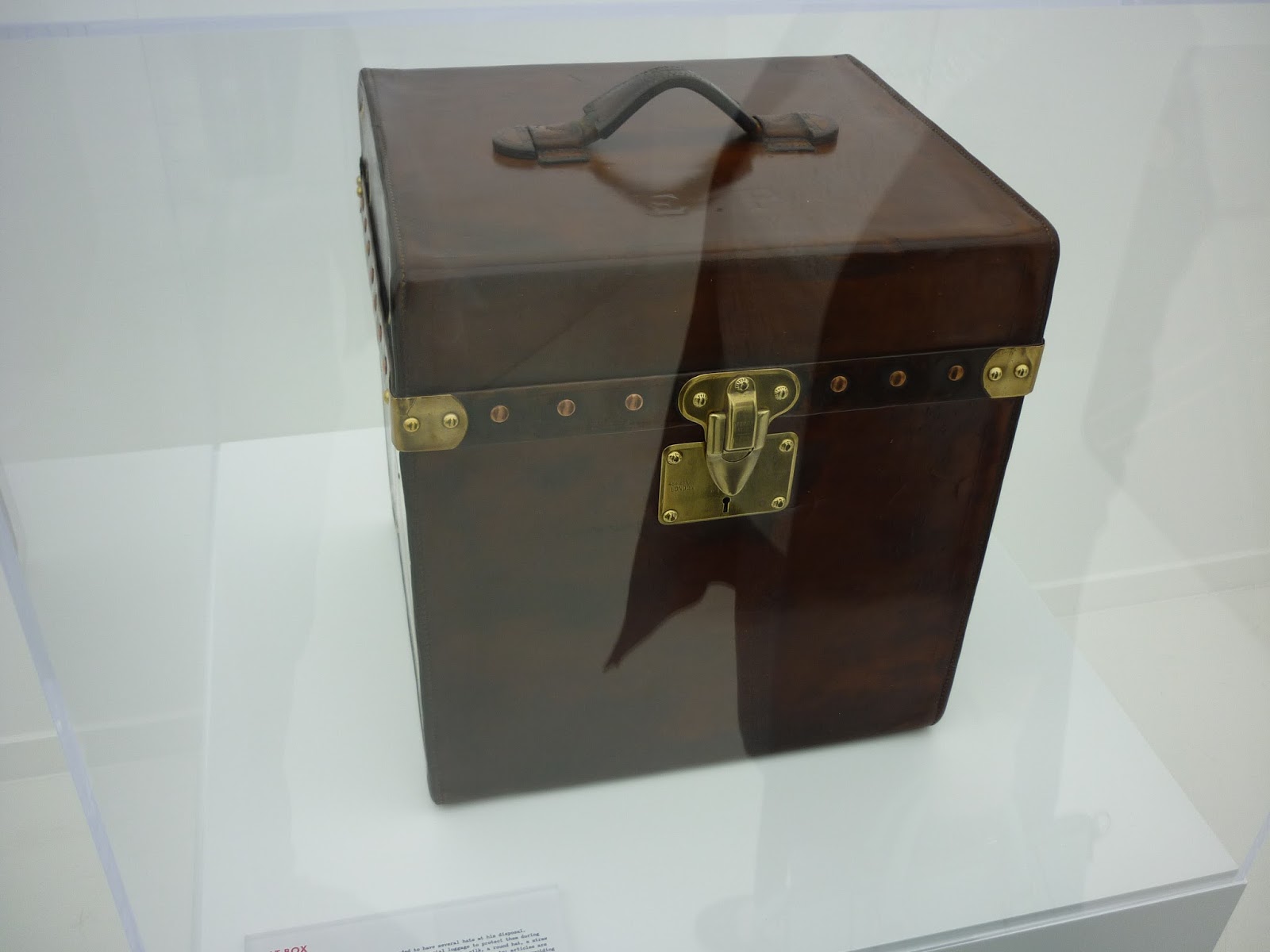 From one Frenchman to another – the car manufacturer – André Citröen.  With Vuitton, they designed this Racing Half Track Trunk for the Half Track Cars, he used and off he went with these to explore Africa. 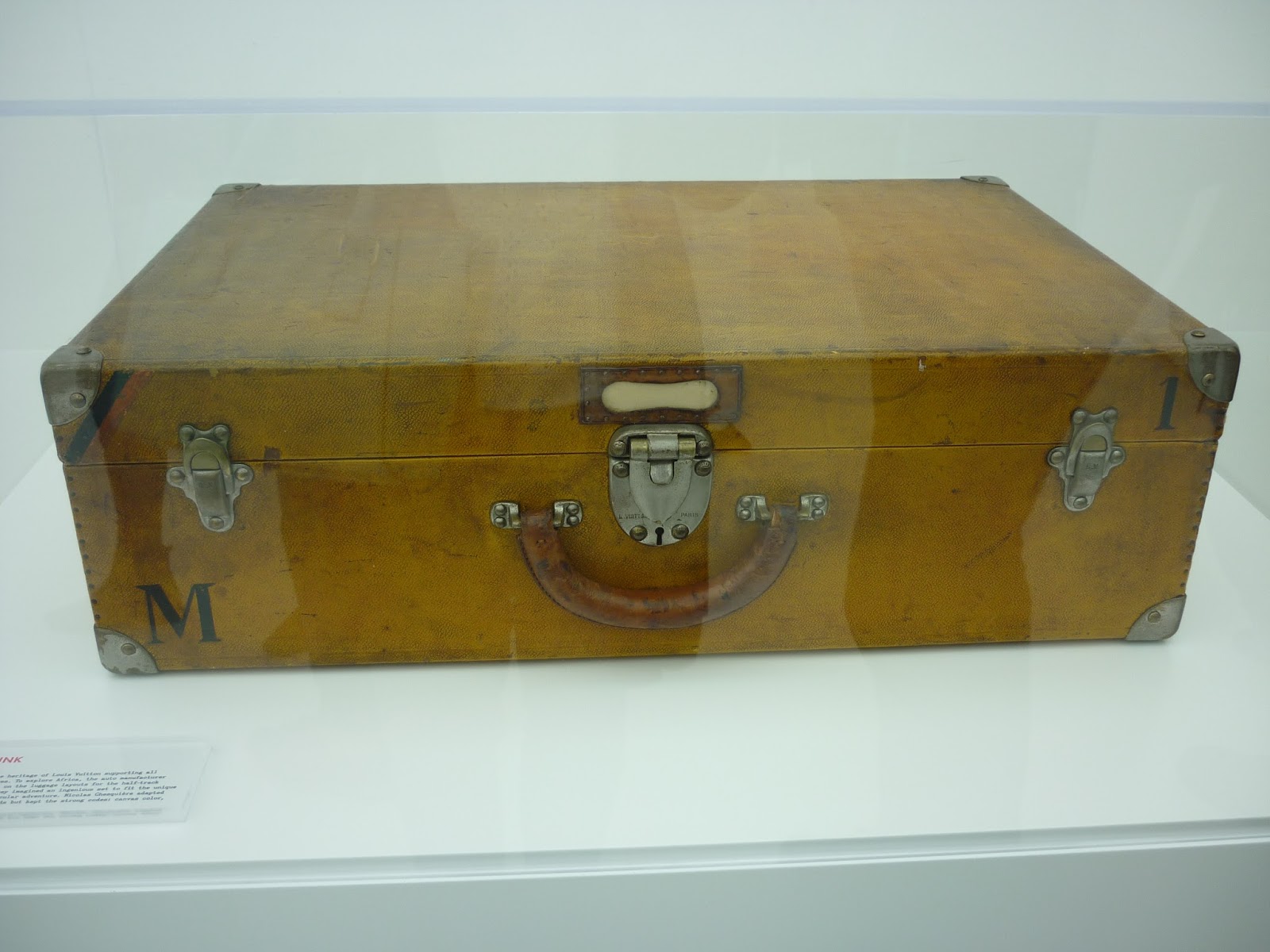 This striking red trunk was made for Albert Kahn, the French banker and philanthropist.  In 1909 he created and funded the project, The Archives of the Planet; a photographic record of world cultures, people and buildings. 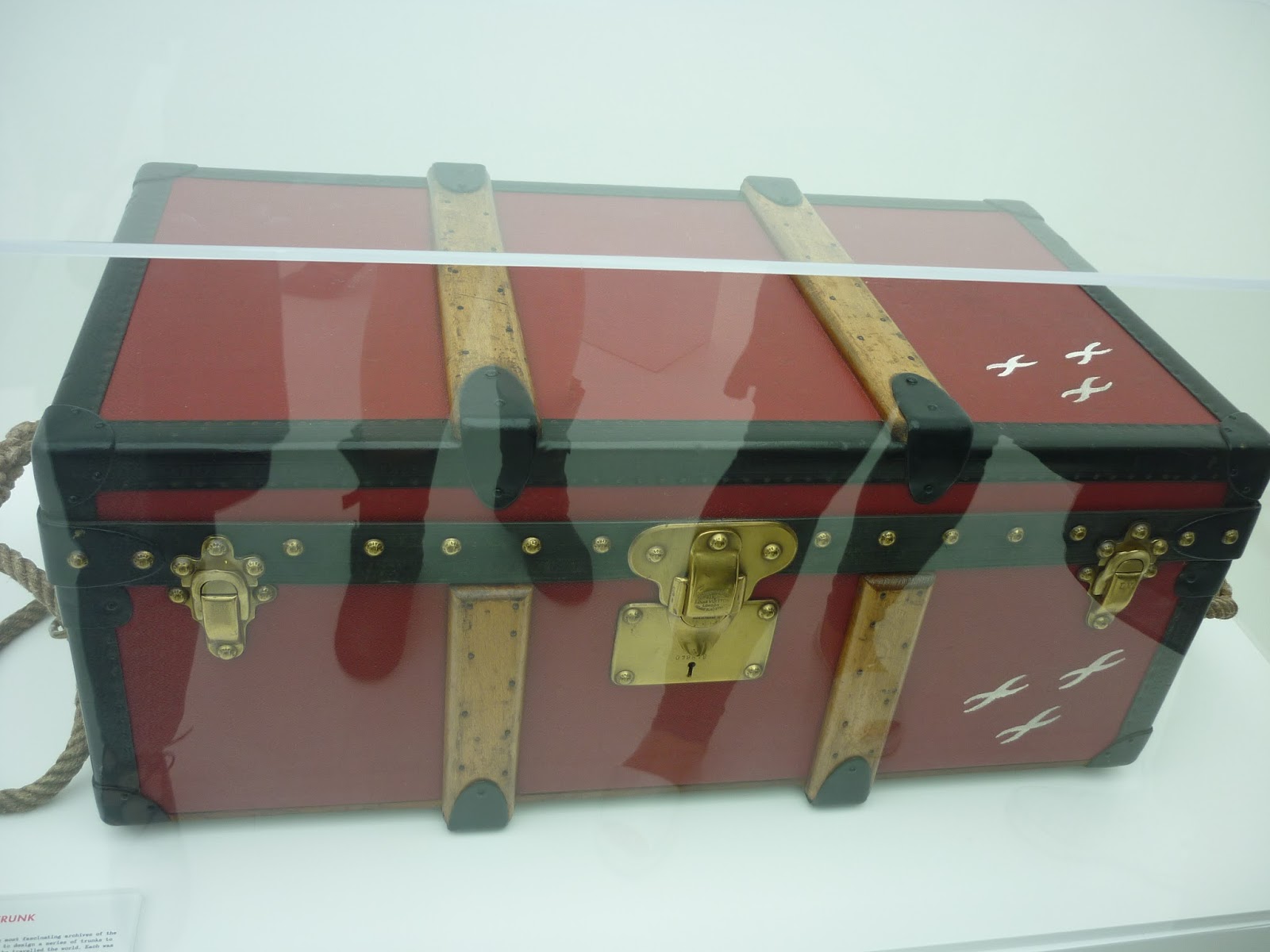 From gents we move to ladies and wouldn’t you just adore this make-up case for your cosmetics?  It was made in 1966, so it’s as old as I am!

The special tweed canvas was probably used for sample trunks, in which case, I’ll very happily take this sample. 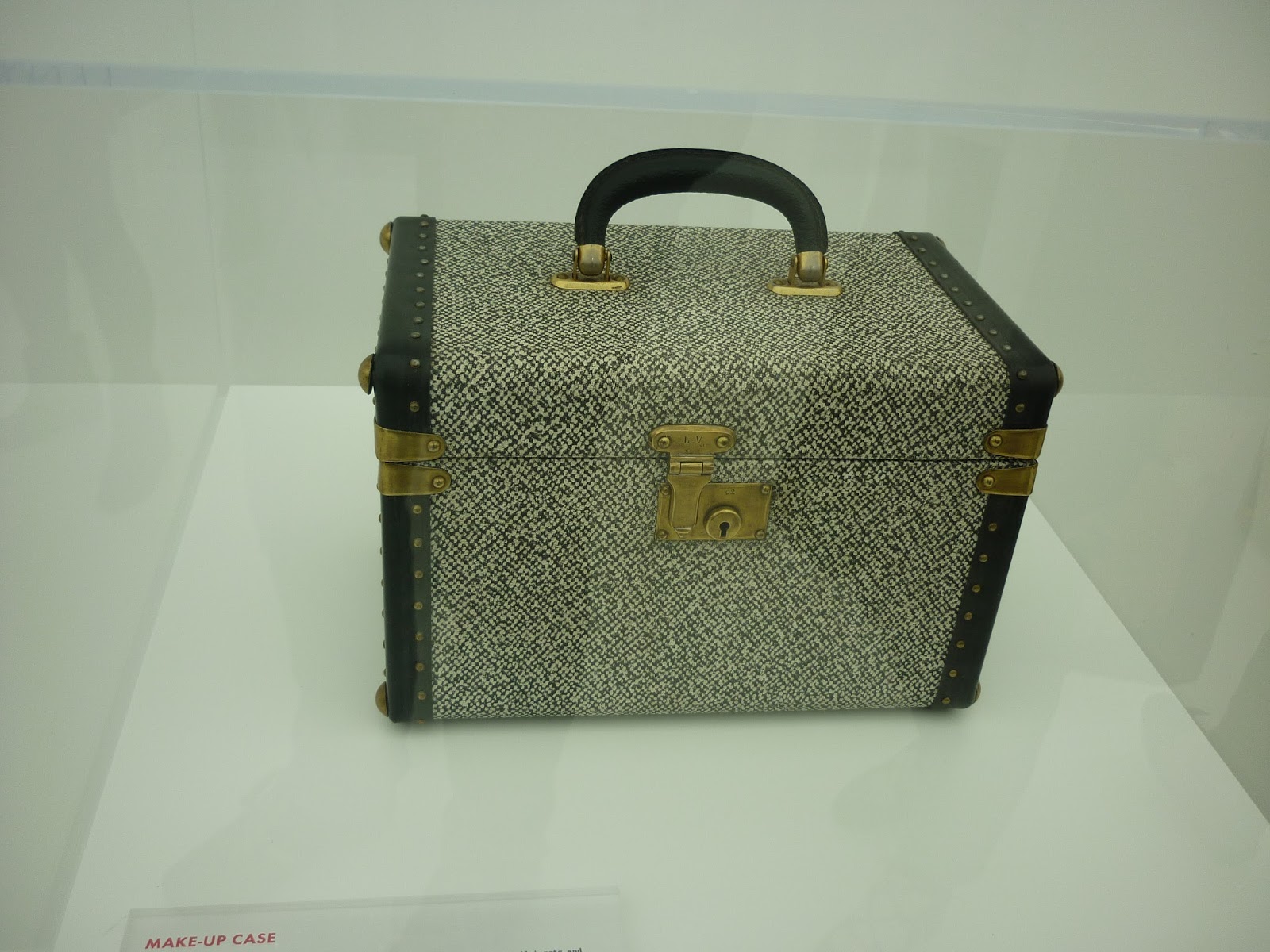 Moving up in scale, this is a Low Trunk for Ladies.  Made for a special lady of the time, Roberte Cusey, who was Miss France, 1927.

Such craftmanship and great to actually see what the inside of one of these trunks looks like. 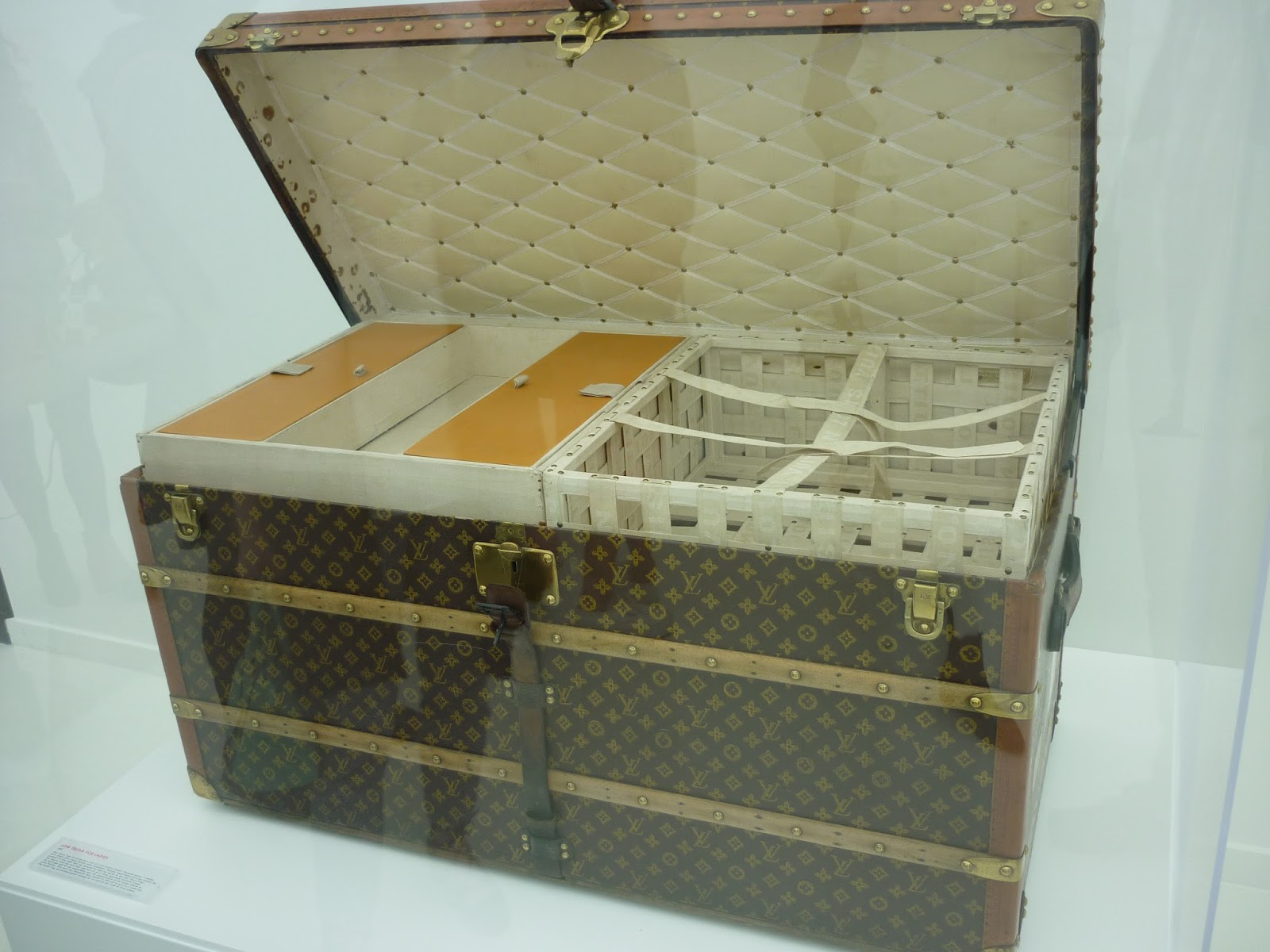 Voilà !  Personalised, no less.  No need for luggage labels when your title and national flag are emblazoned on the side! 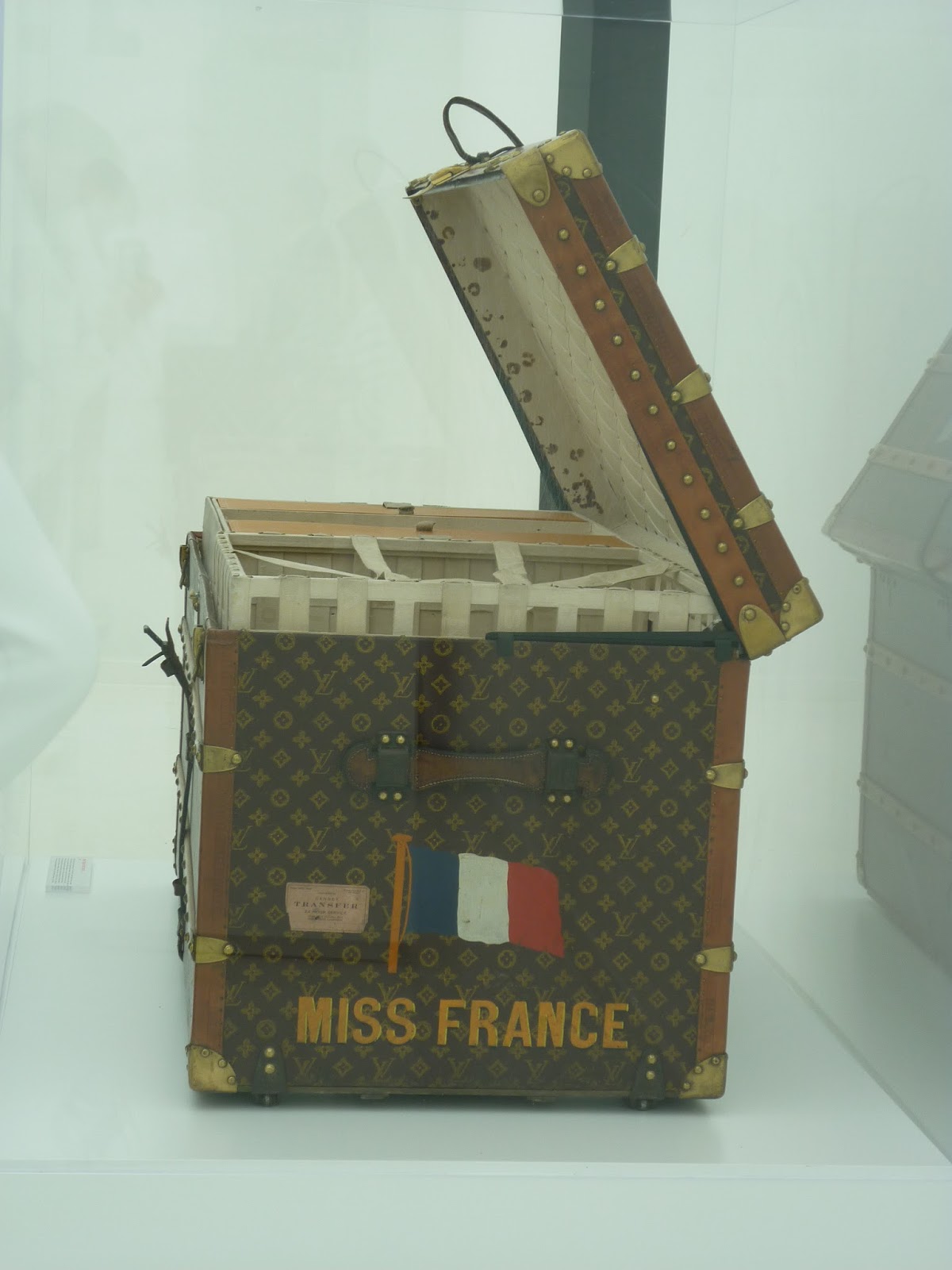 Where we got to see some of this season’s designs.  Remember this dress from earlier?  I was rather taken with the red and gold print – very striking – but those sleeves would need altering.  I’d look like an American Football player wearing those! 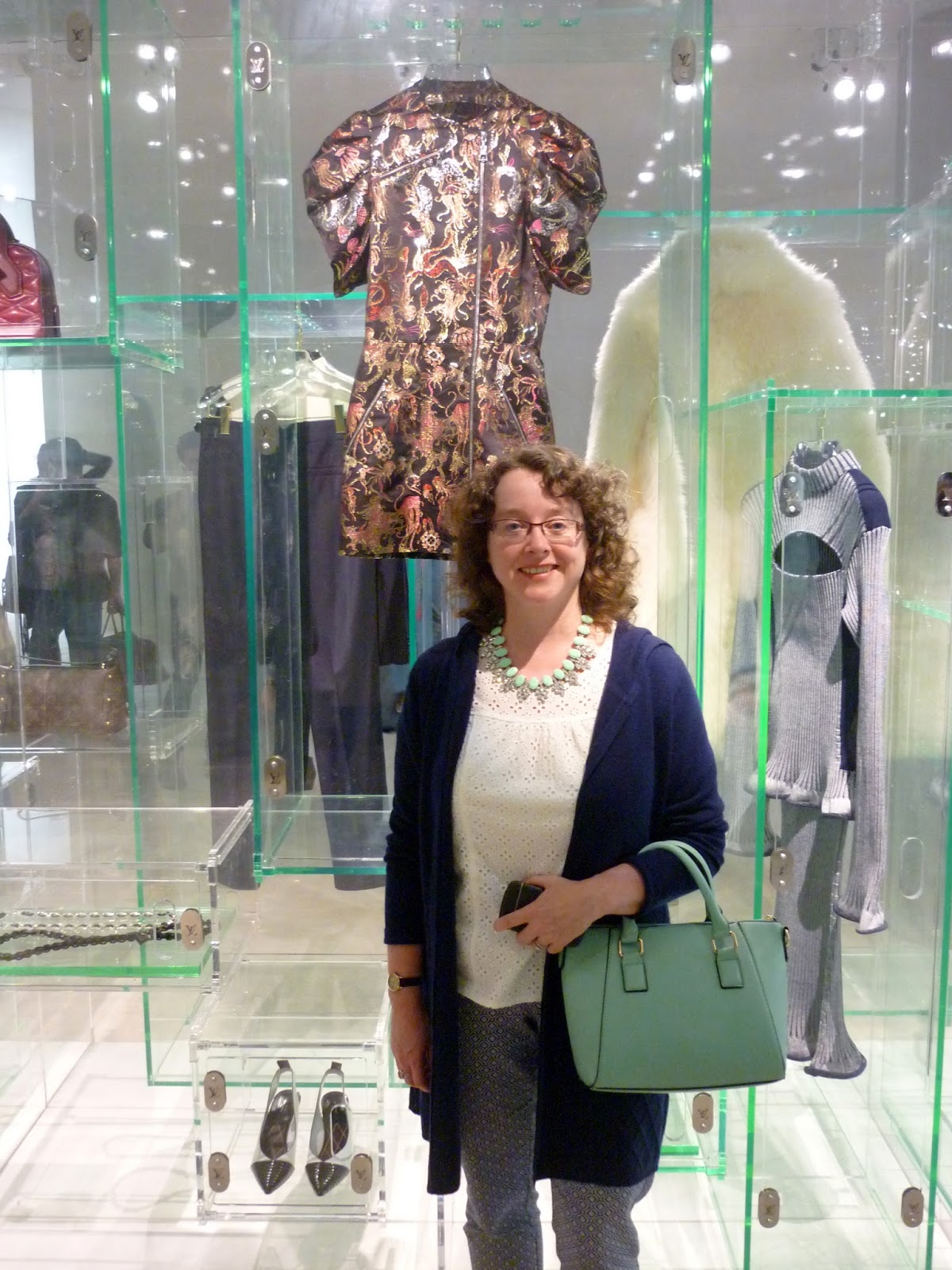 And this jacket, oh yes.  I could very easily see myself wearing this little number.  Gorgeous.

And like the model in the earlier photograph, I’d wear it with my leather (albeit faux leather) trousers and pointy boots, 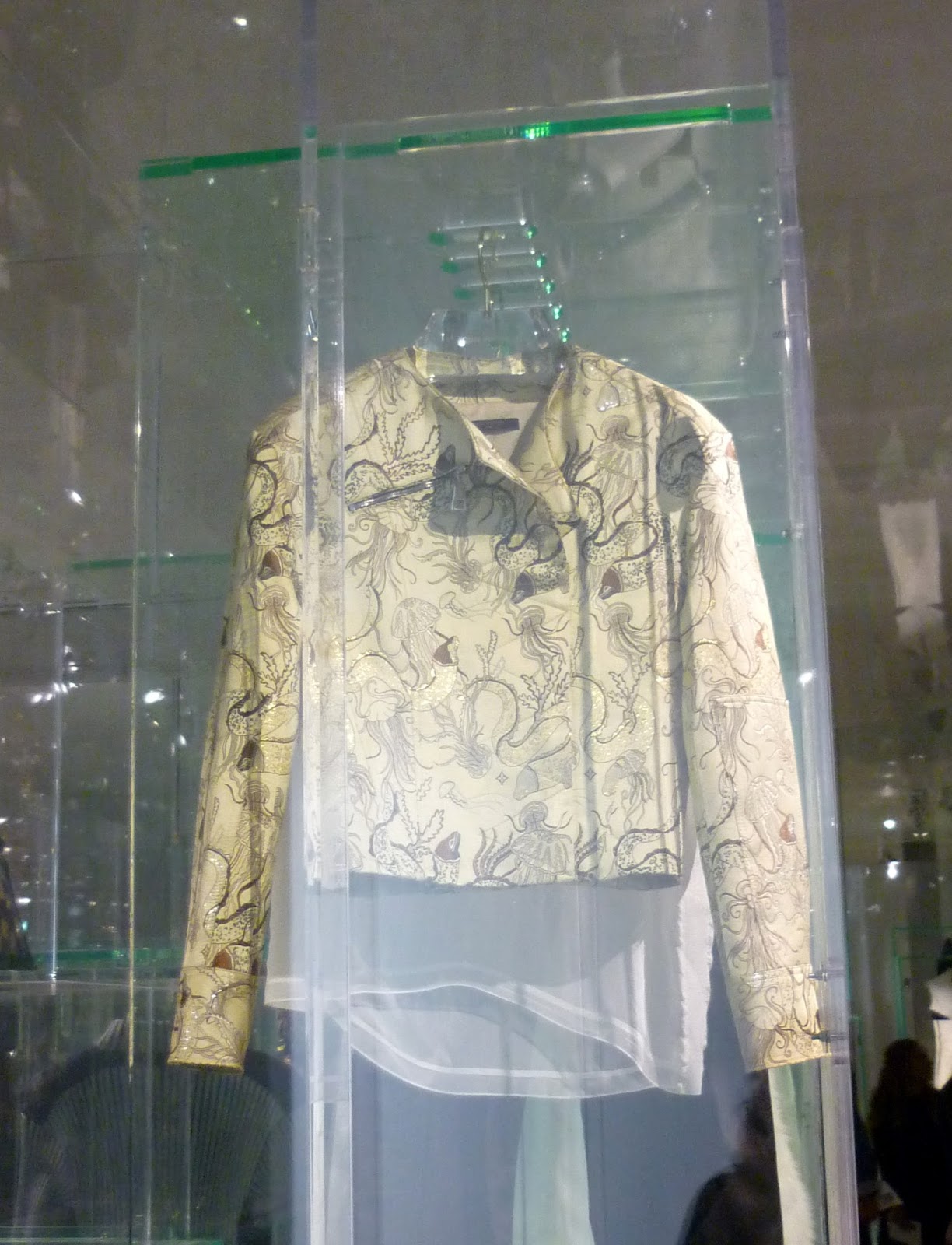 After the show it was time to find a comfy leather chair, take the weight off the pins and refresh with a drink.

The fact that I’m sitting in a caramel coloured chair which is very similar to the colour of the LV logo was utterly unplanned but rather joyous, no less. 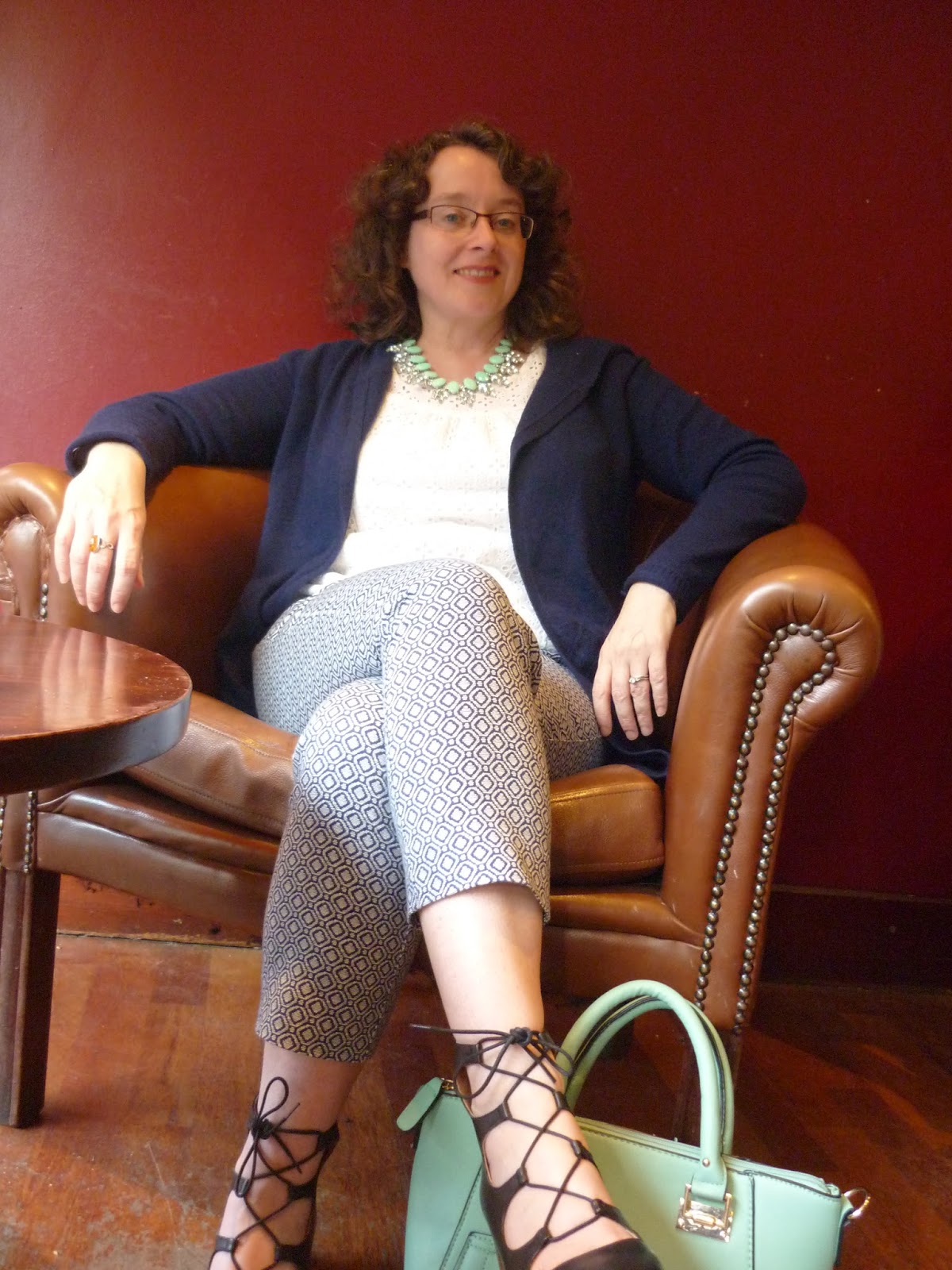 Despite protestations from LV, the exhibition is, in truth, a rather glorified marketing campaign and PR exercise but as long as you’re aware of that, it’s fun to go along for the ride and to experience a behind the scenes peek at what goes into making high-end, luxury products and creating a collection. And it doesn’t cost anything because it’s free.

Despite free entry, it’s best to book tickets, as it’s timed entry.  Otherwise, you’ll have a long wait outside in the queue.  For the length of time it took us to go around it (roughly an hour), it’s not worth standing in a queue.

Would I have paid to go if it wasn’t?  No, because compared with other exhibitions on in London right now at the likes of the RA, the Barbican and our other world class museums, it’s not in that league. But to be fair, it’s not trying to be.  If you’re planning a day trip to London for shopping, sight-seeing or theatre-going and you want to fill an hour with something that’s just that little bit different from the usual fare of what’s on in town, then go.  180 The Strand is the perfect jumping off point; 15 minutes walk in one direction, you’ve Covent Garden and Trafalgar Square, the other, St Paul’s and the City.

My whistle stop tour of the exhibition for you.  A slice of history, a dash of geometry and topology, all sprinkled in amongst the frocks and fancies.  The Series is running for another week ending 18th October.