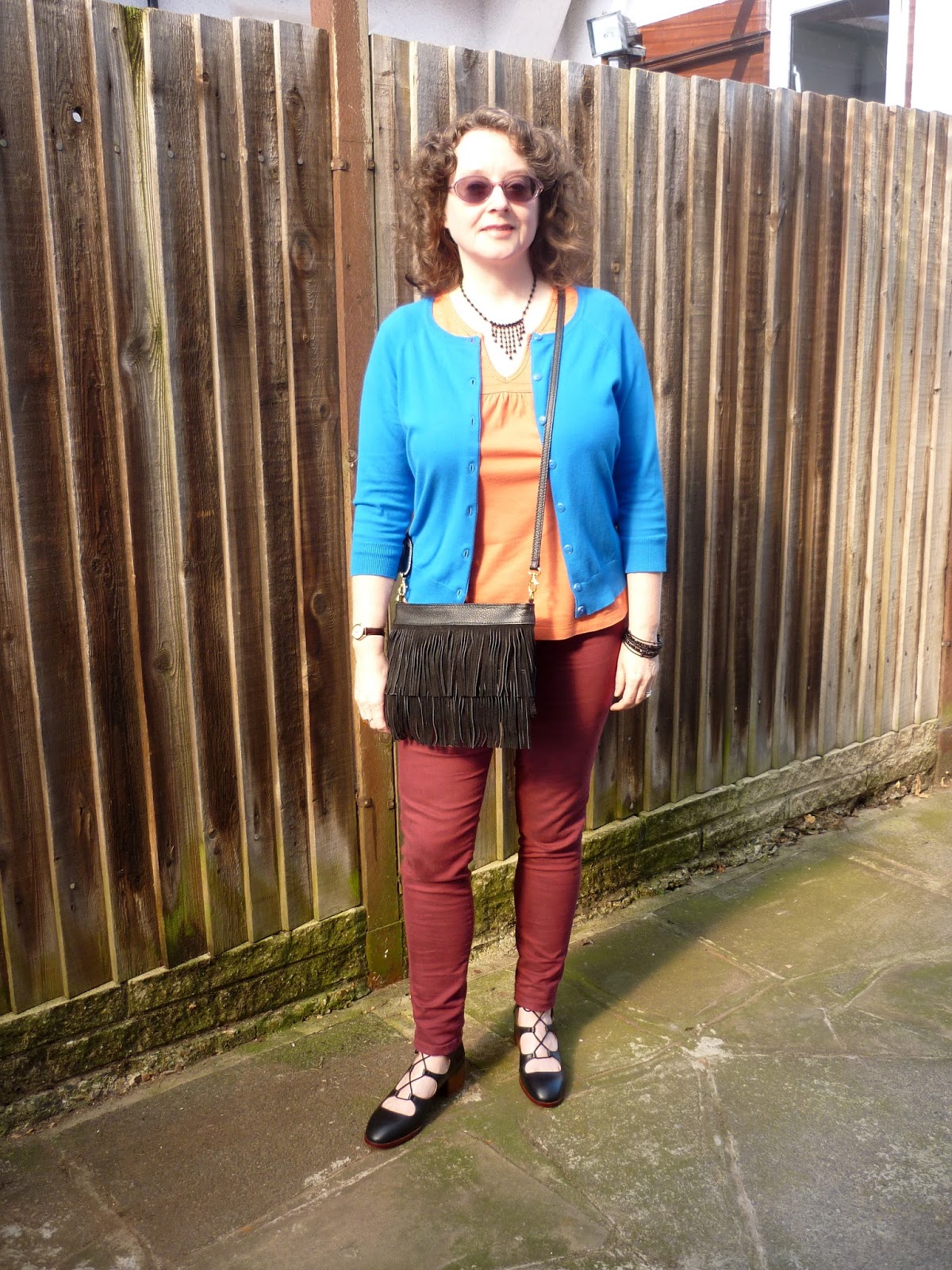 Quite often inspiration is right in front of you.  So close that you can’t see it because it’s right under your nose.  It bides its time, waiting for you to see it.  Suddenly, you catch its eye, the penny drops and BOOM, you think;

“That’s been hiding in plain sight all along.  Why didn’t I see it?”

And that’s exactly what happened with the idea behind this week’s Seasonal Skinny Style Challenge.

On my desk, I have the 2015 Wildlife Photographer of the Year calendar.  I sometimes change around the photos that go with the individual months and last month, I had August’s photograph next to September.  Why?  Well, simply because it felt more of a September photo than an August photo. I know, there’s absolutely no logic in my choices sometimes!


And here it is.  Doesn’t it look like a modern stained-glass window?  But it’s not glass. 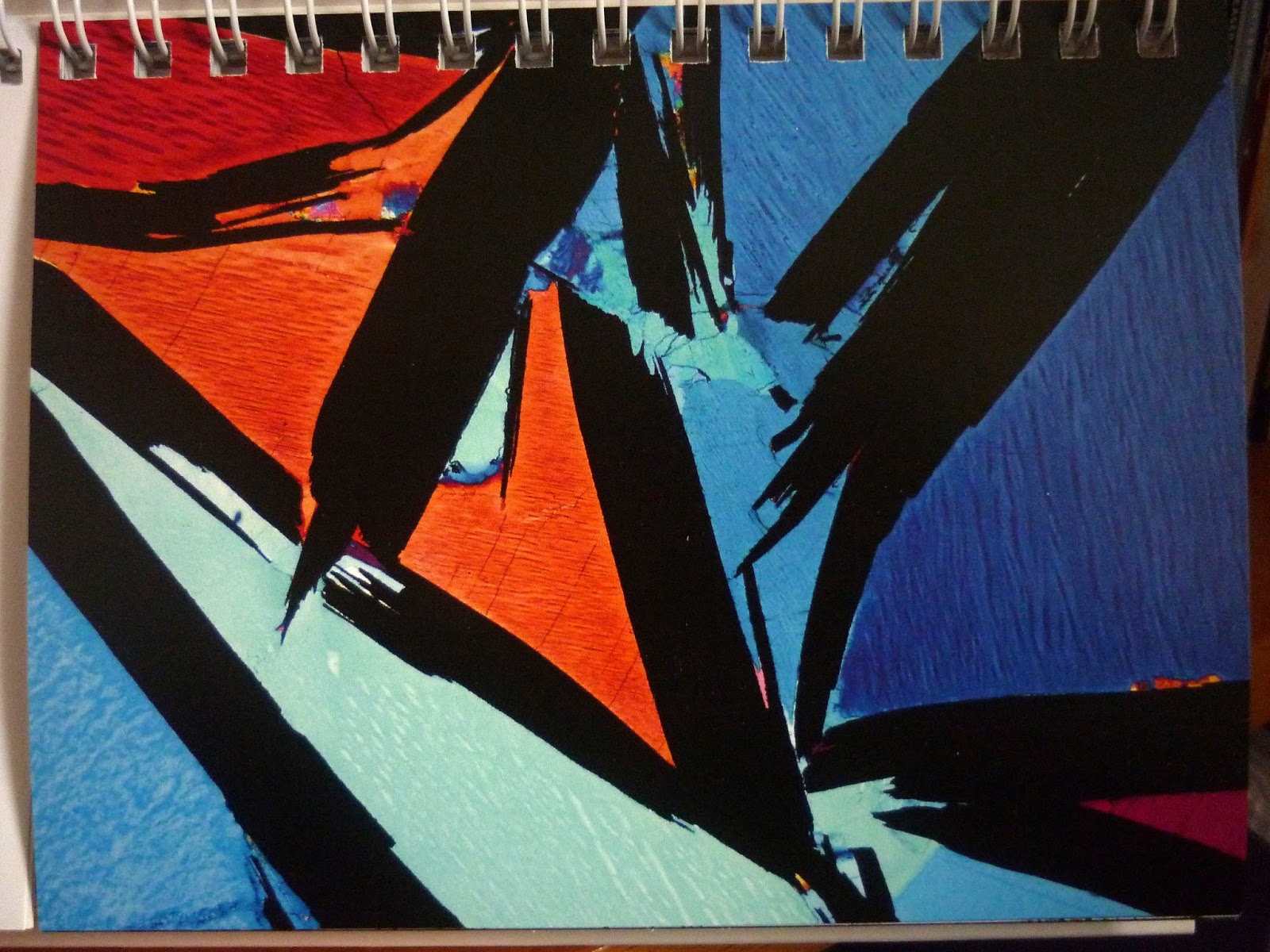 The photo is called Kaleidoscope and was a finalist in last year’s competition.  It’s by Bernardo Cesare, who is a Professor of Petrology at the University of Padova in Italy.  I’d not heard of Petrology before, and no, it’s nothing to do with petrol! Petrology derives from the Greek work ‘petra’, meaning rock and it’s the branch of geology that studies rock and minerals.

I’ll give you the blurb that goes with the photograph as it explains it much better than I could, being somewhat deficient in petrology knowledge.

“A geological event in Kerala, India, half a billion years ago, at extreme heat deep within the continental crust, gave rise to this crystal formation.  The black mineral, like frames in a stained-glass window, is graphite, traversing panels of quartz and feldspar.”

I present to you my interpretation of Professor Cesare’s photograph.

“A neurological event in London, United Kingdom, half a week ago, at extreme concentration within the cerebral cortex, gave rise to this sartorial formation.  The black accessories, like frames in a stained-glass window, are leather, suede and beads, traversing panels of cobalt blue and orange.” 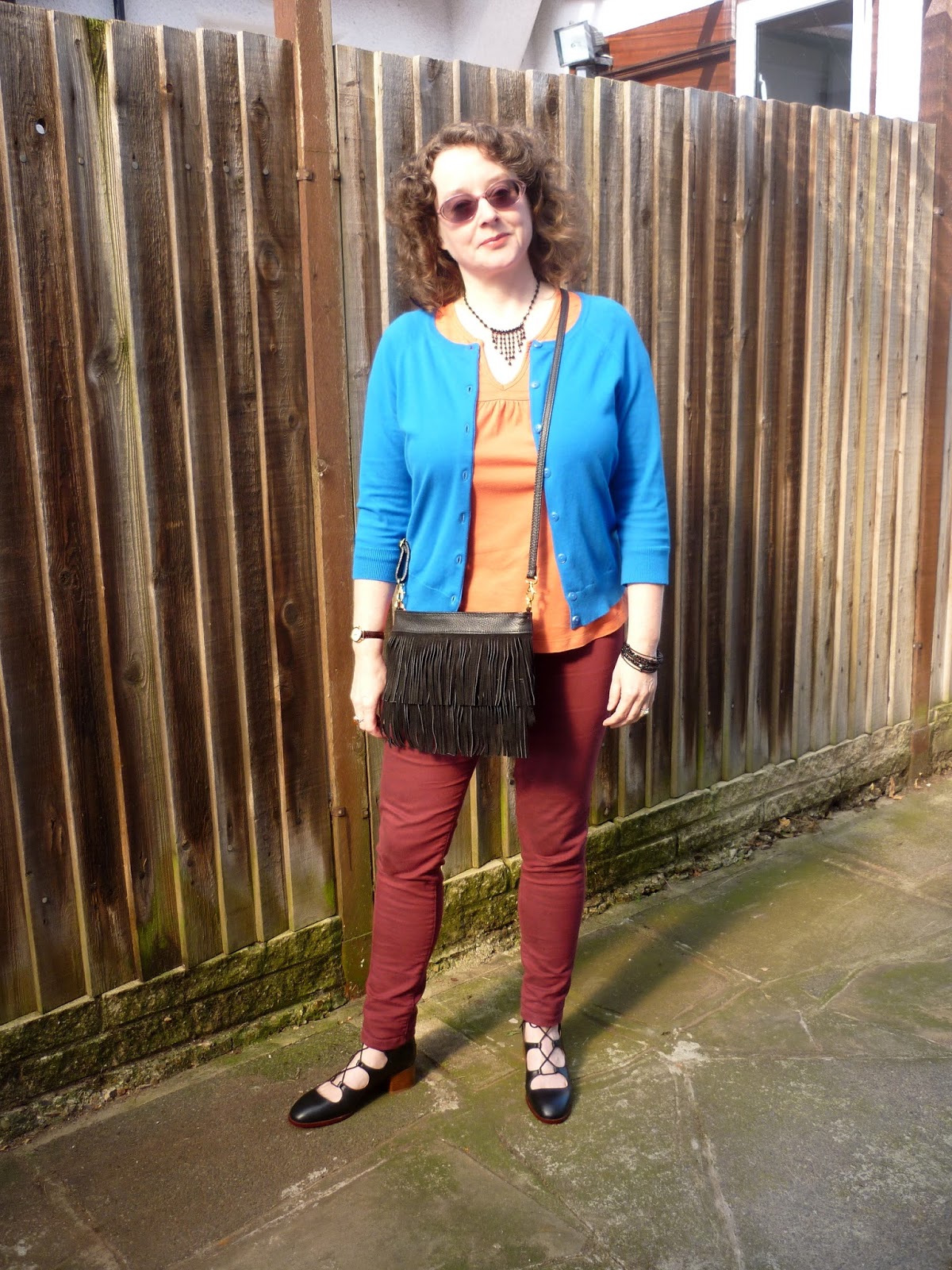 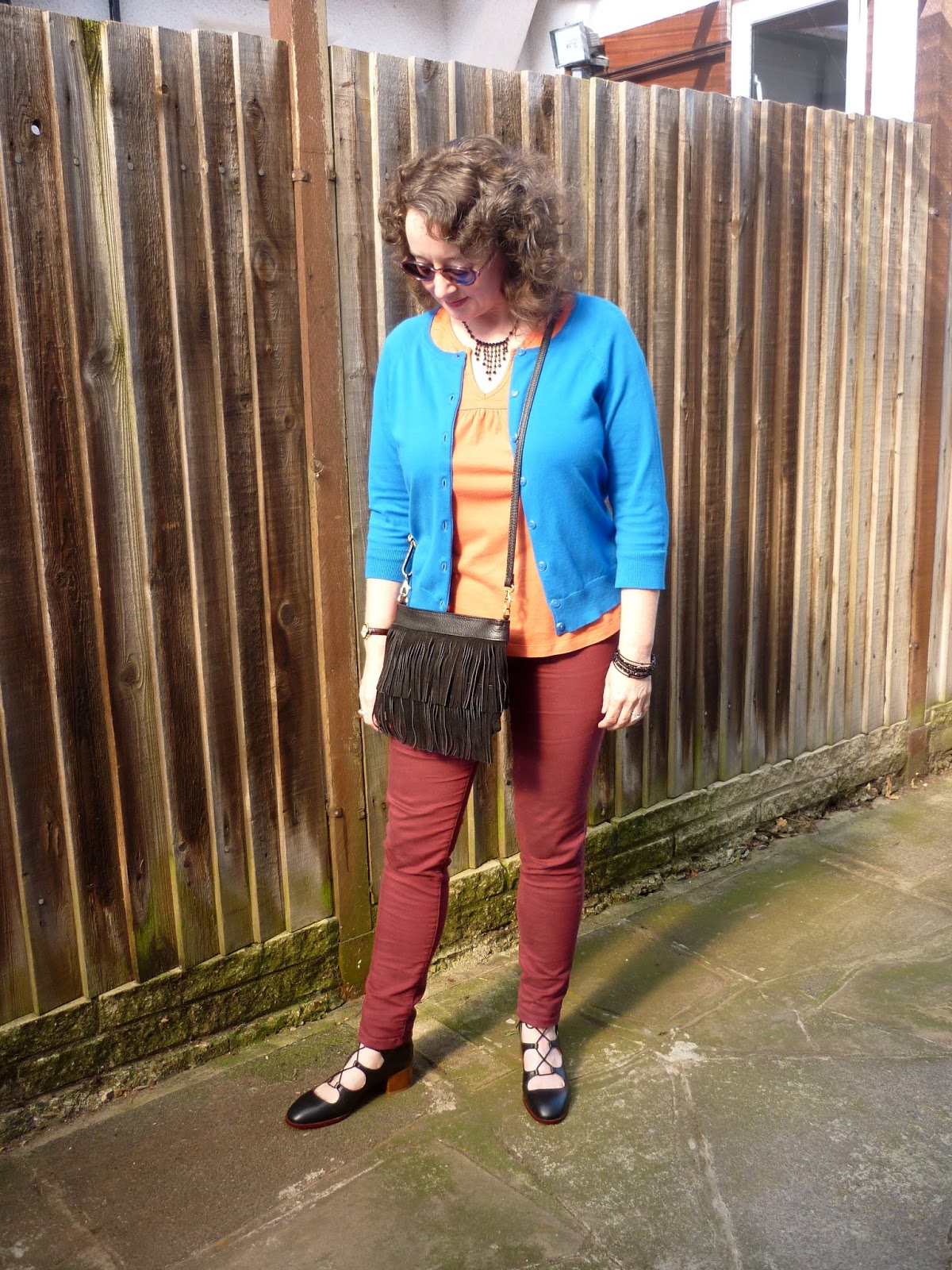 How did this neurological event occur?  I was pondering the photograph one evening last week to give my eyes a break from my laptop screen and saw the deep red in the top left hand corner.  It clicked that it was very similar to my Autumn Seasonal Skinny.

I knew I had a blue cardigan, then I remembered I had an orange t-shirt and by now the synapses of my brain were in overdrive. I thought, oooh, the accessories could be black, like the graphite and before I knew it, I was racing upstairs to put everything together!  Just as in the photograph, I love the bold, colour blocks, that are broken up by the black.

Cobalt blue and orange are a classic combination but I never thought they would also go so well with marsala (fancy name for burgundy)!  I’ve an outfit that totally fits October; the orange and marsala are such Autumnal colours and the vivid blue is synonymous with the wonderful blue skies we’ve been having the past couple of weeks. 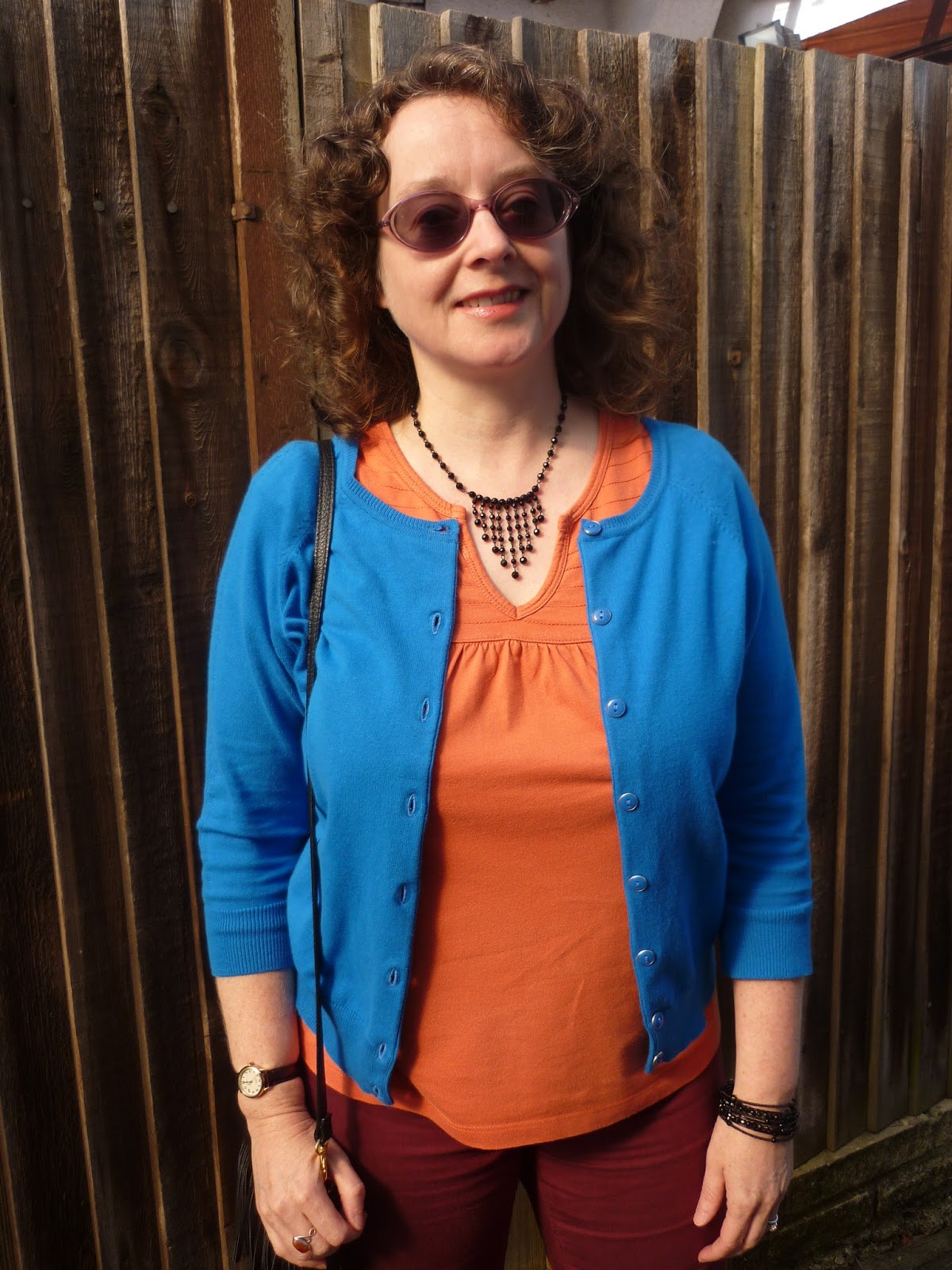 My delicate waterfall necklace couldn’t sit more comfortably in the V of the t-shirt if it tried and although the necklace and bracelet cuff look like a matching set, they were actually bought separately but because they are similar in style, usually end up being worn together. 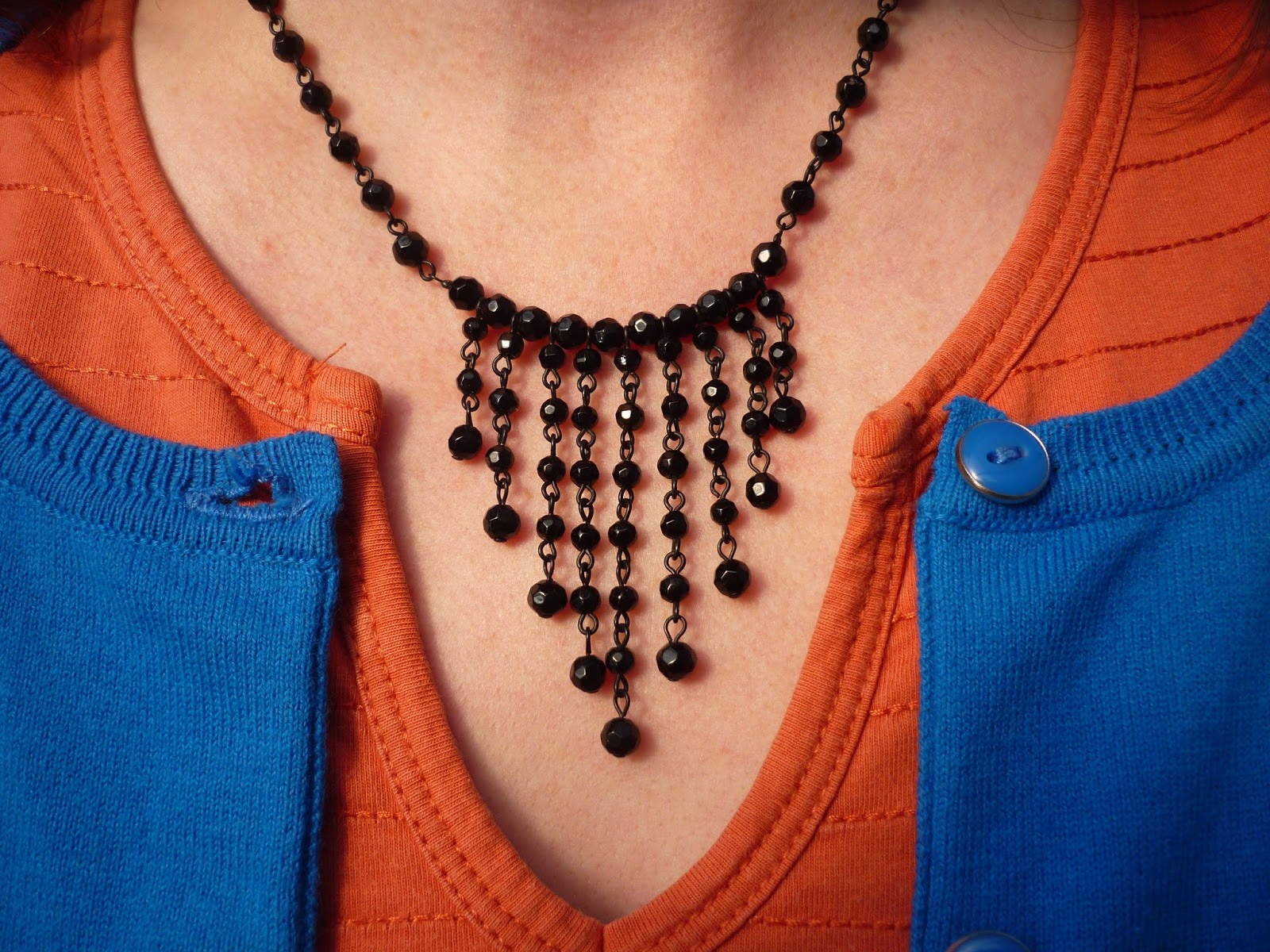 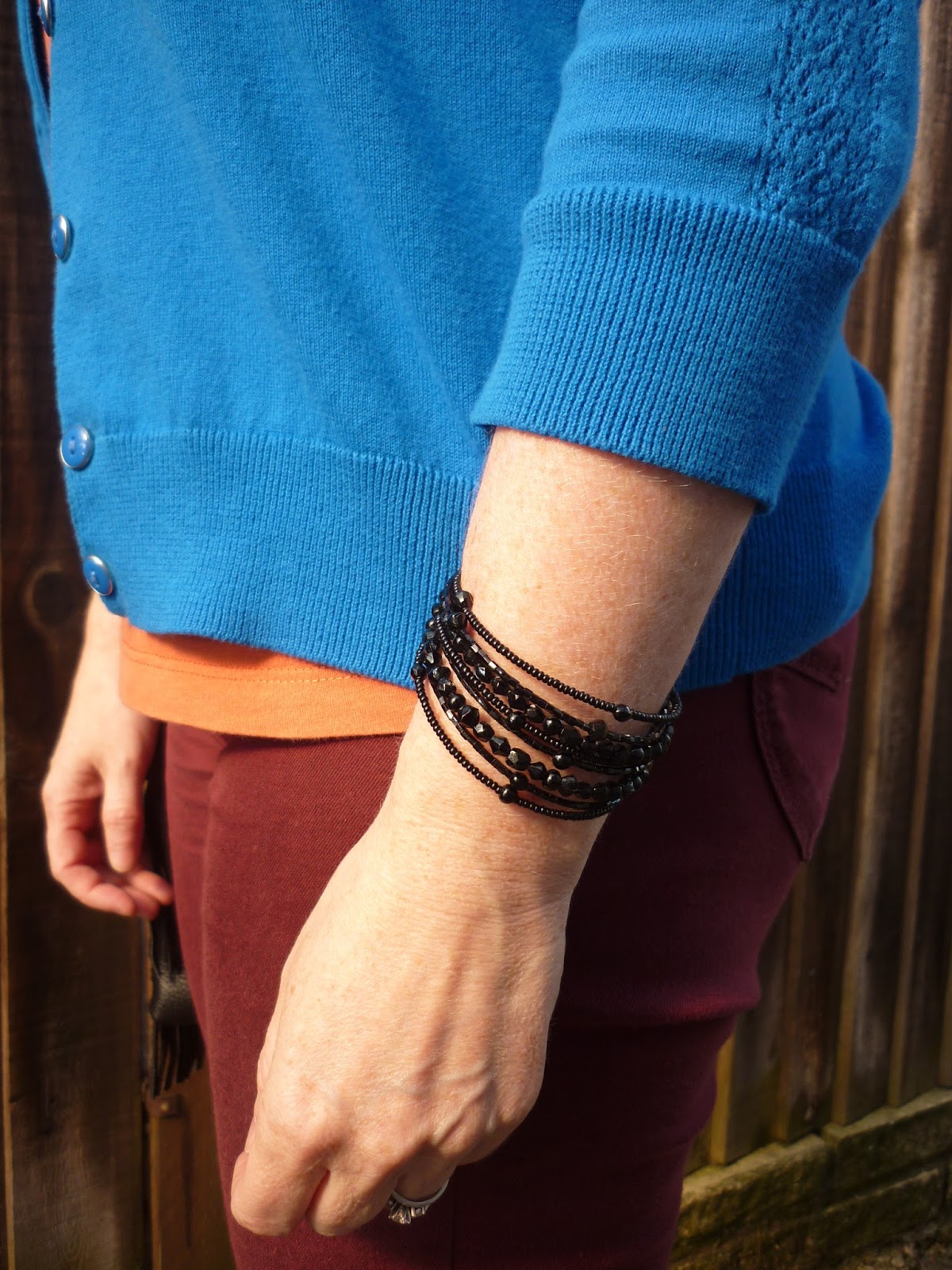 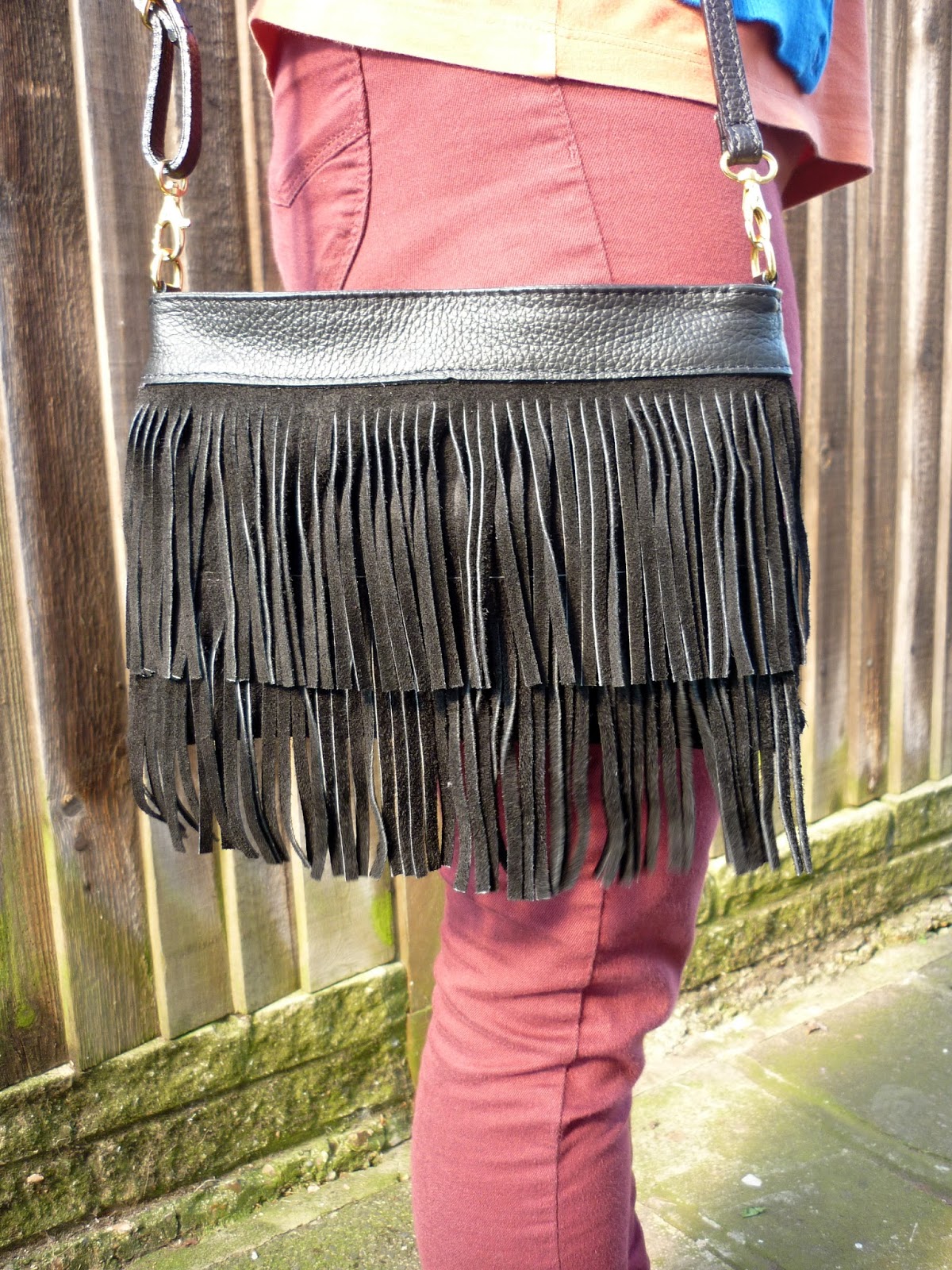 And my new Ghillies are back out on display for a second time having worn them in my Summer Clothes in Autumn post.

I love how the laces criss cross which tie in with the graphite criss crossing in the photograph. 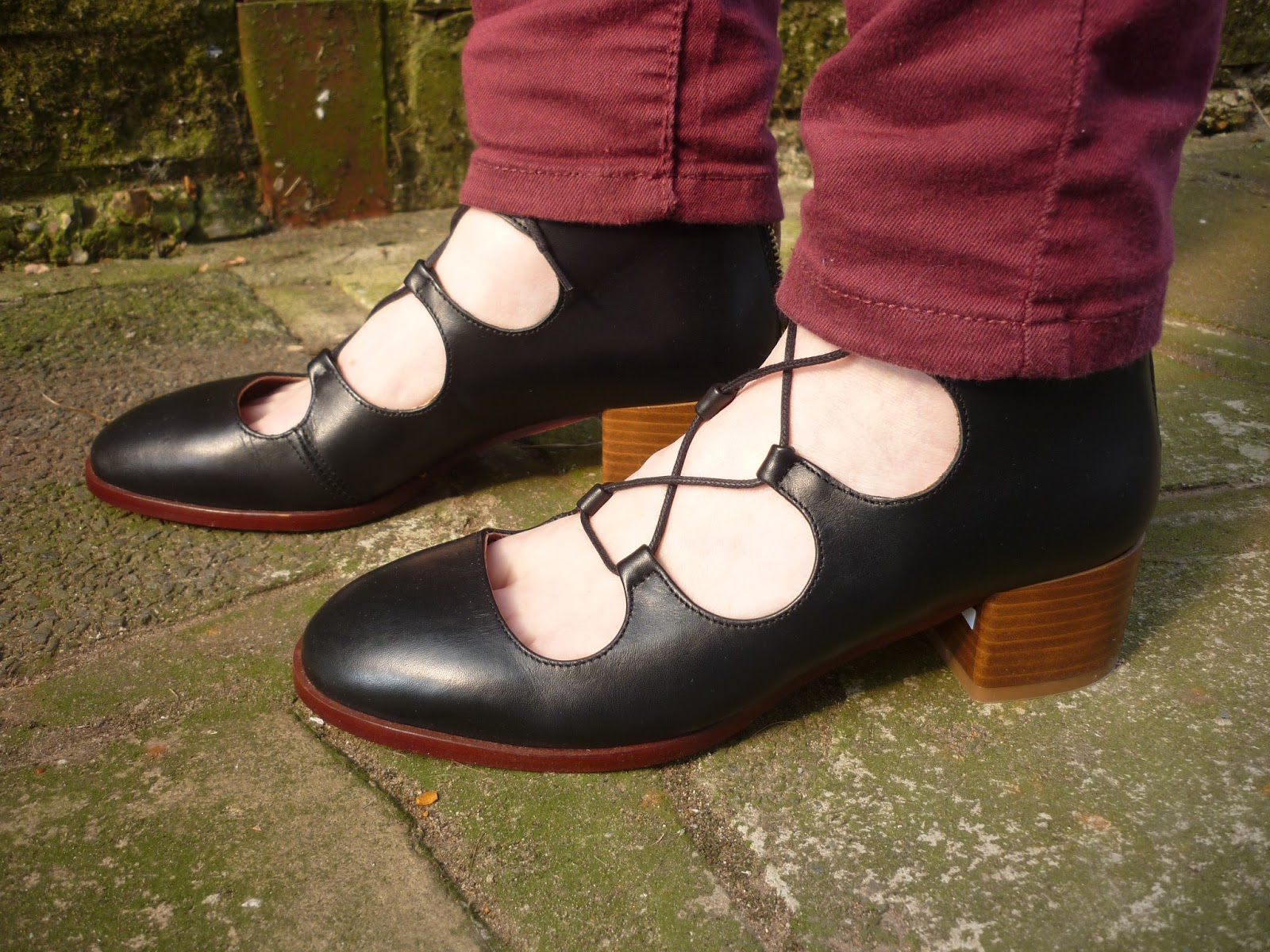 And the back view showing the zip detail making them easy to slip on and off. 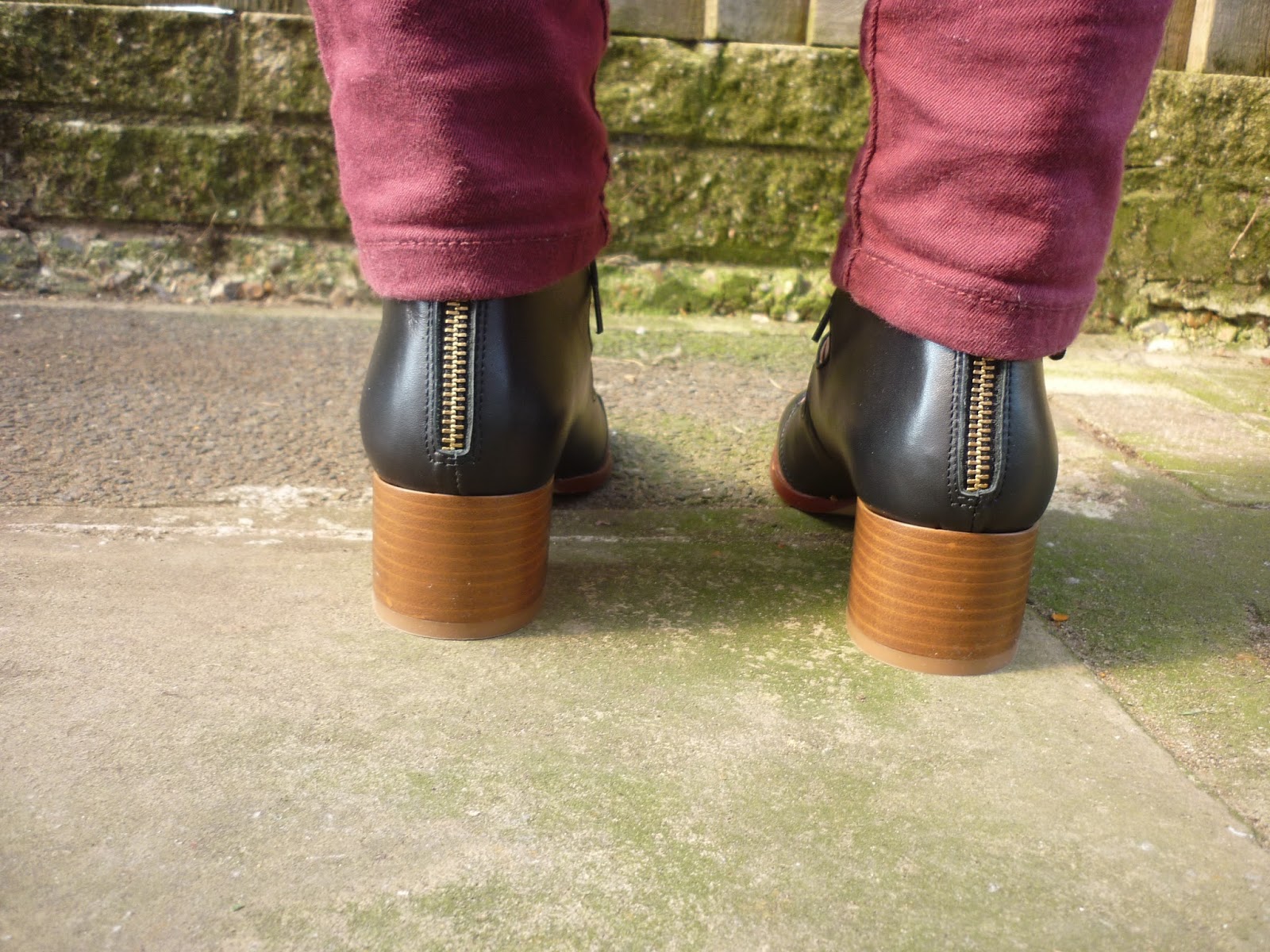 Joythestore Suede Fringe Bag.  In store but not currently on their website.  Comes in 4 other colours – navy, red, caramel and a purply pink.

Waterfall Necklace and Black Beaded Cuff from the Emporium of I Forget! 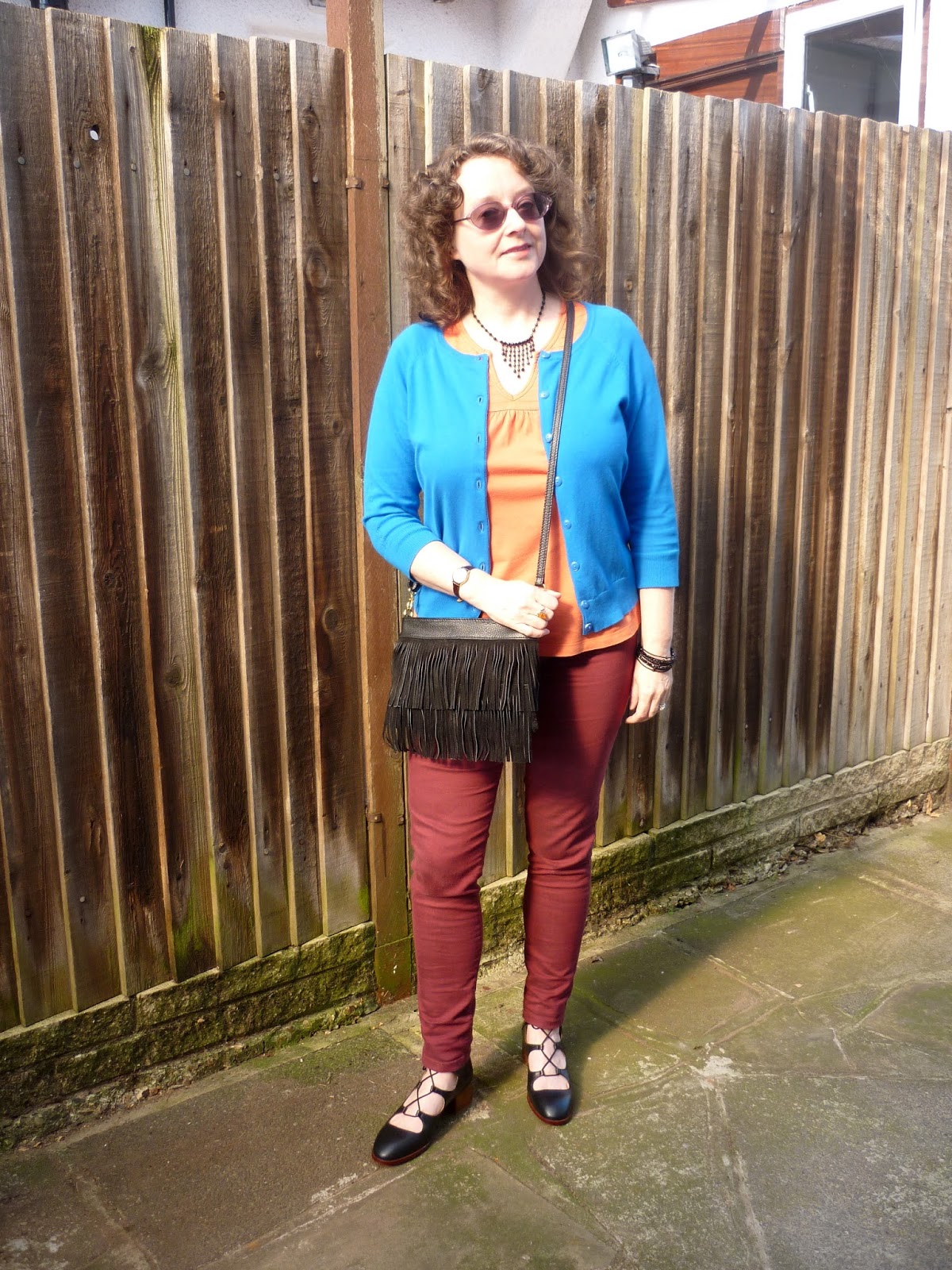 If you like Professor Cesare’s photograph, check out his website MicROCKScopica, where you can find more of his extraordinary images AND even buy his work.

And the winning entries in this year’s Wildlife Photographer of the Year can be seen in the annual exhibition at The Natural History Museum, running from 16th October – 10th April 2016.  It’s one of the most fabulous photographic exhibitions and TallBrownFox and I have gone every year for about the past 6 or 7 years.  If you can’t get to London, don’t worry, it usually goes on tour around the country and then internationally.  Wildlife Photographer of the Year

Do you draw inspiration from nature, art or photography?  Let me know in the comments below, I’d love to hear.