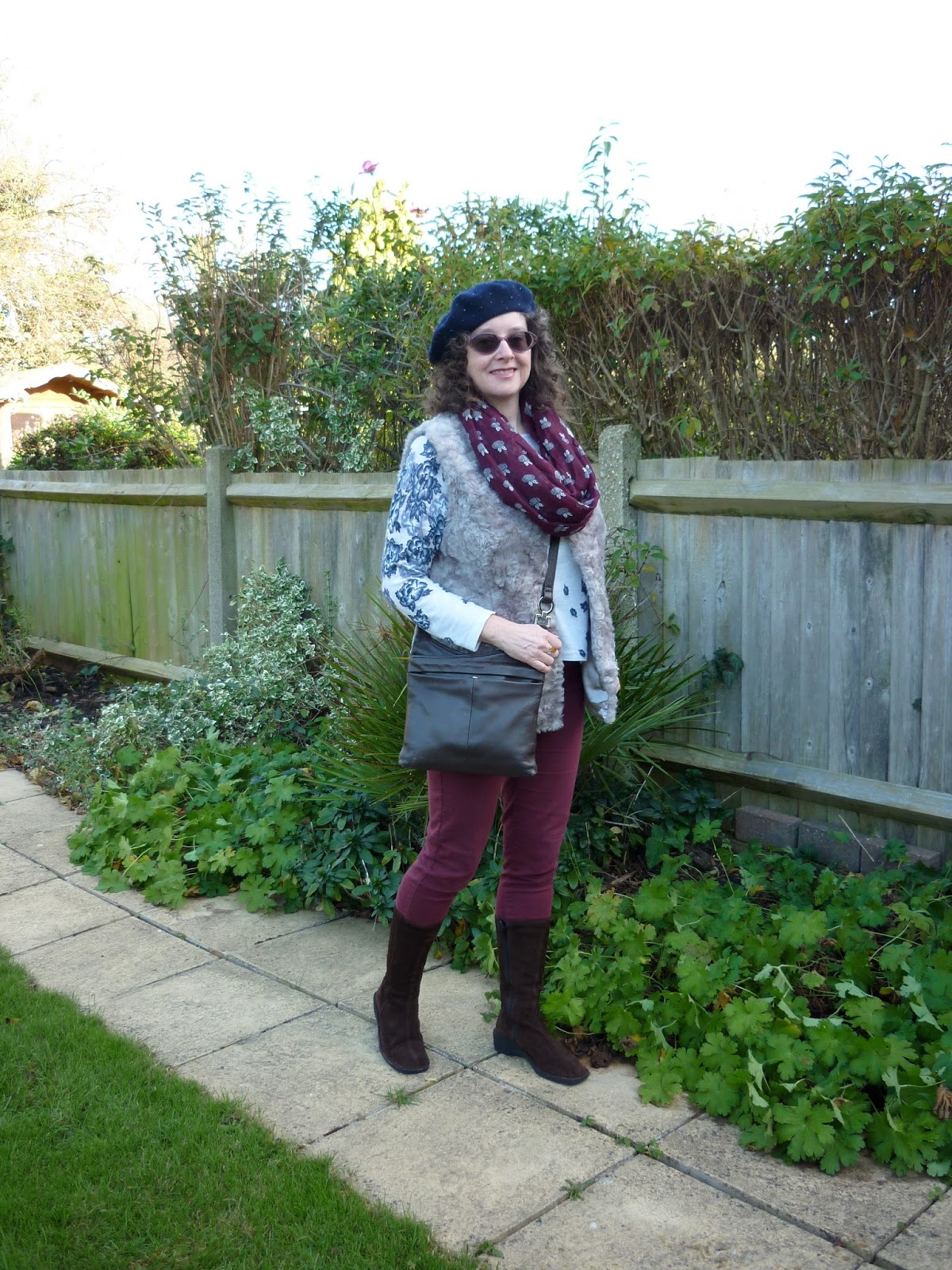 Before everything hibernates for Winter (including me, it feels on some days!) and because I’m almost at the end of the Autumn section of my Seasonal Skinny Challenge, I’ve a naturalist theme this week!  We’ve a display of flora and fauna with a chinese blue floral patterned jumper and wise owls on a burgundy snood.

Despite there being only two main colours – blue and burgundy – a closer look shows we’ve subtle plays on textures; suede boots, faux fur gilet and wool and faceted crystals on the beret.

And said faux fur gilet is definitely earning its keep.  When I bought it earlier this month in the sale I wondered how much wear I’d get from it this late in the year but it’s proving it’s more versatile than I gave it credit, not least because it works with so many outfits, such as with my Shift Dress.  And it’ll still be going strong when Spring comes around. 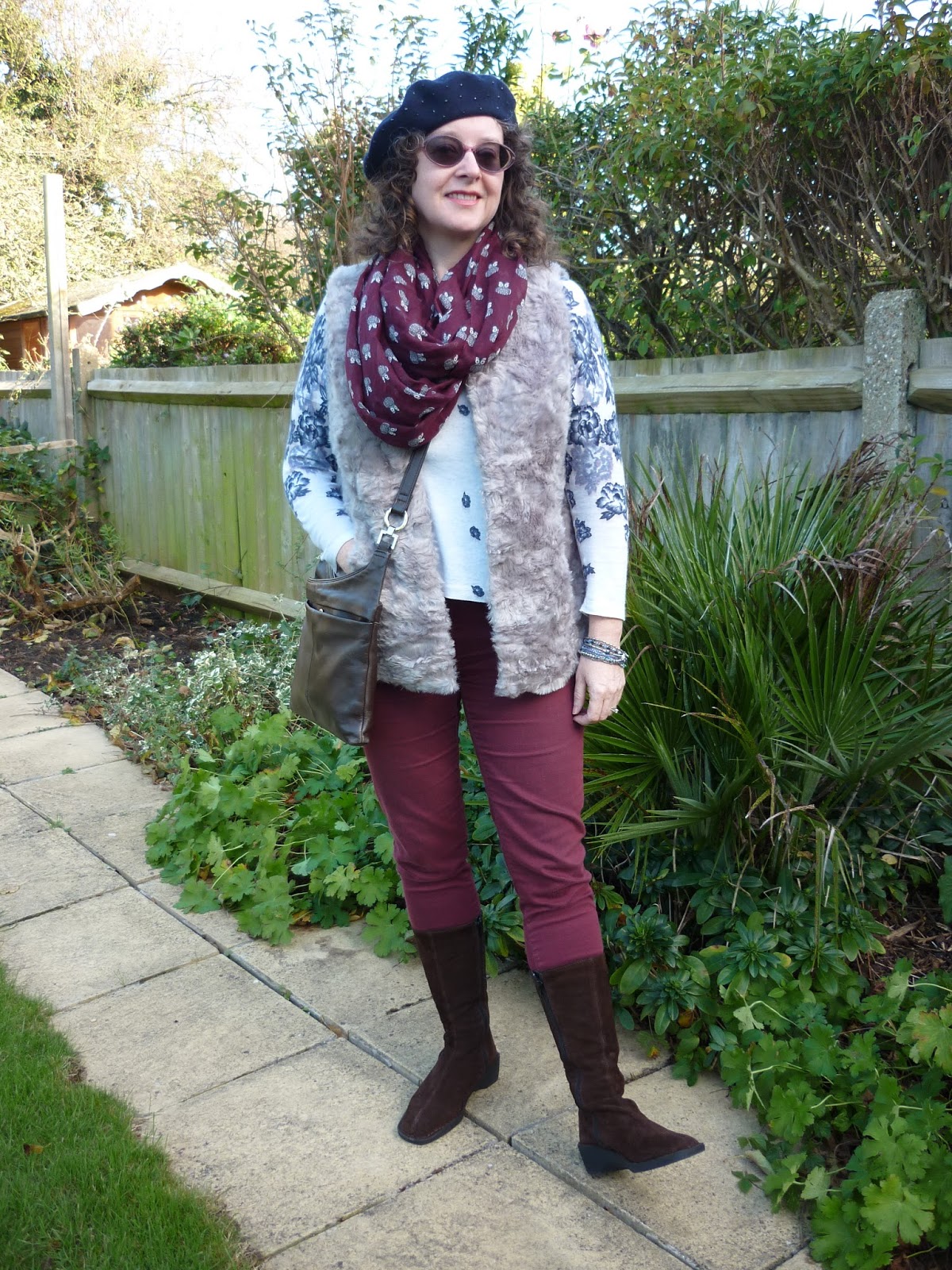 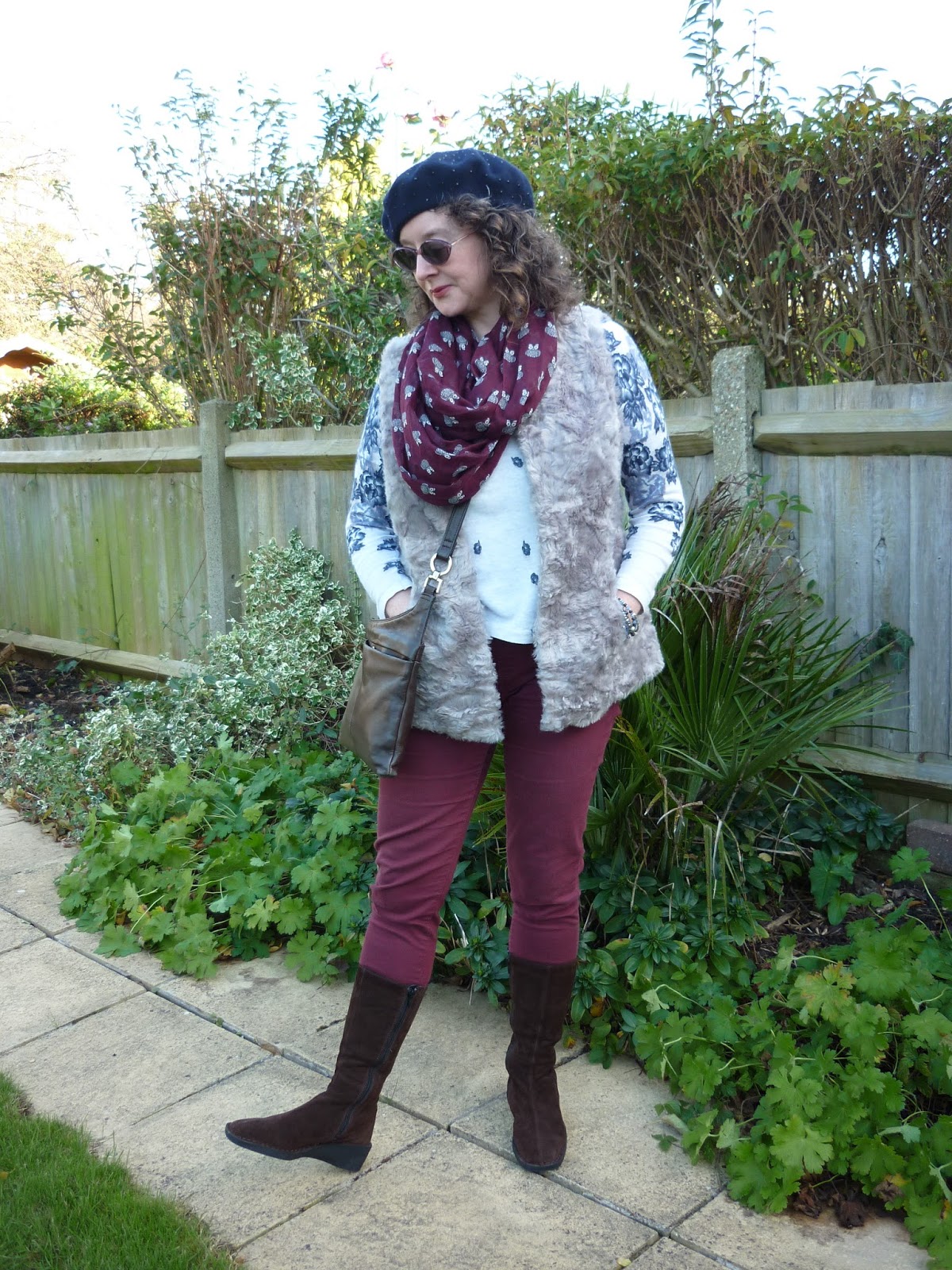 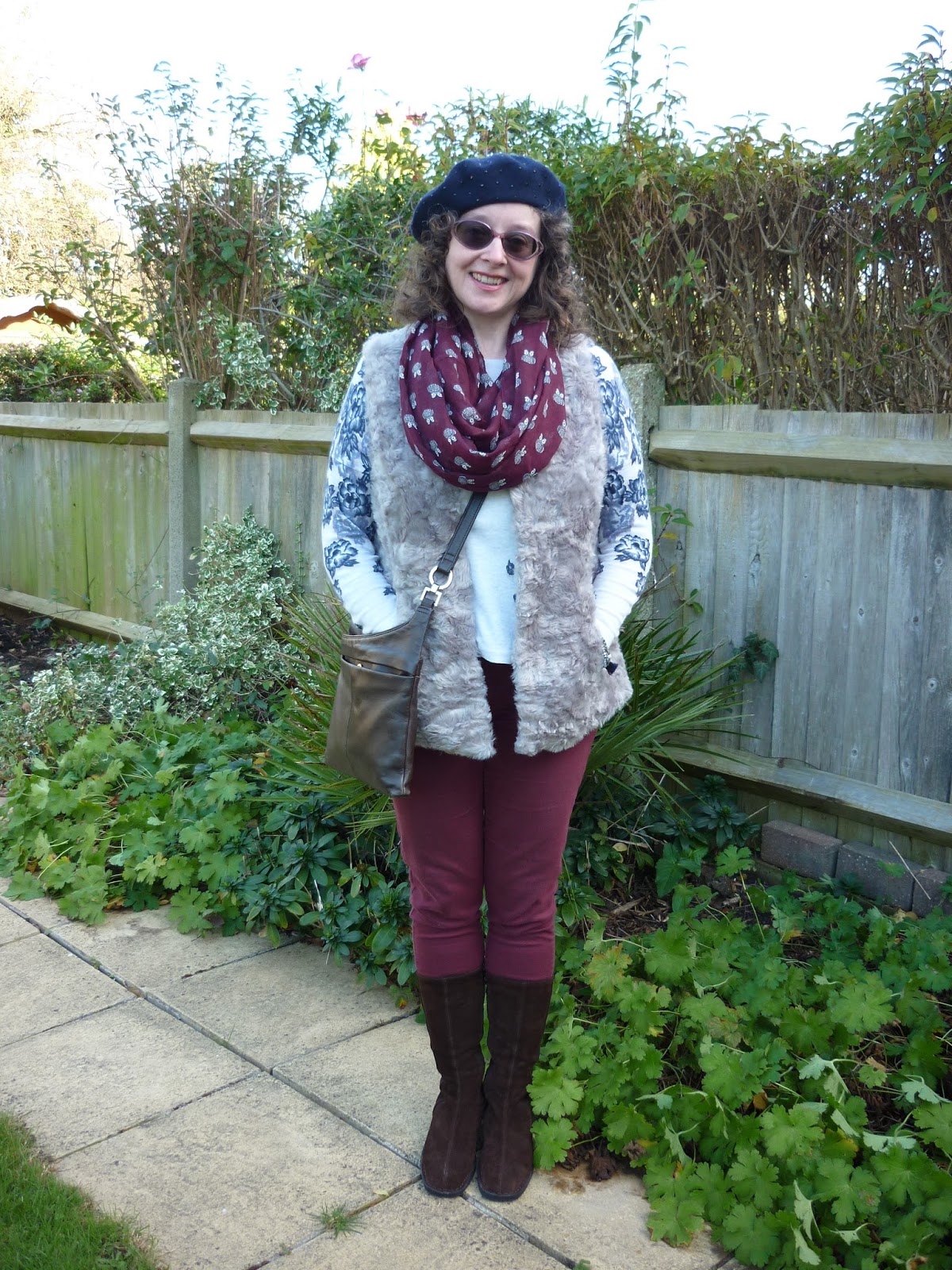 I’m wearing a Parliament of Owls with my snood.   Sounds rather grand, doesn’t it?   That’s the collective noun for owls.  Good thing I’m not wearing toads; that’d be a knot!

Renown throughout culture and literature for their wisdom, in Greek mythology the owl is the symbol for the Goddess of Wisdom – Athena.  Not that I’m comparing myself in anyway to the Goddess of Wisdom.  Nothing so lofty!  I just like owls. Especially these ones; it’s as if they’re looking at you with wide-eyed curiosity and therefore are slightly surprised to see you!

It was rather bracing at the weekend, which translates as

‘Crikey, what’s happened to the temperature???’

The jumper is one that’s really more suited to early Autumn rather than late, as it’s a not a thick one. Despite wearing a thin thermal vest underneath it, it still needed layers so the snood, gilet and beret were definitely not just for effect but also for warmth!

I find wool berets do the best job of keeping my head warm, much more say than pom pom hats or beanies do.  And this one has a stylish twist with the crystals on it which in the right light, sparkle and glisten. 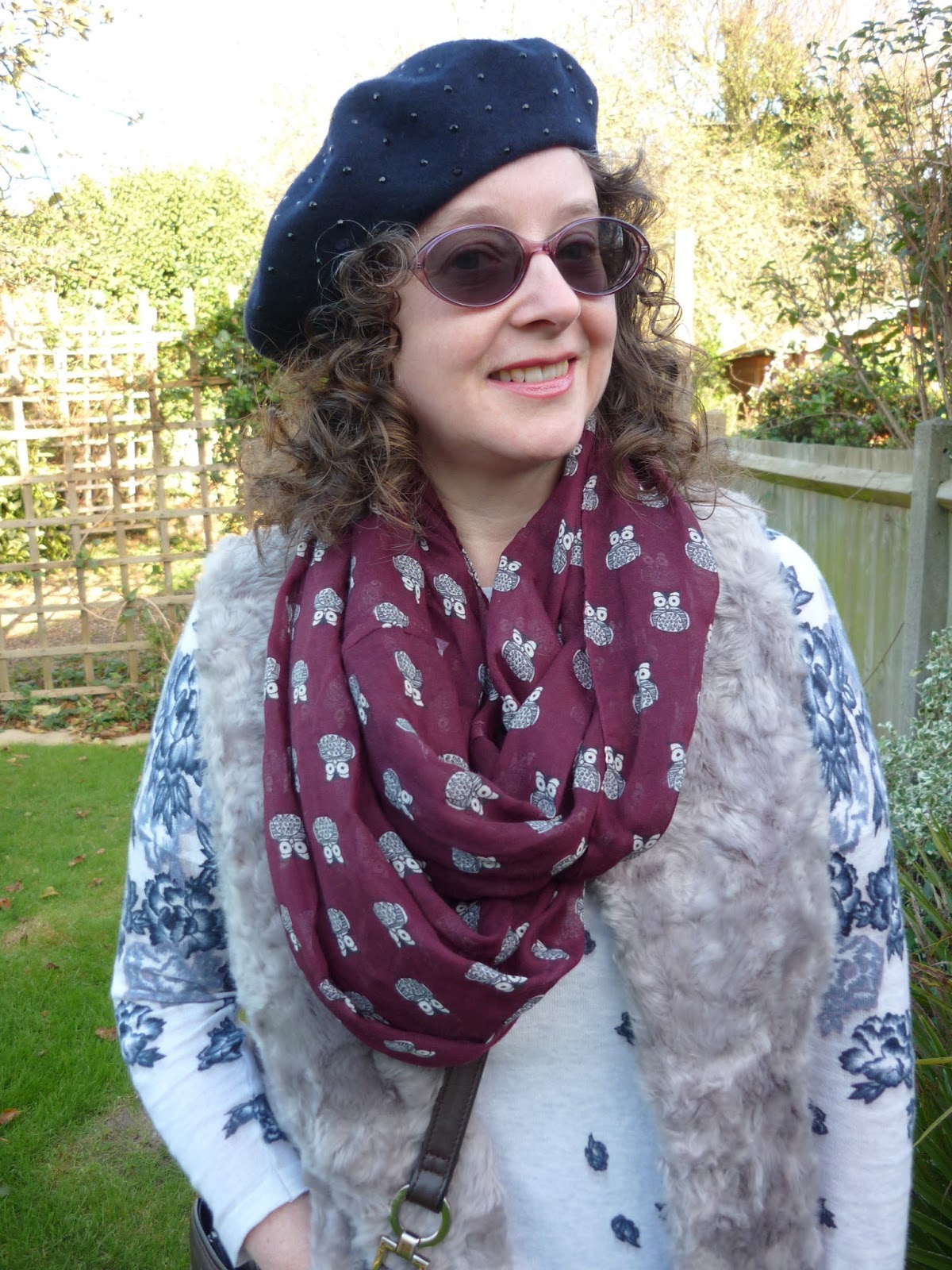 When taking the photos, Tall Brown Fox said this side on view looked like I had a tattoo sleeve down my arm, with the pattern and the colour being so vivid. At the time, I thought he was just being adorably odd in saying that but I can see what he means now!

It does rather look like an inking, in the way the pattern tumbles down the sleeve! 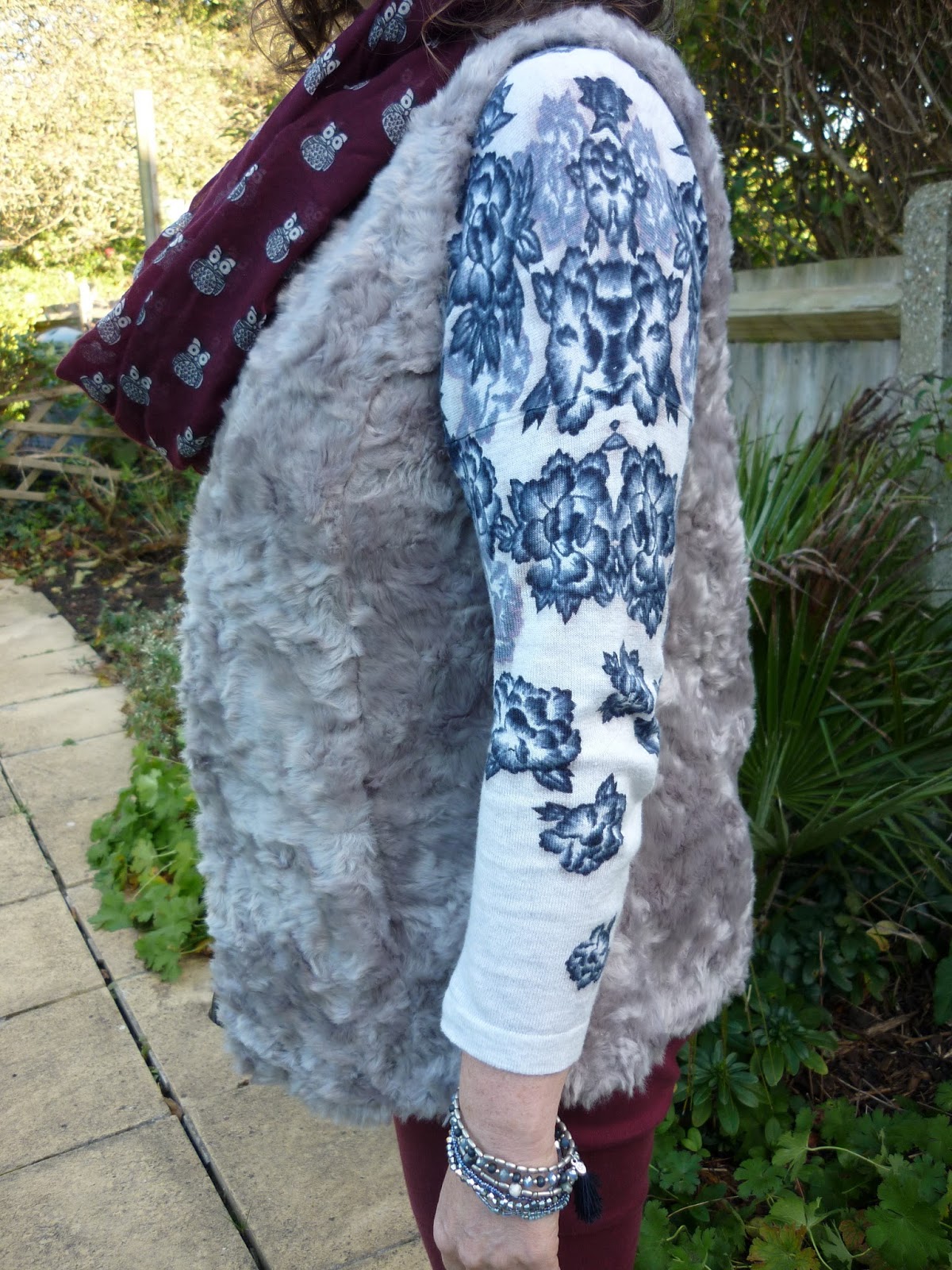 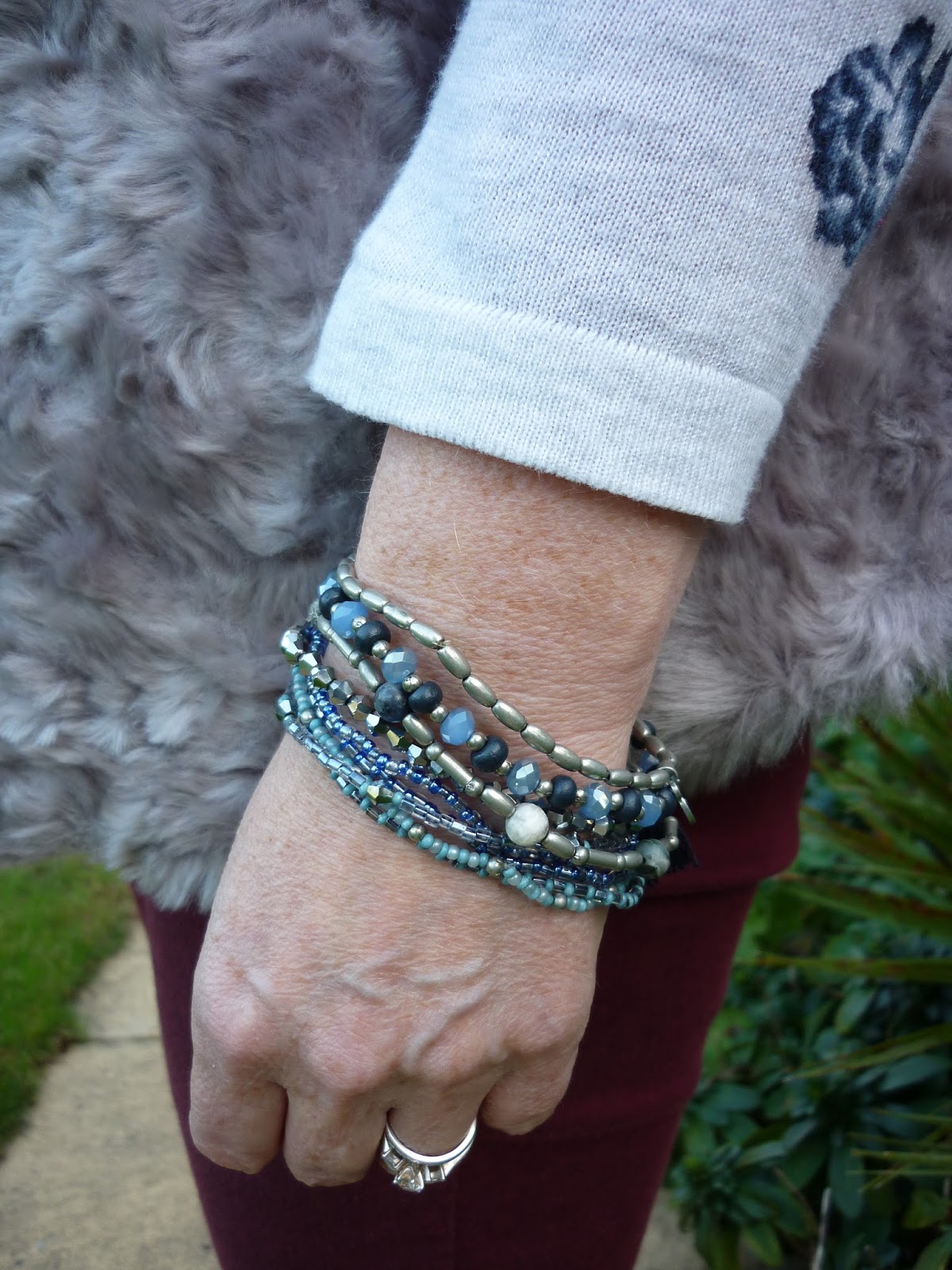 Last winter I went slightly mad with (no, invested in, invested in) boot buying on e-bay and nabbed several pairs of different styles of boots.  These ones were bought at the same time as my other suede boots I wore a few weeks ago in week 9 of my style challenge.  I always look out for M&S shoes; they’re such a good fit for my size 3 narrow feet and the quality is such that I’ve never had a pair from them that hasn’t lasted above and beyond their duty!

Although the gilet is grey, it’s really more mink in colour, so the brown suede boots work well with it and make an alternative to wearing black. 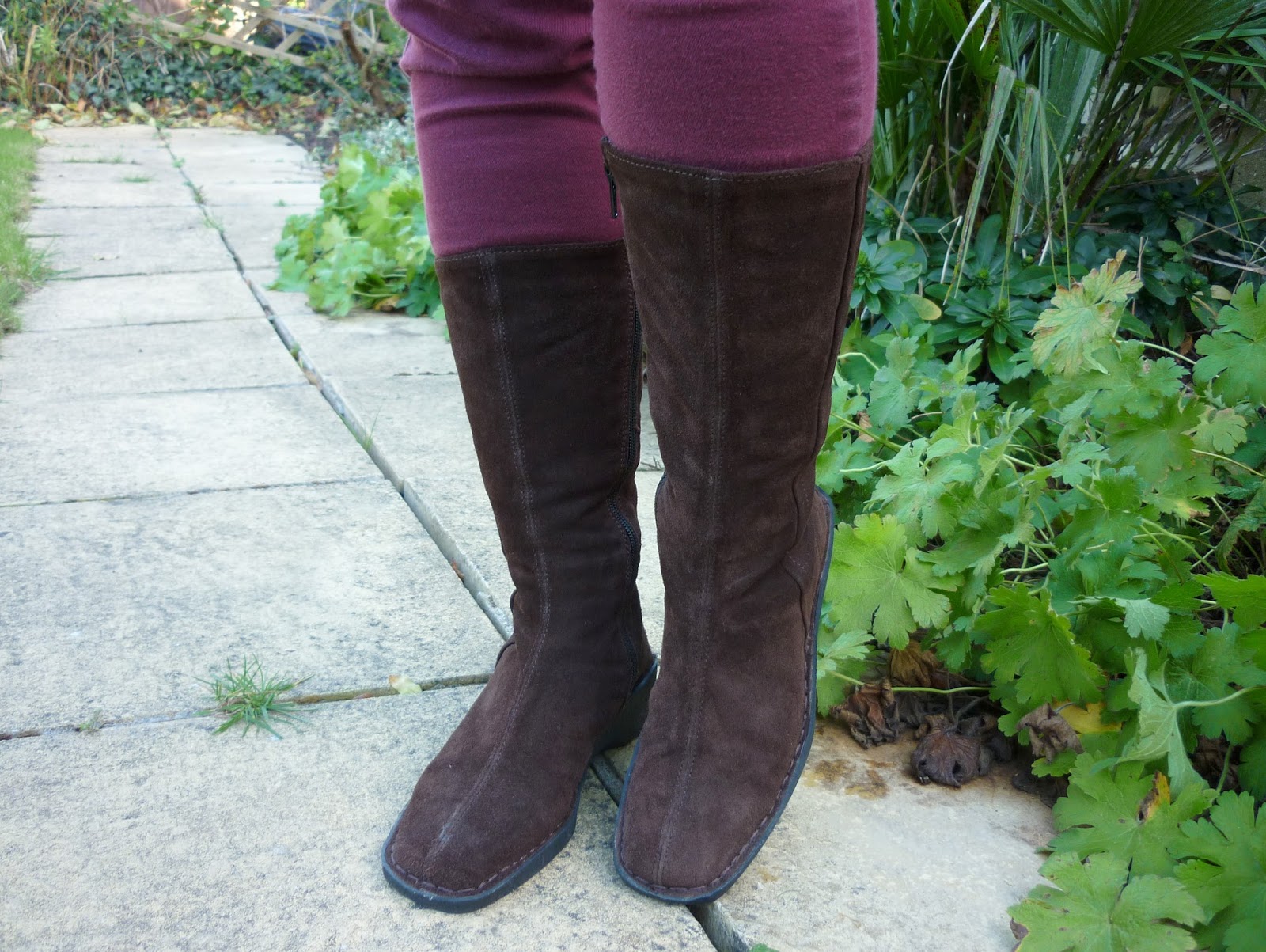 I think this shot says 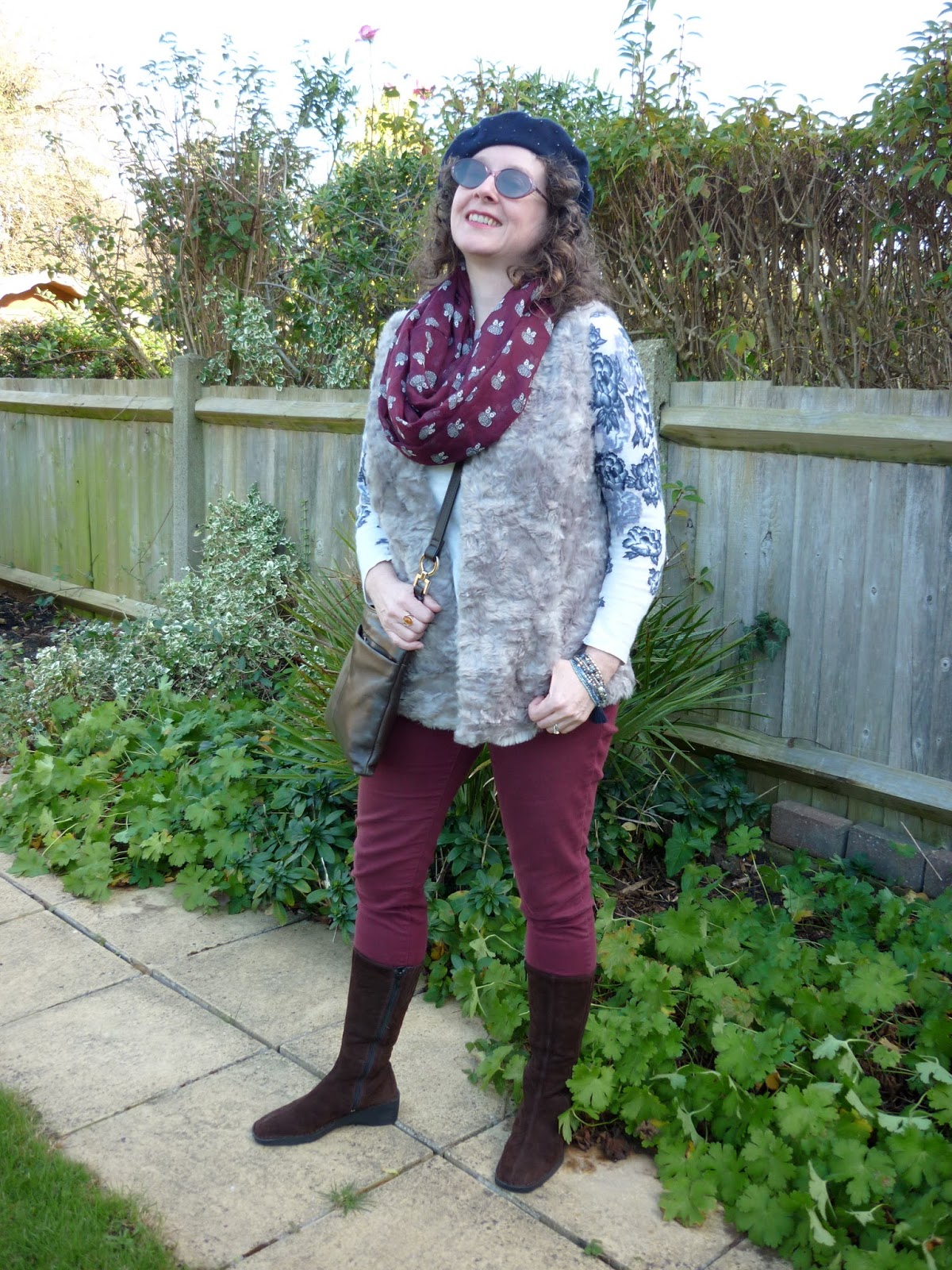 What are your favourite animal prints?

Next week will be the final Autumn Seasonal Skinny before the Winter challenge so do pop back for the Grand Finale!

You can read more about my Seasonal Skinny Style Challenge here.