Here I am standing underneath a bright orange sign, emblazoned with barbican on it. A building where

can be found; as clearly shown on the left! 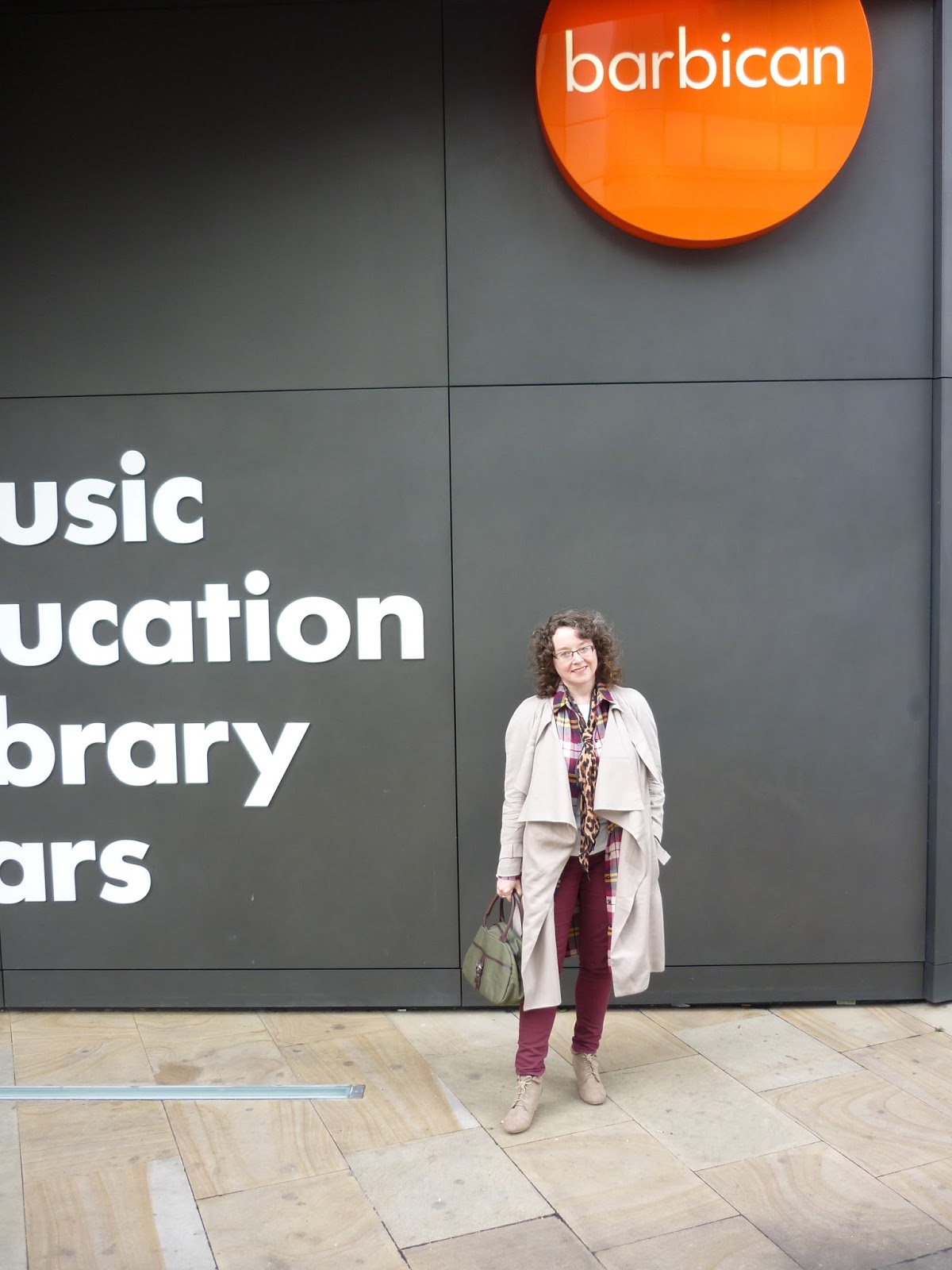 If you’re not familiar with the Barbican (music, education, library and bars), it is one of the biggest performing Arts centres in Europe. It’s a veritable cultural hotspot in this great City I’ve called my home town for 3 decades now. The Royal Shakespeare Company have their London base here, as well as the London Symphony Orchestra.  There are art galleries, a cinema and it houses the second biggest conservatory in London after Kew Gardens.  I mean it just oozes pizazz from every corner.

Being an unashamed culture vulture, Tall Brown Fox and I were there two Sundays ago as I’d booked tickets to the exhibition The World of Charles and Ray Eames.

On our way to the Barbican from the tube station, I couldn’t help but take some photographs of the extaordinary modern buildings that have sprung up in the City of London in the last few years.  I wonder what the Eames would have thought of this huge steel and glass building. 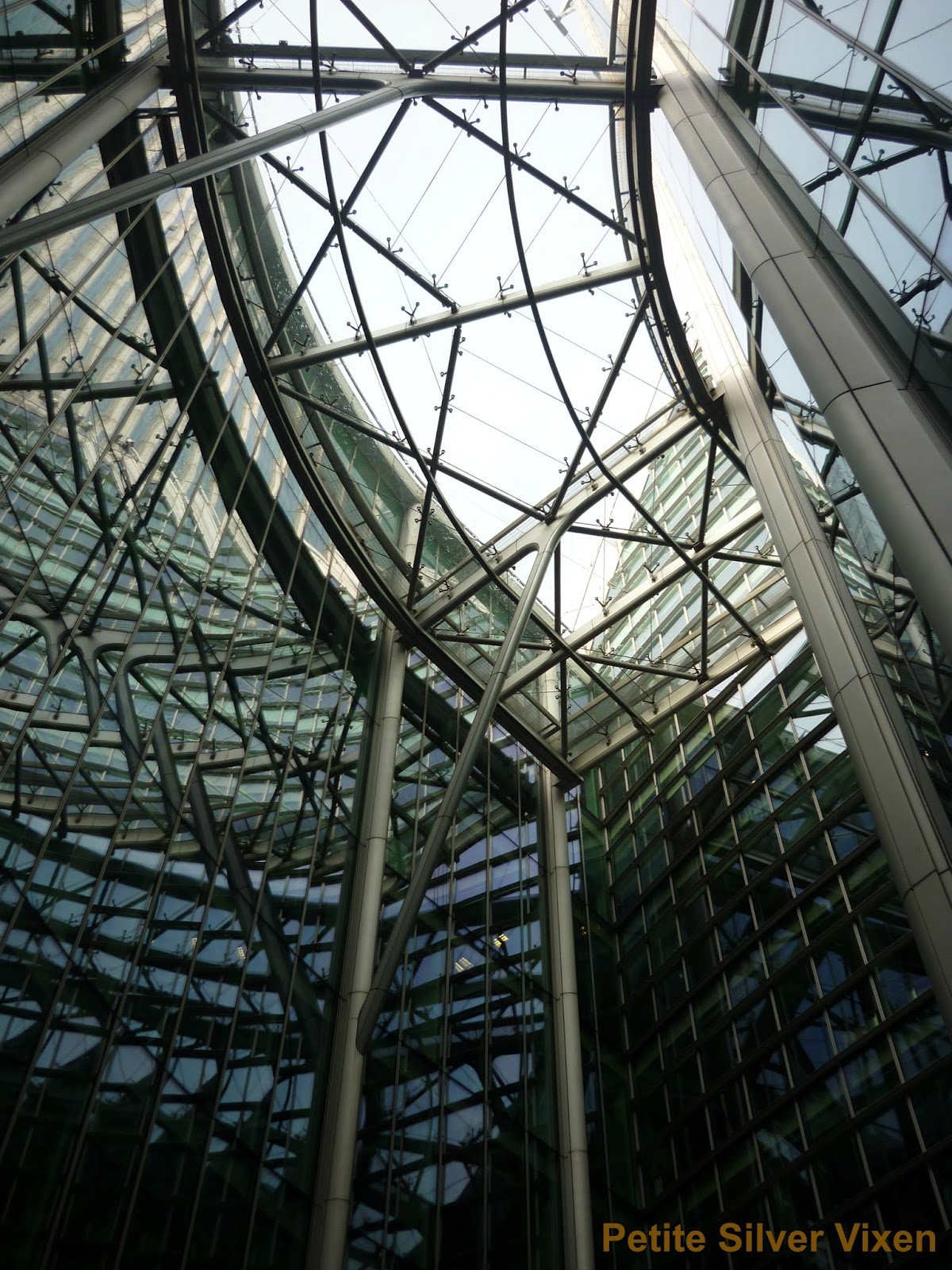 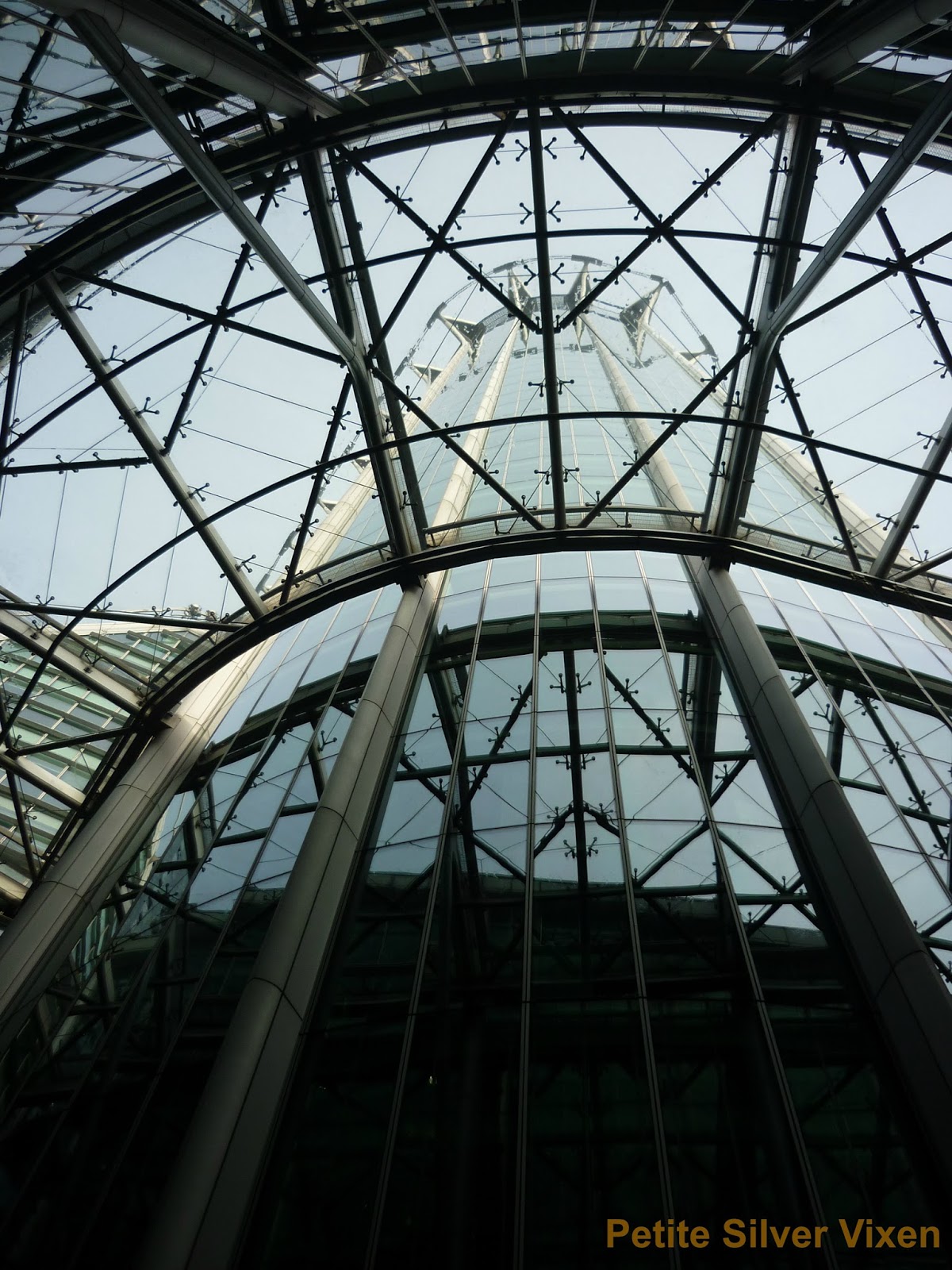 I can’t remember how or when I discovered their work – that’s long lost in the midst of time.  I knew their huge impact on design and in particular furniture, but what I didn’t know was the depth and breadth of their work.

It’s the first retrospective of their work for 15 years in Britain and I was determined to see it.  In the past I’ve missed exhibitions because I left it too late to buy tickets but not this time!

They were an extraordinary design team.

They designed a portable stacking leg splint made of plywood used by the US Navy in WWII which undoubted helped to save many lives.
They were great friends with the film director Billy Wilder and designed two chairs for him – the Lounge Chair and the Leather and Aluminium Bench – both of which are design classics – as well as a house for him.
Ray designed the opening credits typography used in the Wilder’s film ‘Love in the Afternoon’ and Charles worked on Wilder’s ‘Spirit of St Louis’.
The couple designed toys, games, buildings and major exhibitions that toured the world.
Charles was a prolific photographer.
And both made innovative films on a huge variety of subjects, many of which were on show during the exhibition. 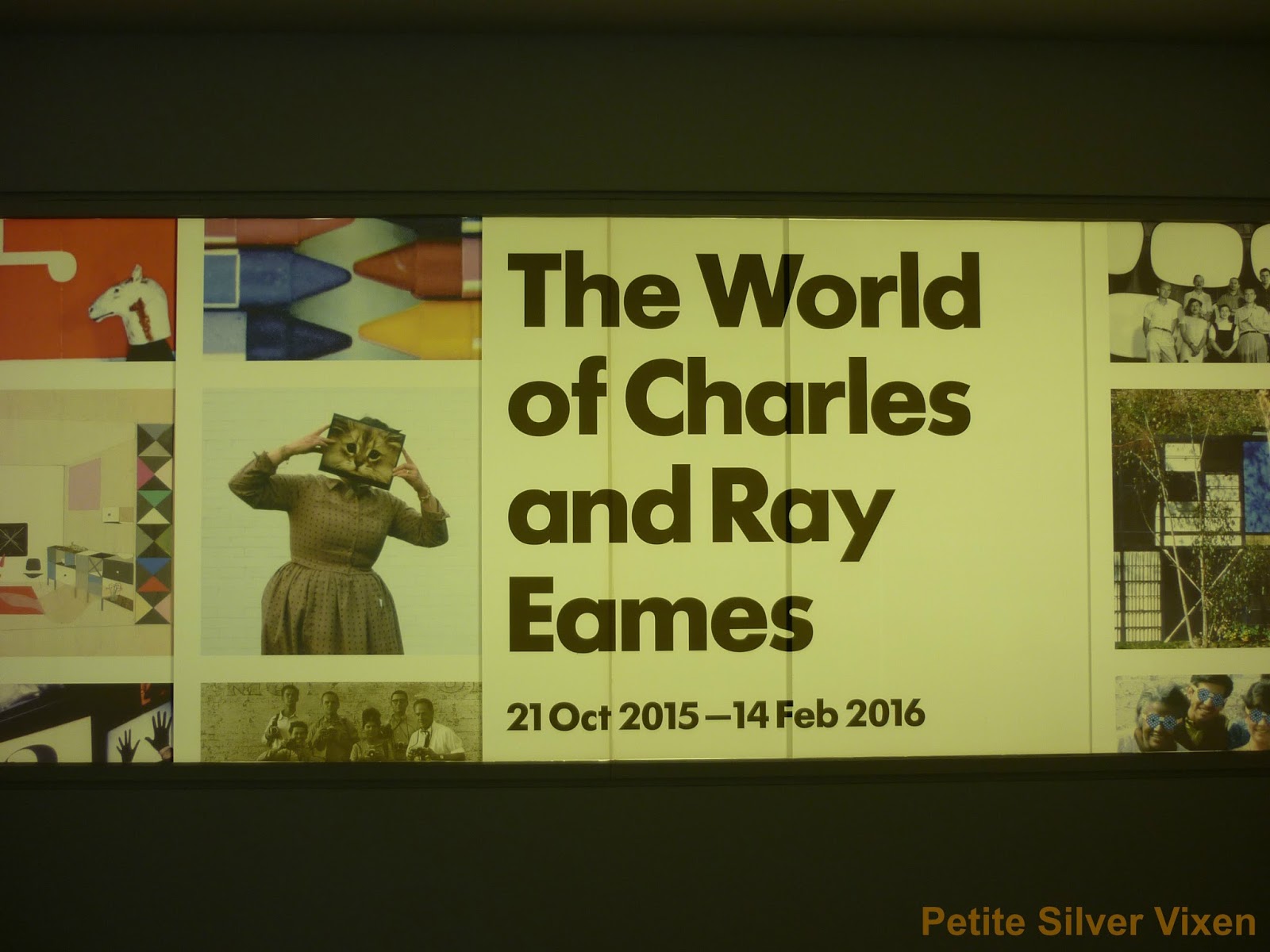 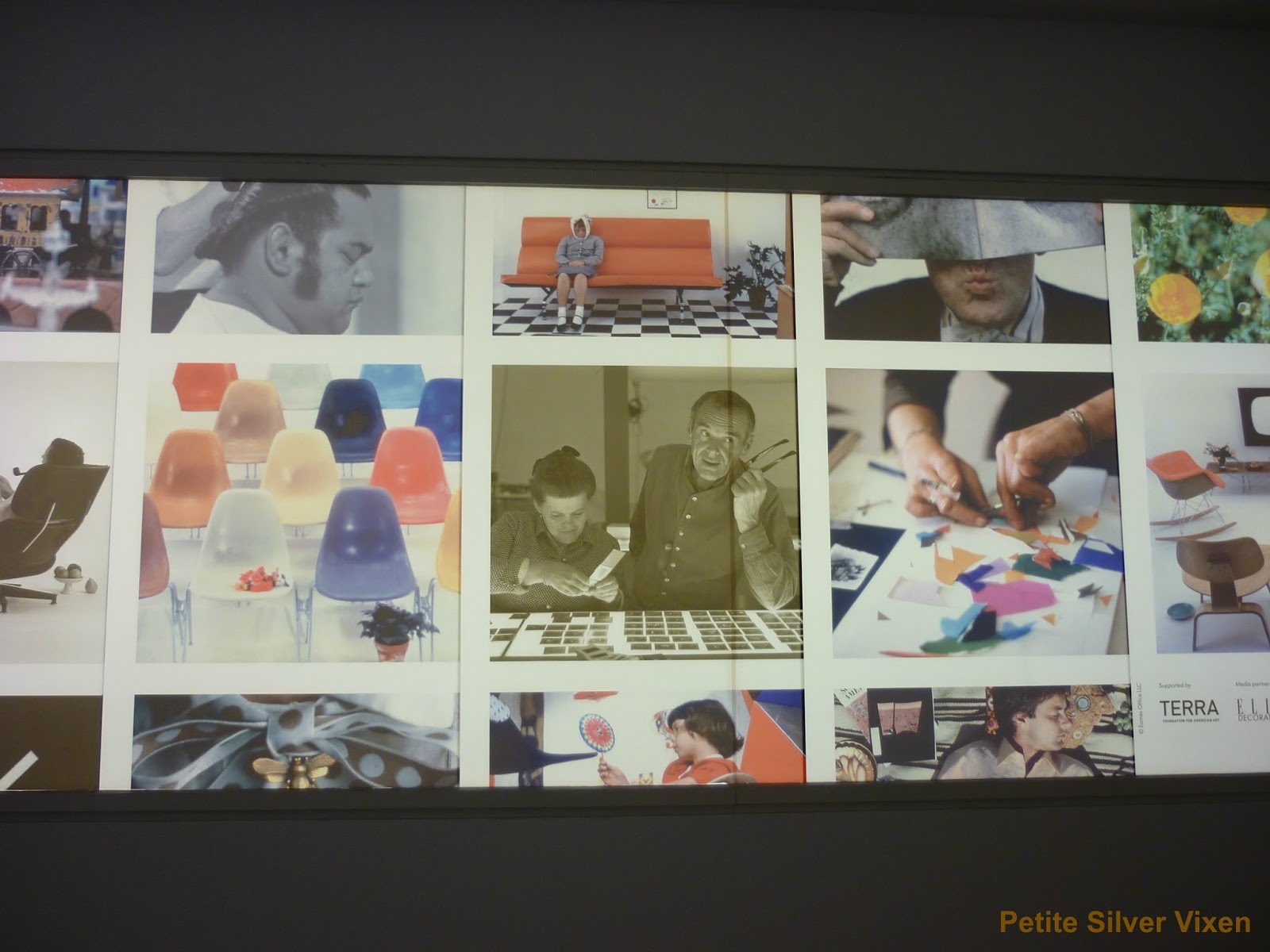 The exhibition is spread over two floors.  As with so many exhibitions it’s tight for space and in the beginning, there’s a lot of side step shuffling, as everyone jostles for position around the exhibits, especially the smaller pieces like the photographs.  Patience is a virtue at big exhibitions.  Hang around long enough near a particular exhibit and then you can nab a good spot right in front of it but it takes zen-like practice!

Understandably, we weren’t allowed to take photographs in the exhibition.  A blessed relief to be honest, as I just know everyone would’ve been click, click, clicking away on instagram and not actually be looking at and absorbing the exhibits themselves.

So courtesy of Creative Review, here’s one of their photographs showing an exhibit I really liked. Ray was a talented painter and she designed 26 covers of the magazine arts & architecture and all 26 are showcased in the exhibition.  Here are some of the 26.

There are more photographs in their article Ten Things to see at the World of Charles and Ray Eames.  Getty Images Courtesy of Barbican Art Gallery. 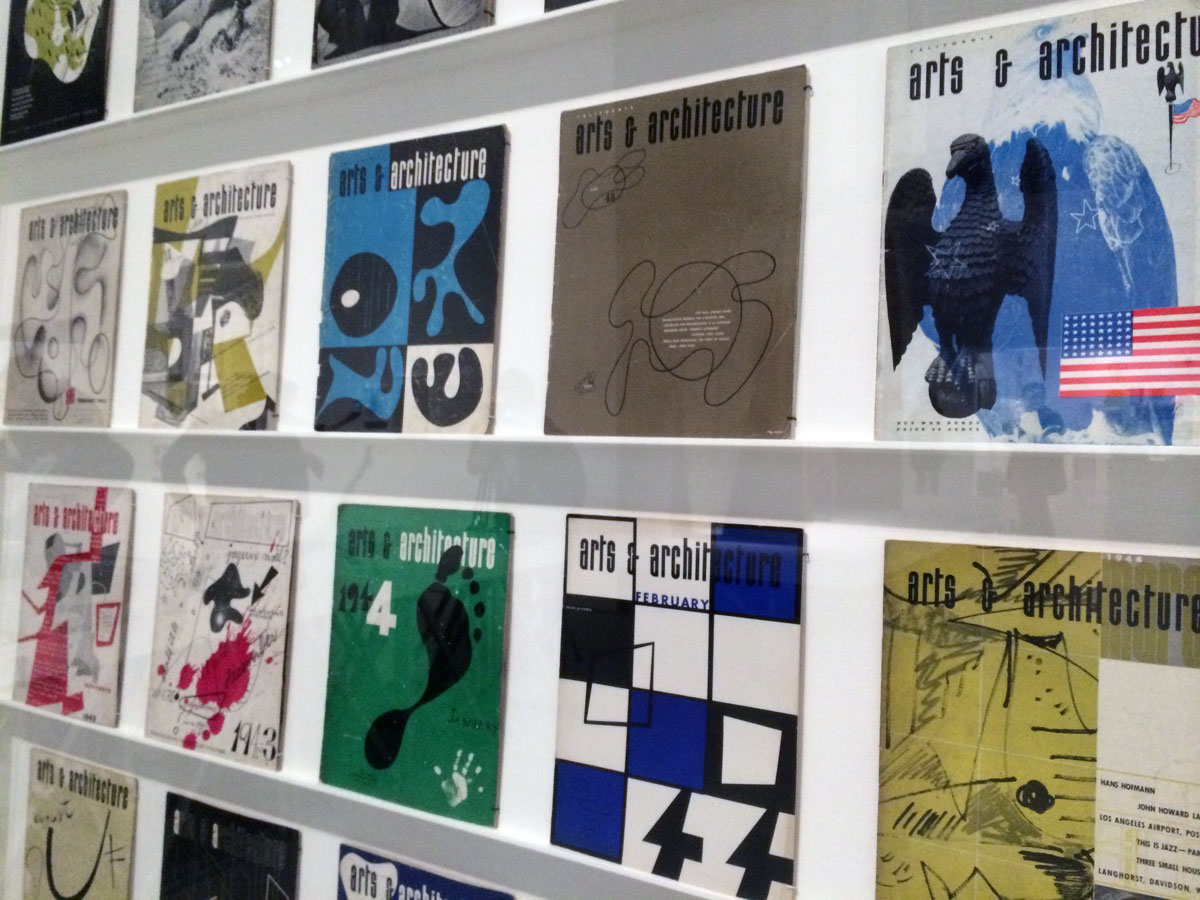 One item, not listed which absolutely would’ve been on my list of 10 is their giant vertical xylophone.

The below photos are not from the exhibition but shows the xylophone in situ at the house the Eames designed and lived in. They were taken by a fellow blogger when she visited the house and you can read about her visit to the Eames House.

This just epitomises their sense of play and creativity.  Drop a marble through the tube and as it hits the keys you’re treated to a tinkling piece of music as the marble travels down the length of the xylophone.  And if you get bored with listening to the same piece, swap the keys around and hey presto, you’ve another tune!

At the exhibition, one of the gallery assistants have a bag of marbles and from time to time, they drop a marble down.  I asked if he could drop one down for me, so Tall Brown Fox and I could stand at the side and watch it striking the keys on the way down and he very kindly did! 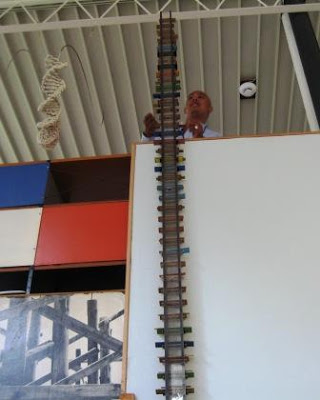 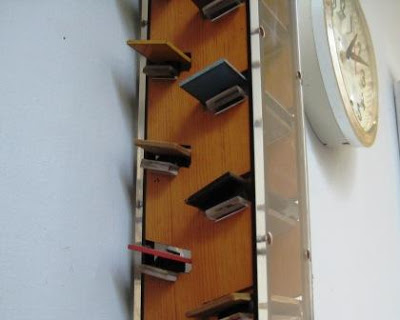 I did try to take a photograph in the shop of one of the items on sale but promptly got told off before I clicked, which I thought was a little over the top but hey, their patch, their rules.

Talking of shop, I’m a sucker for a bit of exhibition merchandise.  And I loved this t-shirt showing their stacking chairs. 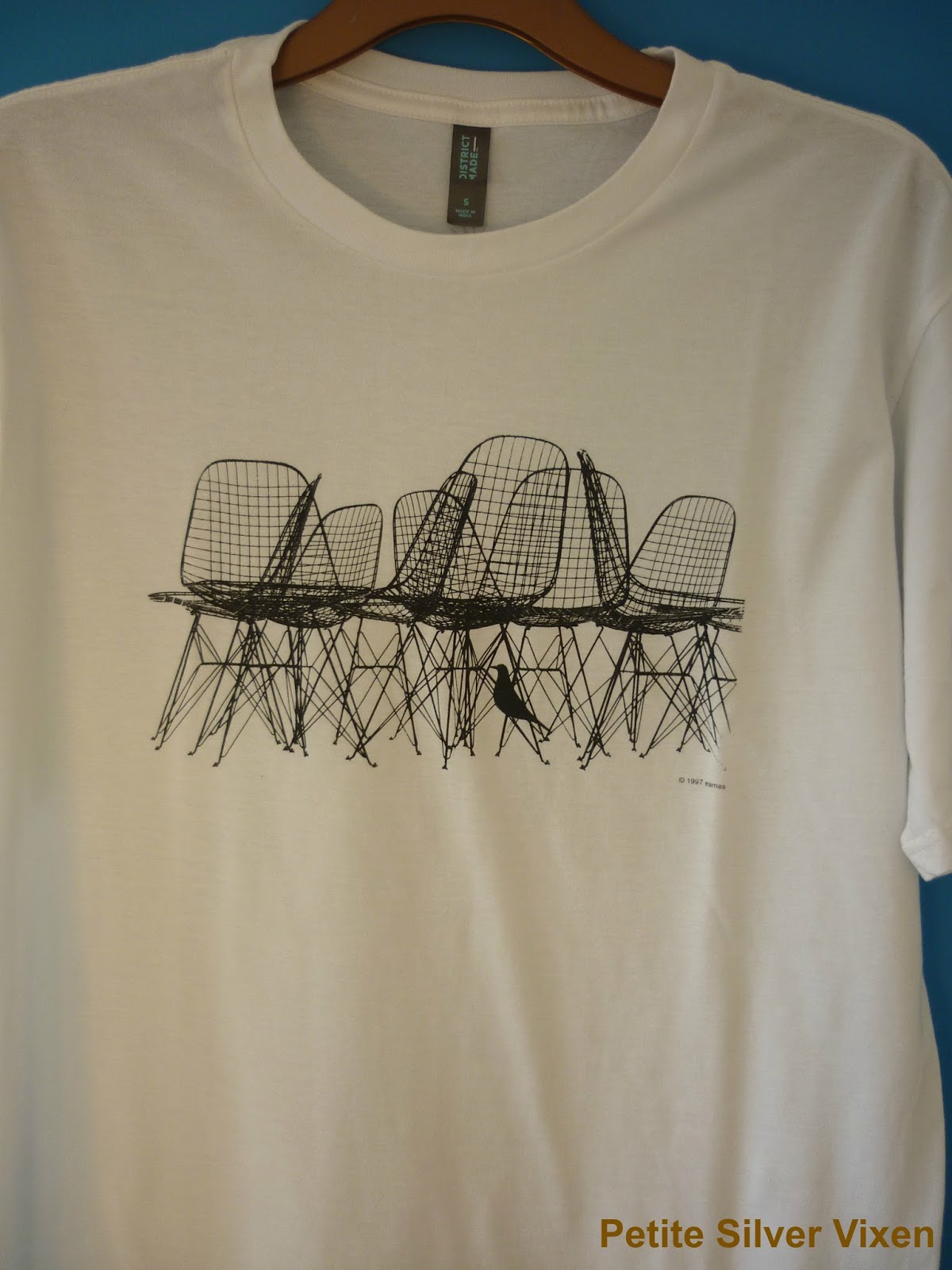 So much so, that I darn well went and bought one.  Excuse the terrible photo, I put it on to take a very quick photo on the morning after we’d gone to the exhibition, in between me finishing my workout on my home Reformer and boiling a pan of peas for lunch.

This is true, I really did have peas for my lunch that Monday – not just peas though.  I’m not into mono-item lunches. 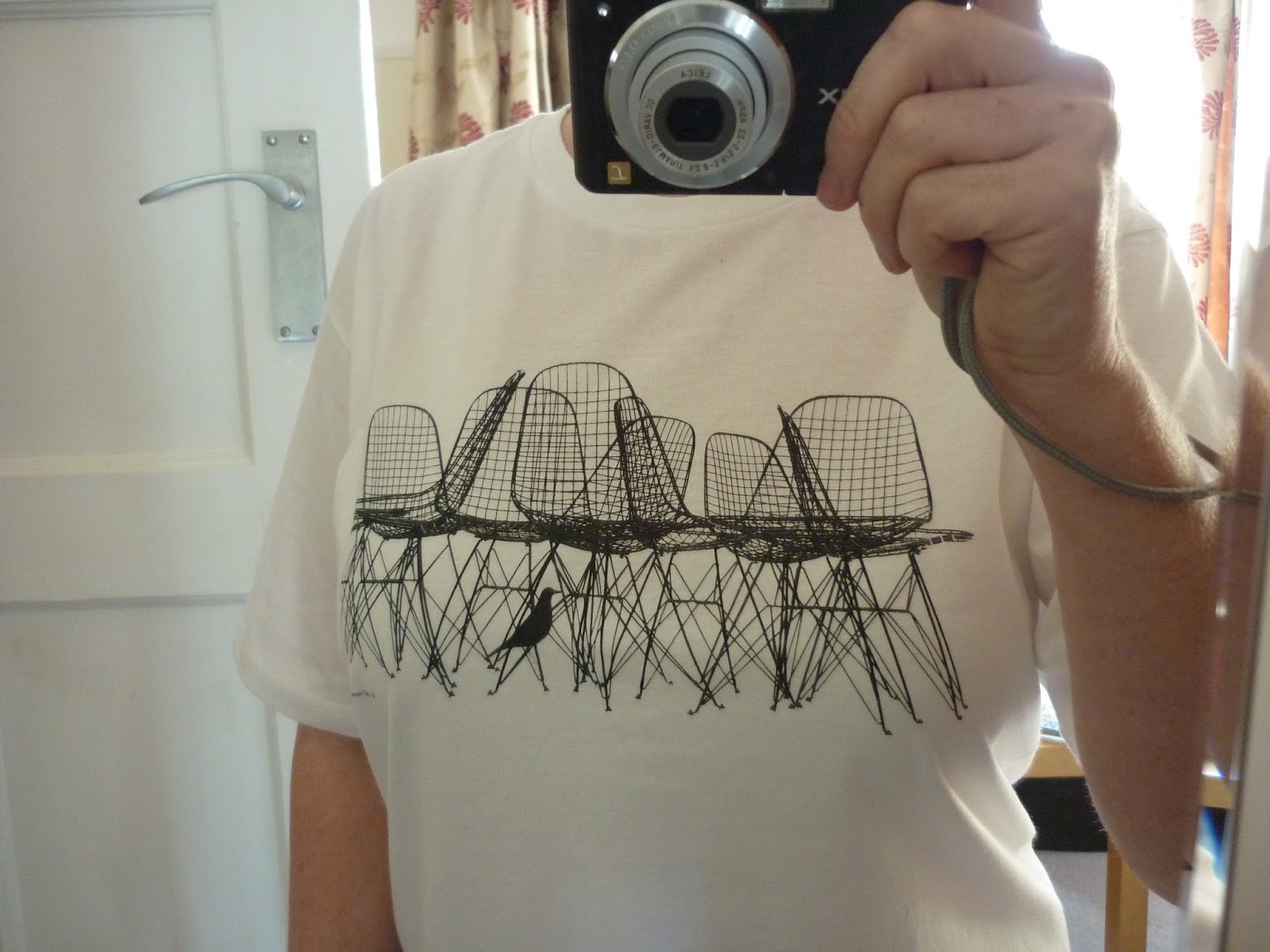 I’ve managed to wean myself off buying postcards at exhibitions because my house could very easily be filled with them but that Sunday, I caved.  I couldn’t resist these three below.

You’ve got to love a couple that don’t take themselves seriously.

Here’s a photo of them pinned by their chair bases, taken outside their workshop in Venice, California. And who needs to buy mass produced Christmas cards, when you can make your own?

This is their Christmas card from 1944.  In the background is one of their sculptures.  I love Ray’s smile.  She manages to look cute, innocent and mischievous all at the same time!

I’m trying to convince Tall Brown Fox to do something similar this year! 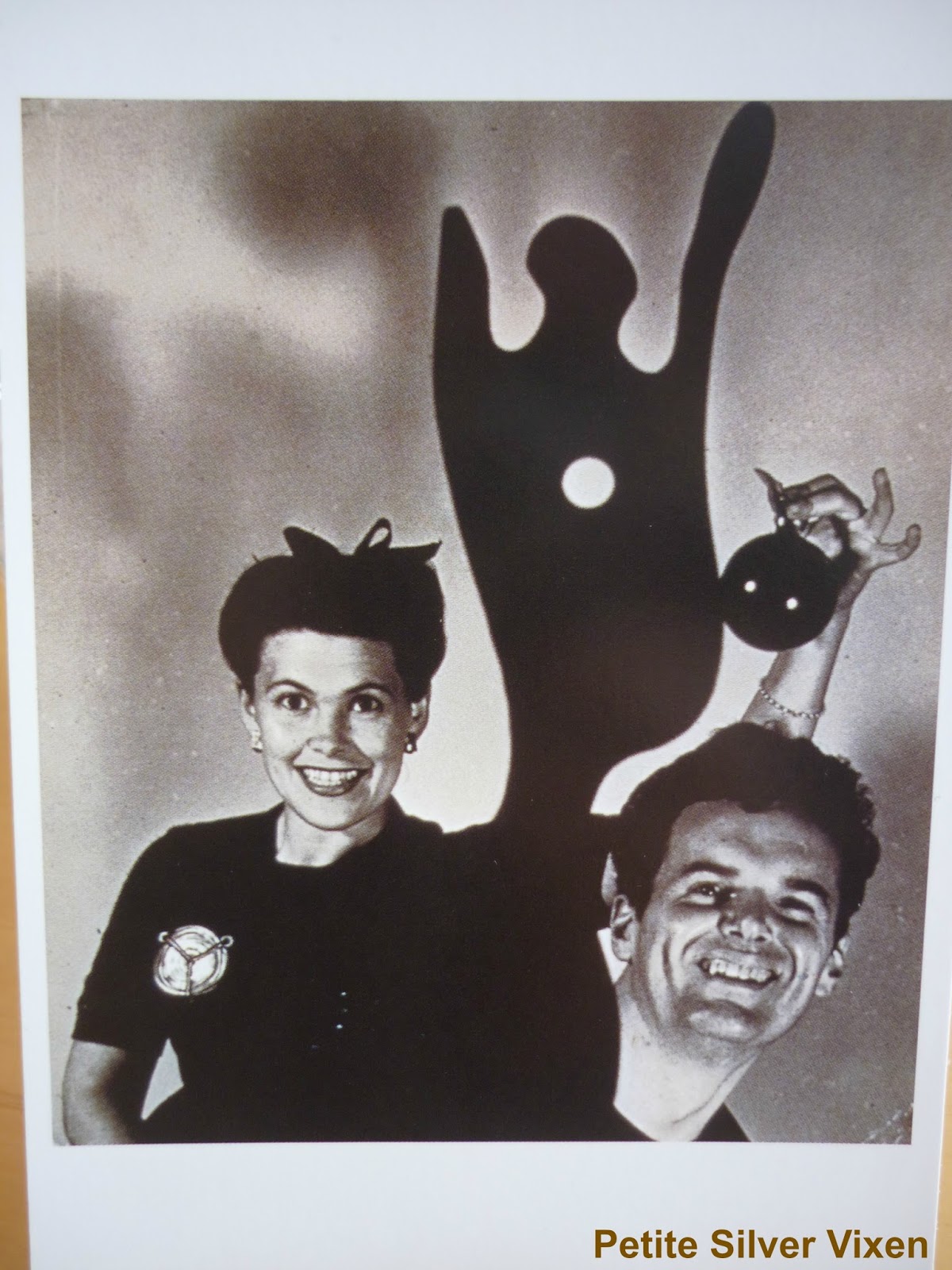 And this was their Christmas Card from 1946.

I mean they both had more imagination in their little finger than I do in the whole of my body. 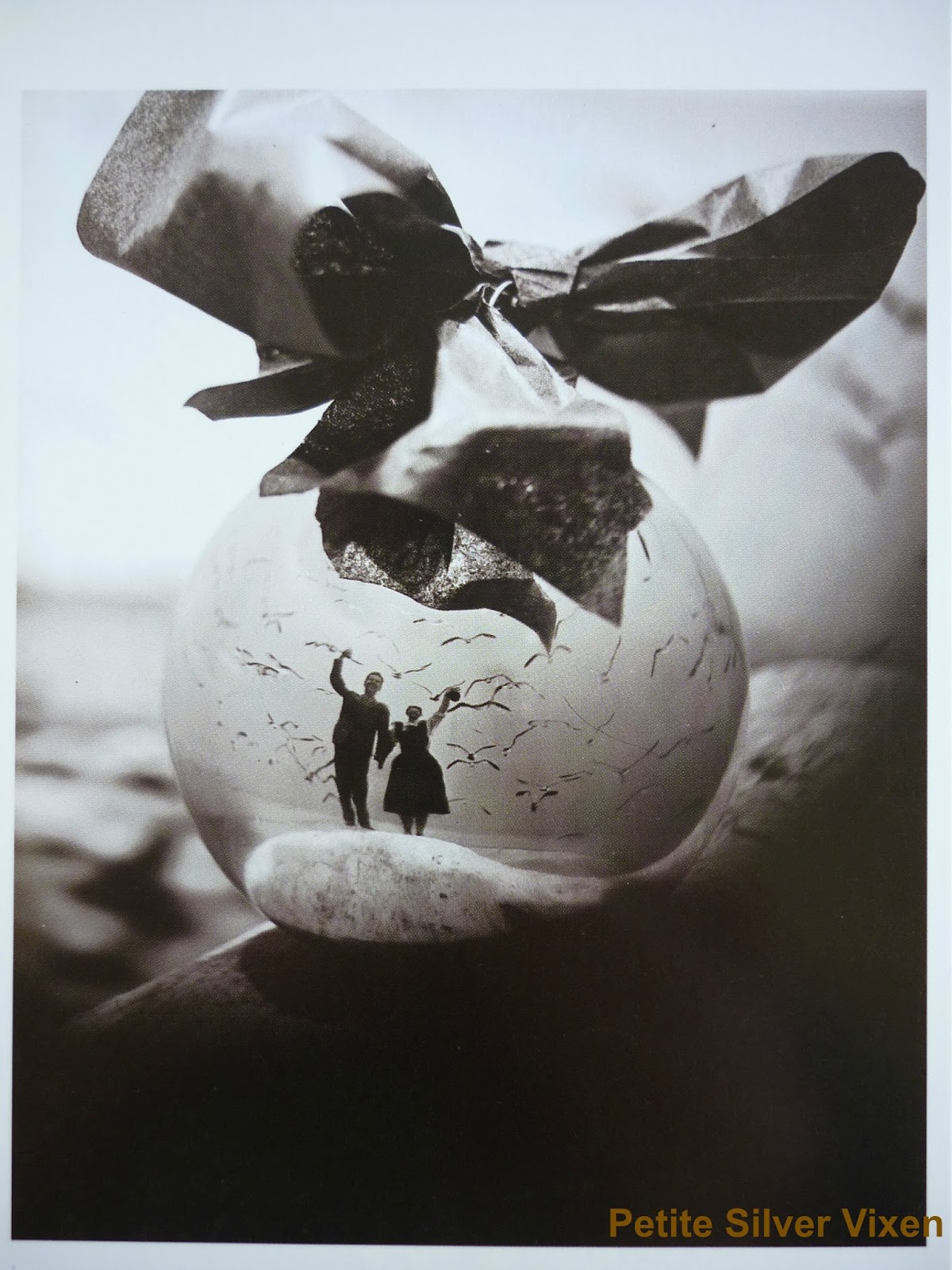 There were many little details that astounded me.  From doddles on envelopes, to the letter Charles wrote to Ray asking him to marry him, with a hand drawn picture of a hand with an arrow pointing to the ring finger.

This is what I love about exhibitions, Stumbling across little nuggets.  For instance, they were great friends with the Labour MP, Tony Benn.

In the exhibition on Benn’s note paper is his hand written limerick to Charles:

So excelled at a myriad schemes

that his rocketing mind

left the world far behind

now in orbit his genius gleams.

If you’re even vaguely interested in design, I couldn’t recommend it enough.  Buy tickets in advance. Why queue on the day to buy?

The World of Charles and Ray Eames exhibition details