Now I do like a spot of leopard print.  In the 7 months or so I’ve been blogging, I’ve worn quite a bit of the good old print.

I may be waaaaay over forty now, in fact this year I’ll be knocking loudly on the door marked 50 (gulp!) but that’s not going to stop me from wearing any kind of footwear I like, so allow me to introduce you to my leopard print style Doc Martens. 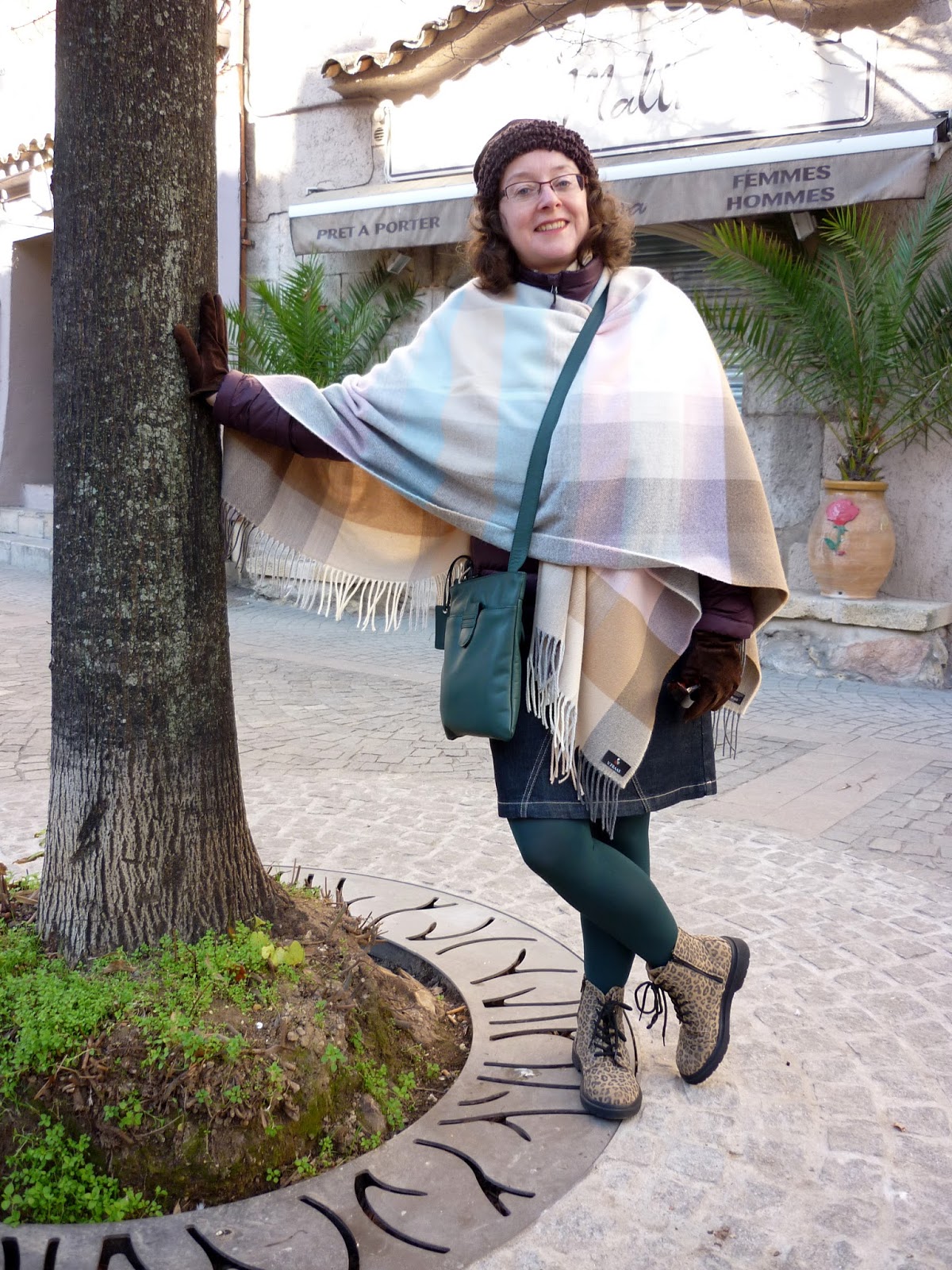 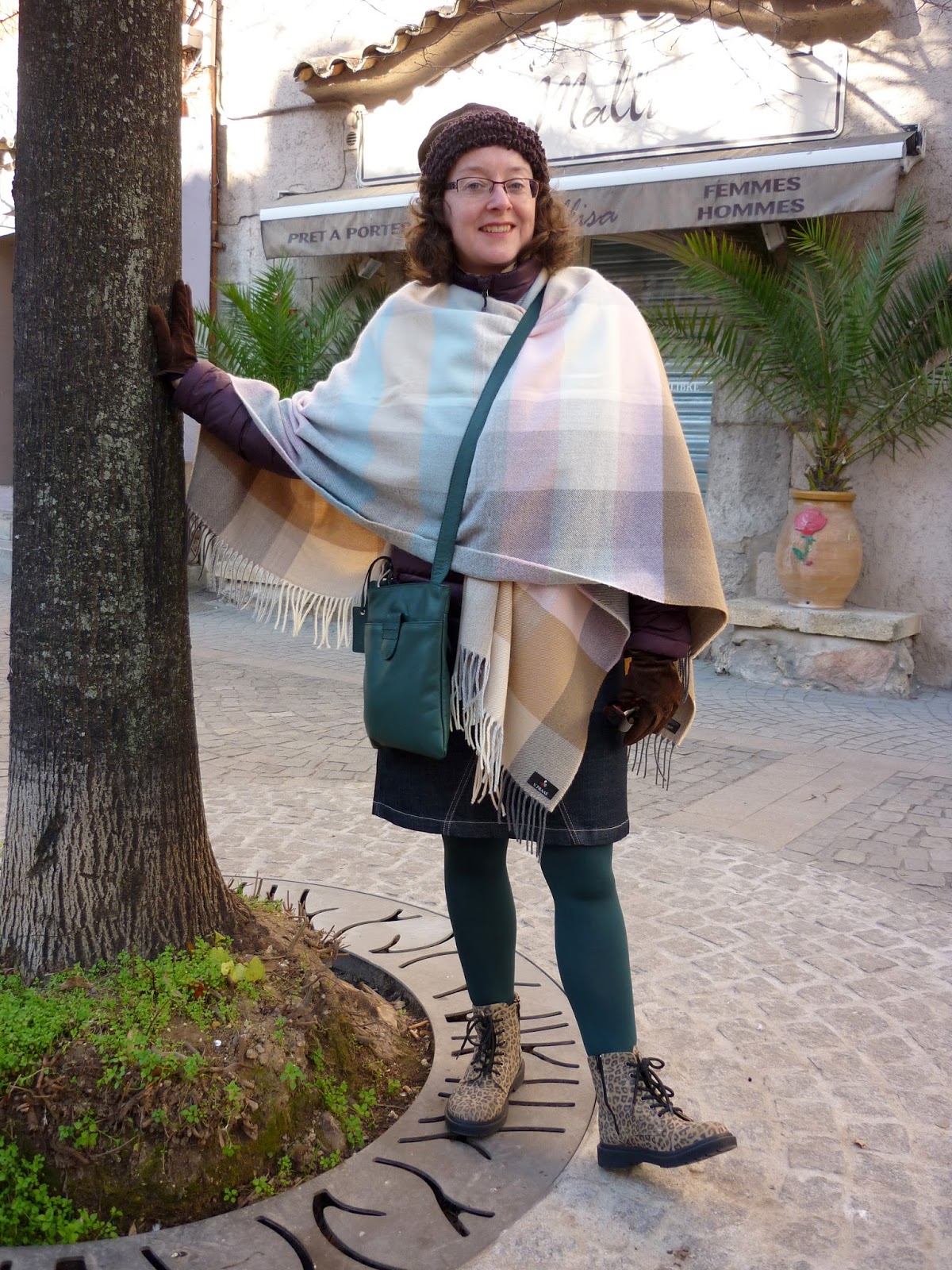 Leopard and denim like to hang out together.  They really are such an easy combination to pair but this time instead of a denim shirt (been there done that!) or jeans (too obvious), I thought I’d go for a denim skirt.  These have been big this winter especially A-line ones with button through.  I did try on one of those but it didn’t look as good as my old faithful.  And I like that this one is a darker denim too than most of the ones on sale.

And wearing the skirt gave me a chance to show off some hunter green tights!  Being the conscientous style blogger I am, I had given careful thought to which tights would make the cut for our Christmas break, which was a decidedly strange experience, not ever having had to give much thought to tights for a trip before.  Suffice to say, these ones made the cut, as I’d already decided I was going to pack my green crossbody handbag.

It was the penultimate day of our stay in France and the weather cried out for us to go for a pleasant stroll around one of the local villages to stretch our legs, before settling on a café terrace, soaking up the sunshine whilst drinking something warm and wonderful like vin chaud (mulled wine) or chocolate chaud.

As the walk was only going to be a gentle ambulation – no running shorts and trainers required – which was a relief as I hadn’t given any thought to the packing of either of those two items into my suitcase. Clearly, I’d used up all thought on tights.

But I had had the foresight to pack my leopard print DMs and they were the ideal choice for said gentle ambulation.

Sturdy yet comfortable, practical yet playful.  Which is kinda what you want in Doc Martens, I feel!

Although it was bright sunshine – cue oversized sunnies – I did need to wear my light down jacket.  In a deep plum colour, it looked perfectly fine with the denim and green but I wanted to lift the outfit up the style scale.

The DMs needed a style partner!
Cue the plaid cape.

Capes/ponchos have also been a big trend this season and are such a simple yet stylish way to jazz up a more functional coat. My plaid cape is definitely earning it’s keep since I bought it back in the Autumn.  A wise last minute addition to the suitcase! Turns out, I’m ahead of the trends as my pastel cape contains Pantone’s Colours of the Year; rose quartz and serenity!  Er, that’s pink and blue, in plain English.

And just to show I do wear headwear other than berets – although admittedly, it’s a rare sighting, rather like a bamboo lemur – here I am sporting a wee crochet trim, beanie hat.  You can just make out the sparkly bits in the trim. 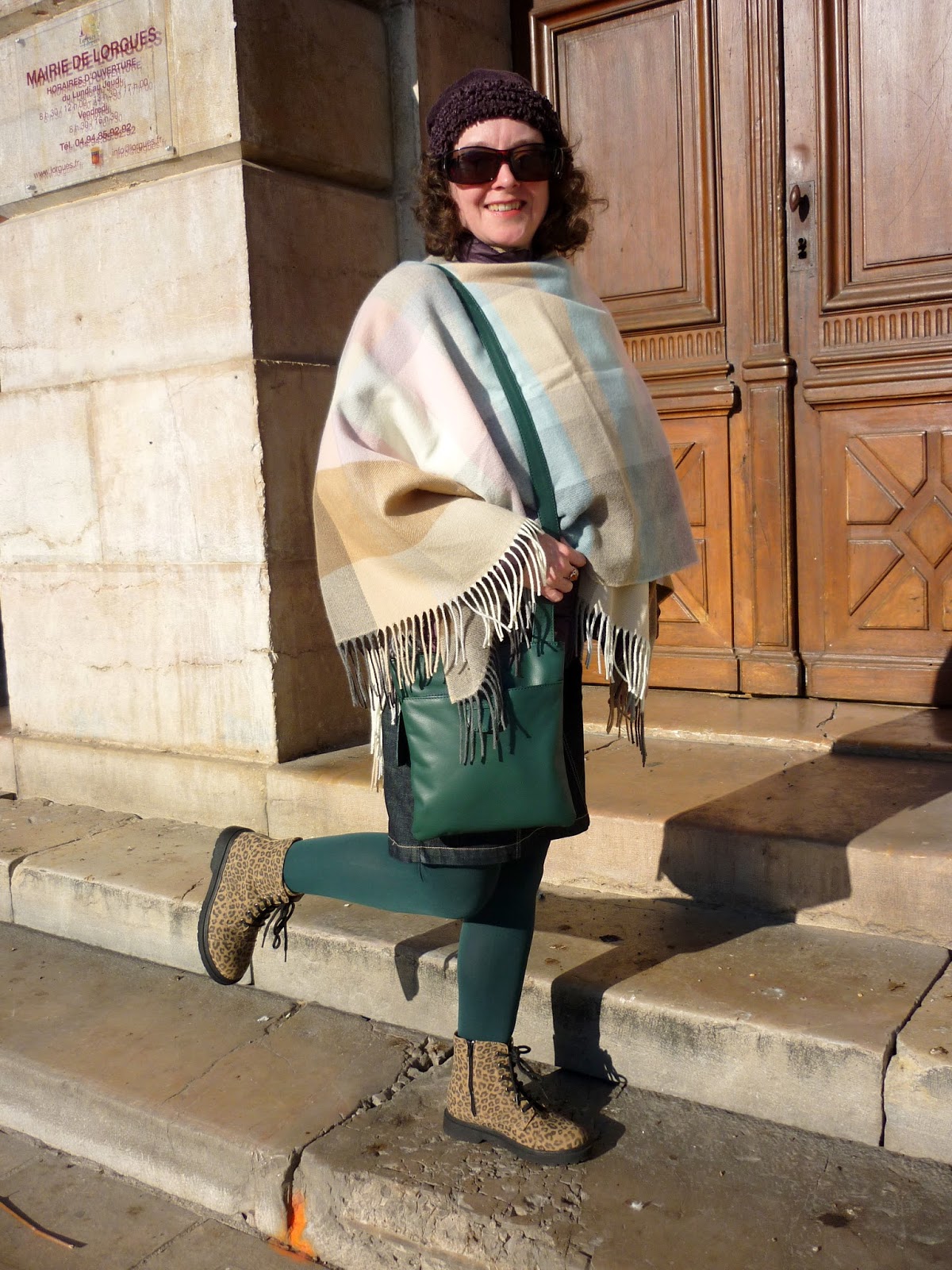 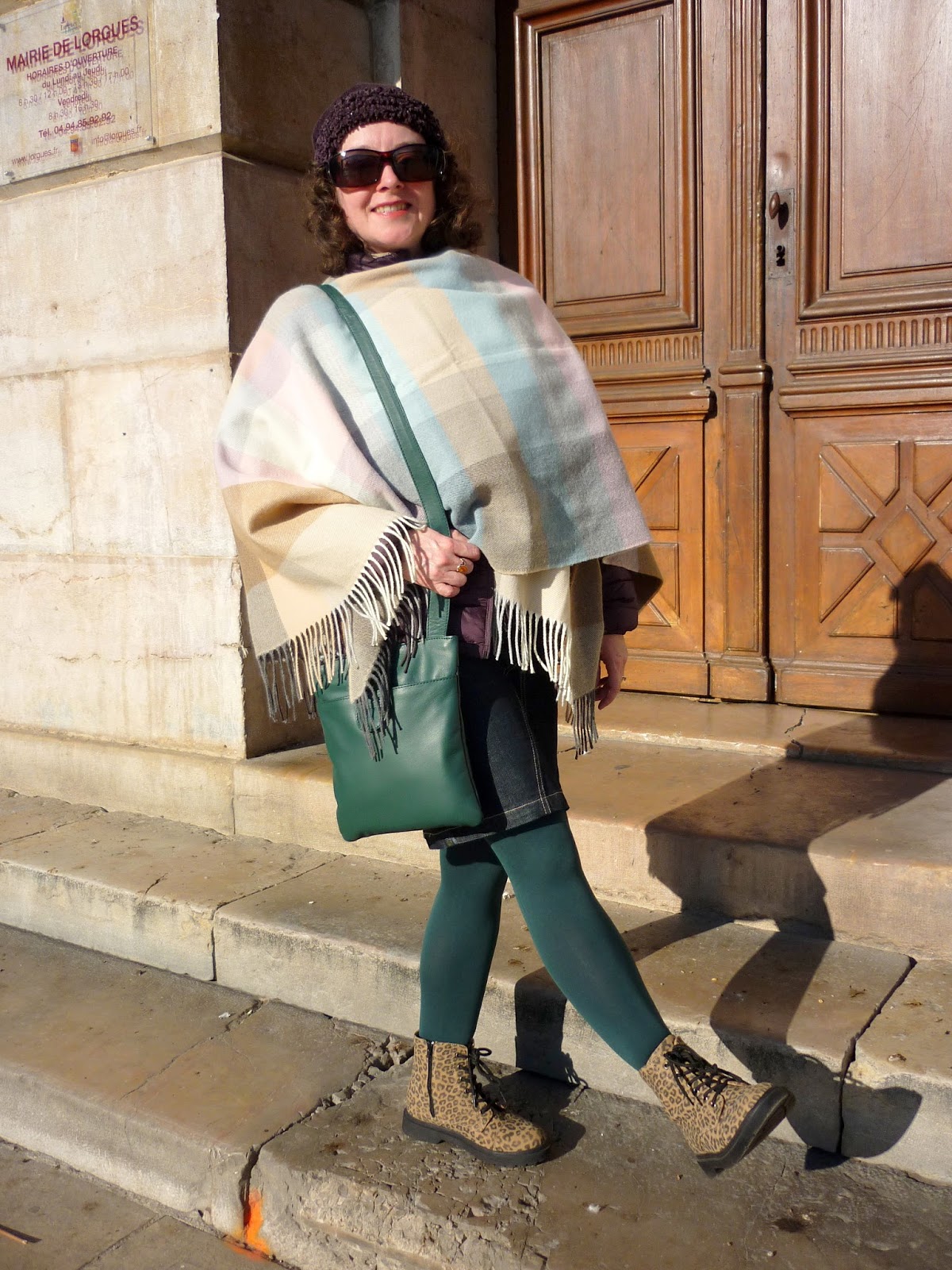 Then something very strange began to happen to my feet.  I had to take off my oversized sunnies to take a closer look at exactly was happening … 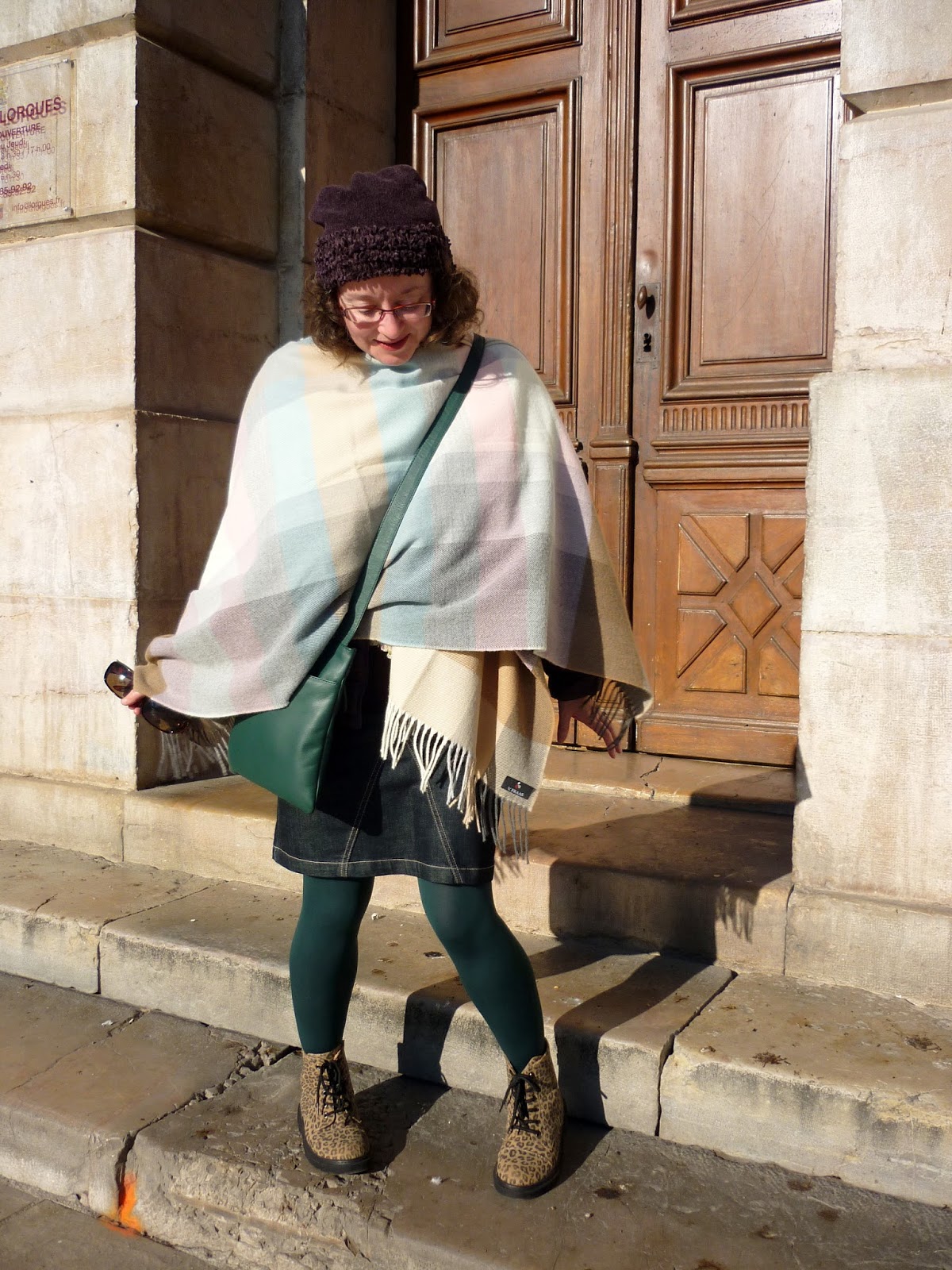 Don’t blame it on the sunshine 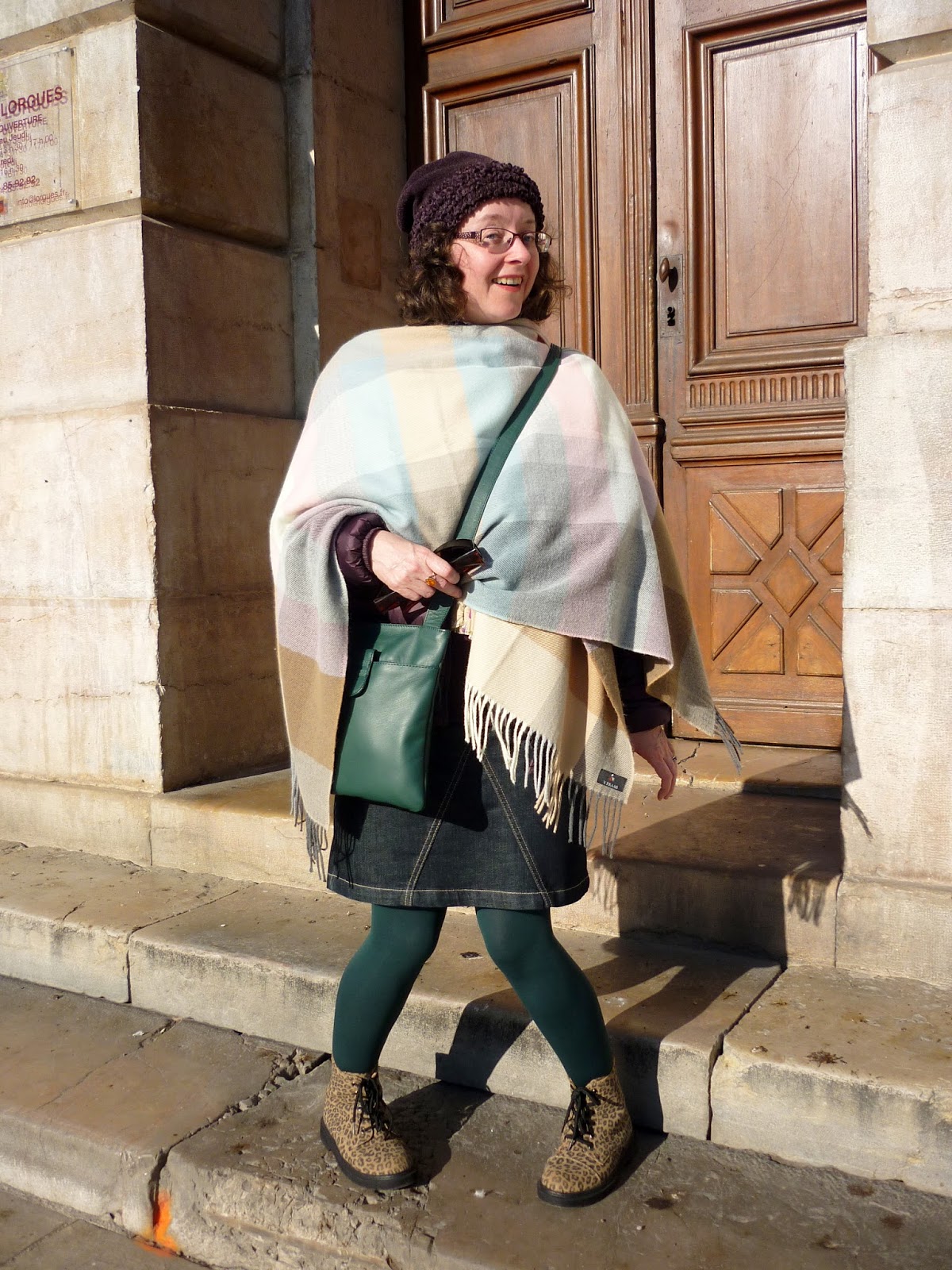 Don’t blame it on the moonlight 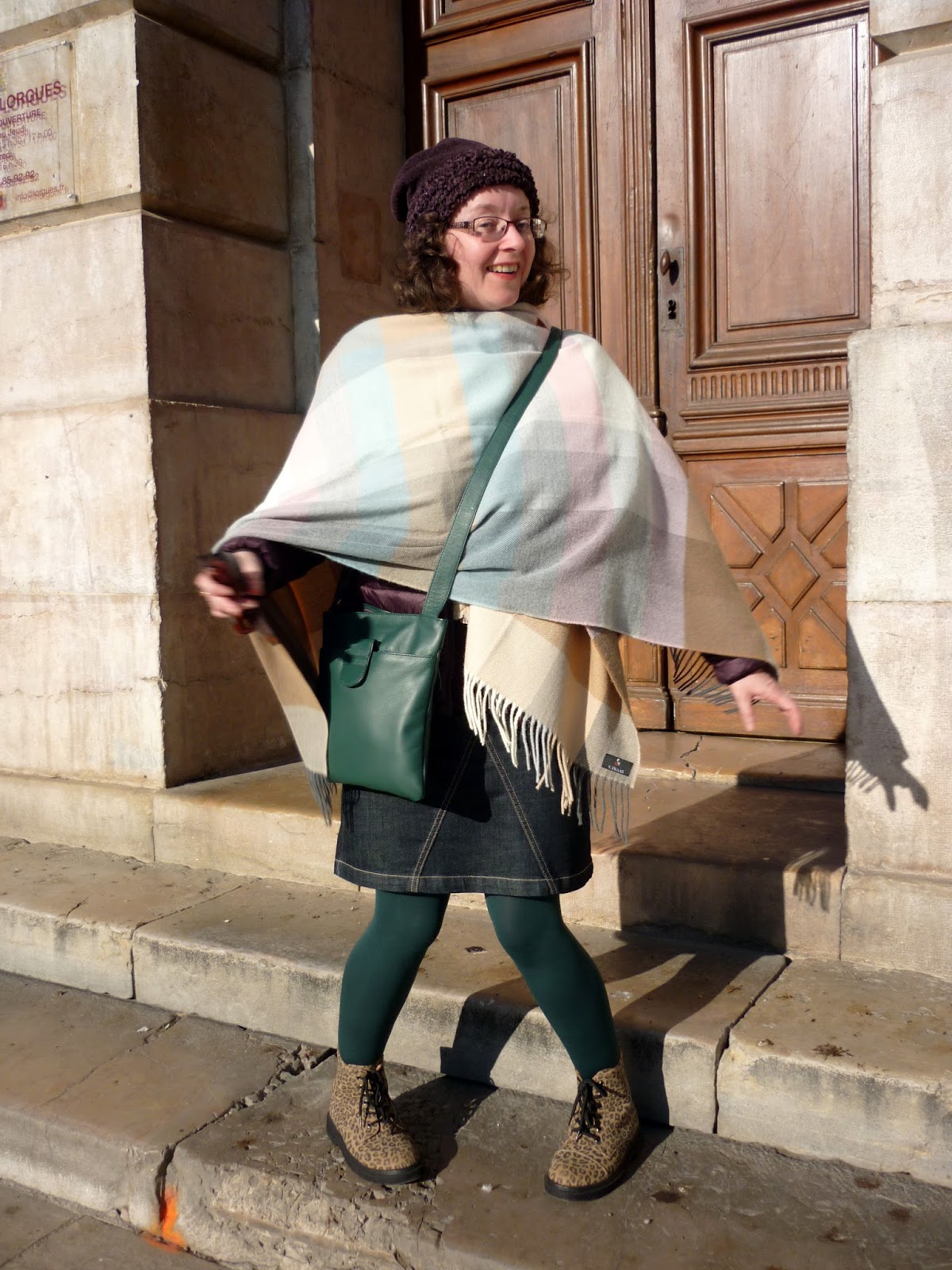 Don’t blame it on the good times 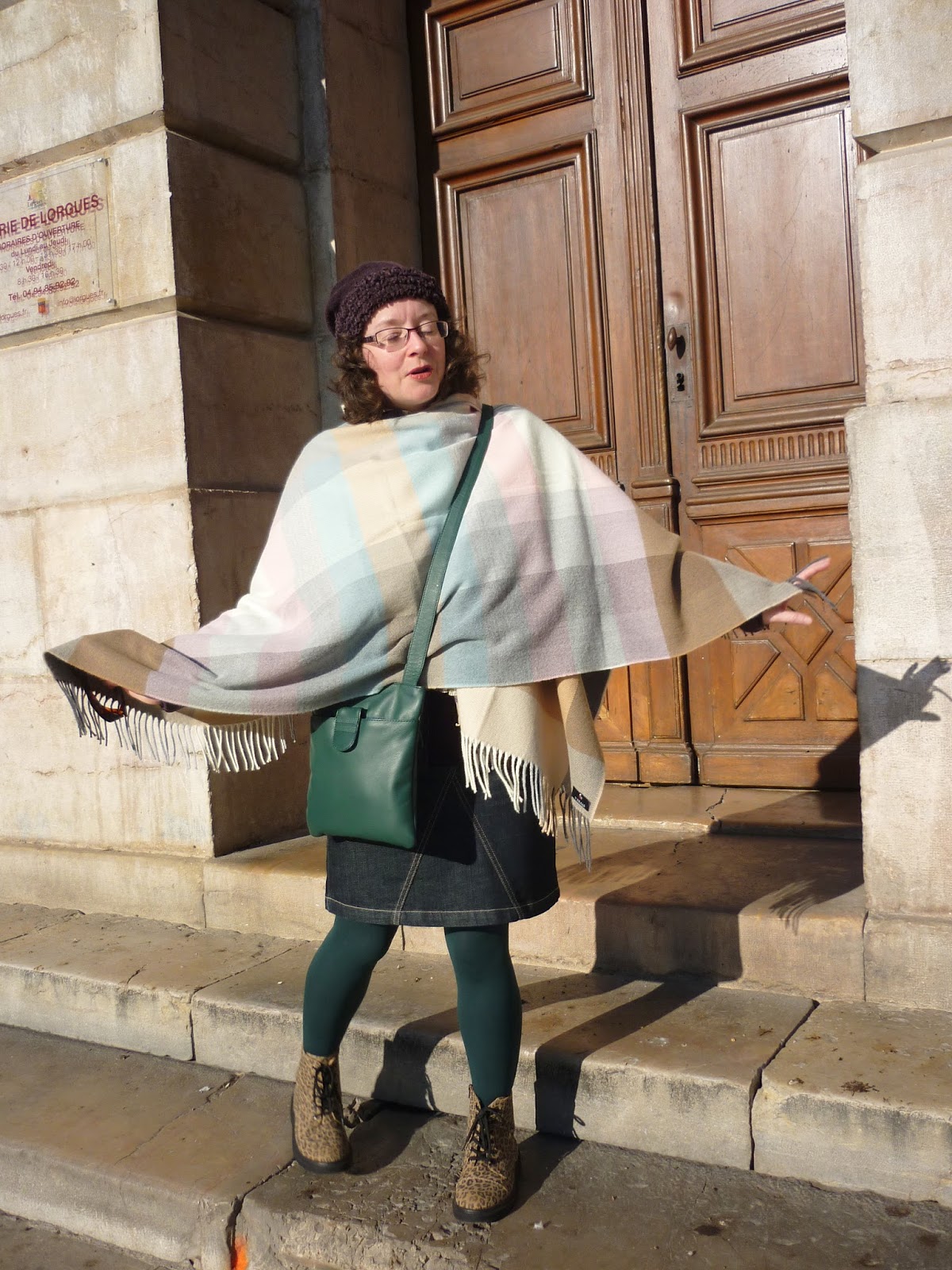 Blame it on boogie! 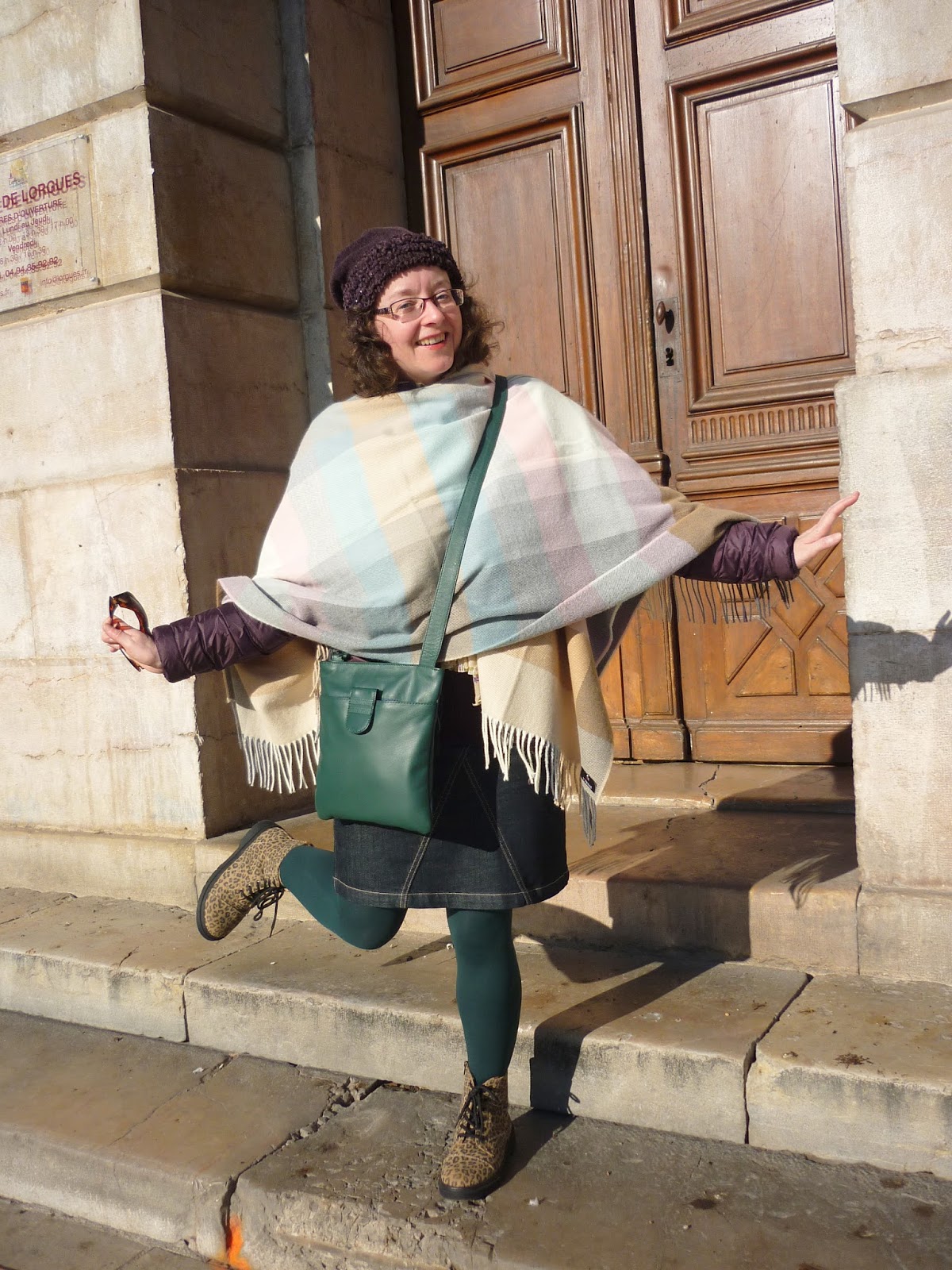 I tried to restore some order and rein in the Doc Martins but when another set of steps appeared, the mood suddenly changed from frivolity to anguished longing.

Not for nothing did I spend hard earned money at the Greta Garbo School of Acting.

How to pose on stone staircases was one of the modules on the course. 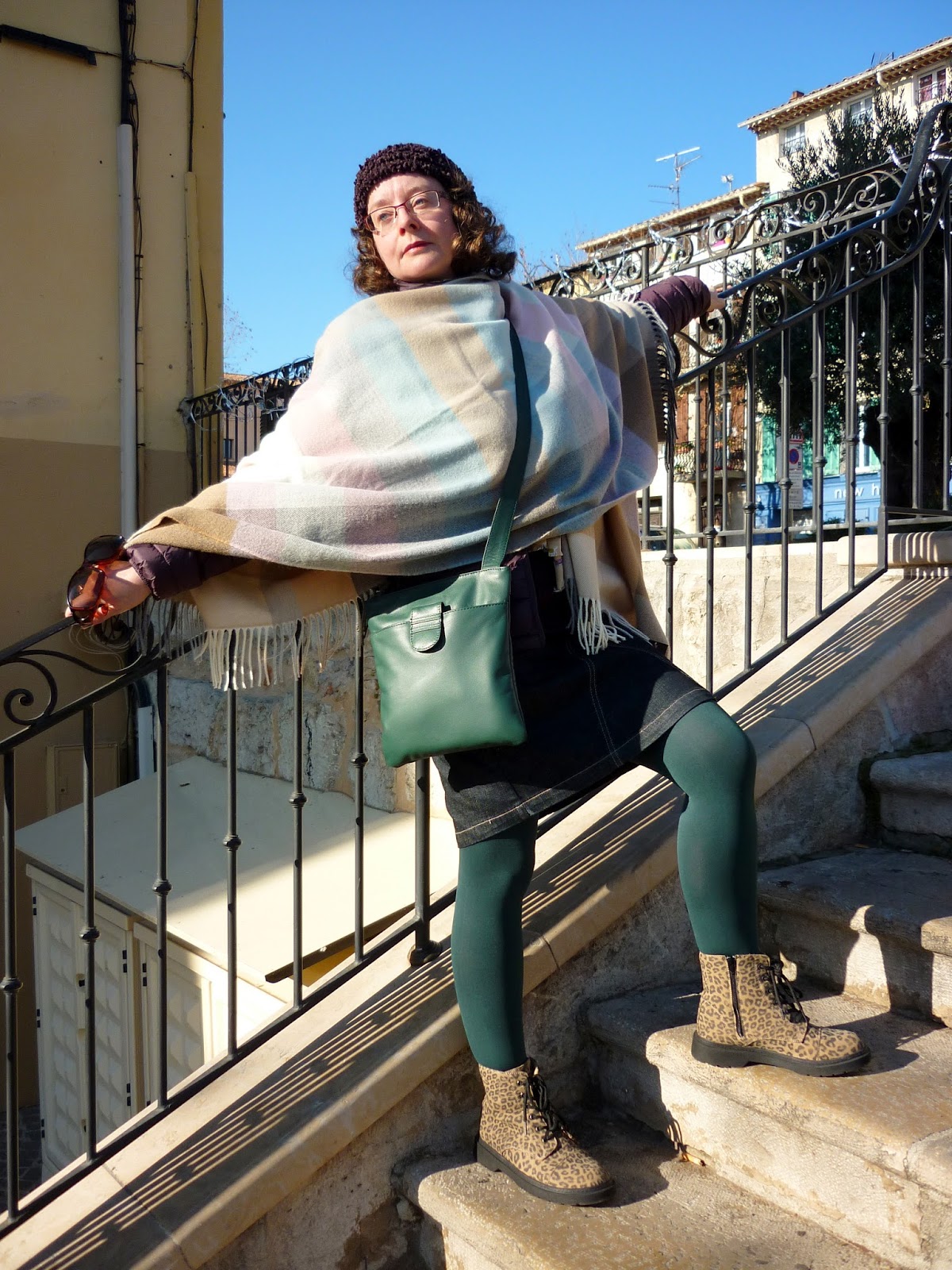 Back at base, after a good stomp through the cobbled streets of the village, the leopard print Doc Martens felt very pleased with themselves and took their place on yet another set of steps – what the heck is it with these boots that they gravitate to steps????? – to pose for one last shot in the rays of the afternoon sun.

And quite frankly, I don’t blame them! 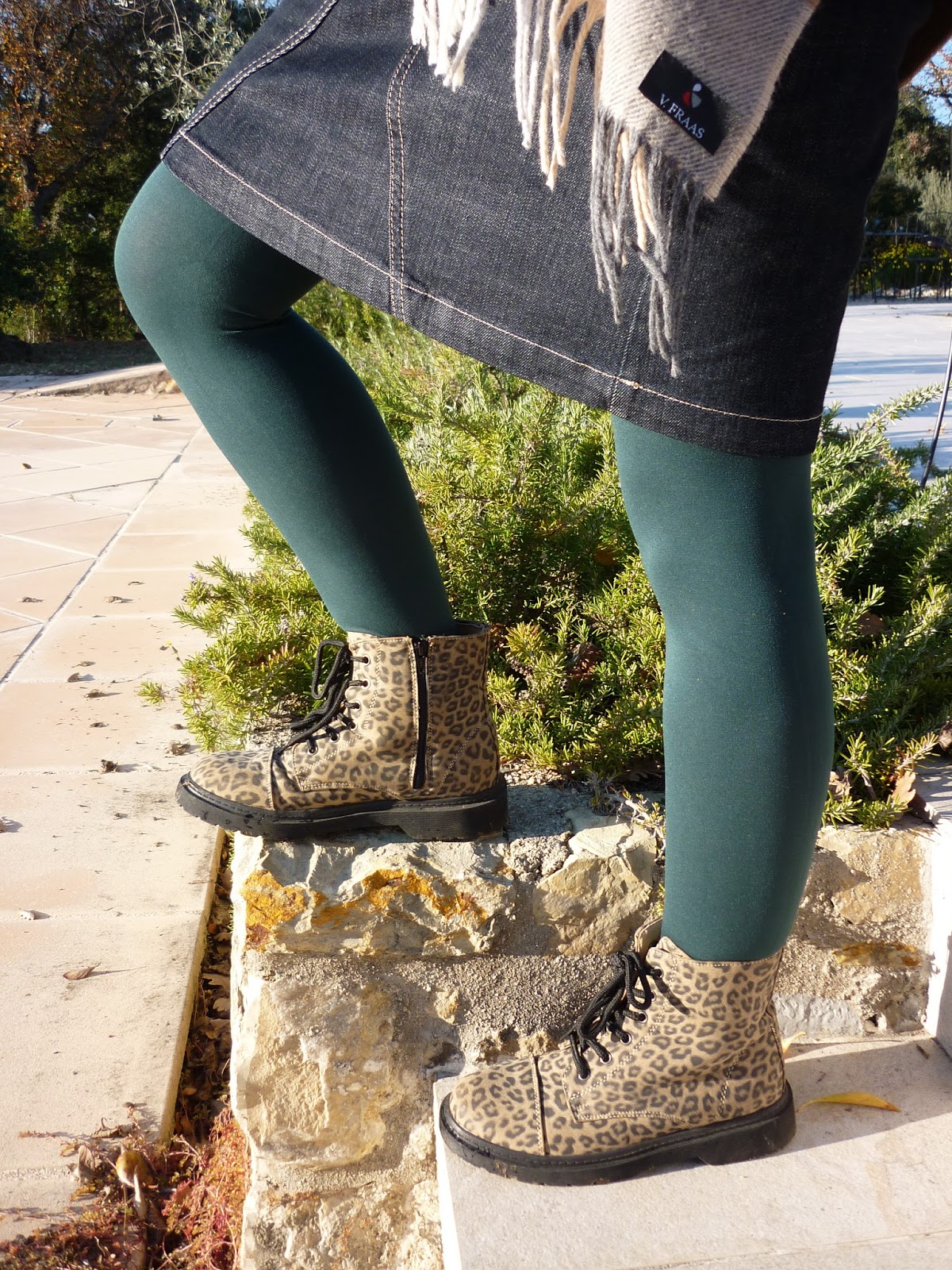 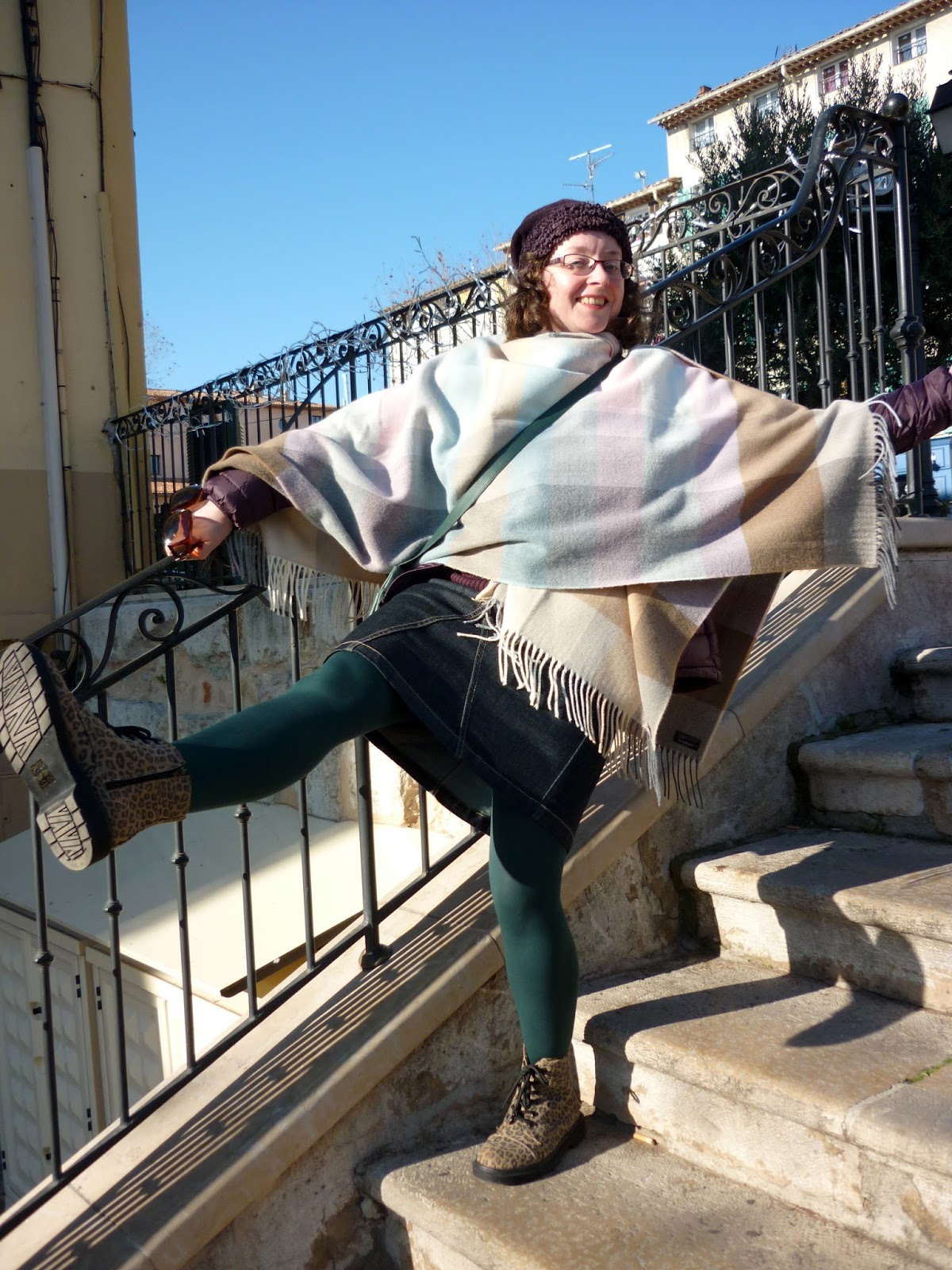 The moral of the story is, if you feel like wearing Doc Martens or any other more unusual footwear, go for it, whatever age you are! Clothing and footwear don’t come with age tags.

If you feel like larking about on several stone staircases, do it with aplomb!  Life is too short to worry about what people will be thinking of you.