With living so close to the capital city you’ve a plethora of cultural delights to enjoy.  And this year, Tall Brown Fox and I are determined to make the most of what is on our doorstep.

A client of mine mentioned that they’d seen a newsclip on TV about a new exhibition opening entitled Hilma af Klint; Painting the Unseen.  Hilma was an extraordinary female artist, who painted large, bold, colourful abstract paintings. My interest was immediately piqued! 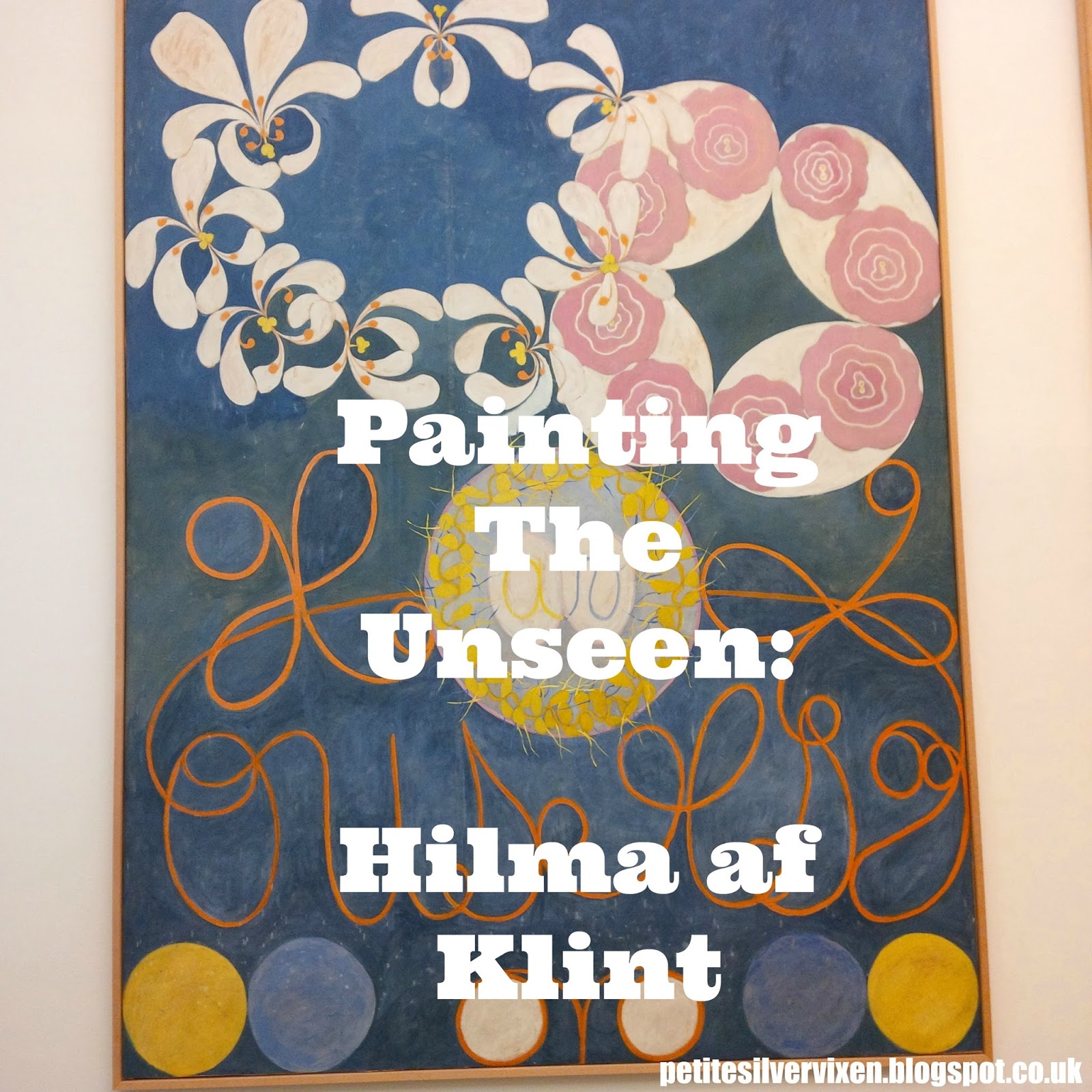 Back in early March, on a fiercely wintry Sunday afternoon we decided to pay a visit.  With a light lunch to fortify us, I couldn’t resist a glass of Prosecco; because I find a glass of fizz is the perfect start to an afternoon of art viewing! But just the one mind; it’s not the done thing to lurch in an intoxicated stupor into the art work!  You can read my post from last month on what I wore to the exhibition in my Styling a Leather Skirt post. 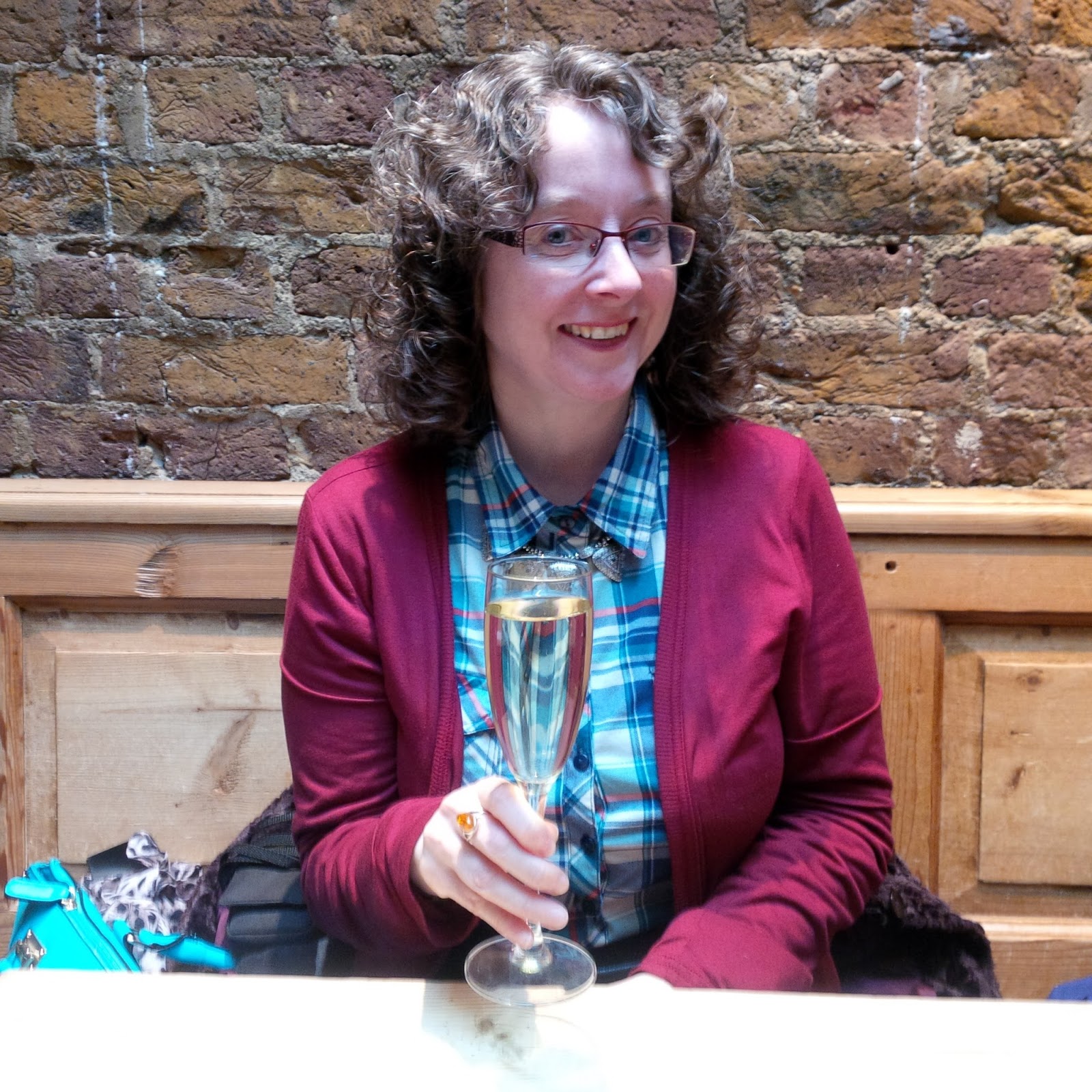 From the post, you’ll know that as we were taking outfit photos outside the gallery, it started to rain which within a blink of an eye had turned to hail.  You forget how hard hail is until it’s hurtling down upon you a break neck, earth shattering speed, with enough force to crack open a coconut!

You can just make out the hail in the photo.

It was my first time to the Serpentine Gallery; a fairly small gallery situated in one of London’s great parks – Hyde Park. 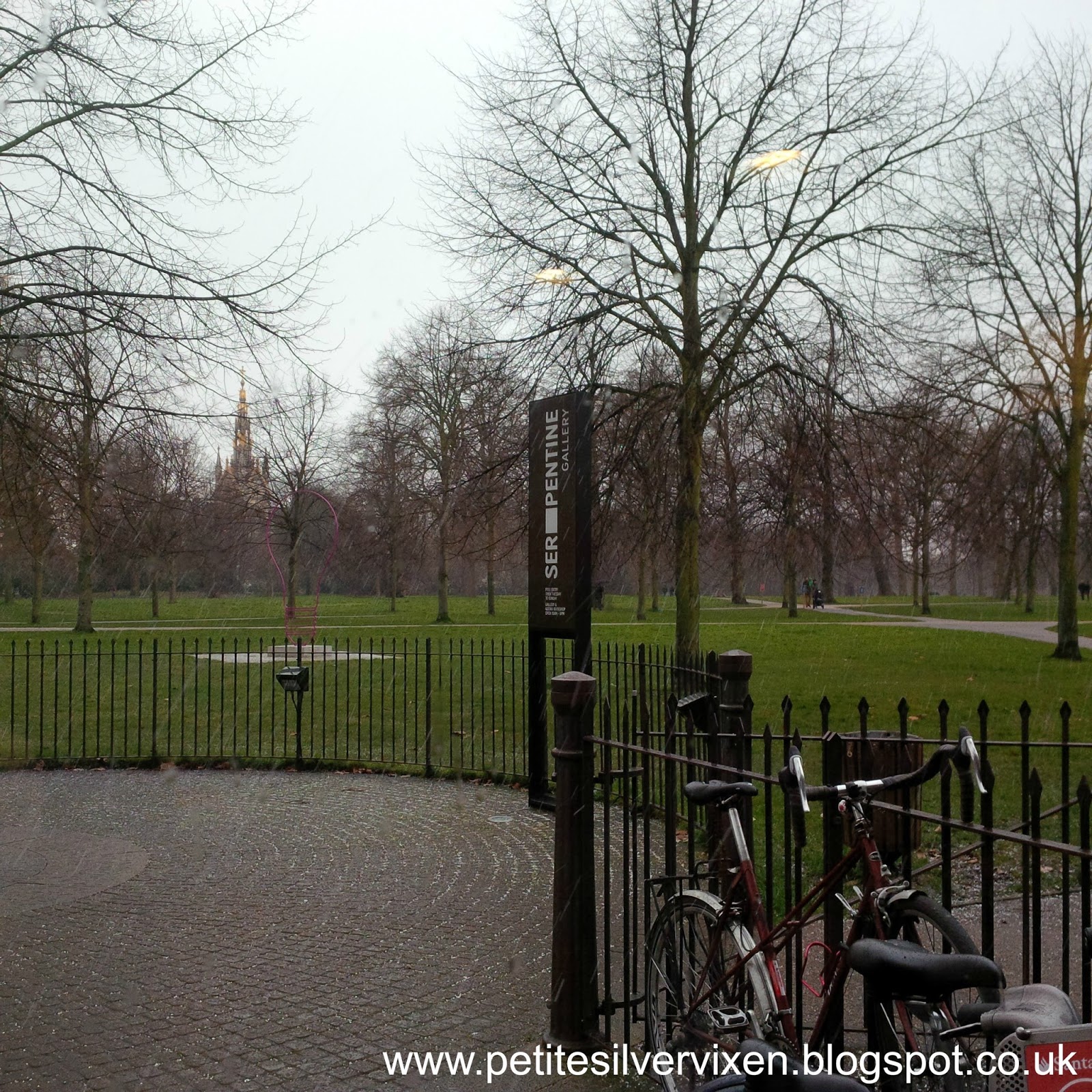 Hilma af Klint was the daughter of a Swedish admiral, born in 1862.  It was fortunate for her that Swedish society at the time allowed women to study art, enabling her to train at the Royal Academy of Fine Arts in Stockholm.

I had never heard of this artist before and it’s not surprising in some ways.  She died in 1944 and she was very clear that she didn’t want her work to be publicly exhibited until 20 years after her death, as she felt people wouldn’t understand her work, until sufficient time had passed.

This was mainly because she was far from being a conventional painter.  She was drawn to the inner workings of nature, the natural sciences, automatism (avoiding conscious intention in creating art), the spiritualism and the occult. These interests and subject matters could have been quite shocking and controversial for a woman to be exploring, creating and painting in the Victorian and Edwardian era; a time when women were far from being politically, socially and economically emancipated.

In many ways she was ahead of her time and her early work pre-dates the work of artists we consider to be the pioneers of the abstract such as Kandisnky and Mondrian.

Here’s an excerpt from the Gallery’s website that gives an insight into her background and the ideas behind the exhibition.

In 1905, af Klint received a ‘commission’ from an entity, which the group named Amaliel, to create her most important body of work, The Paintings for the Temple. Consisting of 193 predominately abstract paintings in various series and subgroups, the artist painted a path towards a harmony between the spiritual and material worlds; good and evil; man and woman; religion and science. This major work charted the influence of science and religion on af Klint’s works, from the discovery of electromagnetic waves to the spiritual teachings of anthroposophist Rudolf Steiner. Steiner was af Klint’s mentor and his presence in her life resulted in the cycle becoming more orderly with depictions of symbols and motifs, such as shells, snakes, lilies and crosses, from his spiritual movement.

The first series of paintings in the exhibition, that literally hit your eye due to their size and striking use of colour, are her Altar Pieces. 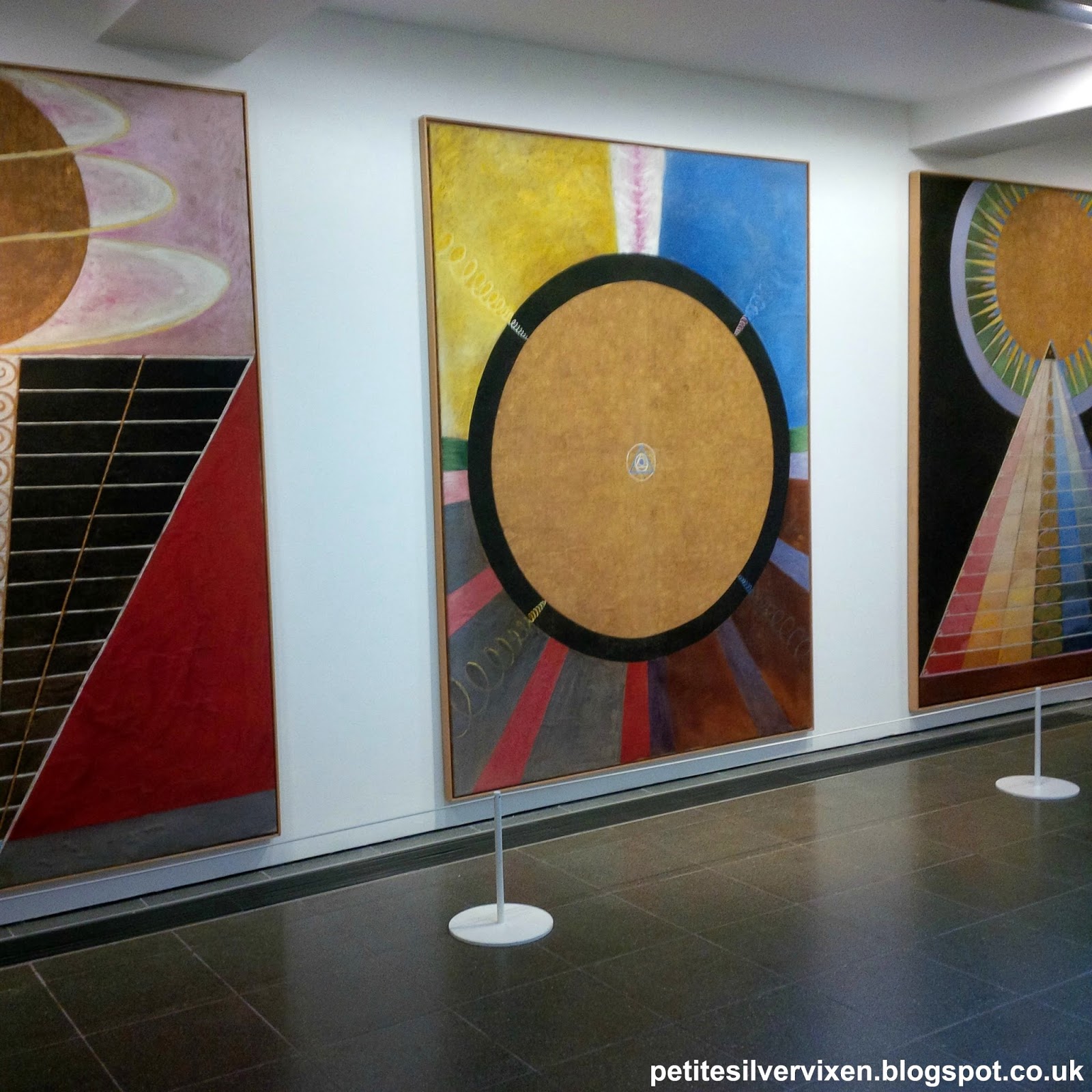 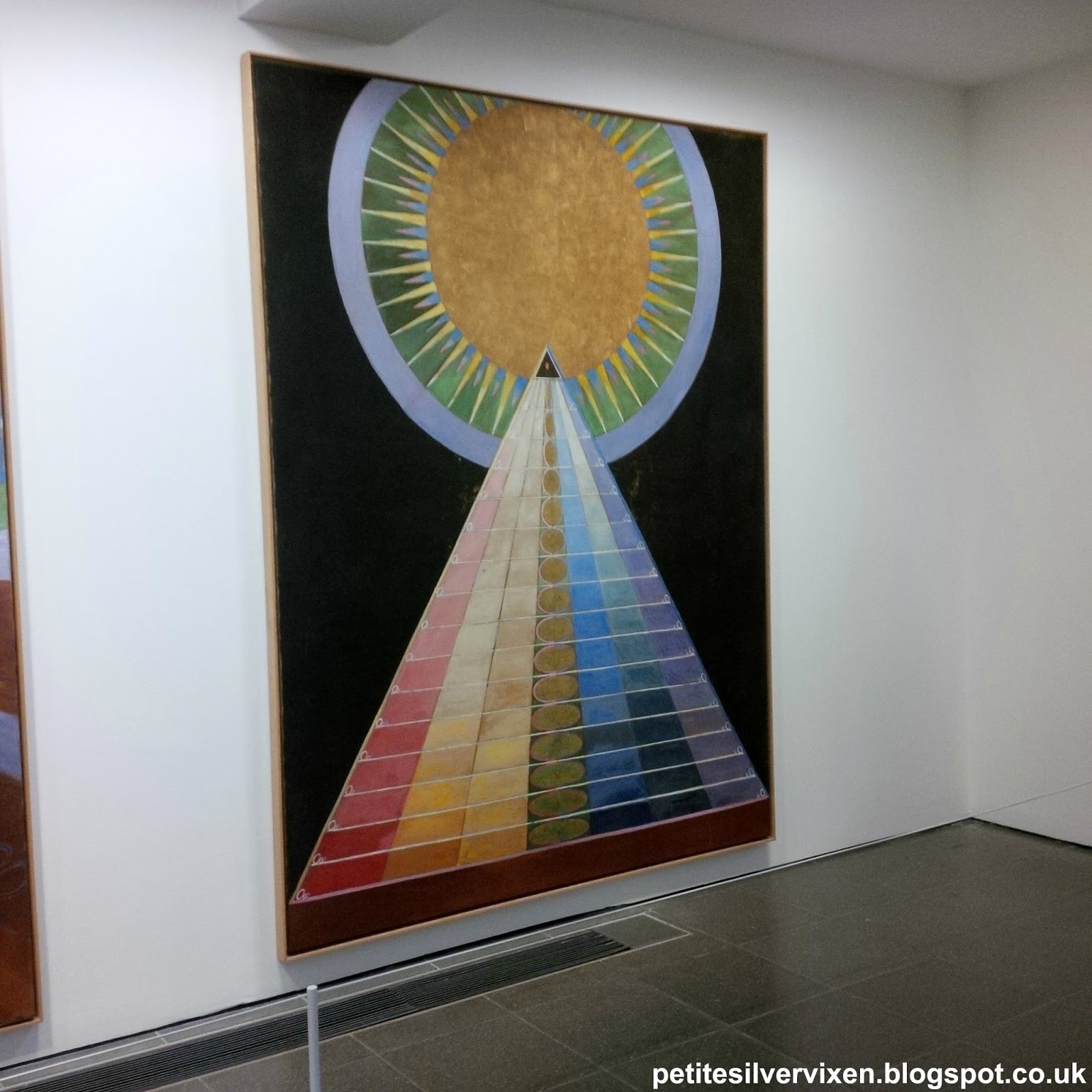 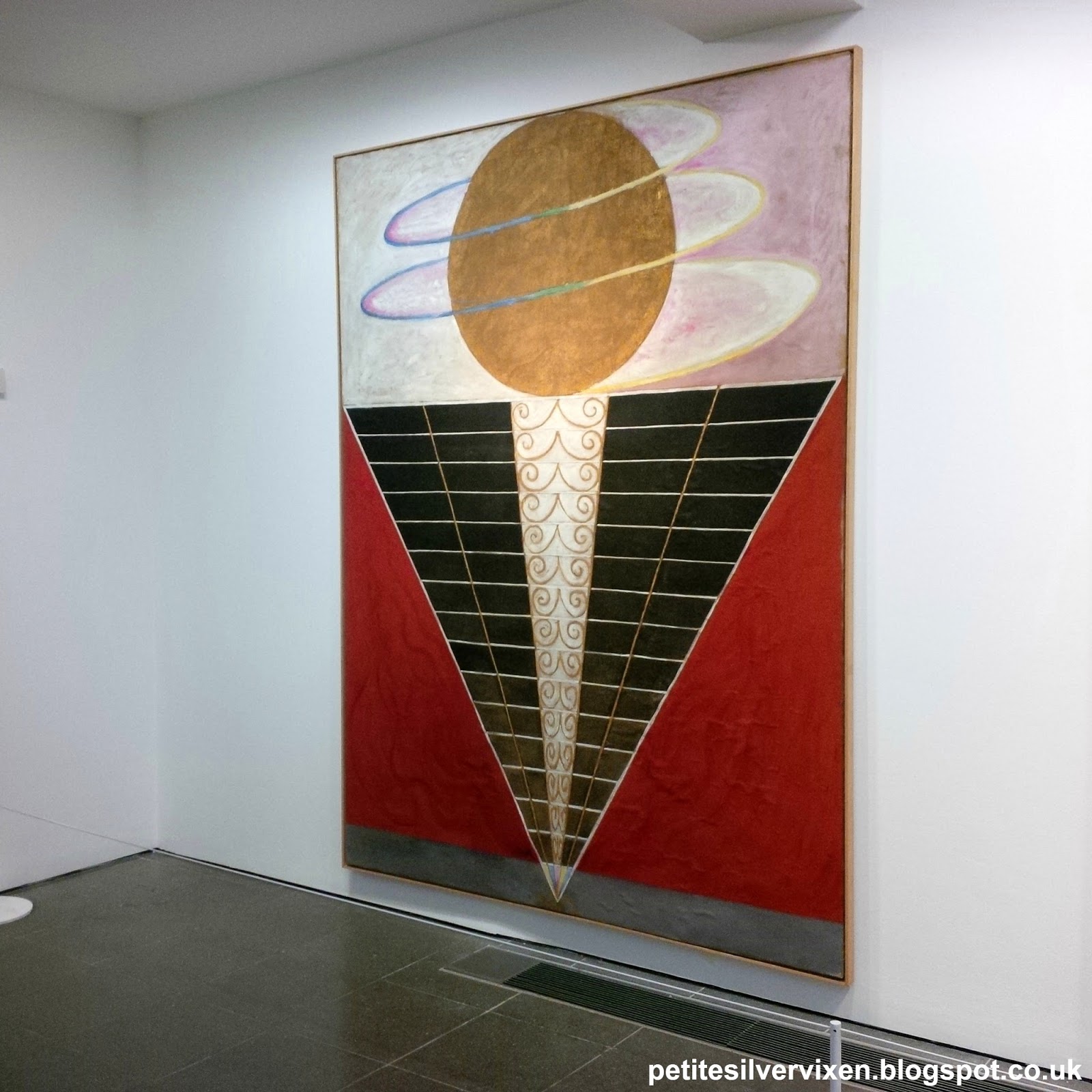 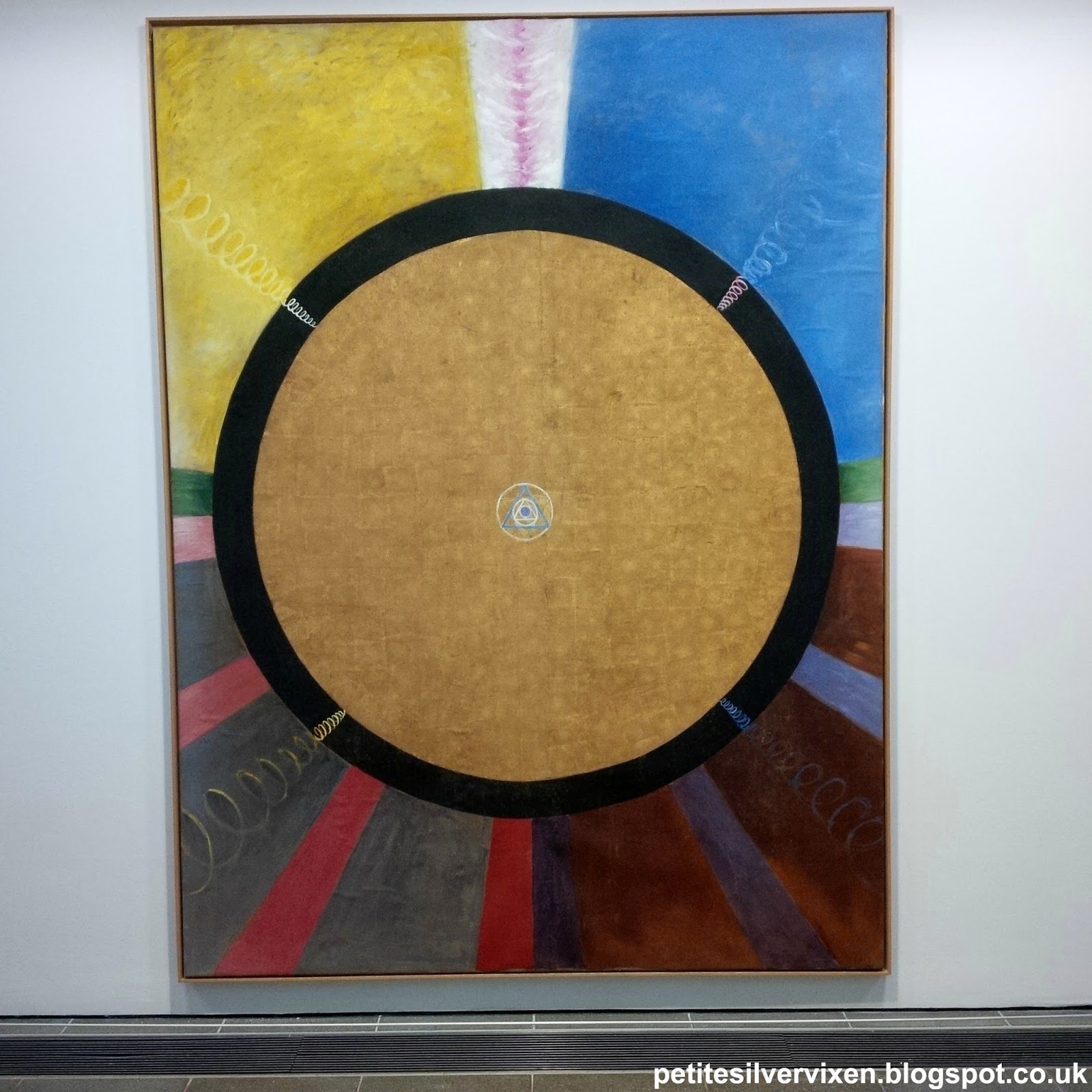 I was particularly drawn to the painting below because I’m fascinated by curves, waves, circles and structures. 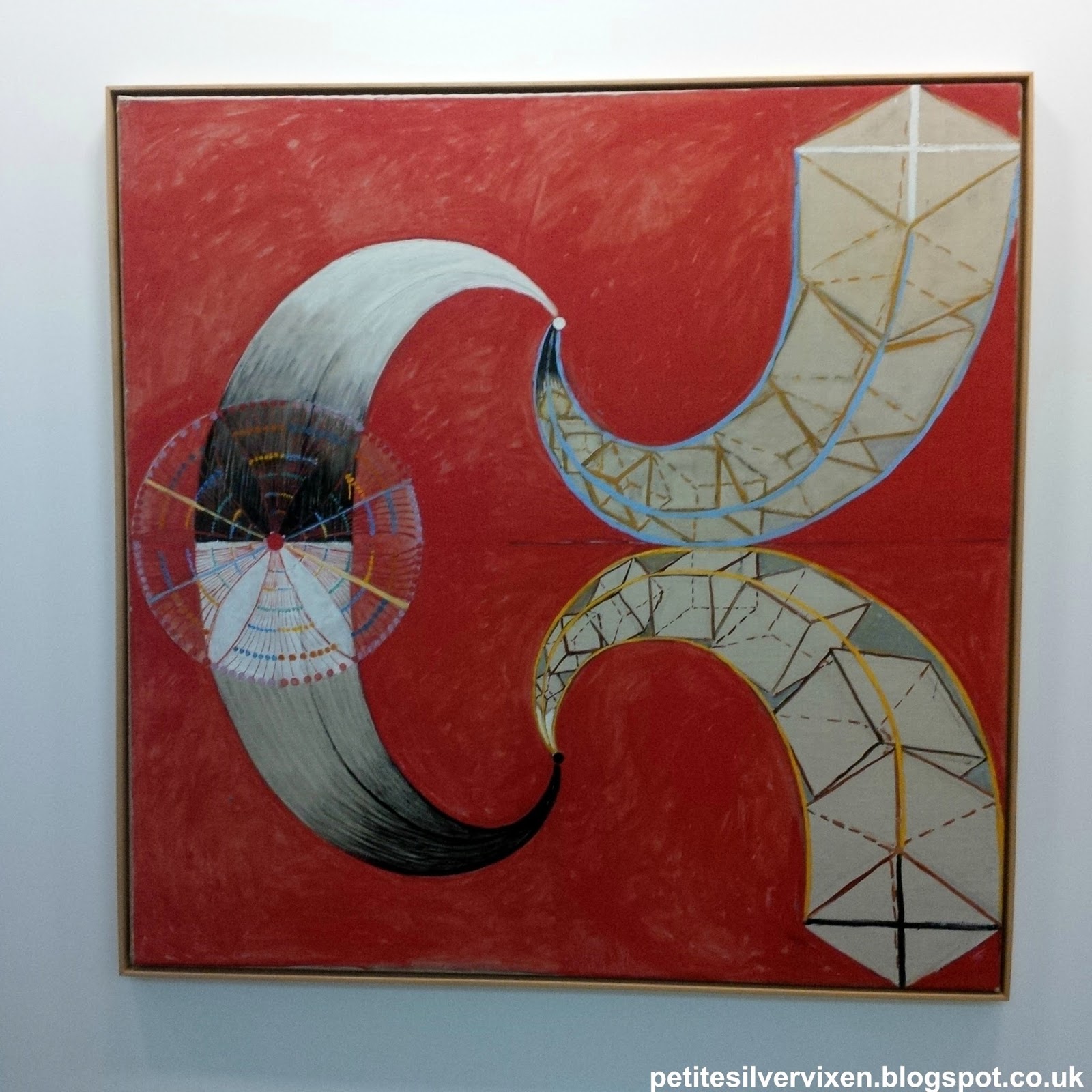 This is a close up of part of a painting that is untitled.  If you didn’t know that this was painted at the beginning of the last century, you’d think it was fairly modern.

I love the unusual combinations of colour and the clear delineated structure that is in the fore front of something that feels very fluid and soft. 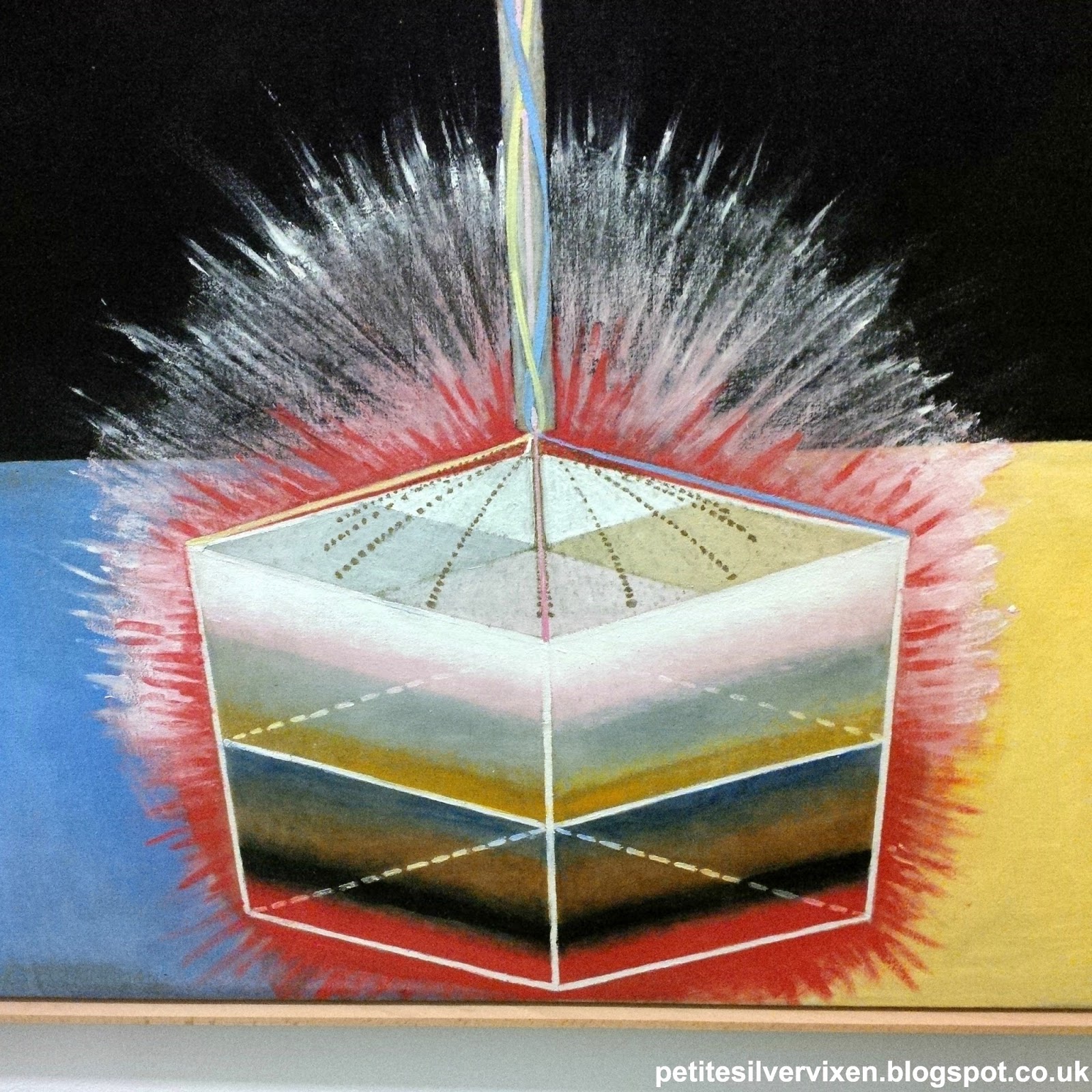 And here is the full painting. 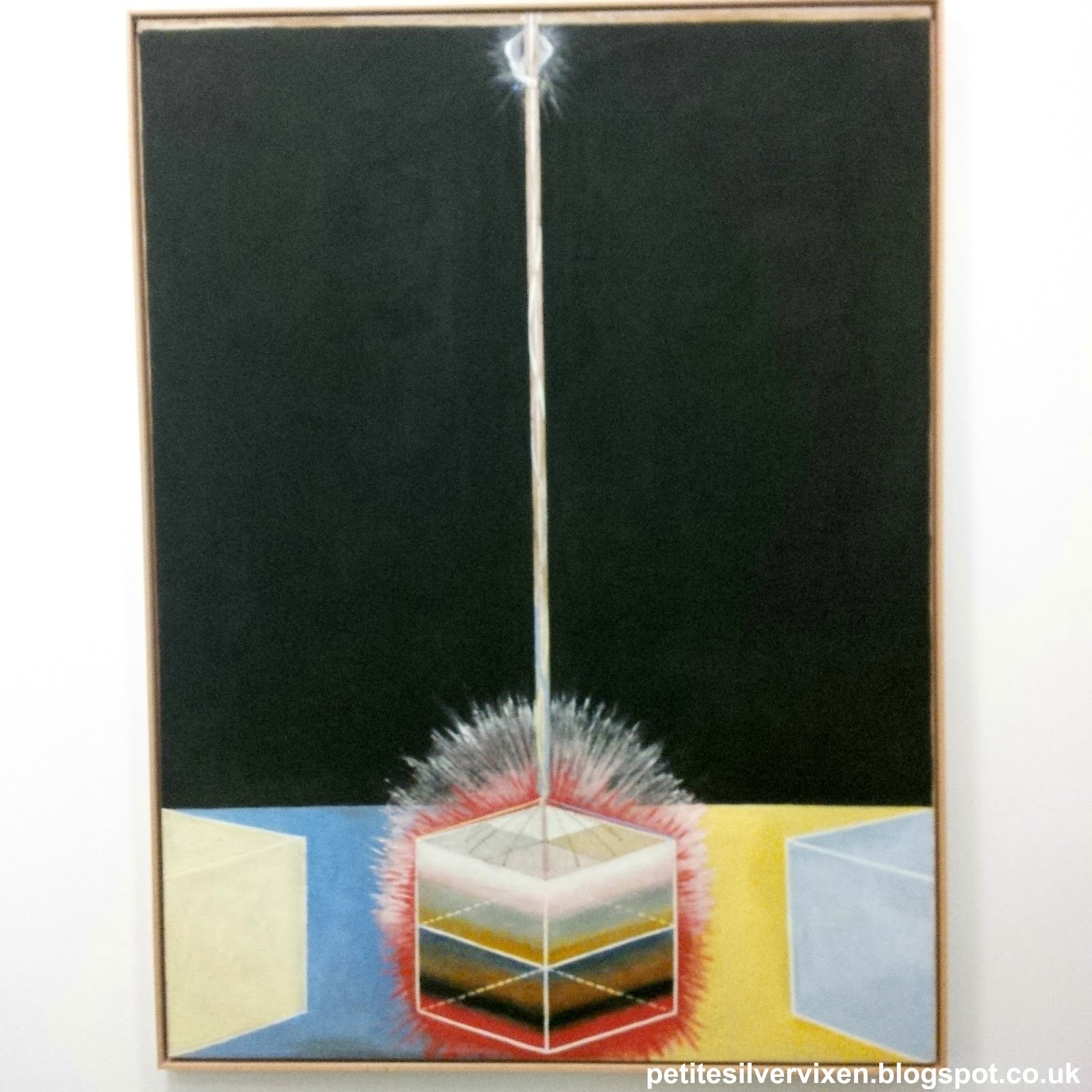 There were several series of smaller paintings and as Tall Brown Fox and I looked at this series, mainly in vivid greens and blues, we both independently agreed that the nearest painting in green and yellow, looked as if it was depicting synapes firing in the nervous system.

Synapes allow chemical or electrical signals to travel from neuron to neuron within the body. 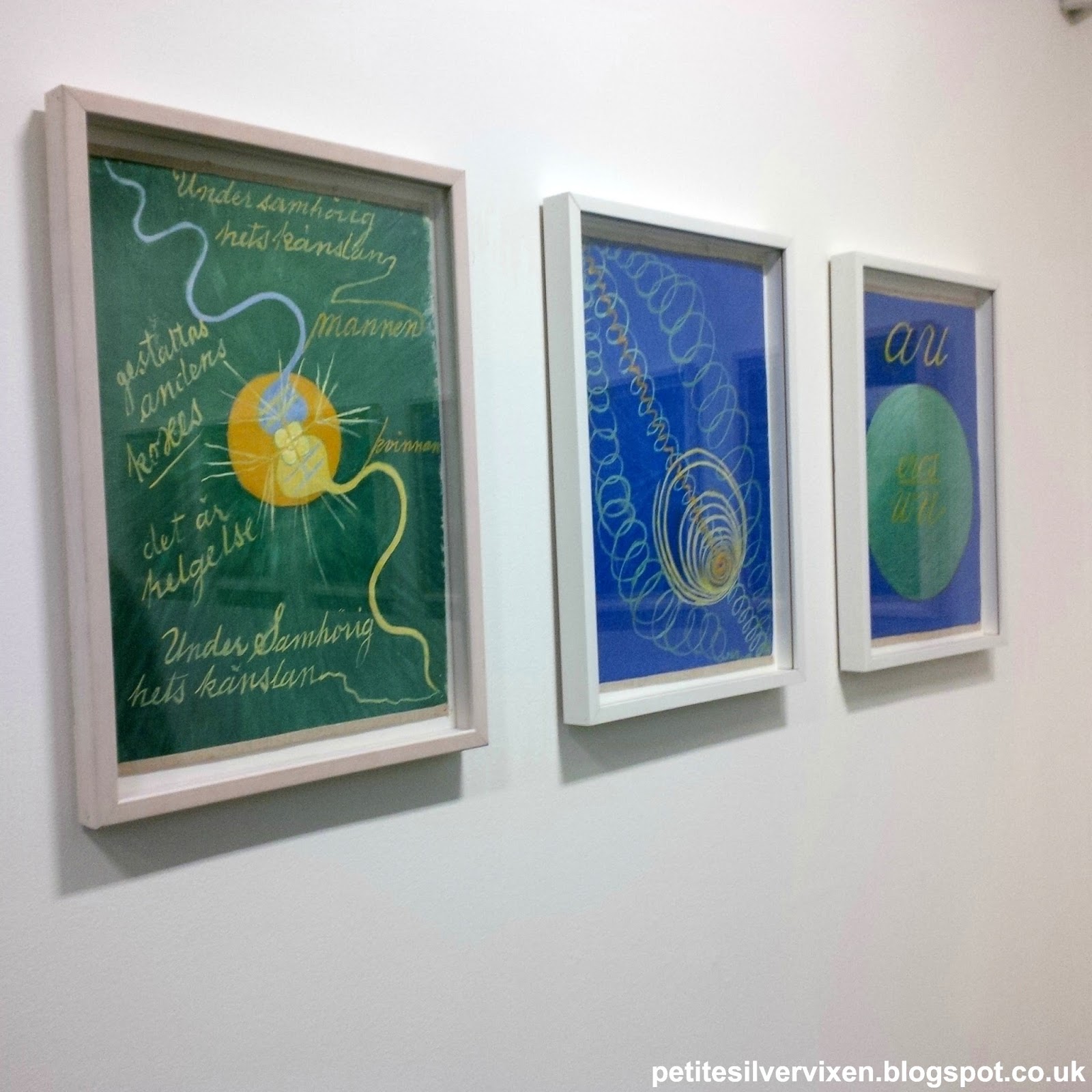 The next room housed a series of paintings called The Ten Largest.

They really show her fascination with nature. 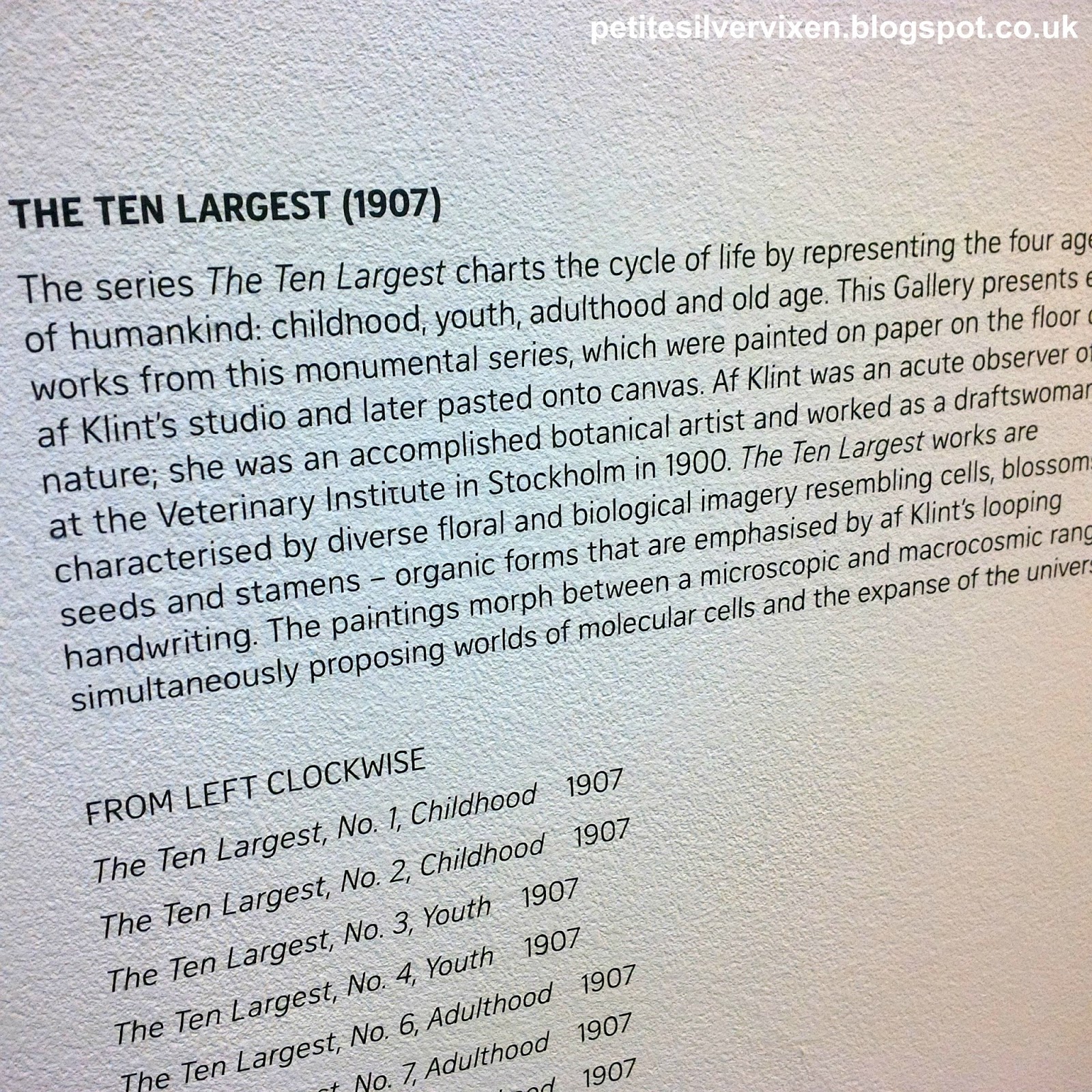 These were some of my favourite paintings in the exhibition.  The use of colour is so uplifting.  How artists use colour is always a source of inspiration for me when it comes to wearing colours in my clothes.

Seeing how beautiful the pink and the airforce or petrol blue are together in these two paintings made me realise that these paintings are a direct source of inspiration for one of my Seasonal Skinny Style Challenge outfits, when I’ll be styling my pink skinny jeans, once a week for the Summer.  I have a shirt in the same blue with, admittedly not orchids on it as in the left hand painting, but with a small dandelion print, that will look lovely with my pink skinny jeans! 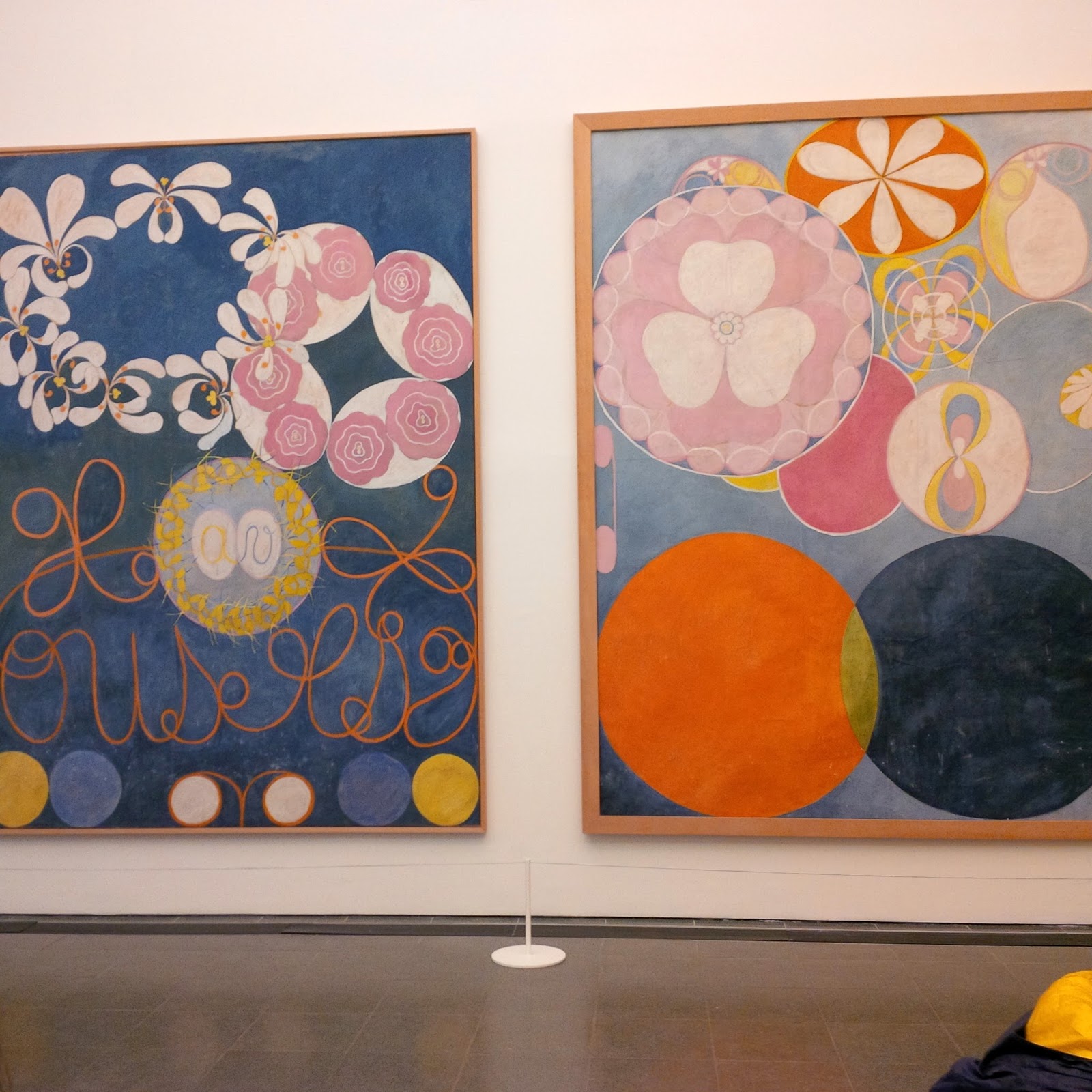 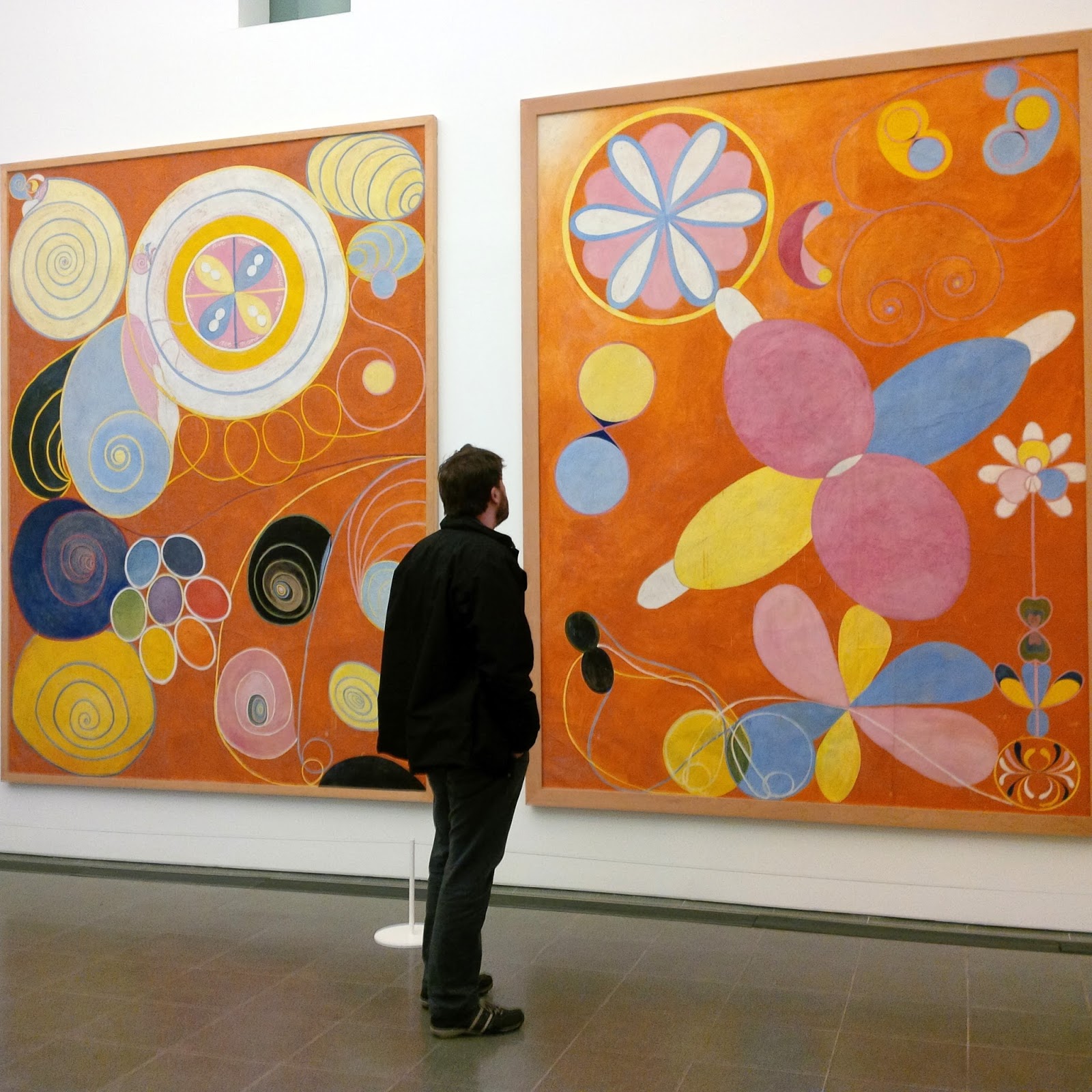 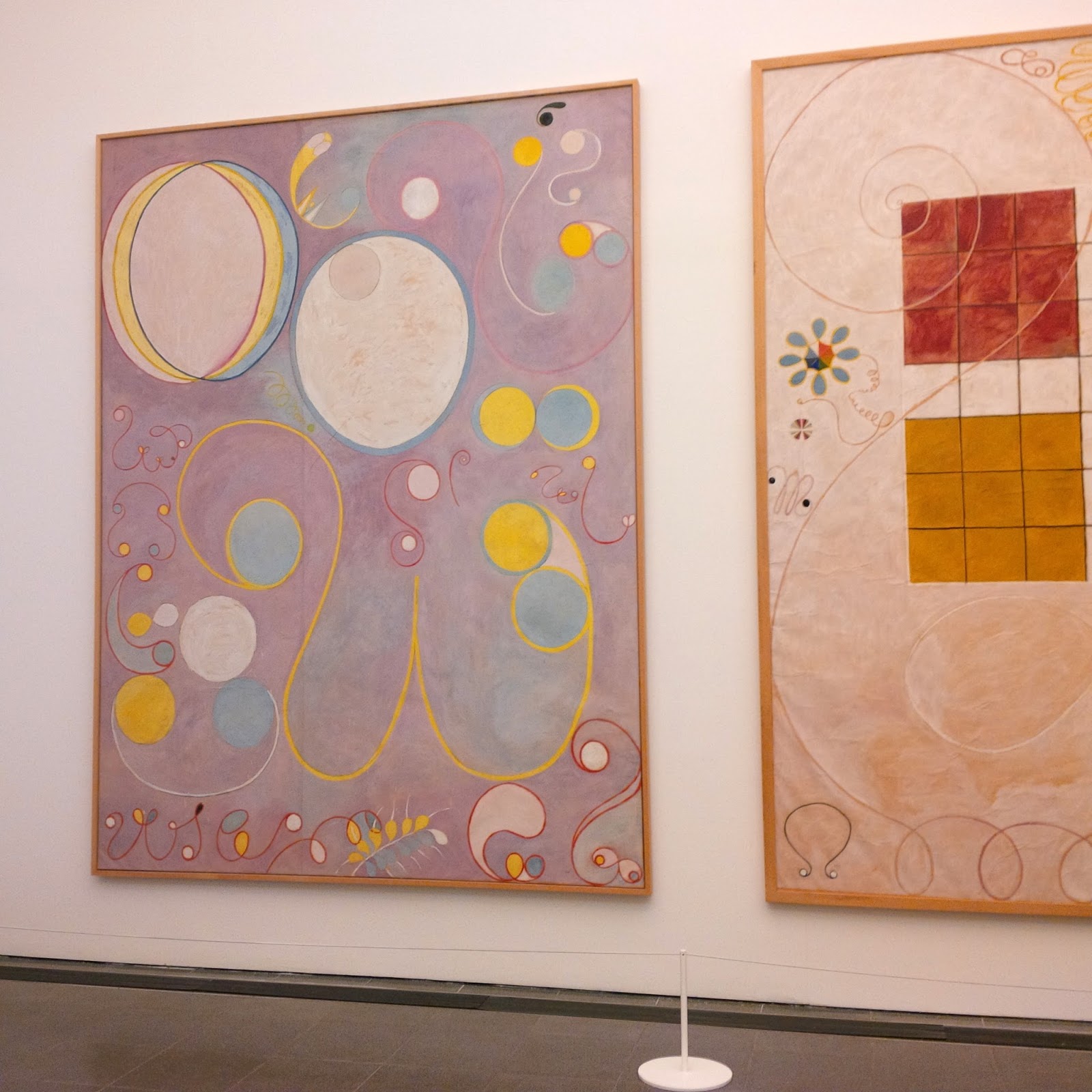 From such exuberance, we went to a very different colour palette and painting style with her Evolution Series.  Hilma was still using the pink but paired with it black and greys.

Still touching on many of the same themes and using circles and inter-linking structures but now including relatively naturalistic human figures in stylized poses. 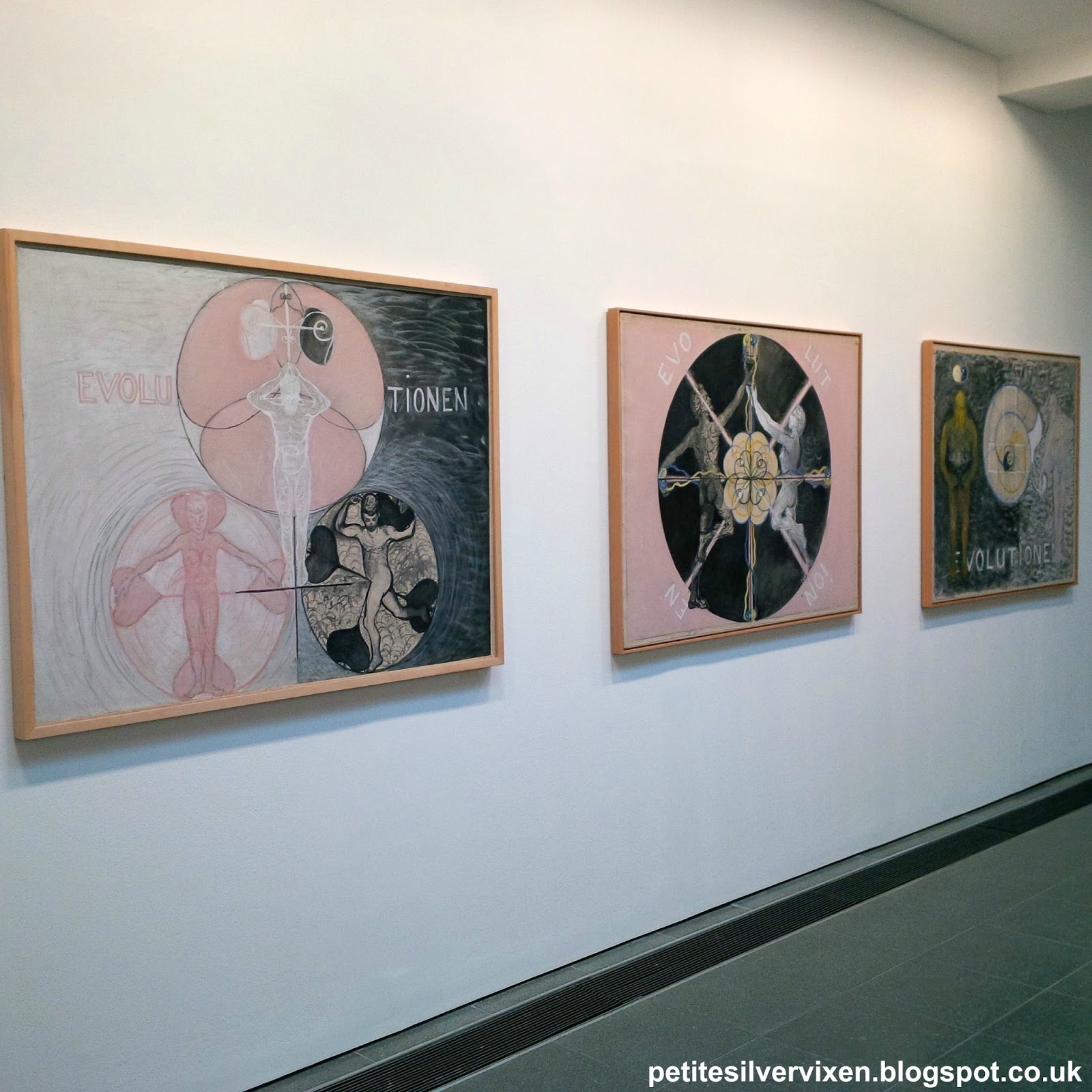 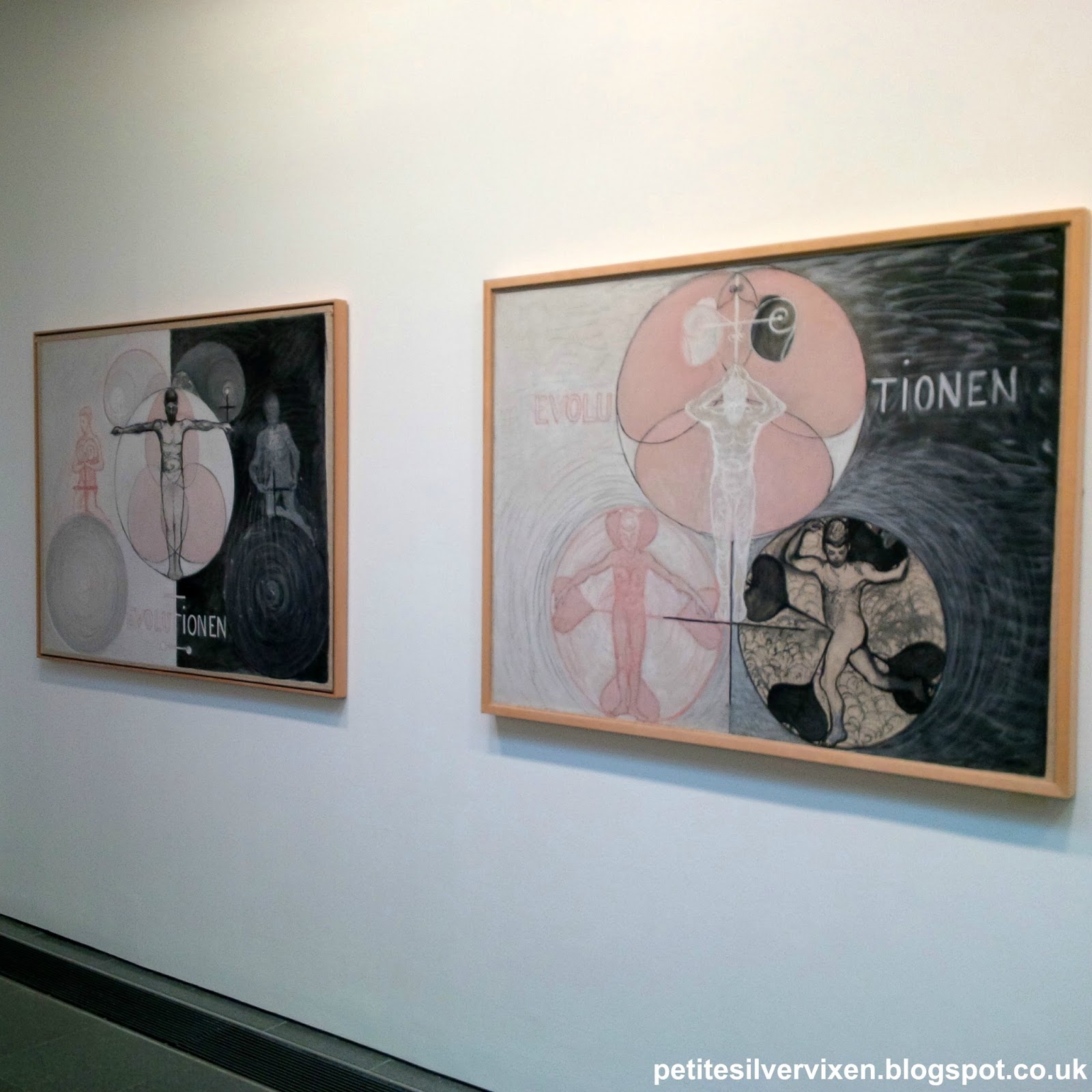 One thing I do love about exhibitions is when you get to see more than just the artist’s paintings but the whole of their work. There was a small cabinet that contained some of Hilma’s notebooks. Apparently she amassed 125 in her lifetime and even the small collection that was on display gave an intriguing insight into how she worked.

This is where you see the real beginnings of the artistic endeavour, where ideas start to become realised.  The internal workings of the human brain displayed with pen and paper.  Snippets of what may or may not turn into fully fledged pieces.

Maybe it’s because I’m a teacher and I’m the daughter of a teacher but I’m drawn to the processes involved in creating a piece of work whether that’s structural as in a building or a sculpture or even a garment, artistic as in paintings and drawings, or mechanical as in movement. Of course I’m fascinated by the end result but I’m always curious to learn how someone goes about creating what they do; their approach, their strategy to execute it, how they negotiate problems they might incur on the way. 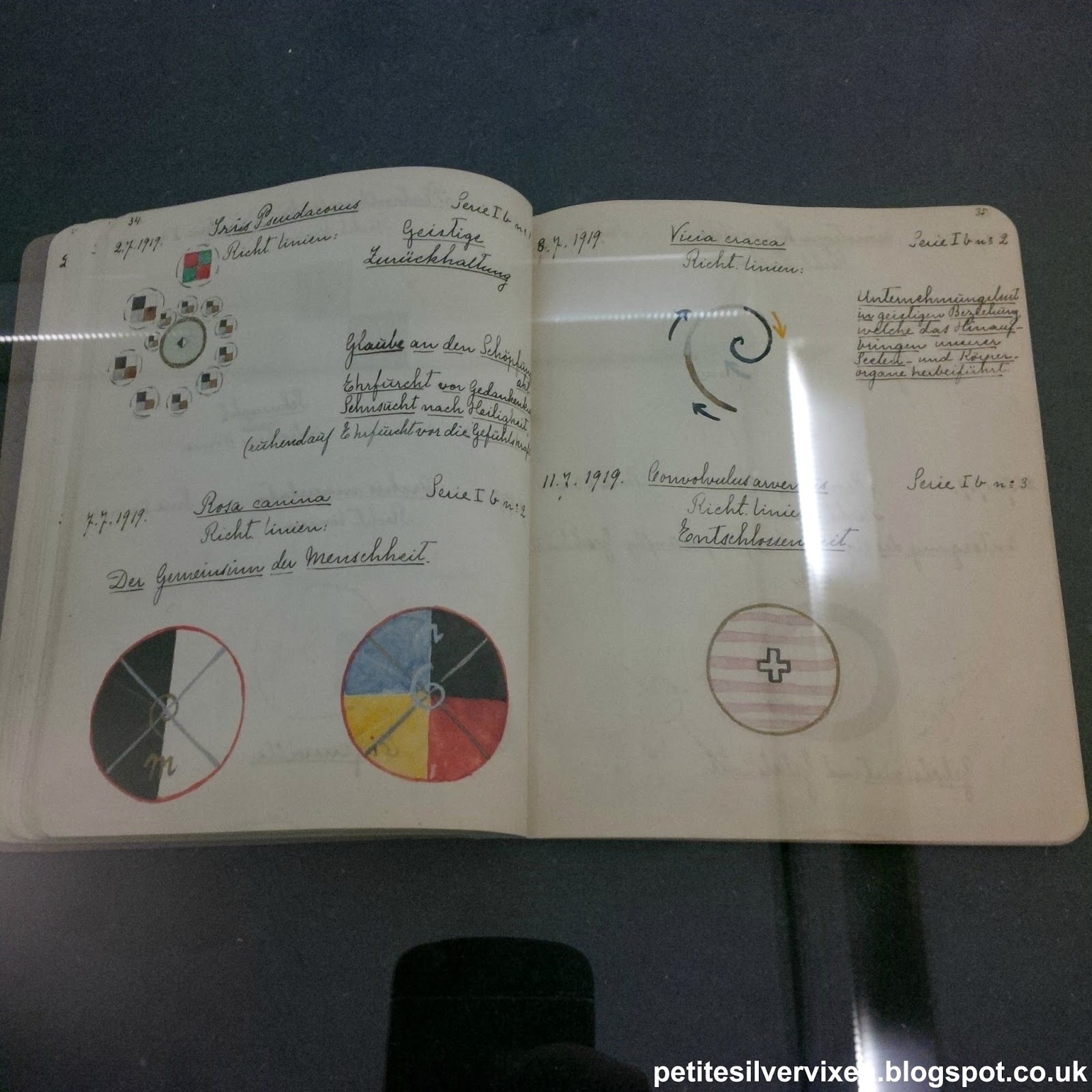 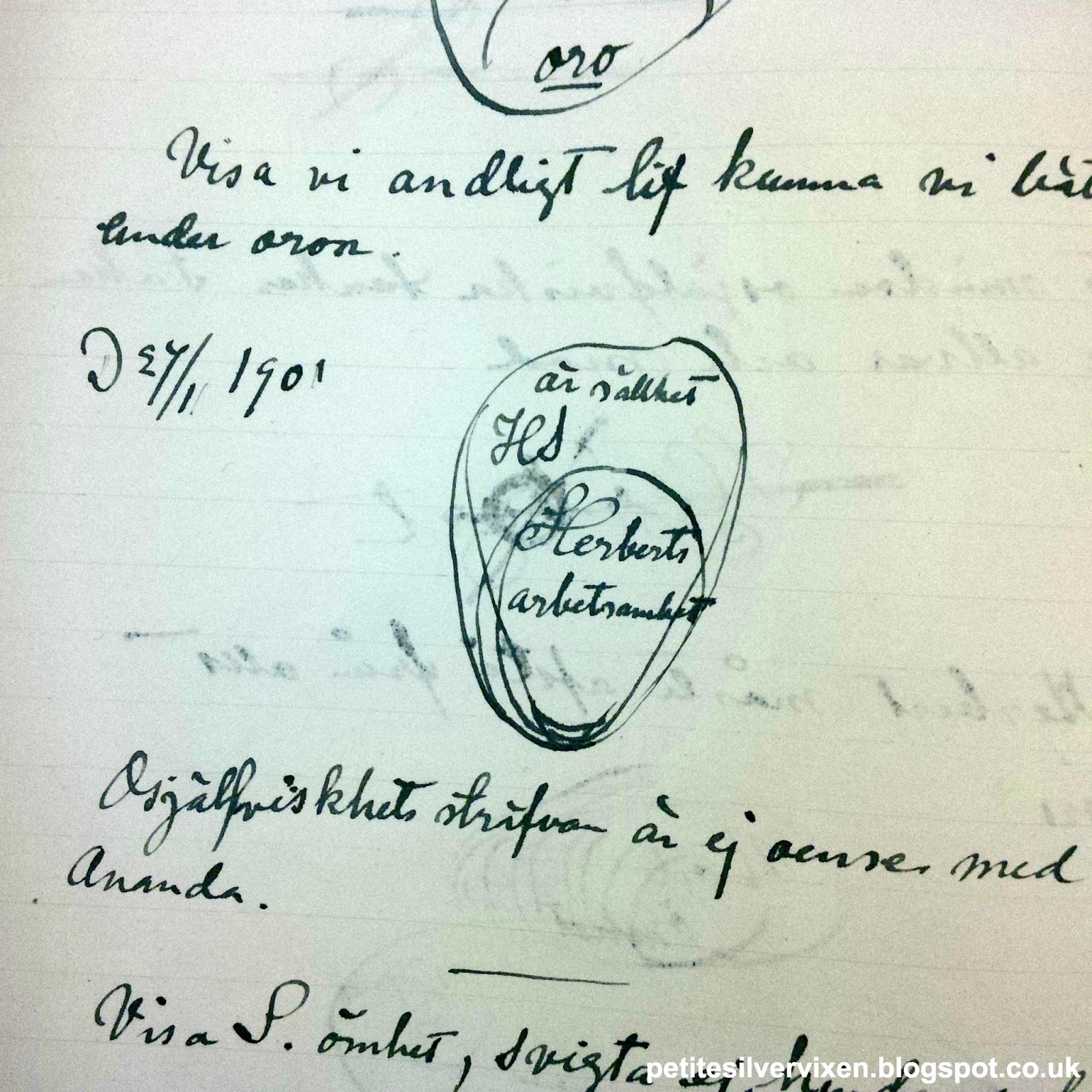 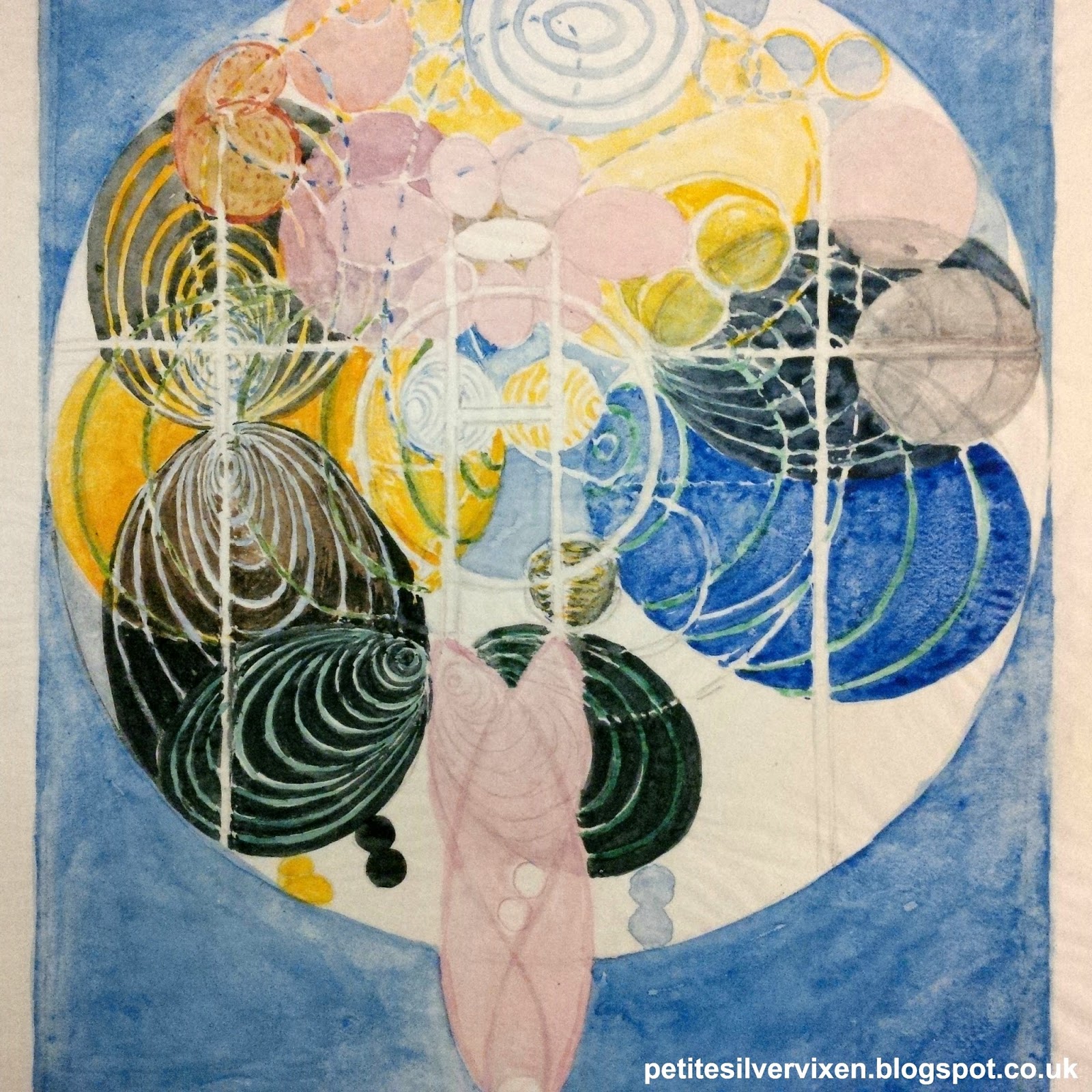 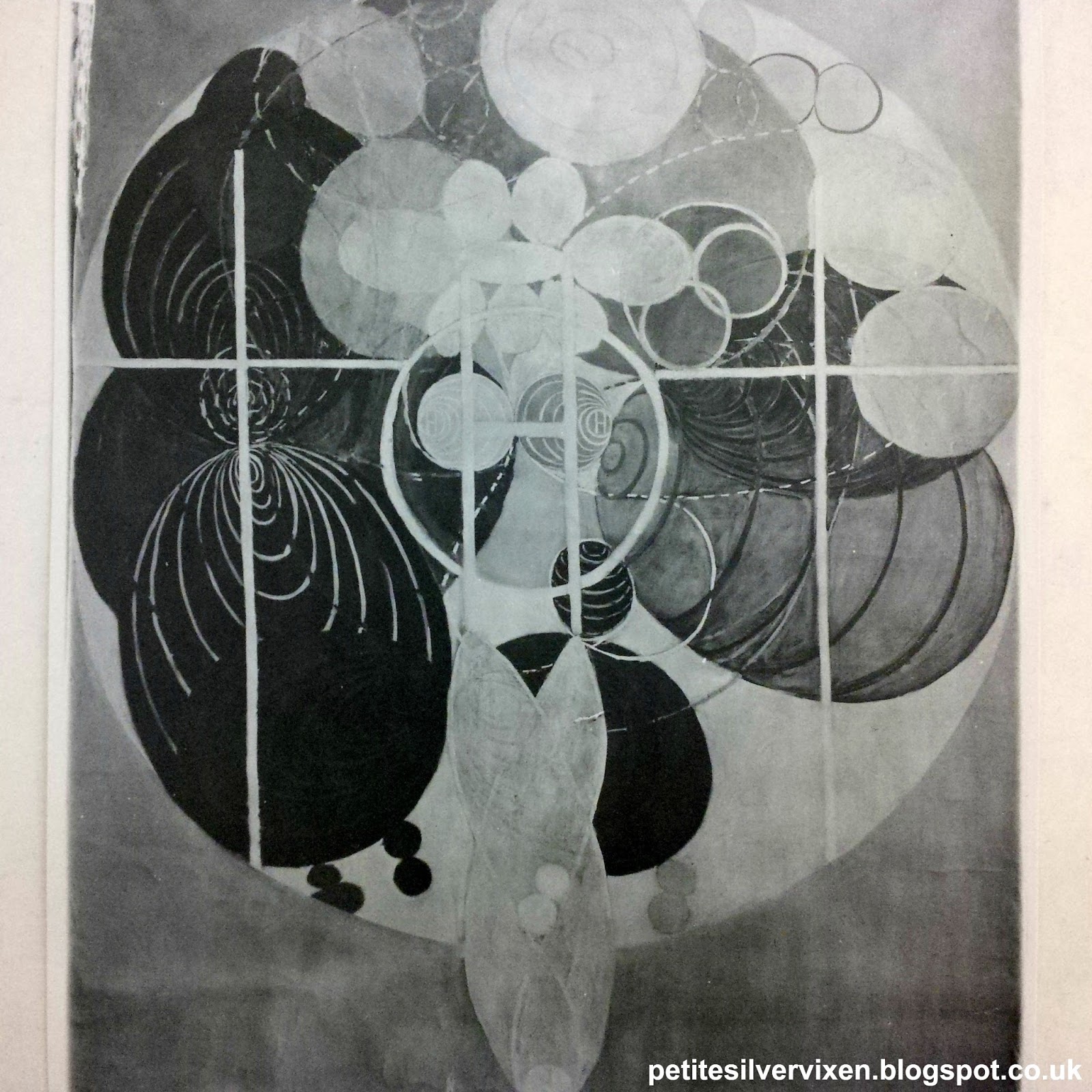 A series of smaller watercolour paintings. 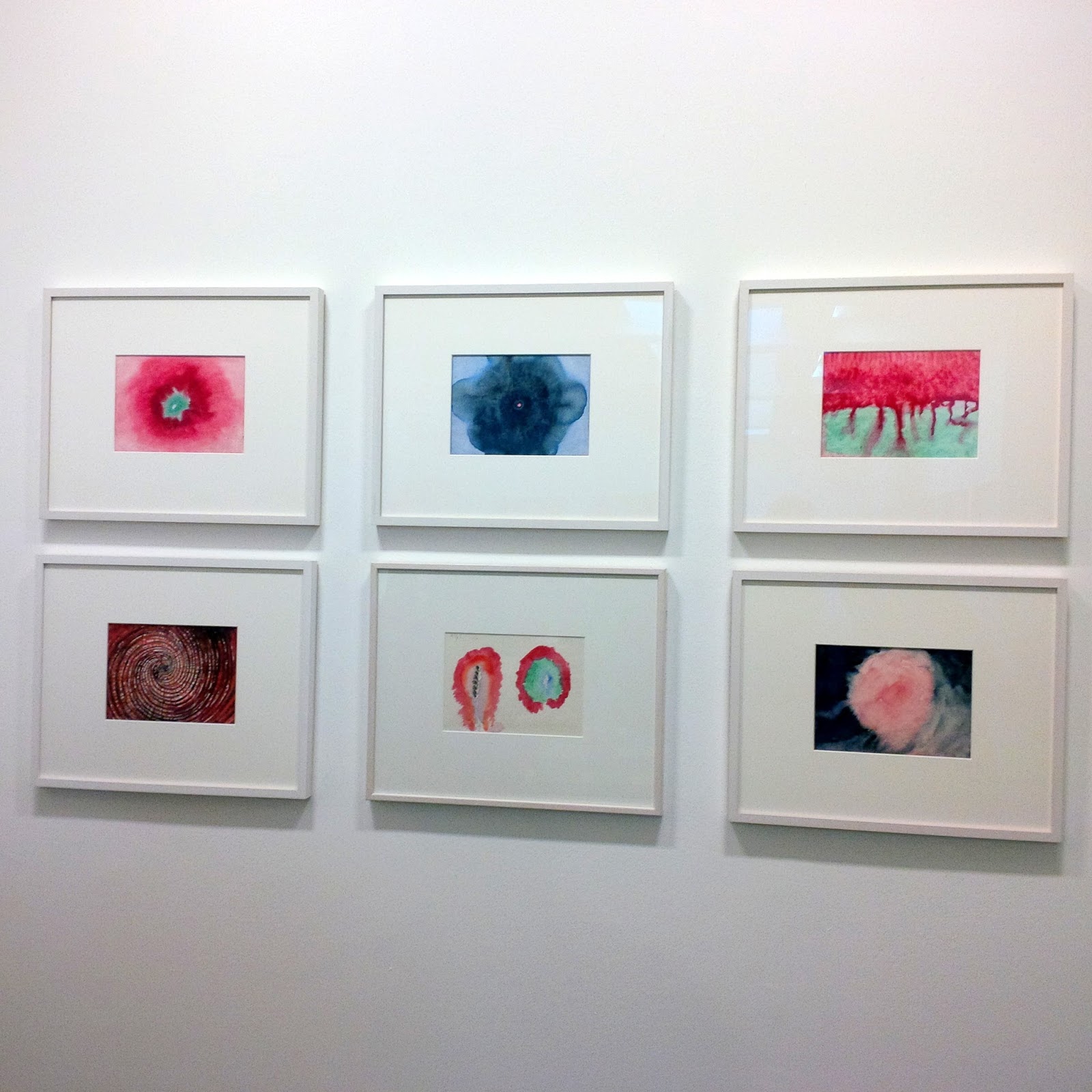 The exhibition isn’t very big – maybe 8 or 9 main sections.  As is always the case with exhibitions some people were whizzing through the rooms, others were meandering backwards and forwards, zig-zagging their way through, pausing to stop at one painting before being drawn back to an earlier piece in one of the preceding rooms. Others, like me, were taking our time, savouring it all, looking closely at one particular work, then stepping back to take in the full view, zooming in, zooming out. Like a camera lense!

Some people might be put off or be uncomfortable at the kind of the subject matters she was interested by but I certainly wasn’t.  She was living at a time during the end of the 19c and the beginning of the 20c, when mysticism, the exploration of the spiritual world, the development of new ideas and languages in art and science were abounding.  Old approaches were being questioned, and the growth of new schools of thought and philosophy, such as the Theosophical Movement, were at the forefront of many artistic, social, scientific and literary endeavours.

The exhibition showcases quite definitively how far ahead she was of contemporary male abstract painters, the Surrealists and other avant garde artists and how she refused to be confined by the mainstream artistic conventions of her time.

Hilma af Klint: Painting the Unseen is at the Serpentine Galleries until 15th May and is free.