‘Ne’re cast a clout till May be out’

In old English, a clout is a piece of cloth or clothing.

‘May’ is slightly ambiguous here; it may mean the actual month of May, but it’s much more likely to mean the blossom of the Hawthorn tree, which is often known as the May tree and whose flowers bloom in late April/early May.

So, in today’s English it means;

‘Don’t pack your Winter clothes away, until you’ve seen the May blossom!’

I heeded this sage advice over the Easter weekend, as although Spring is officially here – hurrah! – that North wind was still making its presence felt round our way on Easter Sunday, hence the need for beanie hat, gloves and scarf that day.  But with the clocks having sprung forward, I’m reveling in the longer daylight hours, and I’m ready to start wearing some lighter colours. 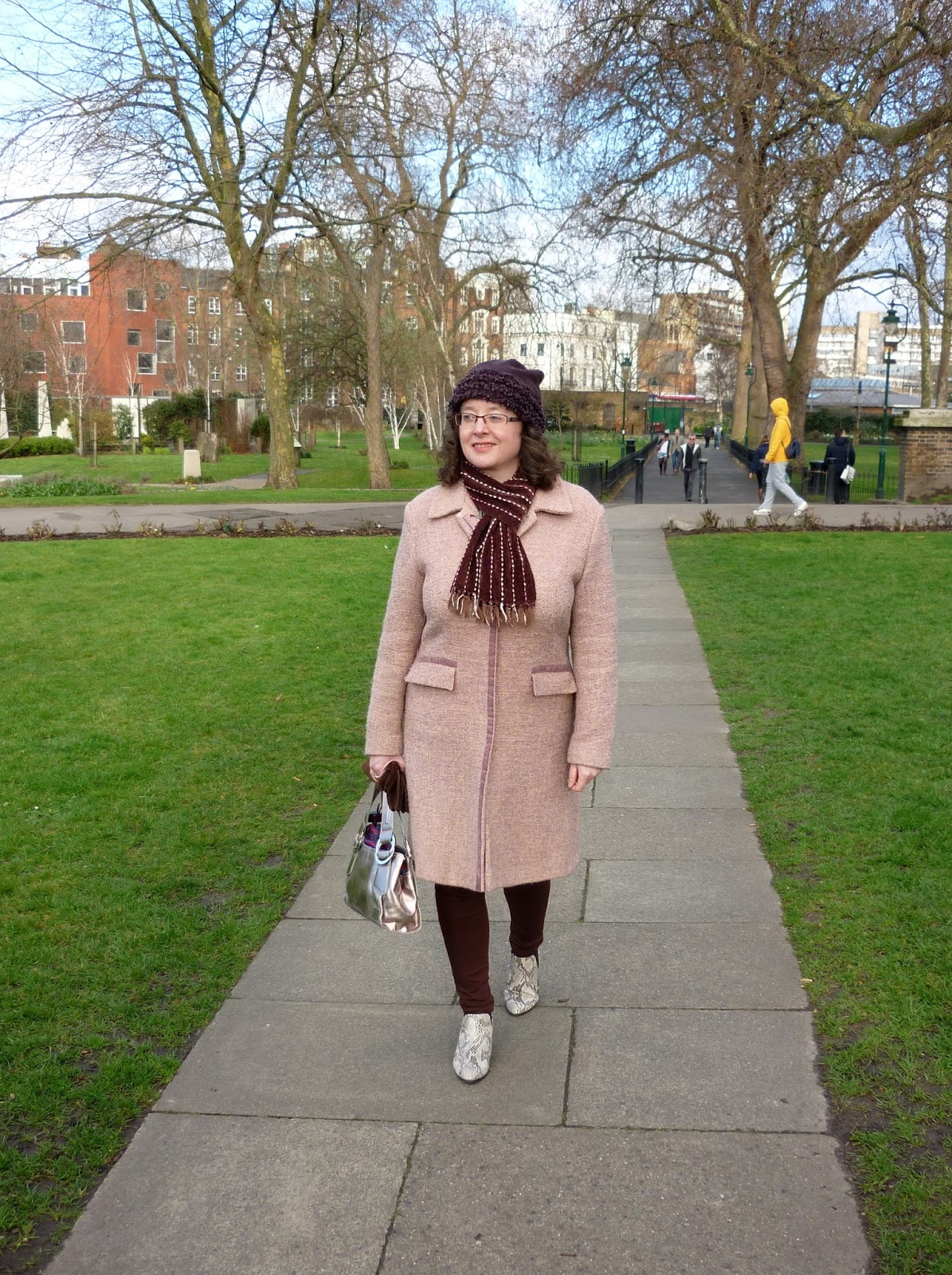 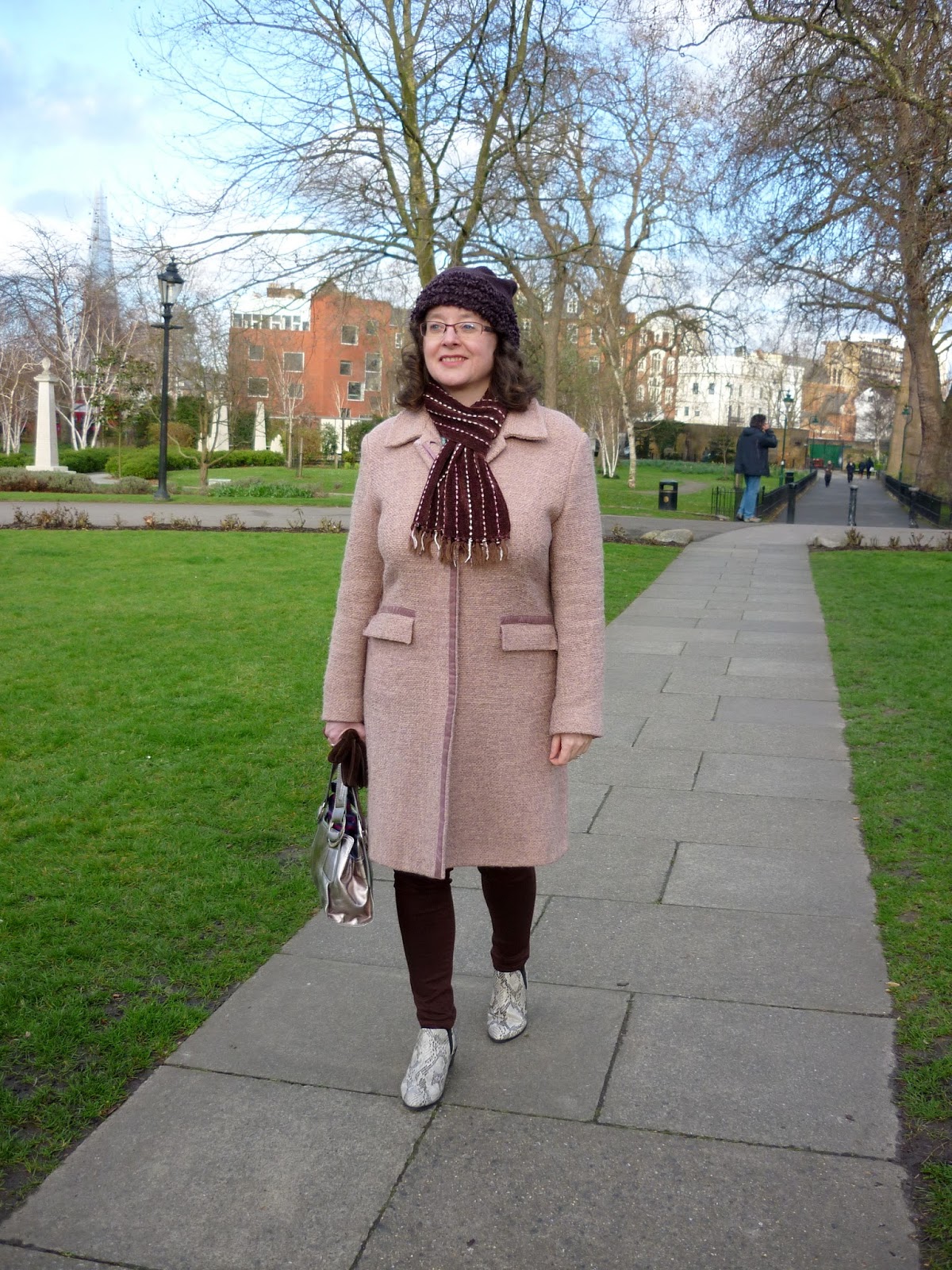 Springtime still requires a coat in this country (!) and I’ve the perfect coat for those Spring days when the air has a bite to it; one that’s lighter in weight and colour, all the better to reflect the new season.

Now it just so happens that my second outfit post of the week is one featuring a coat (Monday’s was my Double Denim post featuring my new trench coat), but hey, that’s just the way the bloggin’ post dice roll sometimes!  It’s a two coats for the price of one, blog week, you lucky readers!

One new, one old, both petite, both beloved.

Walk this earth long enough and you’ll learn that colours and styles in fashion are cyclical.  By now, you’ll know that Rose Quartz is one of Pantone’s colours for 2016.  Lucky me that this coat I bought – oh my – almost 20 years ago when petite ranges were few and far between, is now an en vogue colour!

And this isn’t a coat that’s been delicately wrapped away in my wardrobe.  Oh no, it’s been worn and I mean really worn; it was and still is a working coat.  I’ve loved it and looked after it and therefore it’s served me well to the extent it’s still going strong 2 decades later.  The lining is beginning to go in a couple of places sadly, BUT relining a coat isn’t such a big deal.

When I do get it relined, it will probably last another 20 years! 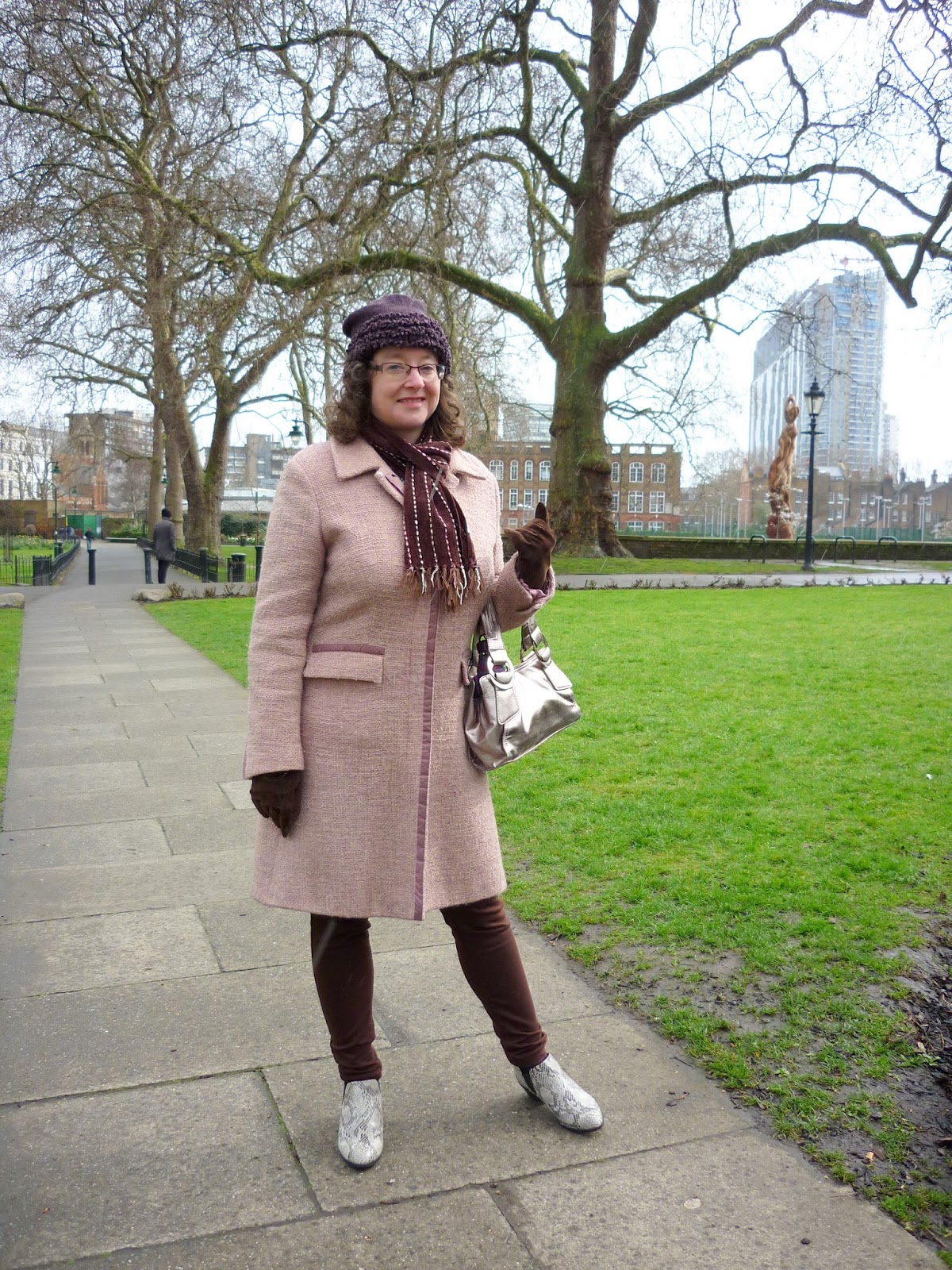 I’ve seen many bloggers pairing rose quartz, light pink and all shades of blush with grey.  However, knowing I had this chocolate brown scarf with ivory and rose coloured threads running through it, it was obvious I had to pair the coat with said scarf and my chocolate brown skinny jeans (seen recently in my Subtle Pattern Mixing post).

Light pinks can feel ‘twee’; bordering perilously close to ‘girly’ territory. Fine if you’re a 20 something but maybe not the look you want to portray if you’re nearing your half century and not out!

The earthiness of the chocolate brown, grounds the pink without over-powering it.  The two complimenting colours of the threads in the scarf stop the brown from being too one note.  Adding a metallic bag and snakeskin boots – both of which are trends this Spring – easily updates the coat and provides colour contrast.

You’re now safely away from the realms of  ‘girly’!    PHEW! 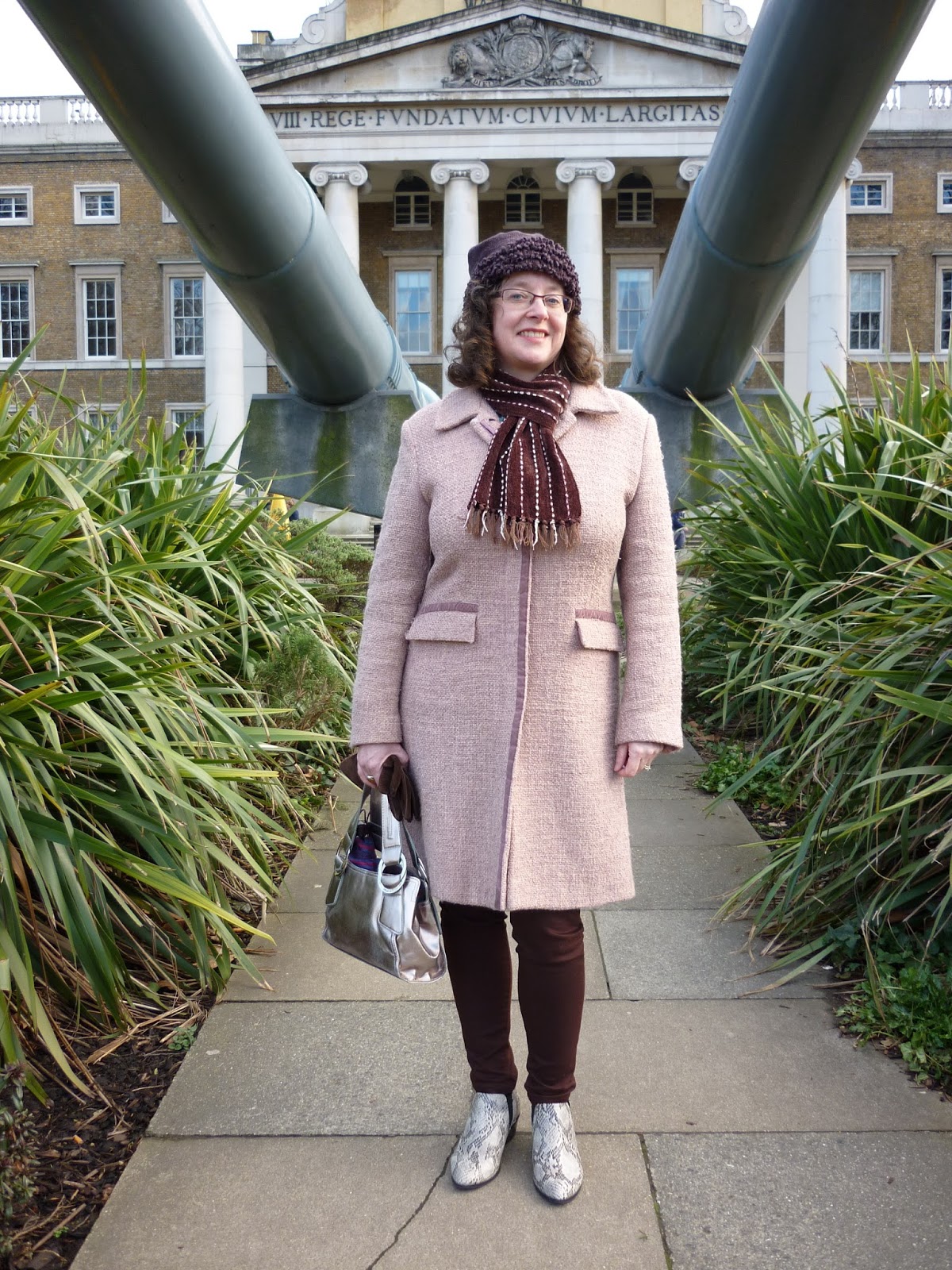 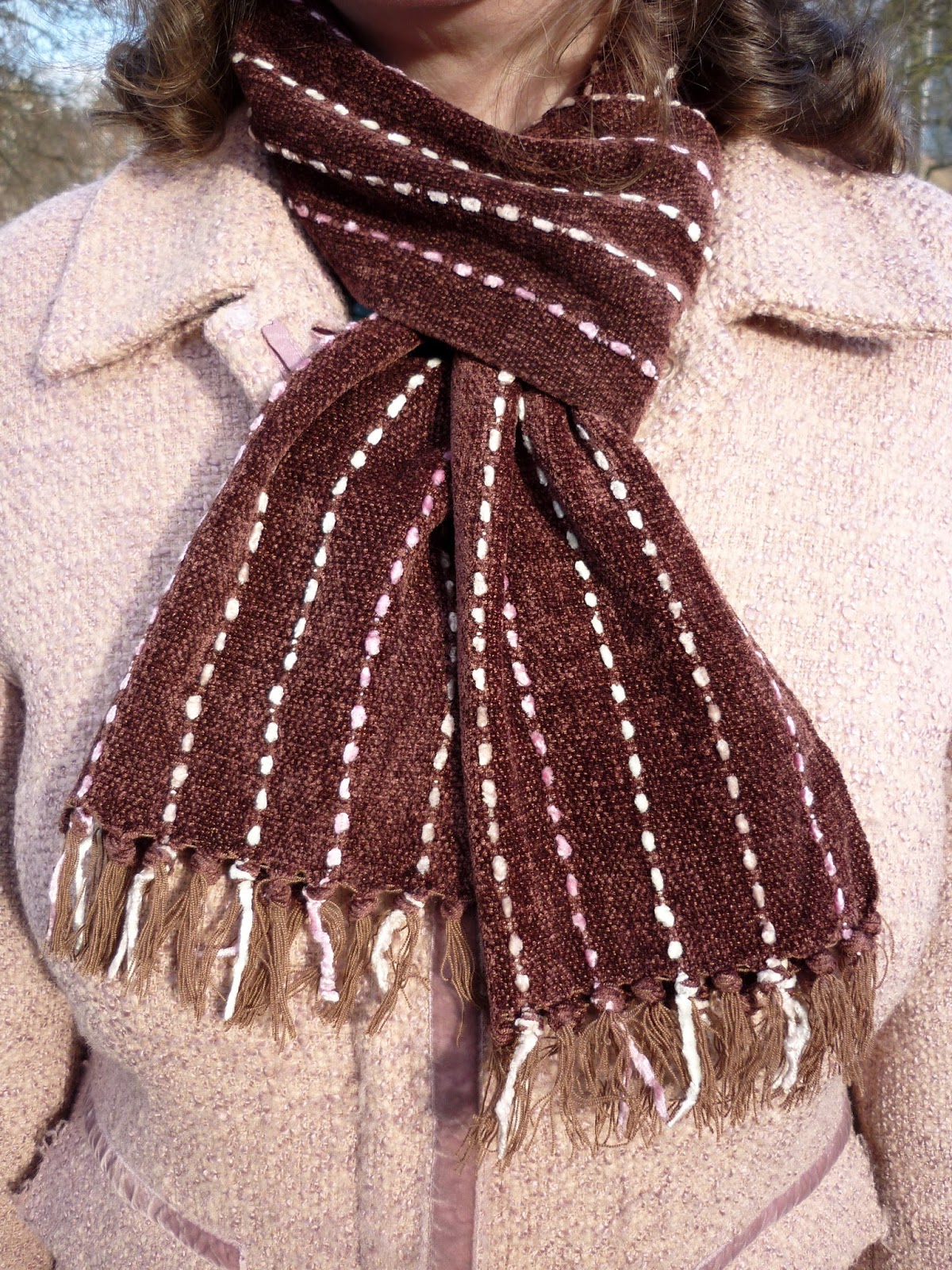 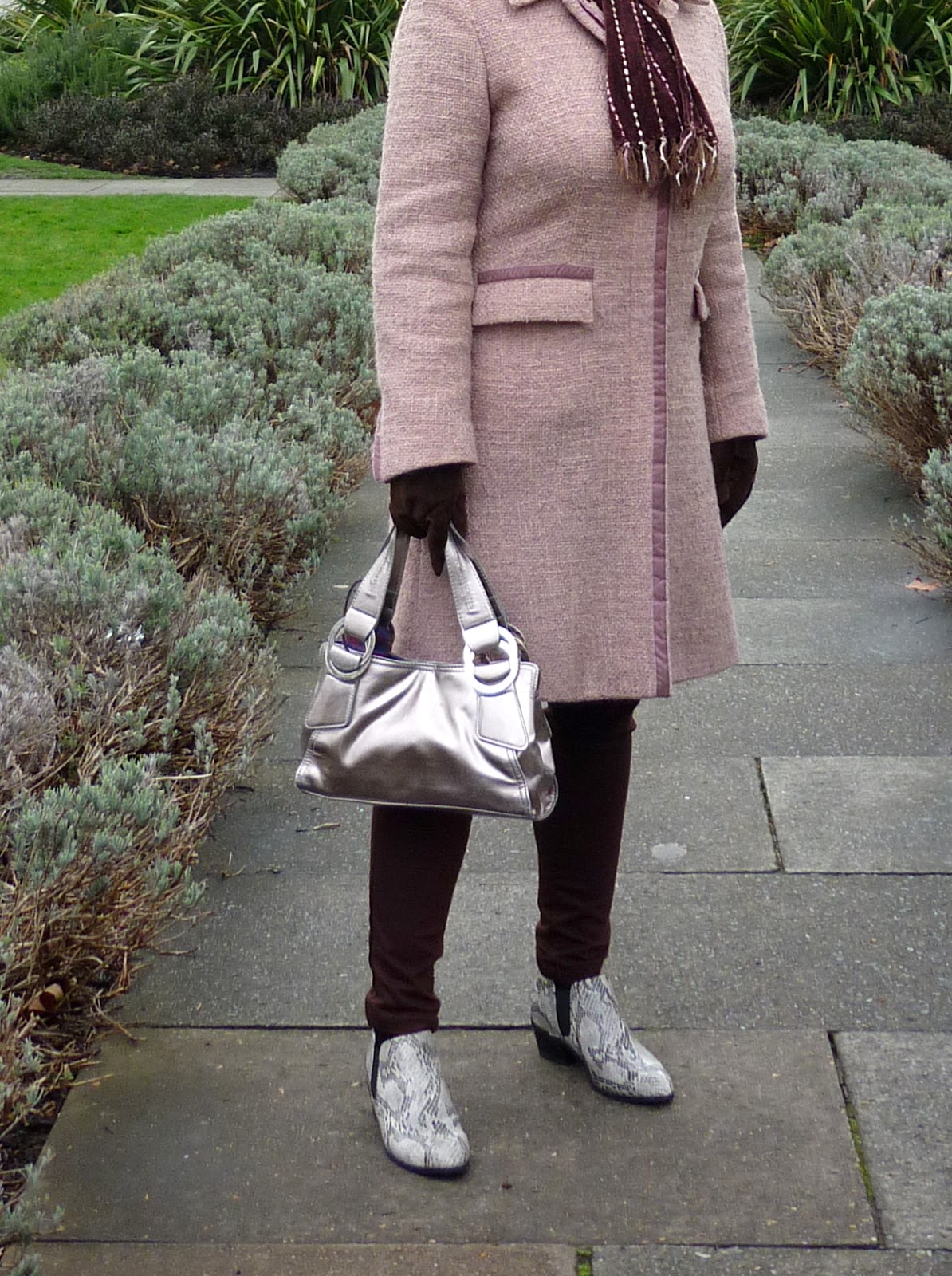 And here’s a sneaky peak at what I was wearing underneath the coat – only a peak mind – as the full post will be touching down next week. Because we’re transitioning into Spring, I mirrored on the inside what I did outside by pairing light colours with dark; a bright cardigan and a floral top in shades of aqua, mink and maroon!  Oh, aren’t I just so fancy pants with my colour names!  Well, they’re a little more exciting than just saying blue and beige!

Beloved Coat Footnote
Never throw something away because you worry it’s not ‘trendy’ anymore.  If you love it and it works for you, cherish it and let it bring you joy.

Spending a little time taking care of the items you love in your wardrobe will pay dividends and sooner than you think, they’ll be back in style again, (give or take a decade or two)! 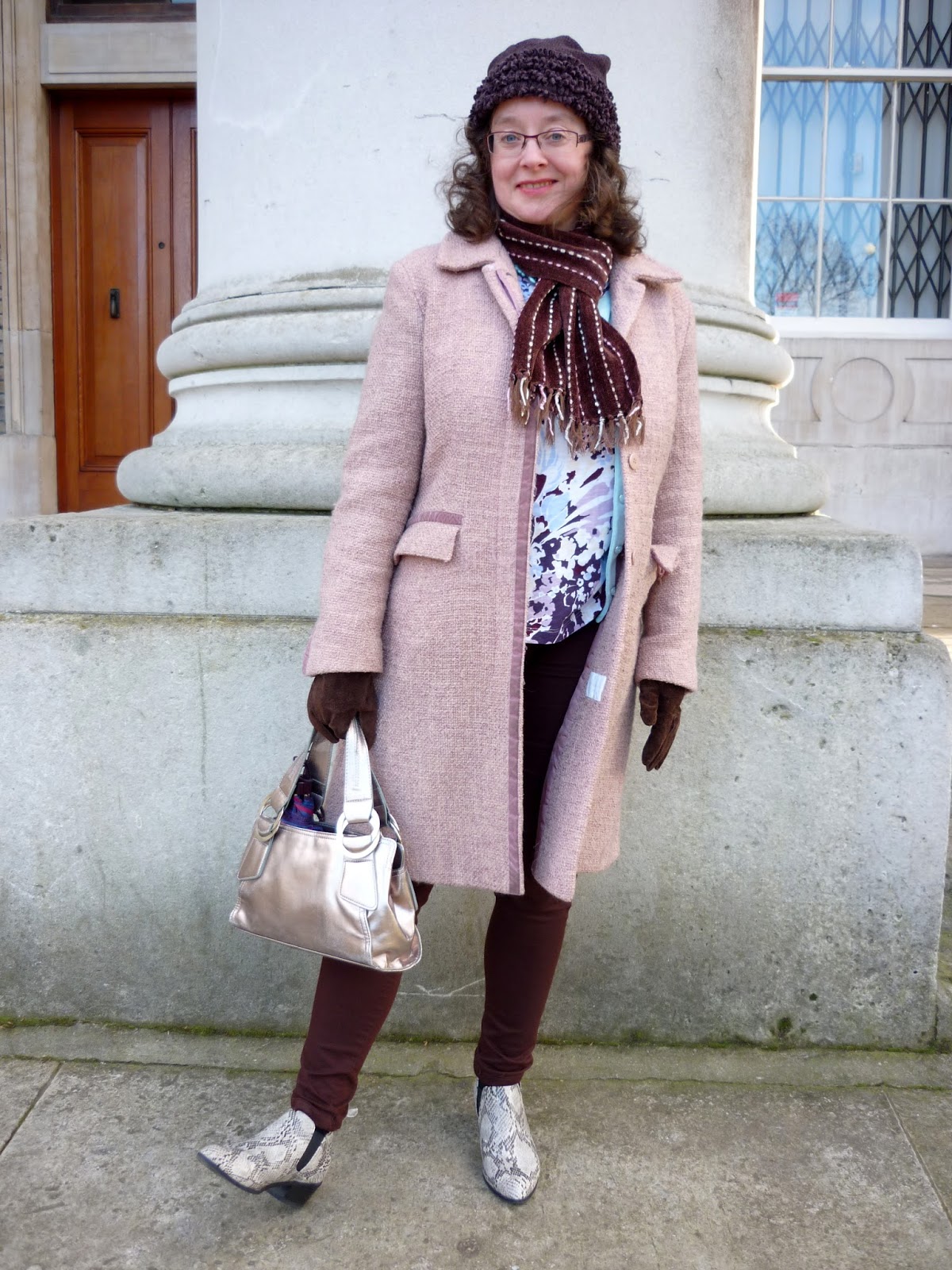 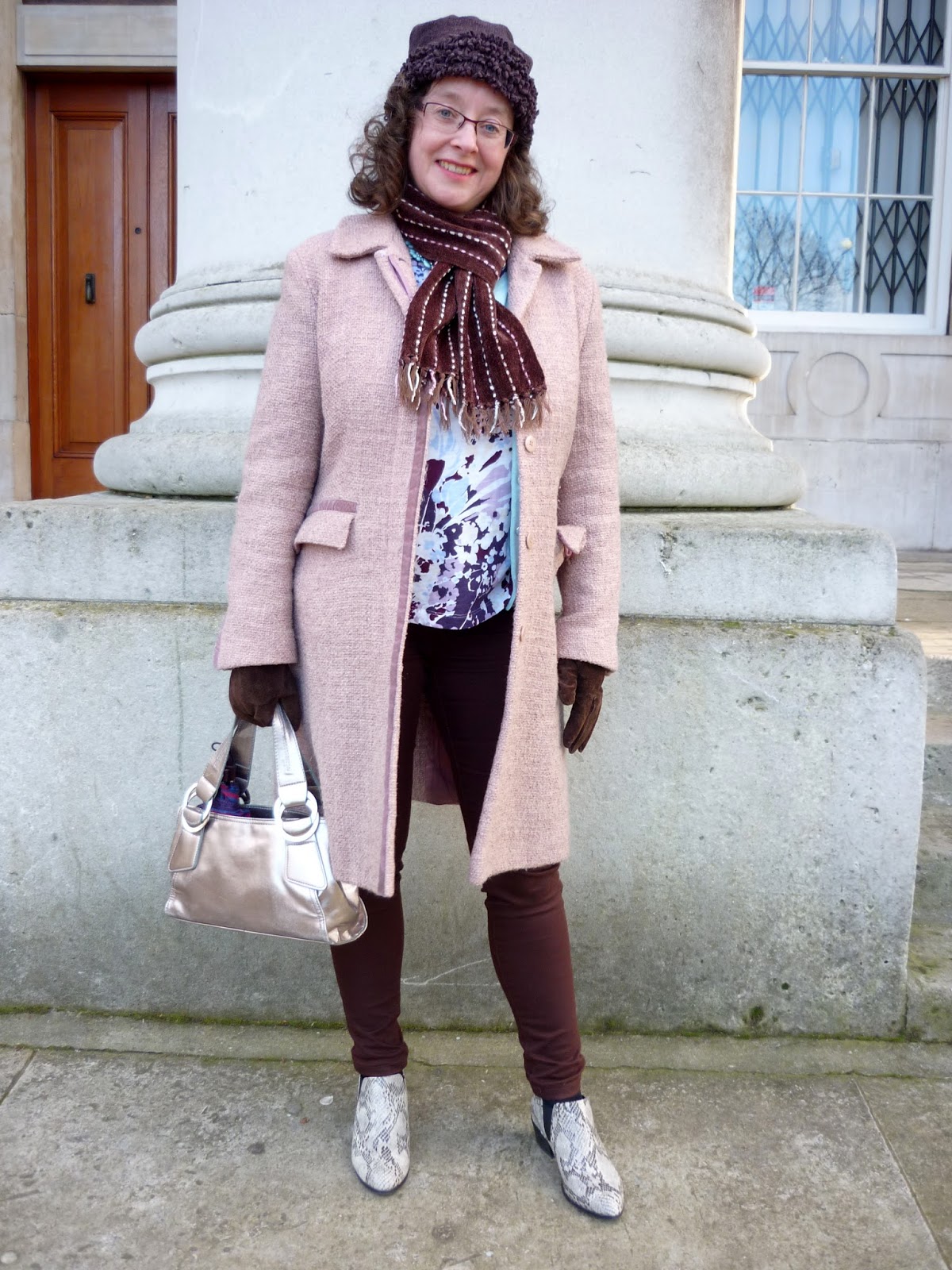 Depending where in the world you are, are you transitioning into lighter layers and more Spring-like colours or is Spring still a way off for you?

And what beloved items are still going strong in your wardrobe?