Culottes – tricky garments, aren’t they?  Do you wear them or are you wary, wondering whether you’ll be swallowed up by swathes of wafting material?

Following the success of my How to Style a Maxi Shirt 3 Ways, I thought I’d follow it up with another How To Style post on an item that can be tricky to get right, particularly for a petite. 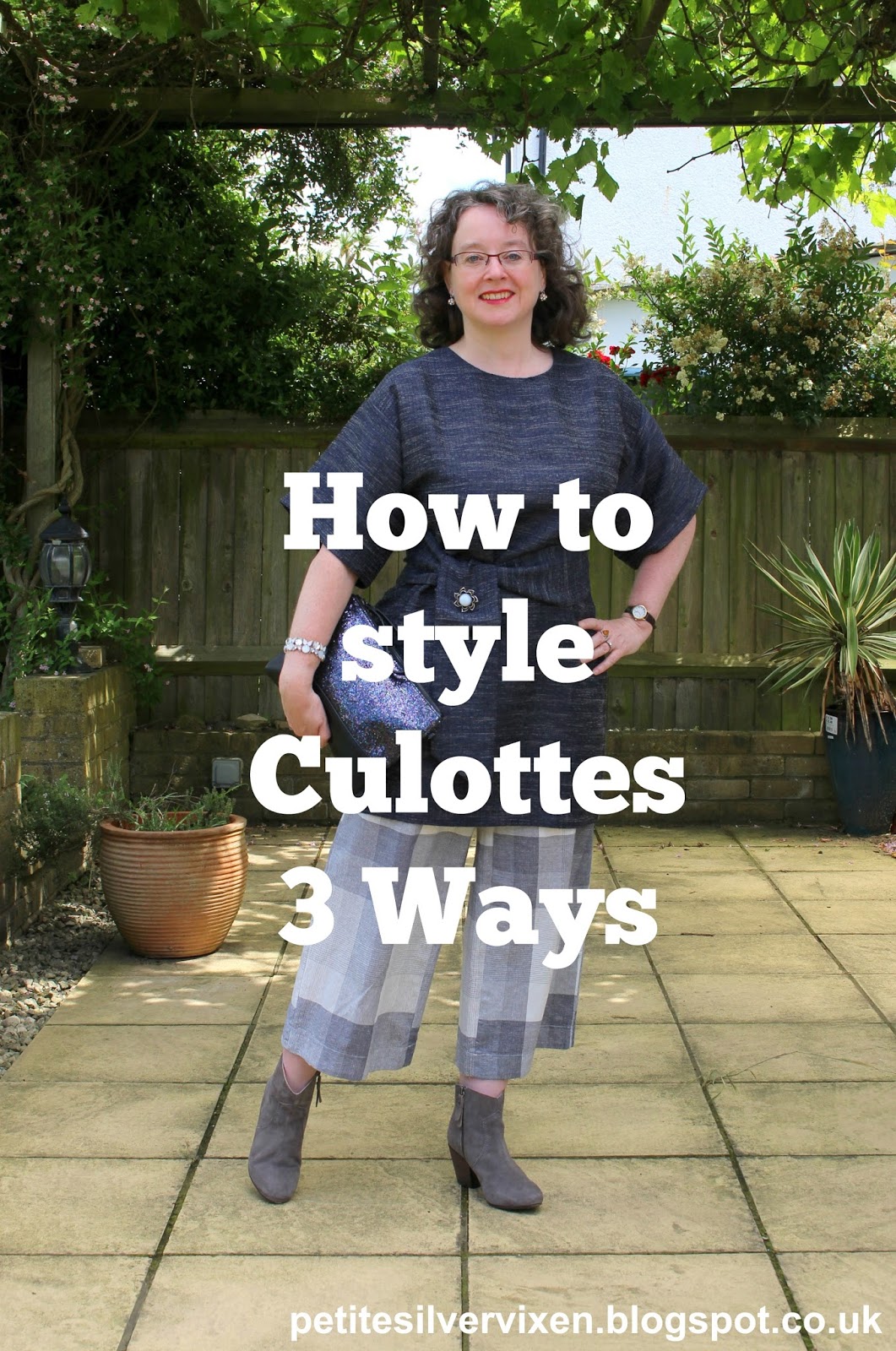 There’s been something of a renaissance in trouser styles the last few seasons. The choice of length, cut and fit is mind boggling – bistro, cigarette, crop, wide legged crop, capri, cargo, palazzo, culottes and this year’s new kid on the block – the crop kick flare.  Truly a style and shape to tempt and please everybody’s body and taste.  And this is true for culottes from knee length styles to full on ankle skimming gauchos.  I’ll stick with the term culottes for the rest of the post, as this seems the most commonly used word.

A decade ago I would’ve run for the hills at the thought of wearing culottes, labelling them fuddy duddy!

However, they’ve grown on me and last year I searched for a pair but without success.  Cut, fit, material, didn’t make the grade. Undeterred, I thought I’d give it another whirl this year and prepared myself for a long and potentially impossible haul to culotte heaven.

I tried 3 pairs for starters.  First pair from New Look were pretty much like last year’s and were discarded for exactly the same reason as the previous season.  Cheap, shiny material.

Oh my, the pleats made them soooo voluminous, if I’d had a spinnaker, I could’ve rigged them up the mast and sailed to the Caribbean with them!  Back they went.  And whoever thought such voluminous pants on a petite was a good idea also needs to go back to fashion design school! 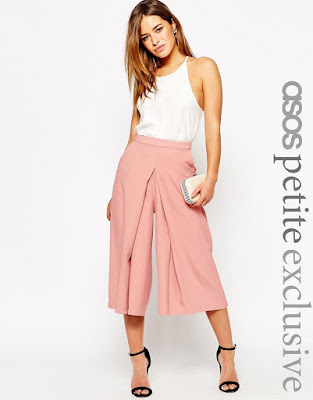 The 3rd pair, these ASOS Petite Linen Check Culottes were bought on a whim.

But they were bought because I liked they were a linen mix, and the wide check pattern.

Well stone the crows, if they didn’t just turn out fine and dandy!

Yes, they are long, more gaucho in length but not overwhelmingly so.
The tie belt isn’t too bulky and you can wear them without it.
The silver grey goes with sooo many colours.
AND they’ve got deep and I mean DEEP pockets! 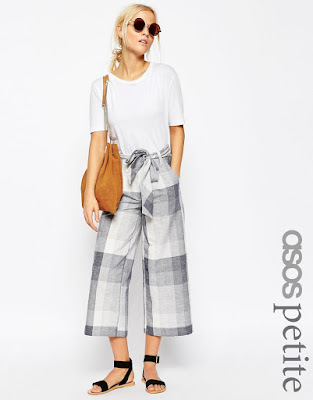 On our recent city break to Copenhagen, Denmark, they were one of the first items I packed in my suitcase so, I’m starting with an easy, yet stylish look from my trip.

Clothes you pack for holidays should ideally be able to make multiple outfits, more so if you’re travelling with hand luggage only.  Having worn the culottes for a day of sightseeing with a white embroidery anglaise top, they also had to do a turn for a night out.

In the warm glow of a Copenhagen evening, Tall Brown Fox and I went for a casual dinner to Papirøen, or Paper Island. Formerly a giant, paper storage warehouse in the harbour, it’s a foodie landmark in the City, as part of it now houses Copenhagen Street Food.  Over 20 different food stalls selling street food from all over the world alongside local cuisine.

Soft textures of a chambray top and a light wash denim jacket with rolled up sleeves blended perfectly with the linen culottes and suited the laid back vibe of the venue.  Metallic accessories of cross body bag, necklace and spiral bracelet all work with the silver greys and blues.

Style Tip: When walking on cobblestones, of which there are many in Copenhagen, there ain’t no point wearing high heels, unless you want to take 3 hours wobbling your way to somewhere!

My block heel, Topshop Ghillies, which were such a fantastic buy last year, made light of this tricky road surface and I think look just adorable with the culottes! 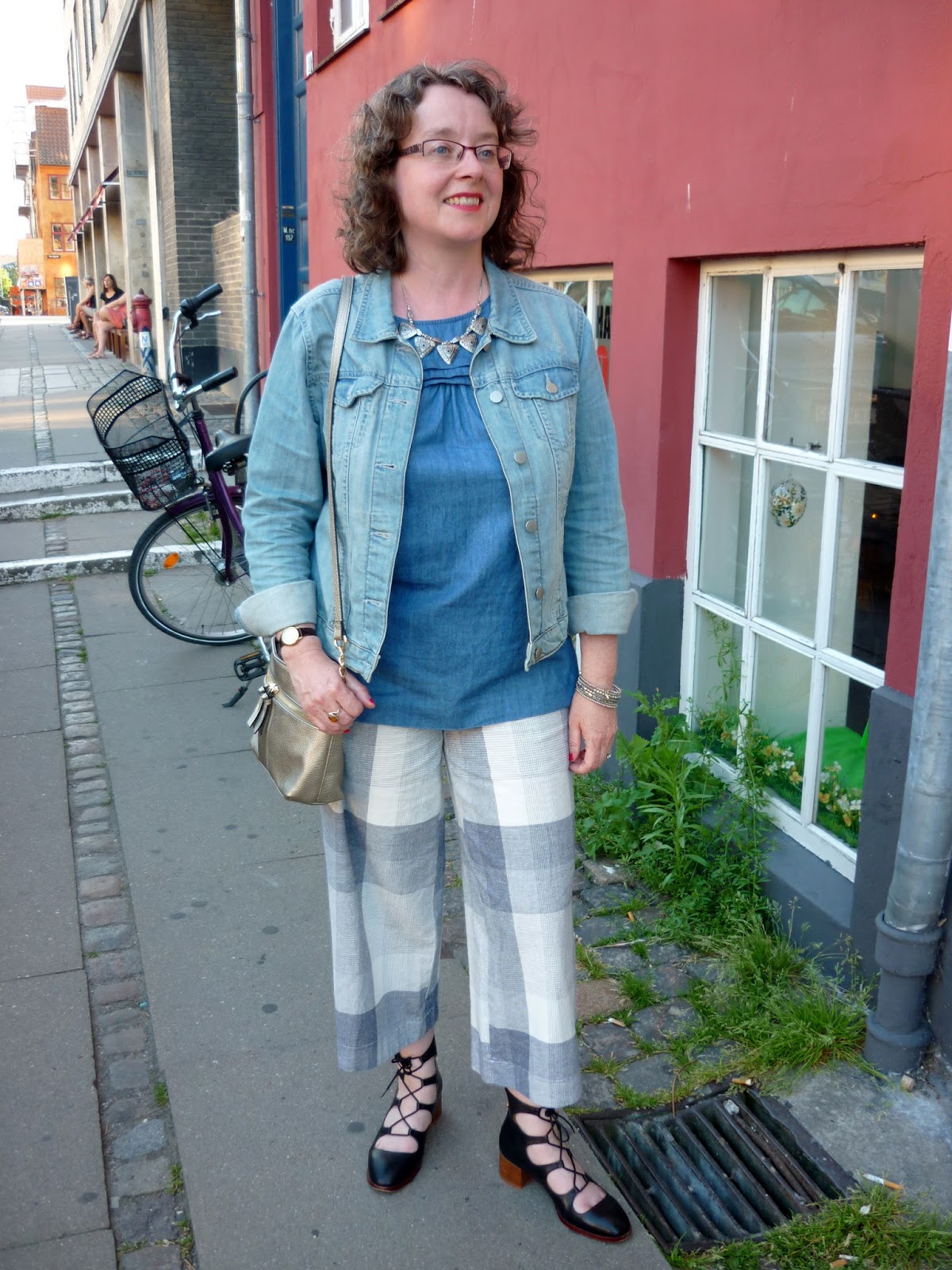 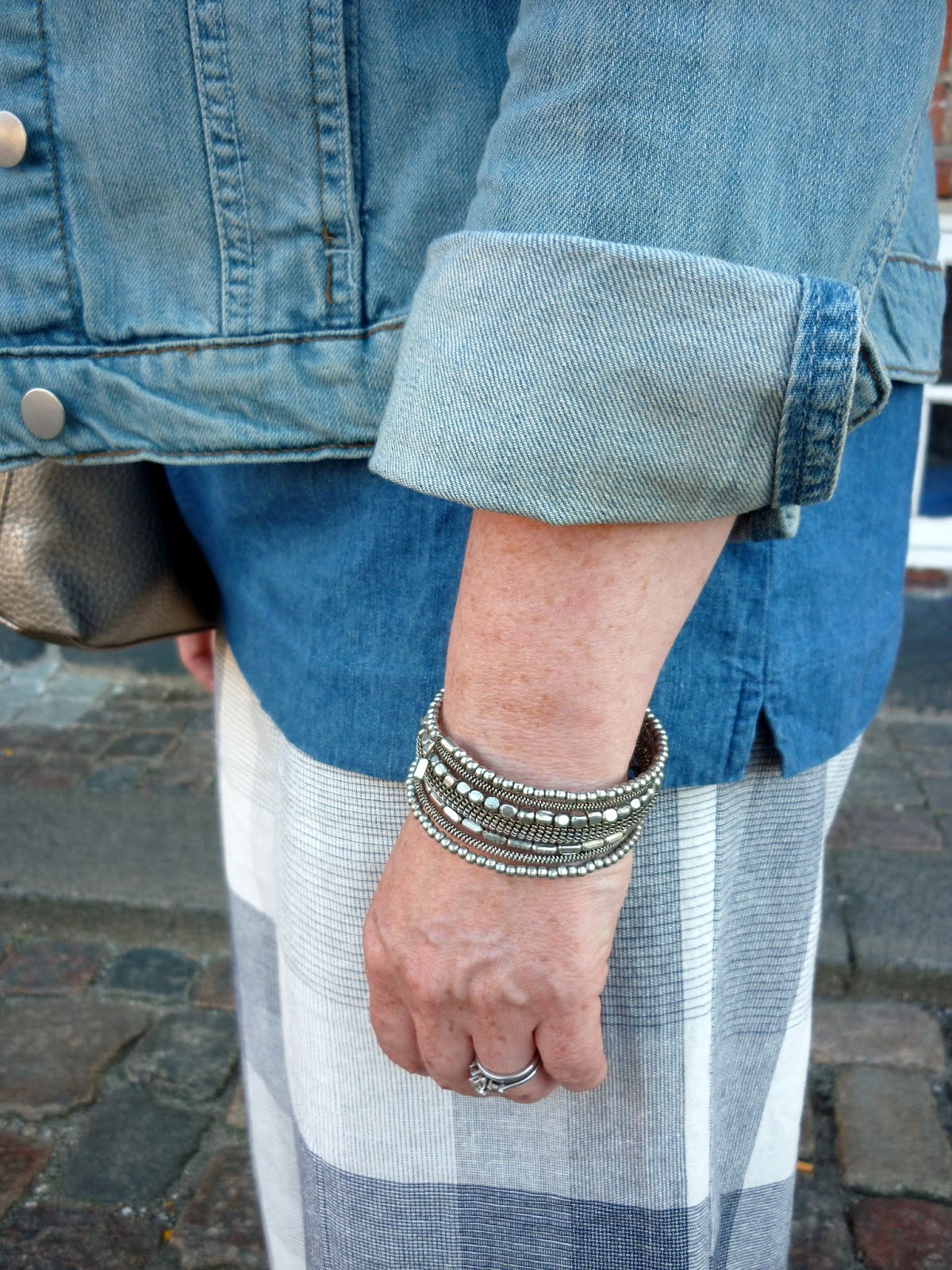 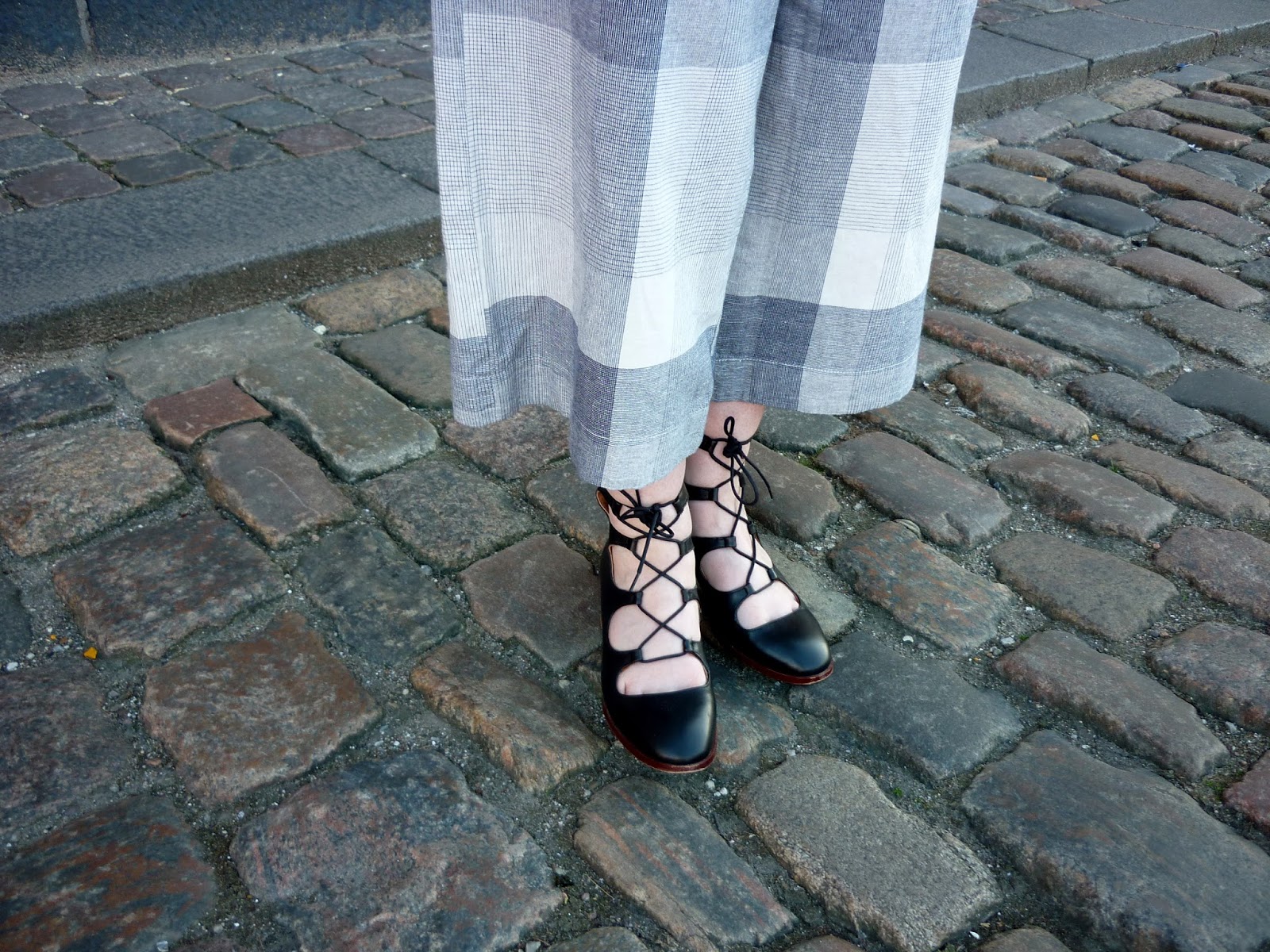 Holidays might be over but my culottes keep on working.

Could these culottes work for smarter occasions I wondered?  Not full on formal but for times when you want to be a little more dressy and a little less ordinary or obvious.

I ordered the tunic dress at the same time as the culottes; not to wear with them at all but simple to try another dress style. However, I wasn’t immediately sold when I put it on.  The culottes caught the corner of my eye lying on the bed, having been tried on moments earlier and couldn’t resist seeing how they paired.  The rest is history, as they say!

British summers are frequently temperamental.  It’s not unusual to still be wearing ankle boots during the summer months.  I opted for grey suede boots so as not to break the colour line of the culottes.

I wanted a finishing touch that wasn’t run of the mill i.e. a necklace.  Culottes and a tunic dress are hardly a run of the mill combination!  The wide dress belt completely lent itself for decoration with a brooch.  After tying, I partially folded the belt over, before pinning the brooch. Once in place, violà; an eye-catching alternative to a statement necklace!

Style Tip: Brooches aren’t just for lapels.  Use them on waistbands, belts, bags even hats.  Co-ordinate any other accessories using similar colours, size and style, even if they don’t exactly match the brooch.

A night at the theatre, an exhibition opening, evening office drinks; I’d happily wear this outfit to any of these.  Pop my invitation in the post please. 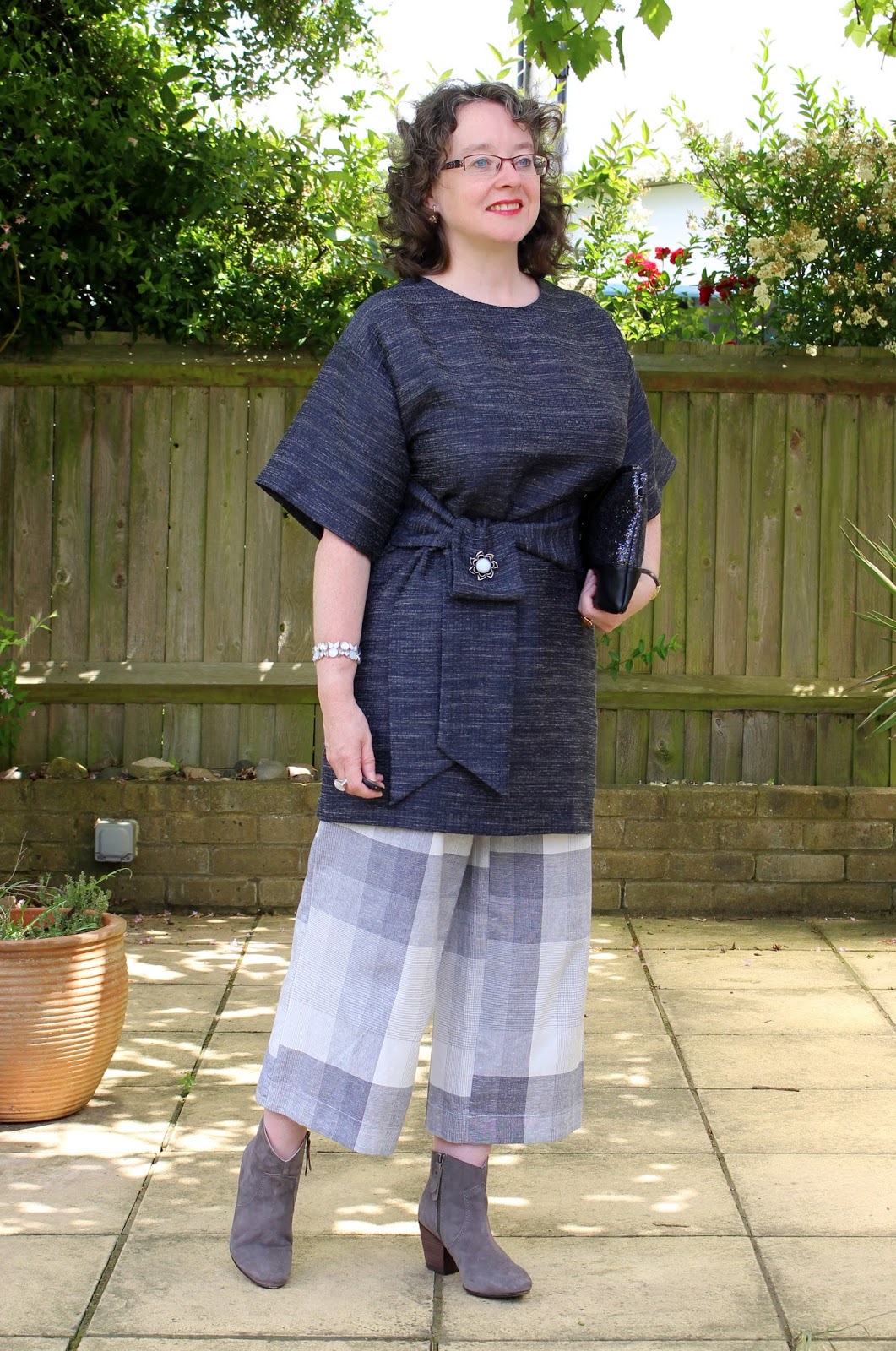 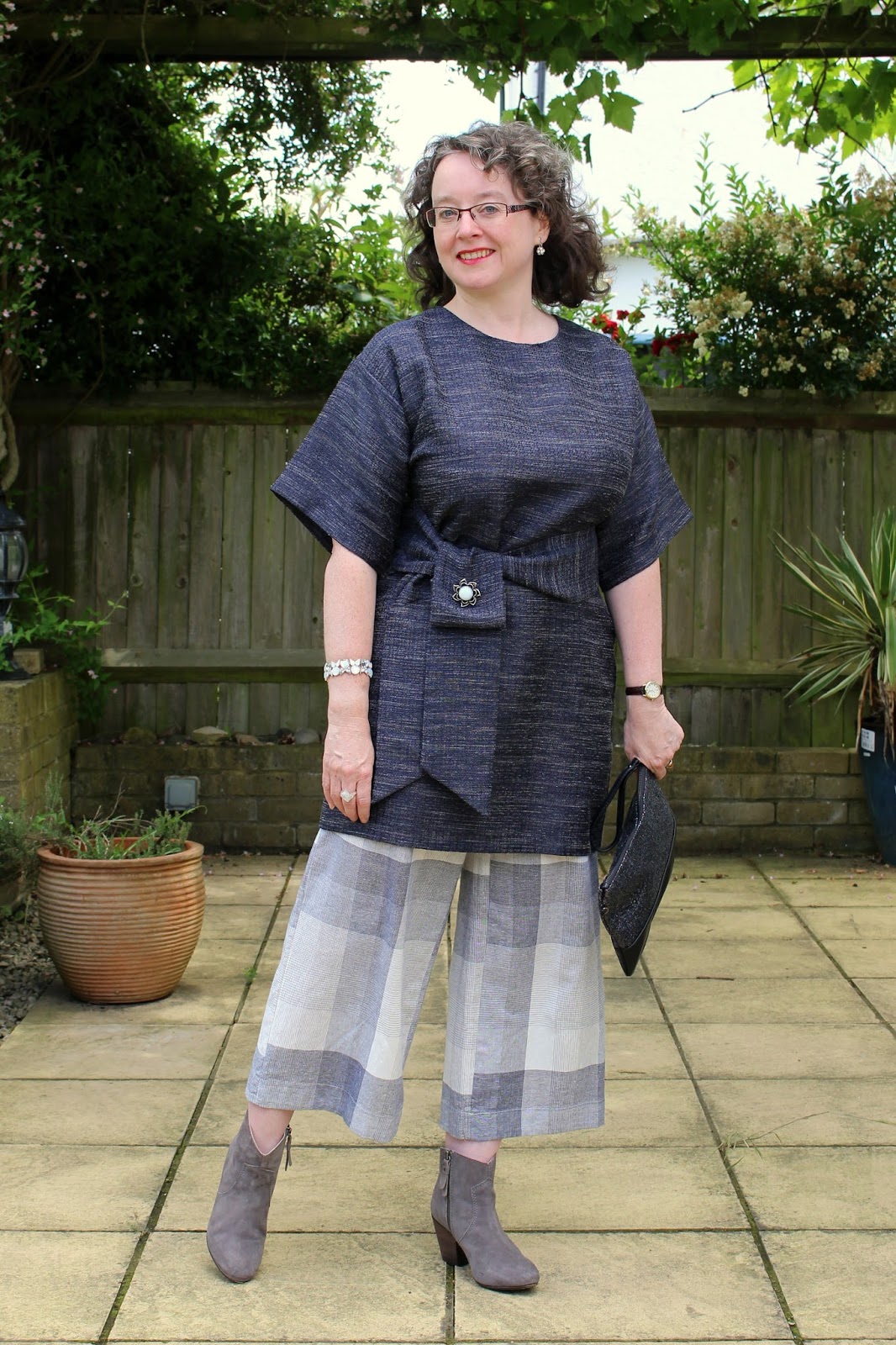 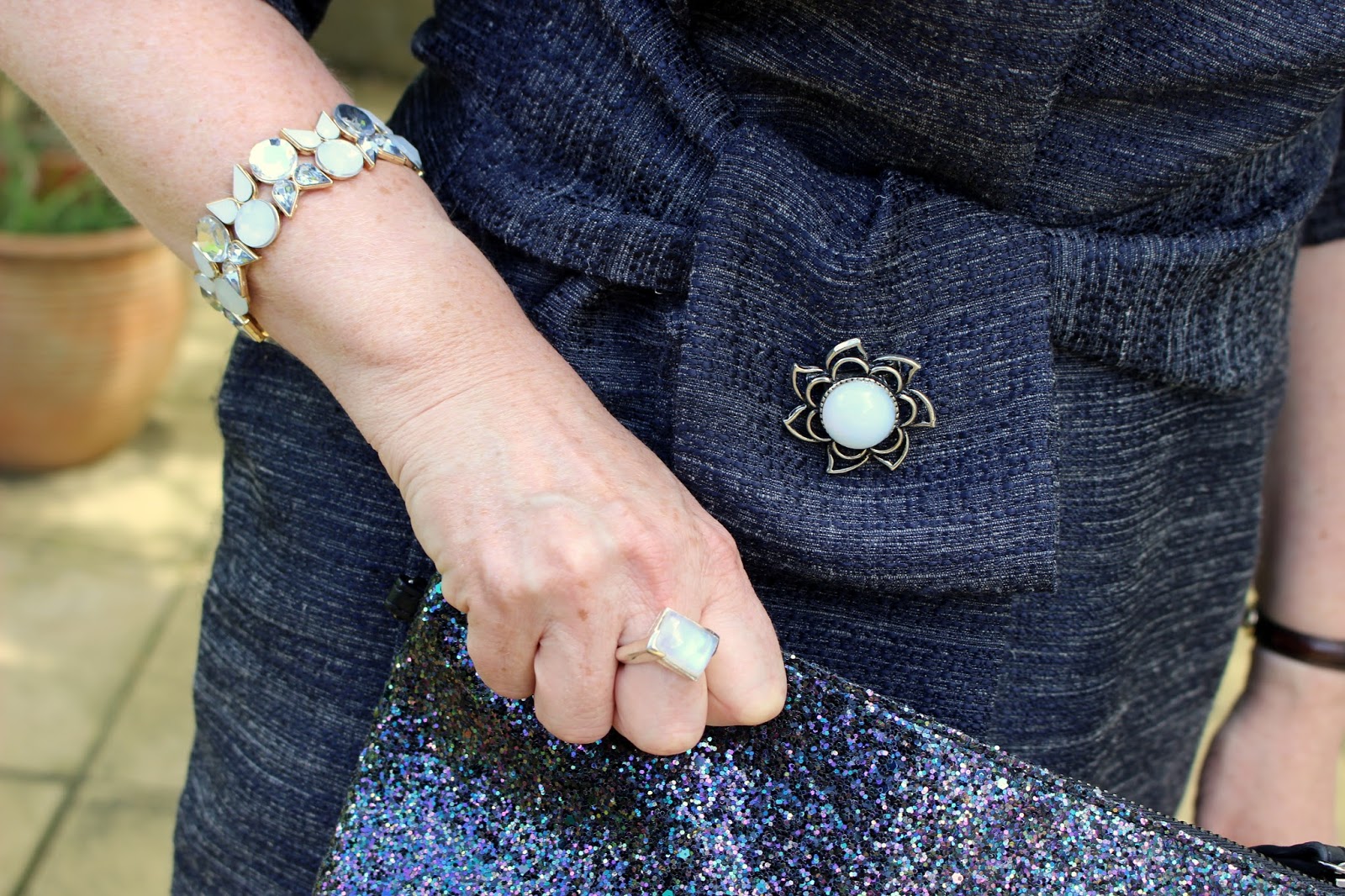 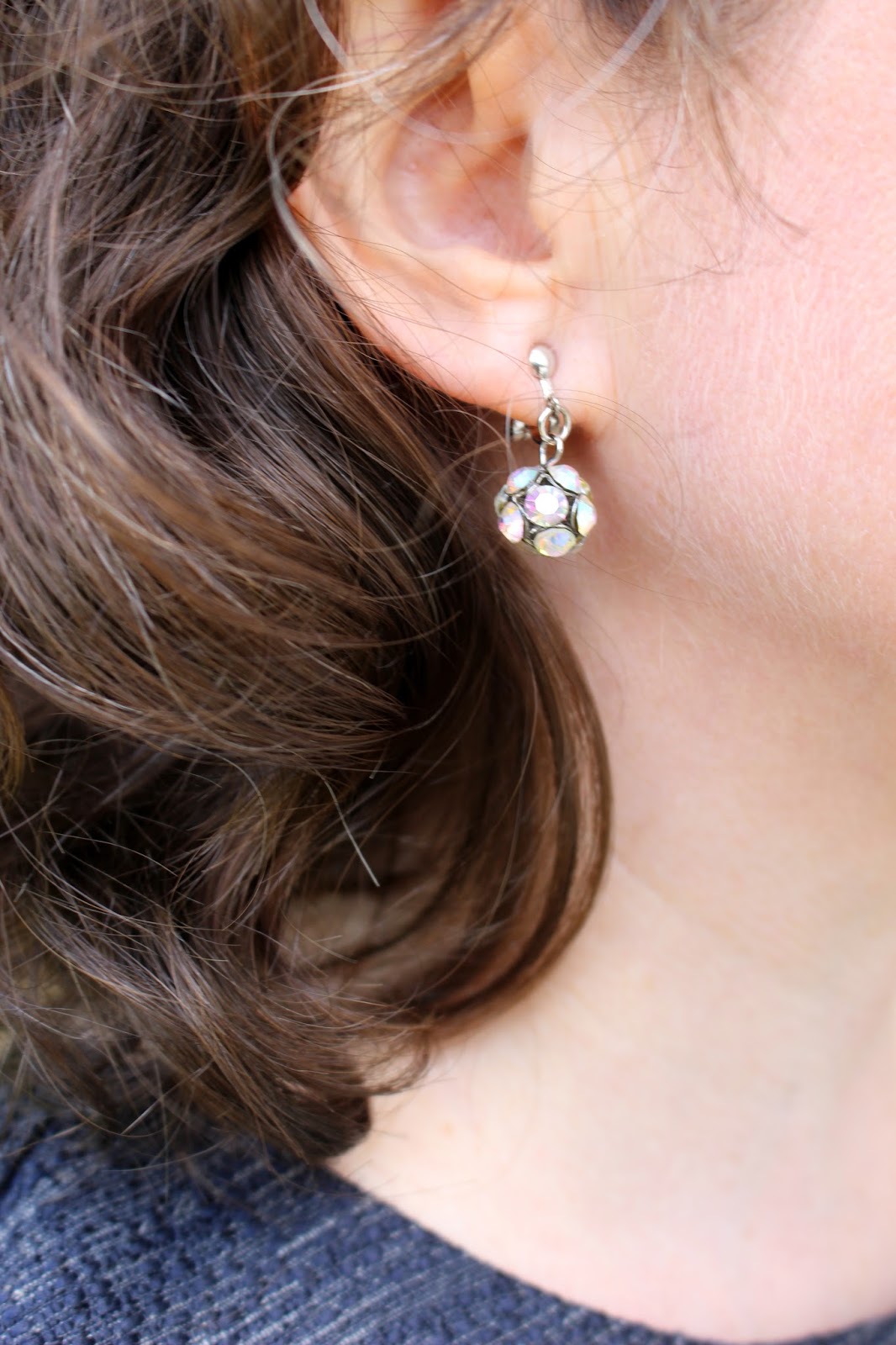 Time for some pattern mixing with an old favourite – polka dots!

Polka dots and stripes work so well together and although the culottes are strictly a check pattern, there’s still enough of a striped effect with the two tone palette of the off white and grey in the culottes, to get away with pairing them with dots.

When pattern mixing, it’s generally a sensible idea to have the same colour present in each pattern to link them, or at least to have the colours in the same tonal palette.

Well, I’ve thrown that one out the window here, haven’t I?  But it still works.  Why?

– By wearing the belt as a tie, I’ve co-ordinated the top and bottom halves of my body.
– The dots of the shirt are small enough that they’re not overwhelming the check, despite the red being the bolder colour.
– Plus red and grey are fabulous together.

Having been inventive with the dress belt in the last outfit, I thought I’d try to do the same with the culotte belt.

Style Tip: when a belt is a soft fabric one, you can wear it either as a tie or as a head band  As I chose a shirt, it was obvious to feature the belt as a tie!  I had to wrap the belt fully once around the collar before making the tie, as otherwise the ends would’ve been dragging down to my knees!  But hey, you wouldn’t have know that unless I told ya!

A snakeskin belt filled the loops where the original belt would have sat.  I like being neat and tidy! 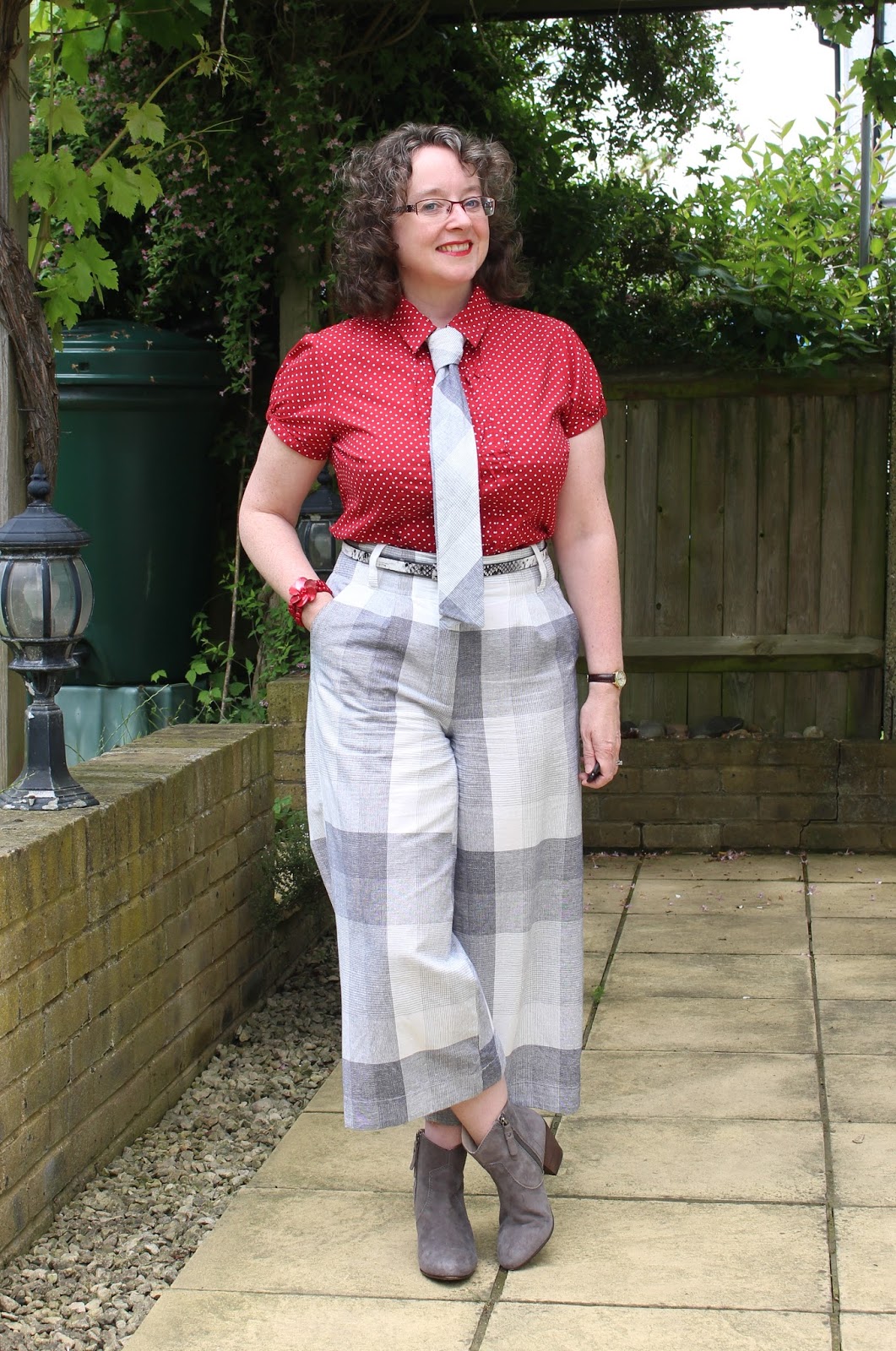 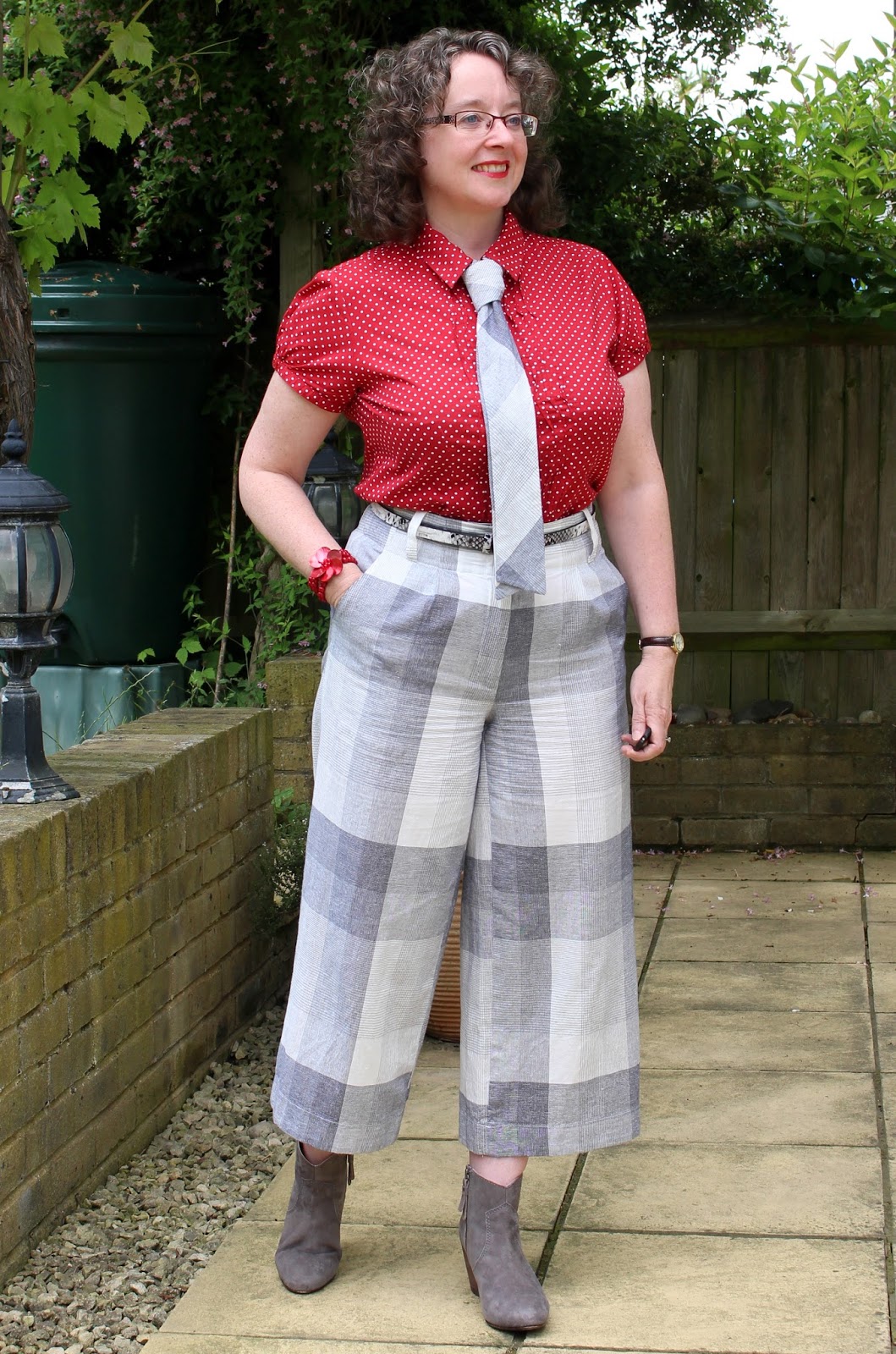 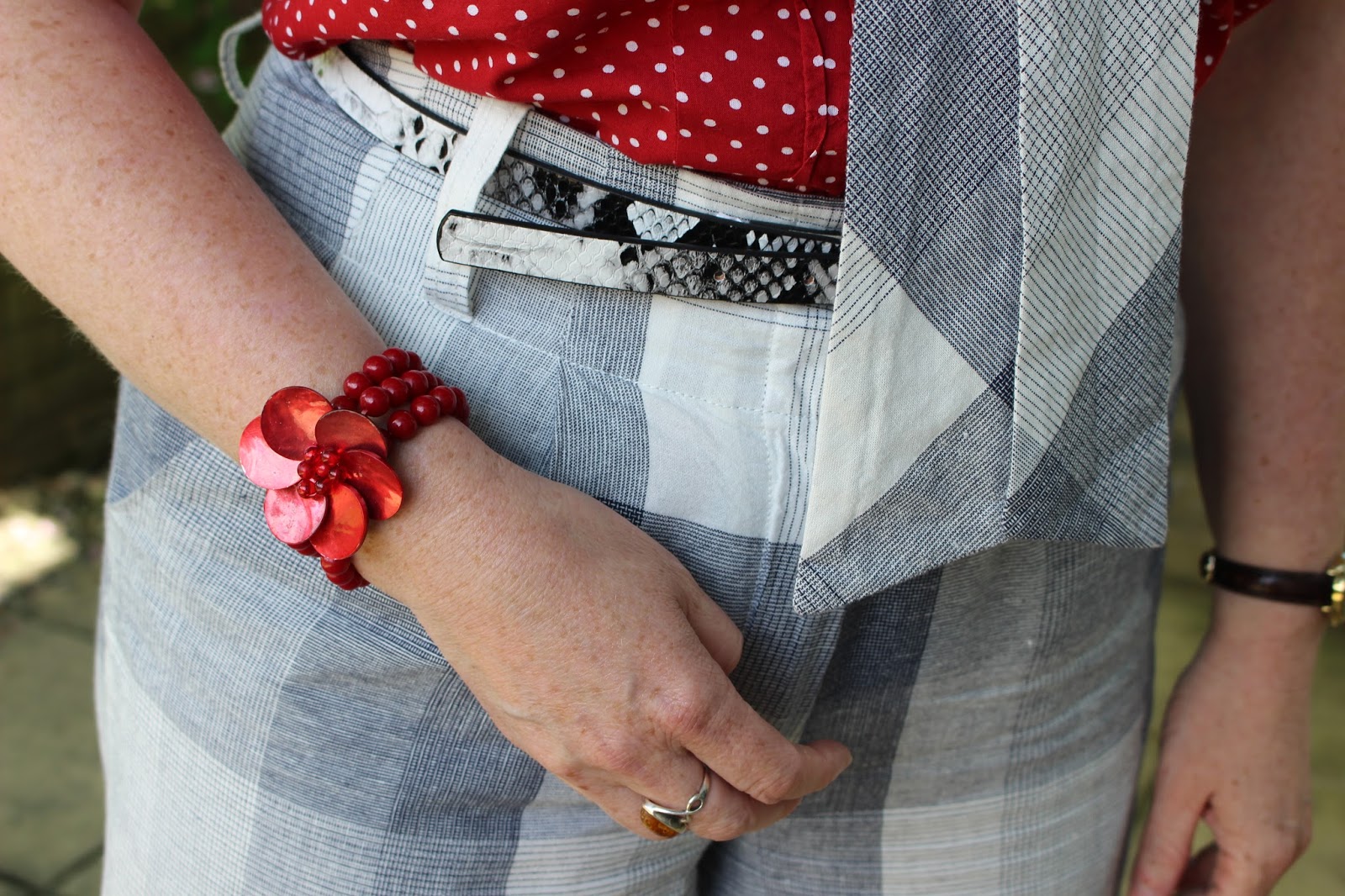 I’m so glad I didn’t settle for second best last year and instead, held out to find the pair I absolutely love and which suits my style.  It can be tempting to fall into the trap of buying something just because it’s the current on trend garment.

– Try on different lengths – just below the knee, mid calf or just above the ankle to see what works best for both your shape, height and proportions.
– Don’t just assume that shorter is better if you’re a petite as it depends on your body ratios.
– Cut and fit vary hugely.  I went for a more tailored, high waisted pair.  Although they are a linen mix so crease slightly, they still hold their shape well.
– Avoid cheap, synthetic type materials.  They won’t hang well on your body, can cling even when it’s not hot and can show every lump and bump.
– Avoid inside leg pleats and/or front waistband pleats (unless you are an inverted triangle with narrow hips and want to balance them out with your shoulders).  They will add volume especially if the culottes are cut to flare out.
– Elasticated waists add bulk around the middle.  Choose ones with a proper waistband. 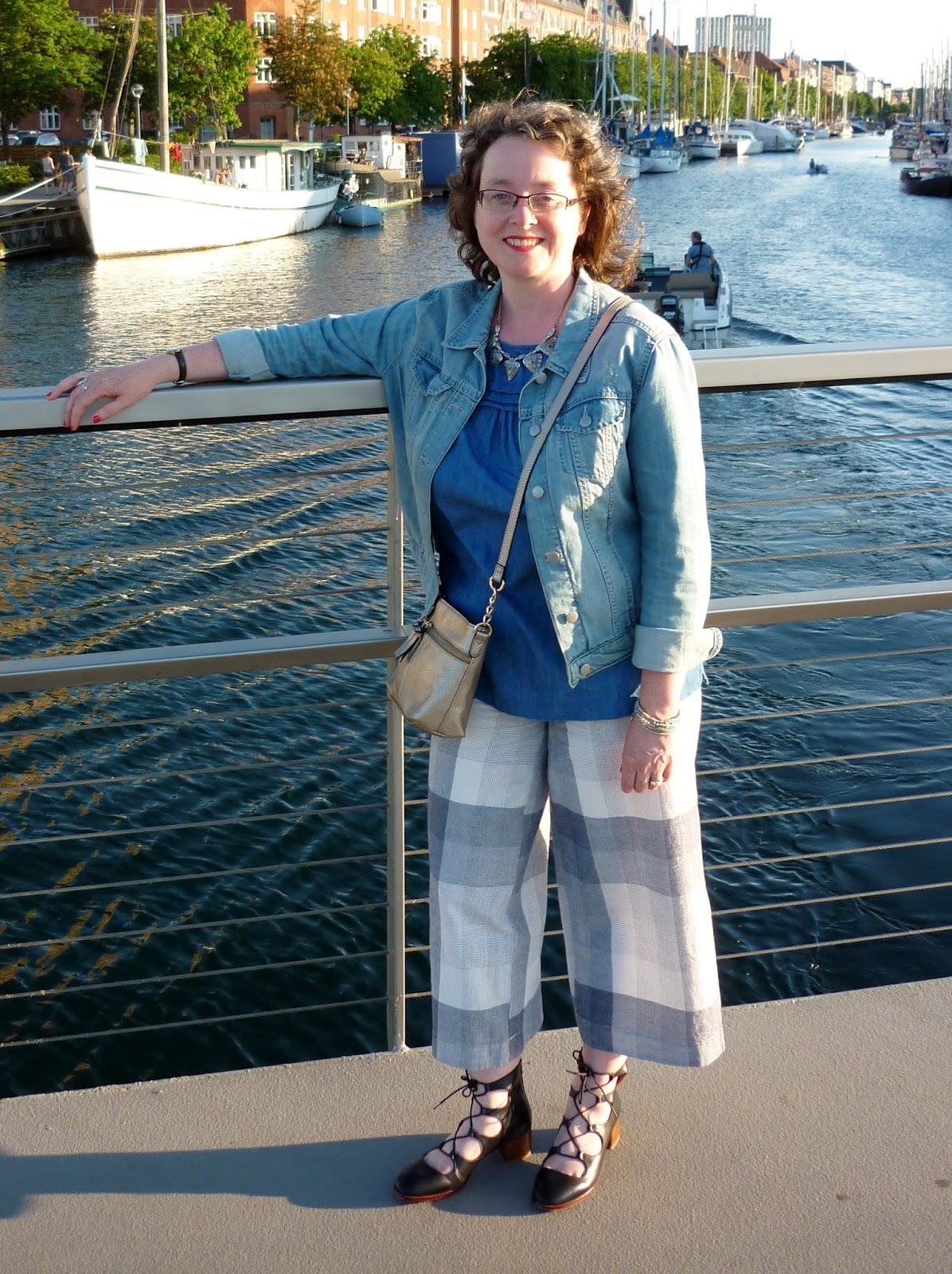 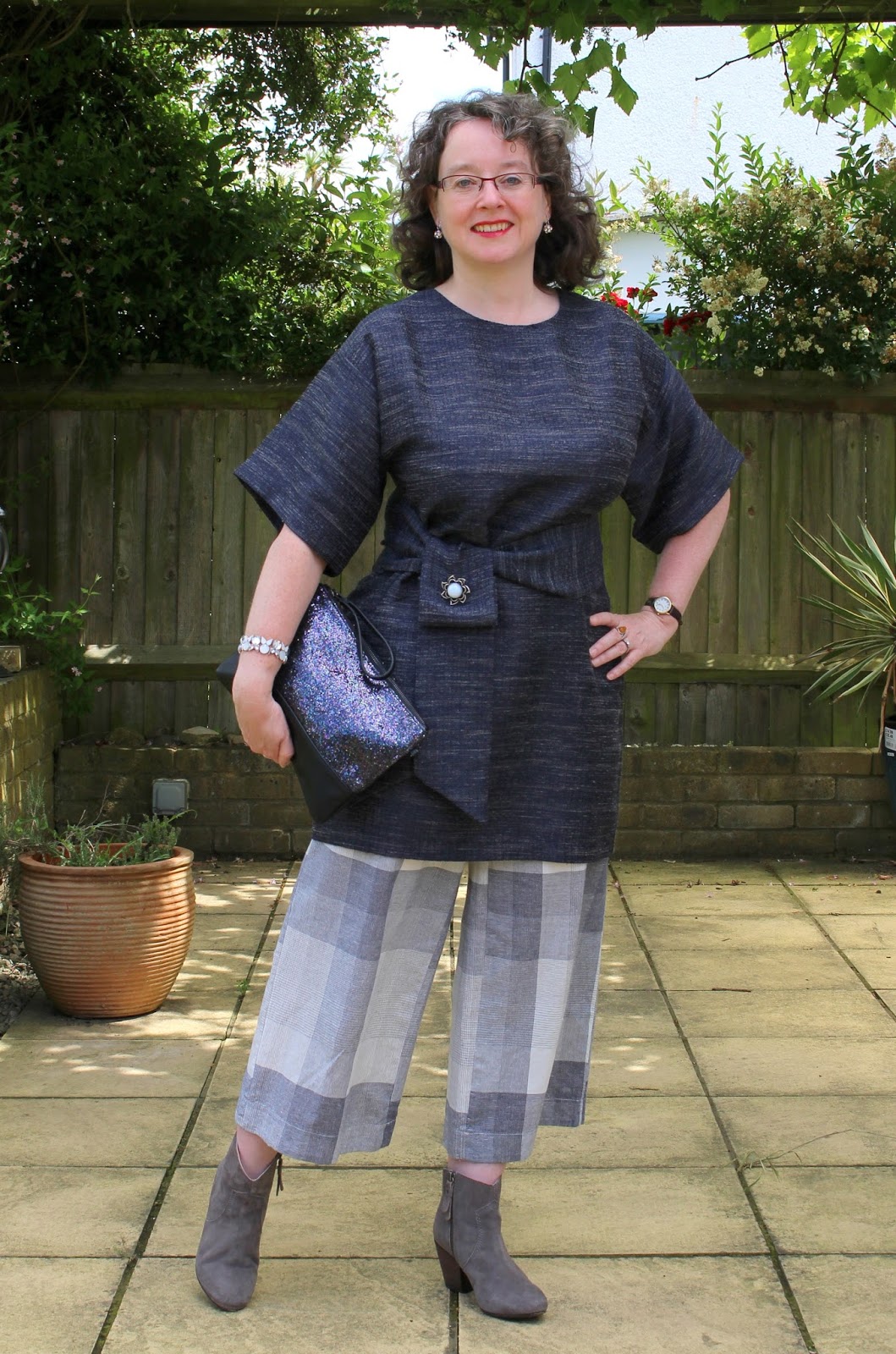 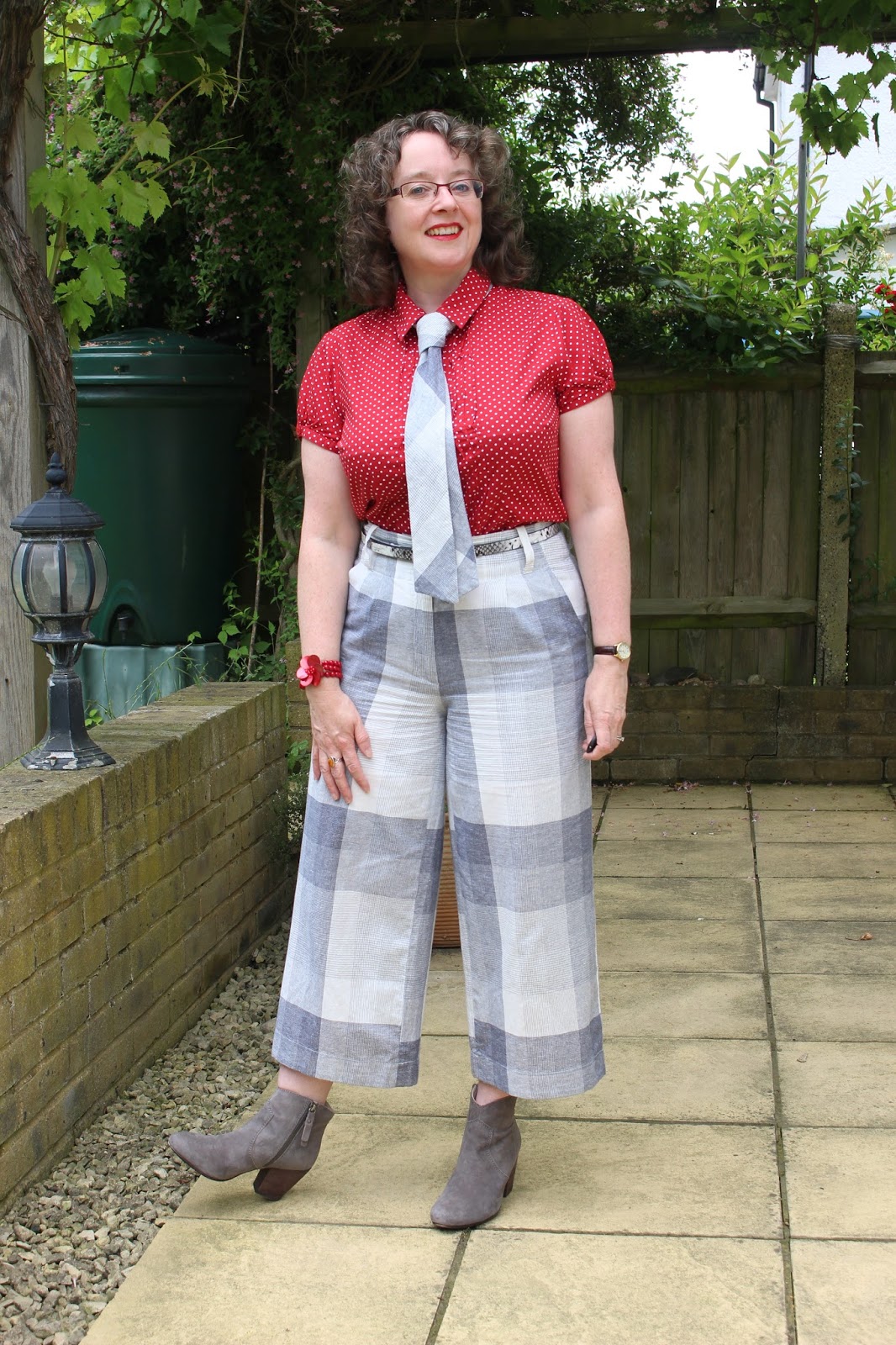 Have you embrace the culotte trend?  And which look of mine is your favourite?