‘Men put me down as the best woman painter……

I think I’m one of the best painters.’

So sayeth one of the great painters of the 20th century.  Georgia O’Keeffe was one kick ass lady! She knew she wanted to be an artist before she was 12 years old. 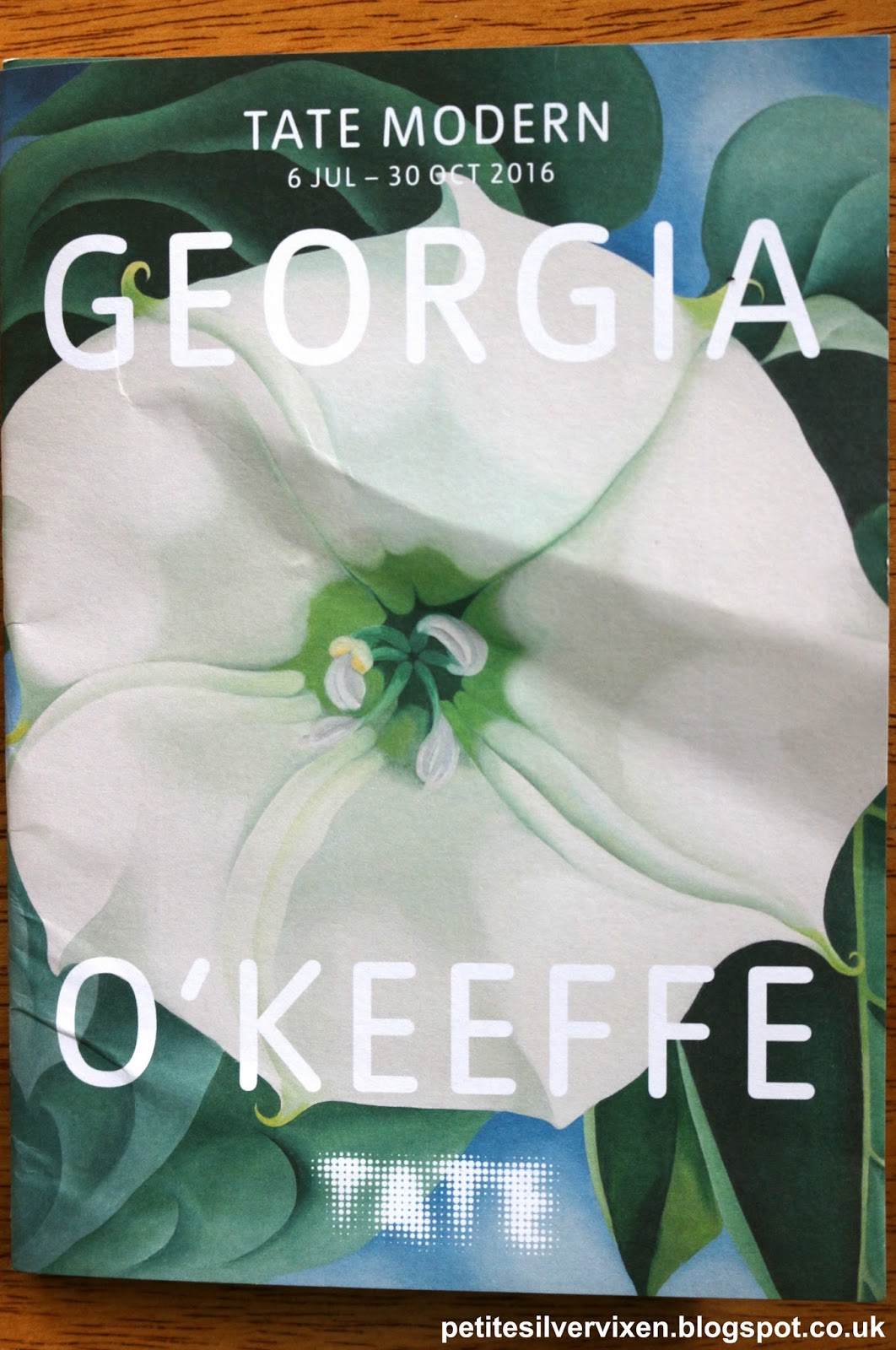 Her first major exhibition was in New York in 1916 so it’s fitting that a century later, we’re celebrating her work.  Tate Modern’s blockbuster of a summer exhibition brings over 100 of her paintings together, spread over 13 rooms.  And living so close to the capital as I do, I was champing at the bit to see this exhibition.

As an art lover, I of course knew about her and knew her work but until a couple of Sundays ago, I realised I only really knew a tiny fraction of her work – her famous and infamous flower paintings. I didn’t know how much she railed (quite rightly) against being seen as a ‘female’ painter and railed even more against the misinterpretation of said flower paintings, as having sexual meaning.  I mean how reductive a view is that simply because you’re looking at a flower close up?  And how insulting to the artist when the artist has clearly stated what her intention was behind her flower paintings:

That’s the joy of going to exhibitions; discovering new and unexpected things, of which this exhibition delivers in spades.

But before we go on a journey through her work, allow me to take you on a pre-exhibition journey through Bankside, the area where Tate Modern is.  We decided to make a day of it starting with brunch at the Albion – part café/restaurant, part shop. 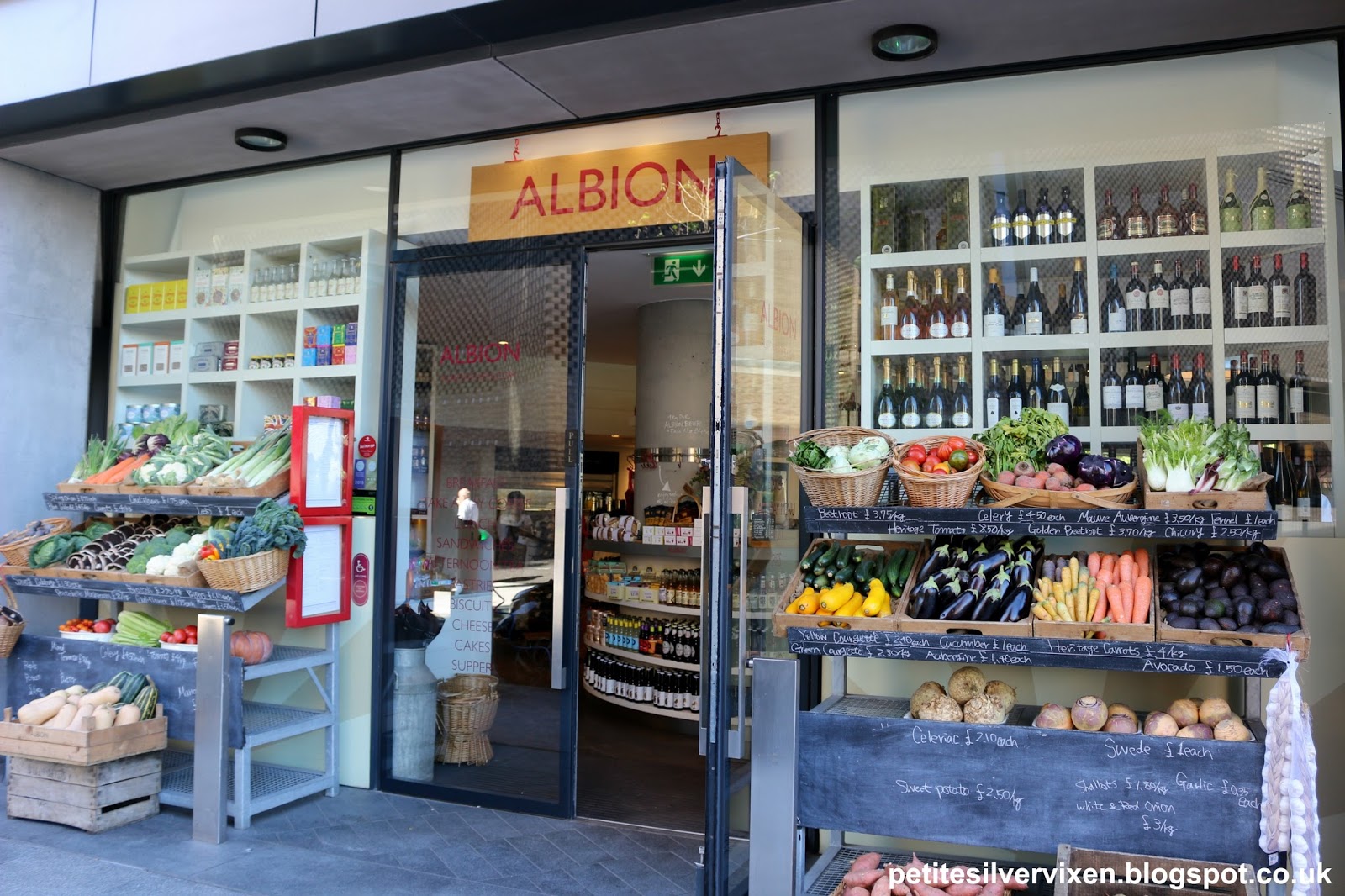 Tall Brown Fox and I shared their meat platter for two with the biggest curl of pork crackling I’ve ever seen perched on top! And mighty fine crackling it was too.

We munched our way through two kinds of ham, beef, chorizo, salamis, meat paté, chutney, red onions and a scotch egg. Being as much an unashamed foodie as I am culture vulture, I would’ve preferred a whole or at least a half scotch egg to the quarter on the platter, simply because it was so tasty and sharing a quarter between two foodies is a little fiddly! 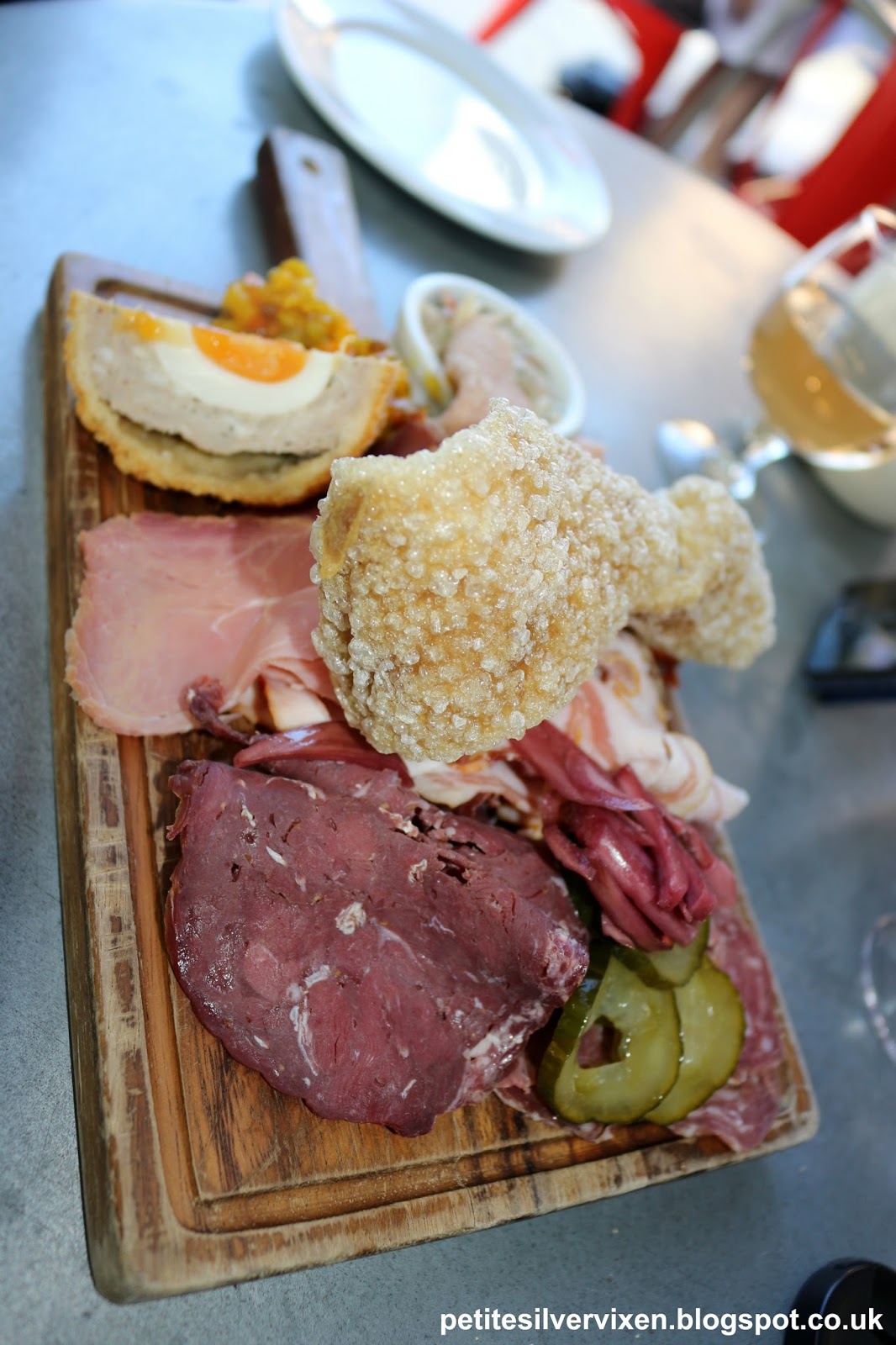 With it being a beautiful, bright sunny day, we couldn’t pass on eating en plein air.  All the better to appreciate the new Tate extension, literally across the road from where we were sitting. 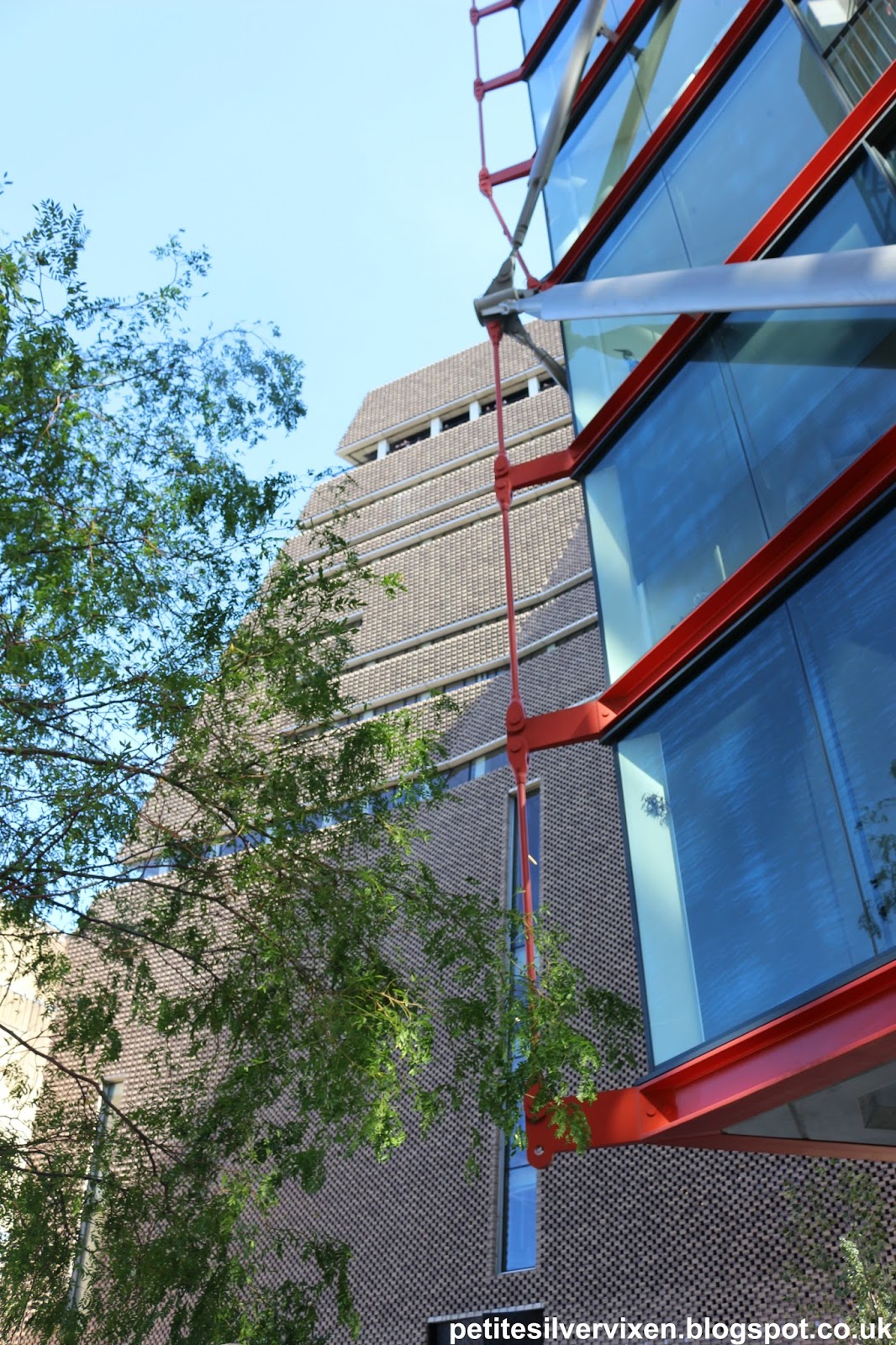 The South Bank by the gallery is a far cry from what it was even 10 years ago.  Lots of expensive flats and new office buildings popping up.  I’m not so sure I’d want to live in such a fish tank.  I’m sure the views from the flats higher up are great but the downside is, your space is on show!

I hope the teddy bear is enjoying the view! 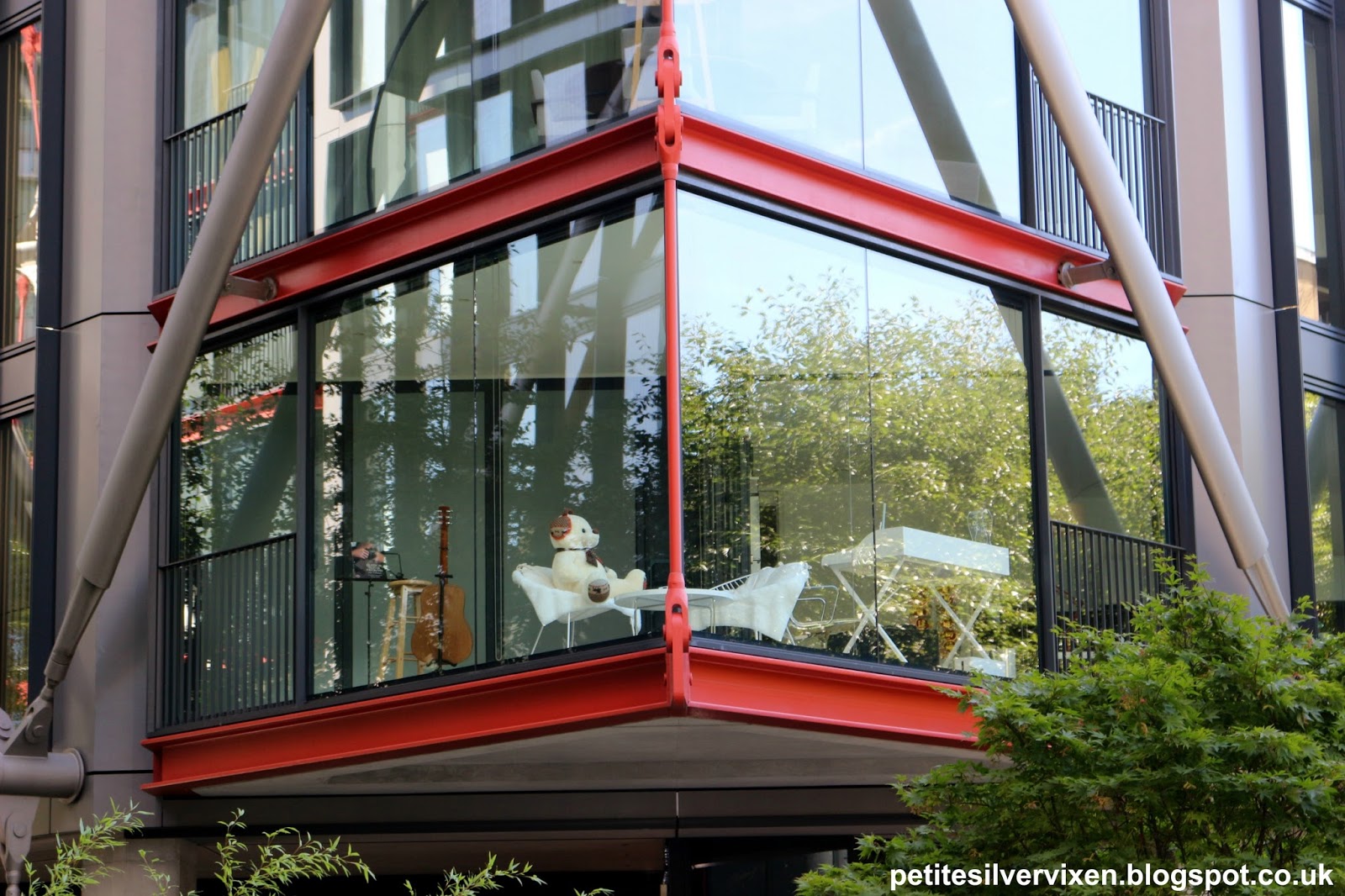 It’s an interesting area to wander around and you have the benefit of being either riverside or within spitting distance of the Thames. Sprinkled around the NEO Bankside development are various striking stone sculptures by Emily Young.

They certainly set the right mood for what was to come. 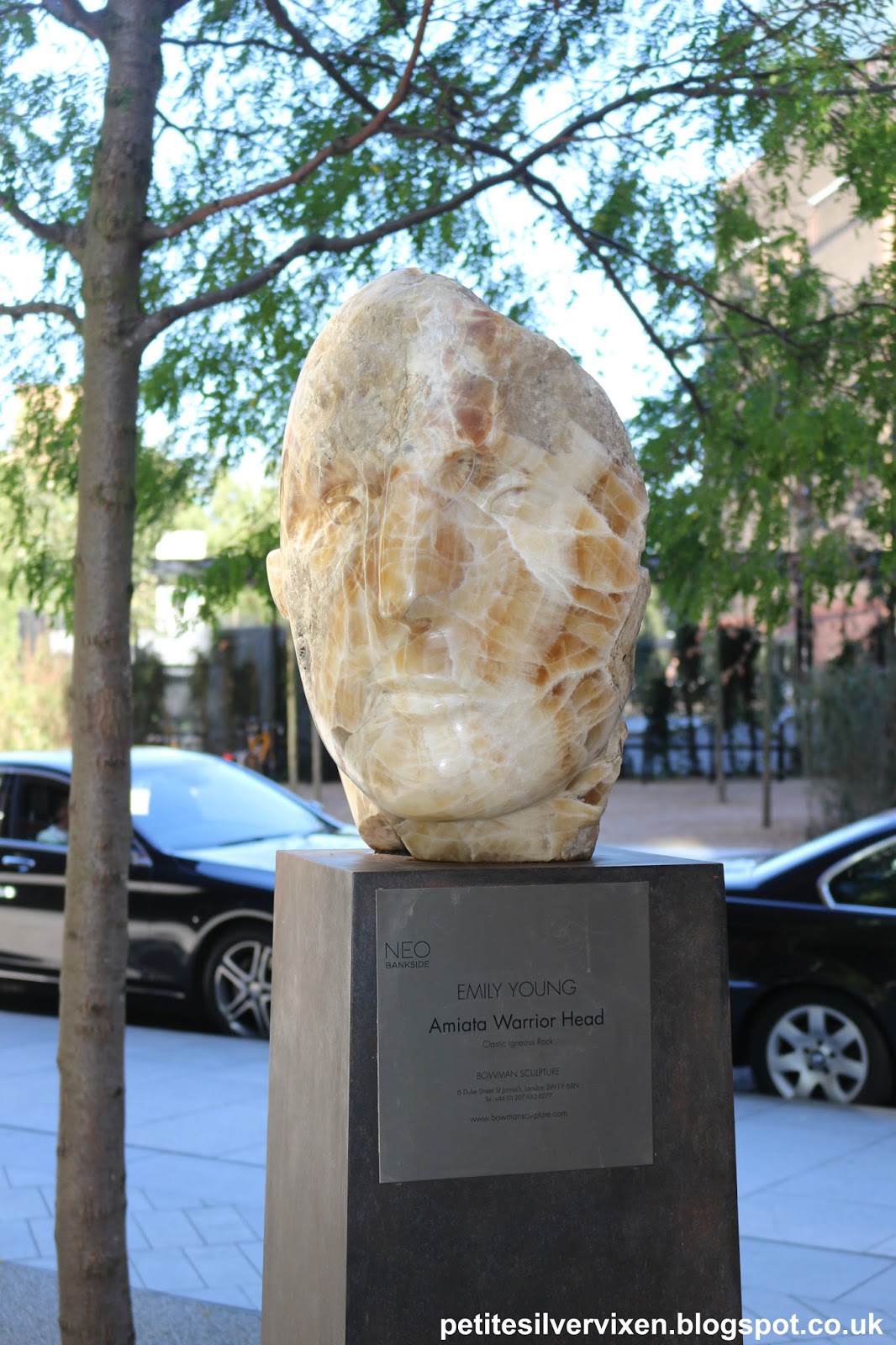 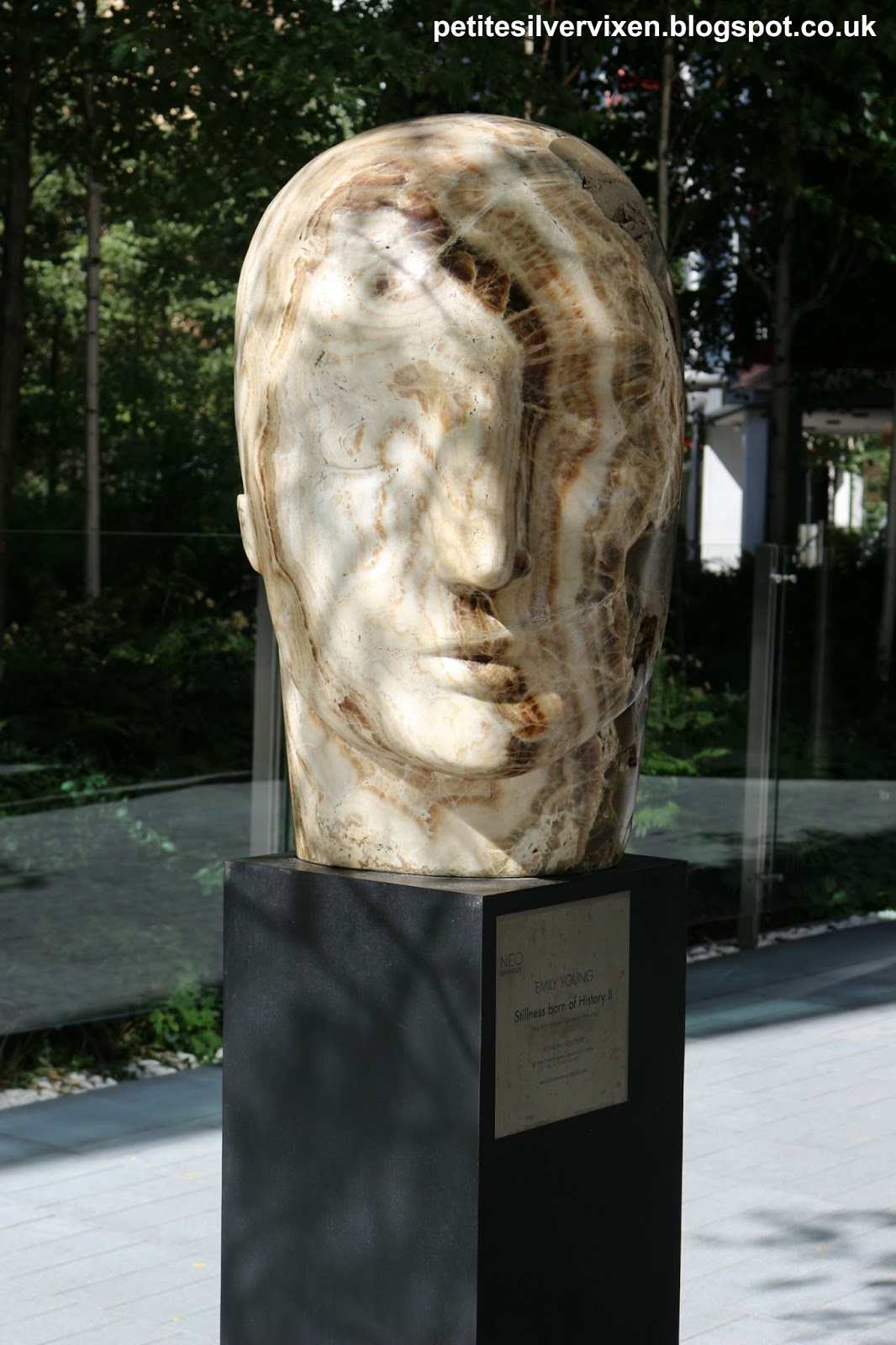 Fortified by our carnivore lunch, it was time to get up close and personal with the Switch House. Tate Modern was originally a power station and is now composed of two, connecting buildings, their names reflecting their industrial past.  The main gallery – the Boiler House – is the old power station which includes the vast Turbine Hall.  The new extension is the Switch House.

We purposely chose to go in through this entrance rather than the main riverside one and you certainly appreciate the pyramid design from this side.  This brick ziggurat rises 10 stories high.  The extension has been done very sympathetically and I particularly liked the external facade of the brickwork pattern.  Very in keeping with its older, neighbouring building. 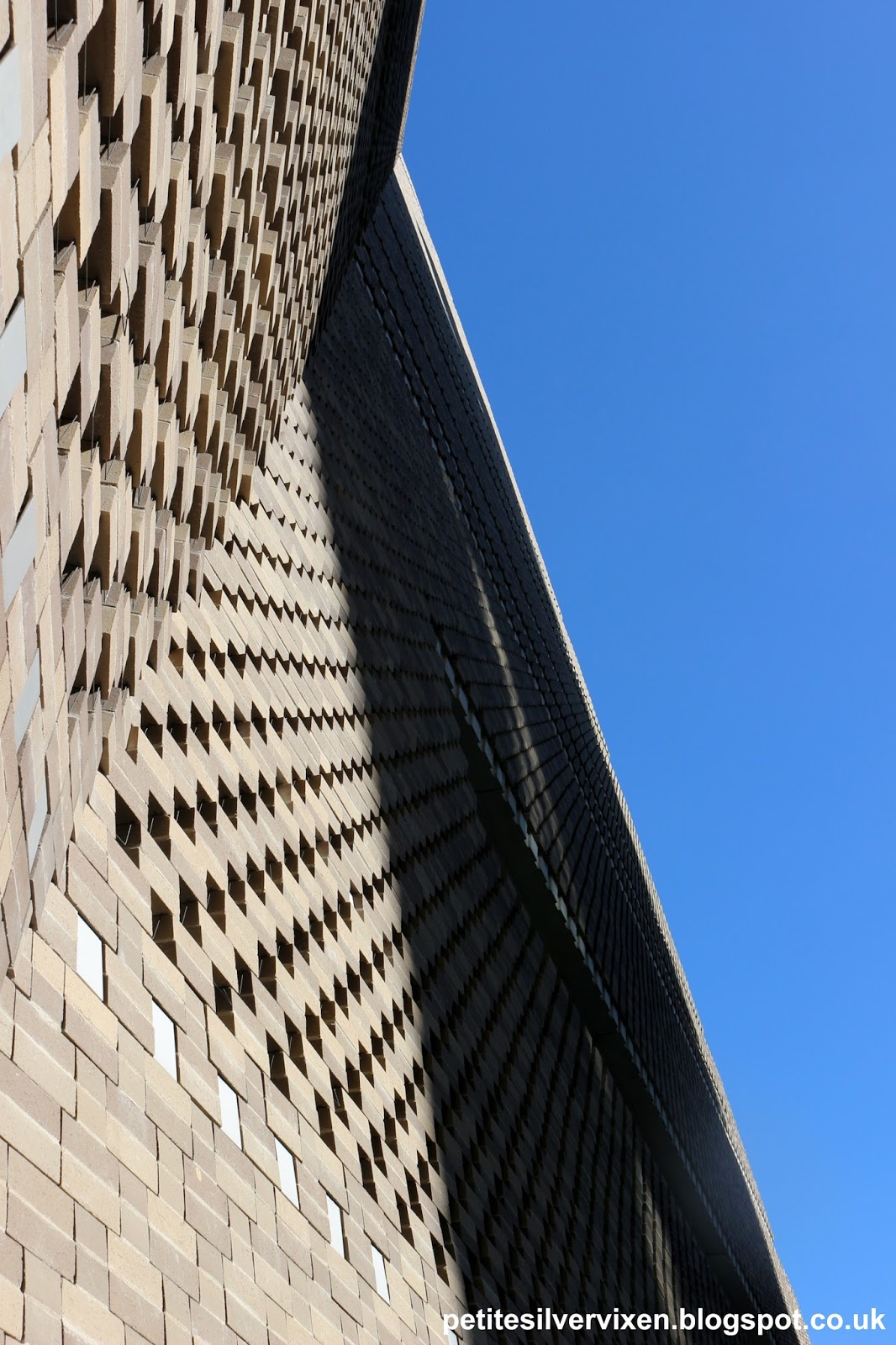 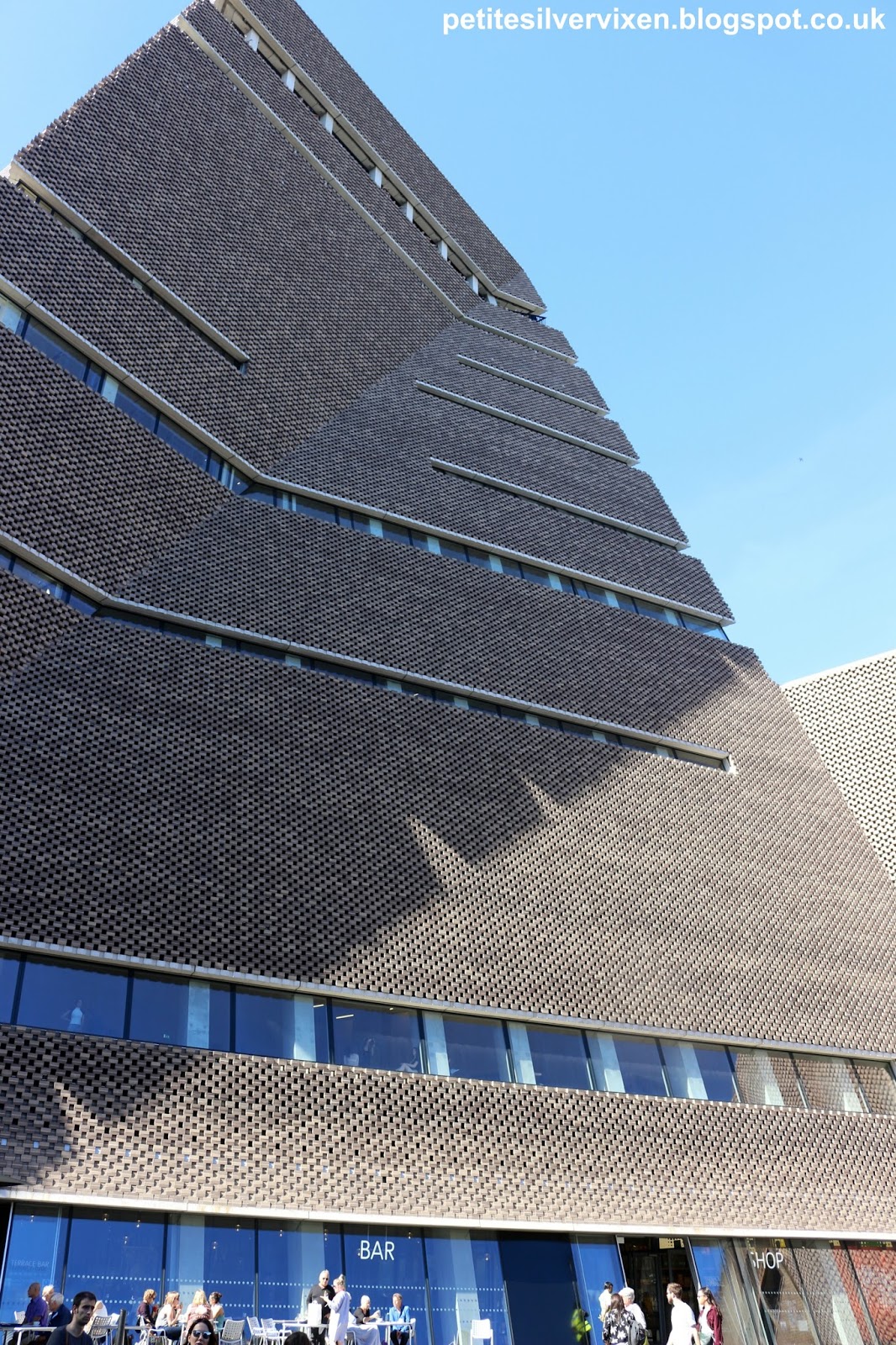 ‘A once-in-a-generation chance to explore a figure entirely absent from British collections.’

With a review like that, you’d be foolish to miss up this chance to enjoy an artist whose body of work spanned over 7 decades.

A quick snap before we went in! 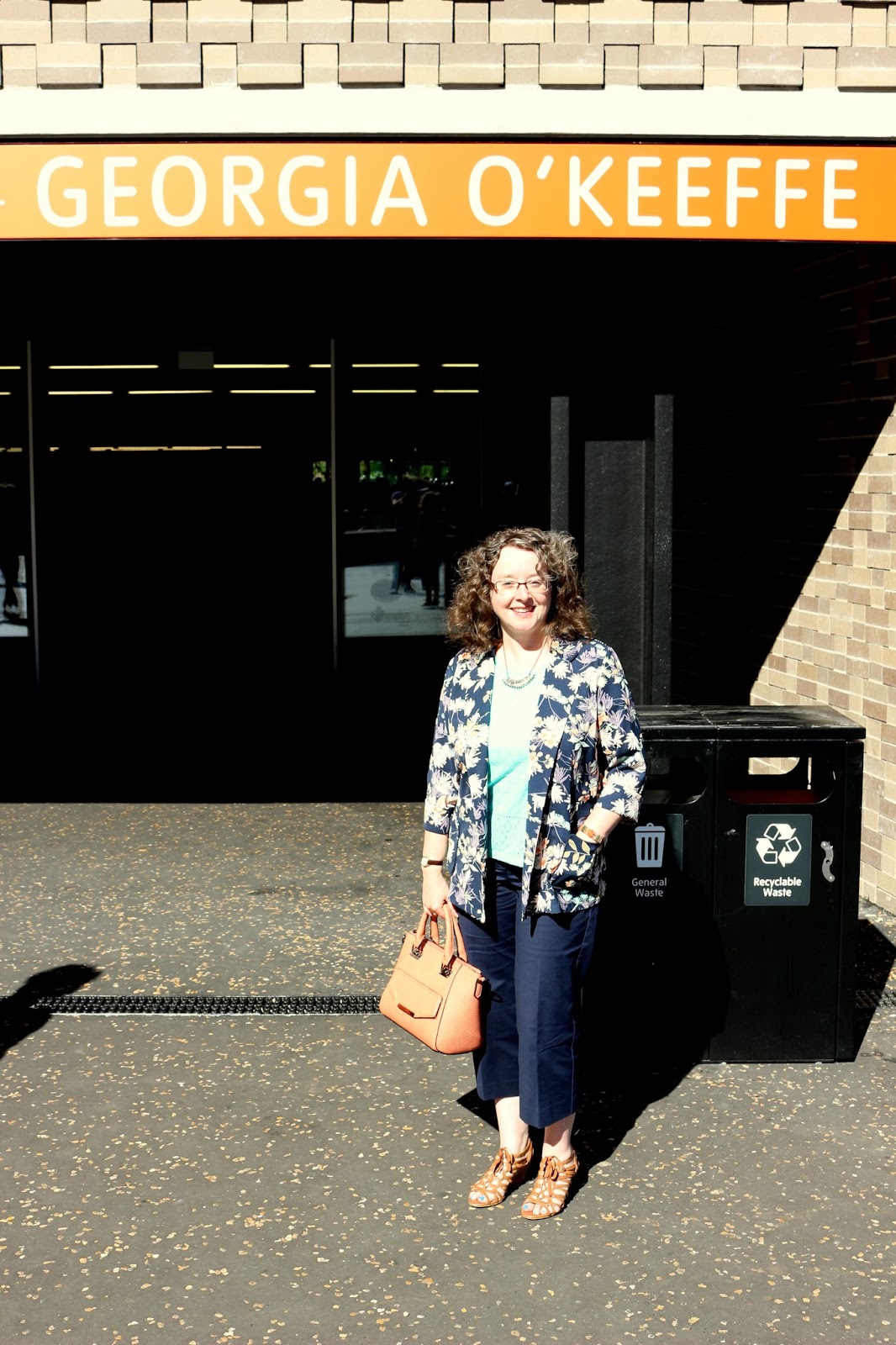 – It’s worth buying the audio guide.  It’s just under £5 which is on the pricey side I feel for exhibition audio guides so Tall Brown Fox and I shared one between us.  The unexpected benefit of having the guide was that you actually get to hear Georgia speak about her work from old recordings, as well as insights from the curators of the exhibition.

– Allow about 2 hours if you really want to absorb it all at a leisurely pace. It’s a popular exhibition so sometimes we had to wait a couple of minutes to be able to stand right in front of paintings we were really interested in.

– Wear comfortable shoes.  Only some of the rooms have central benches in them to sit on.

– Or opt to take one of the folding stools provided at the entrance to the exhibition.  Then you’ll have your own portable seat!

I had to have a photo taken of me standing next to the exhibition poster at the entrance to the gallery. It depicts probably one of her most well known paintings – Jimson Weed/White Flower No. 1, painted in 1932.

It was completely by chance that I happened to be channeling my inner Georgia O’Keeffe by wearing colours so in tune with the poster – teal, navy – plus a floral blazer! 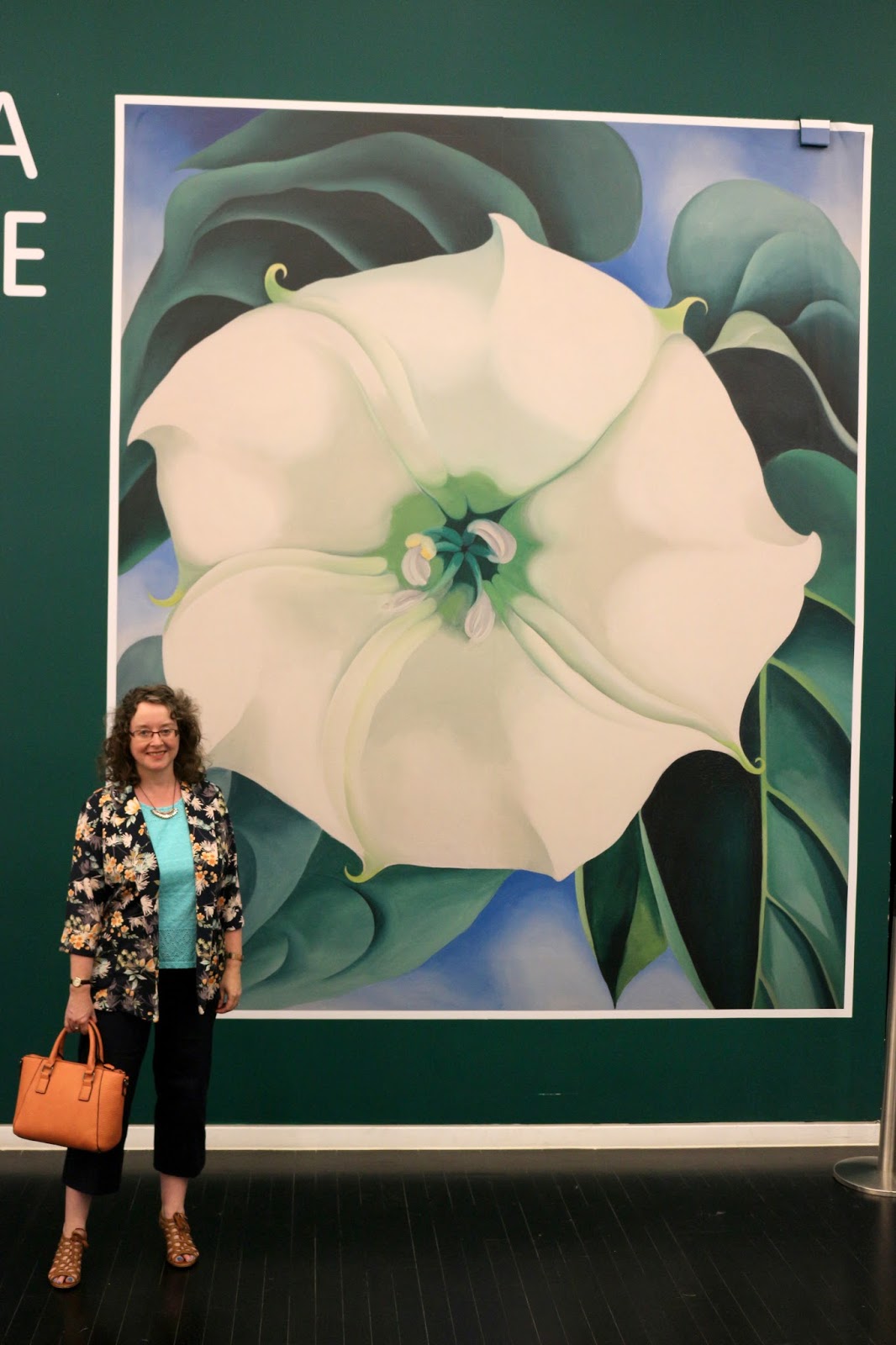 ‘I found I could say things with color and shapes that I couldn’t say any other way – things I had no words for.’

One criticism often levelled at O’Keeffe is how photographic her work was.  Yes, she was influenced by photography – her husband, Alfred Stieglitz, was one after all.  She was also friends with Ansel Adams – another unexpected, delightful nugget I learned. Yes, a delight as he’s one of my favourite photographers!  There are a few of his and Stieglitz’s photographs in the exhibition, along with copies of books and a sketch book of Georgia’s.  I love it when personal items are included.

Her paint is smooth and utterly flat to the canvas, unlike the oil paintings say of Dutch masters where up close, you can literally see the oils rising off the canvas in ripples.  But there is incredible depth to the paintings through perspective and use of colours.

Obviously no photography is allowed once inside the exhibition.  To give you a flavour of what we viewed, here are 2 works from the exhibition that really resonated with me.

By 1919 Georgia had moved from Texas to New York.  Many of her paintings from this time reflect how she wanted to try and capture some of the sights and sounds of her time from living in a place so different to the city.  She was fascinated by the spectacular Texan storms she saw, and when she went on night time walks, how noises coming out of the dark such as cattle lowing or train whistles, would apparently evoke certain shapes and colours.

Works from this period clearly show she understood and had an interest in synesthesia and in particular, chromesthesia, which is a sound-to-colour form of synesthesia.

For me, this was the most striking and breathing piece in the exhibition. 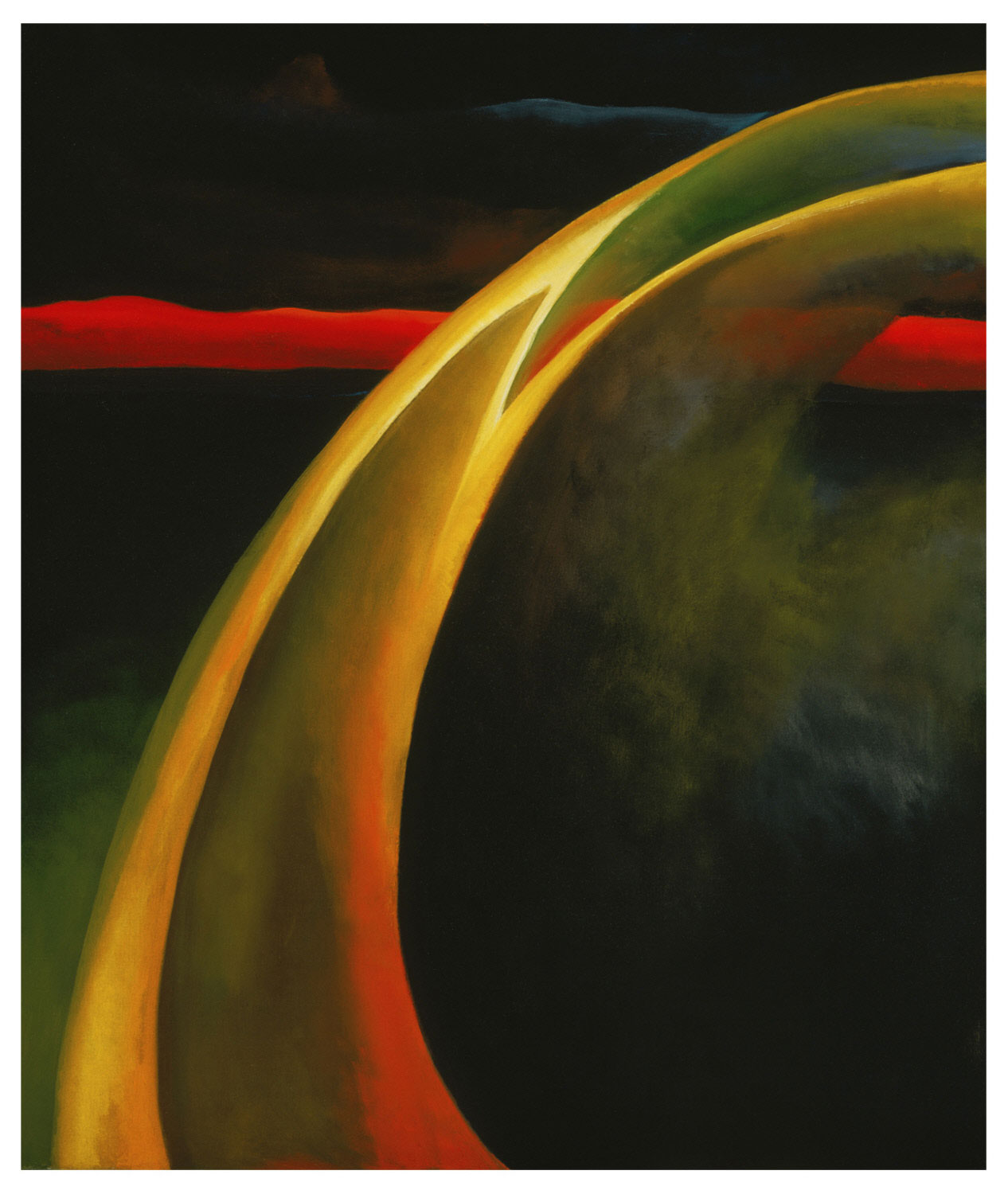 Georgia and Alfred had a summer house at Lake George, in upstate New York.  As with her New York City paintings, it was clear how much she thrived not only the environment around her, but on the palette that that environment gave her.

Georgia was a master of colour graduation.  At first glance this painting looks dark and incomprehensible.  But look closer and you’ll see extraordinary shades and tones of colour that swirl, merge and seep into each other.  Grey, indigo, purple, mulberry, teal, yellow, aqua, all atmospherically indicating stormy weather over Lake George in abstract form. 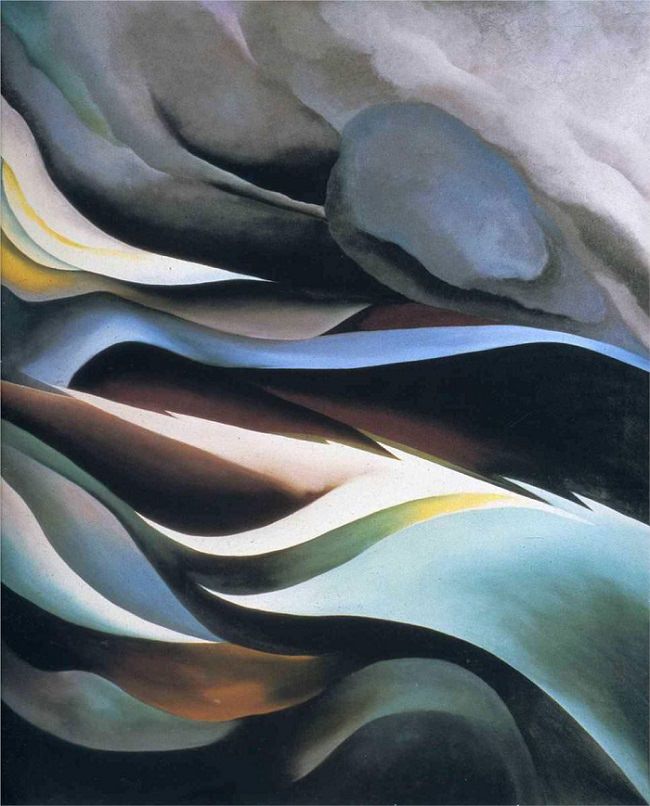 Another landscape that informed her work was that of the South West.  You really can feel the expanse of the sky, the aridity of the earth and rocks.

I loved seeing her interpretations of a landscape that clearly meant so much to her but which is so unfamiliar to me. 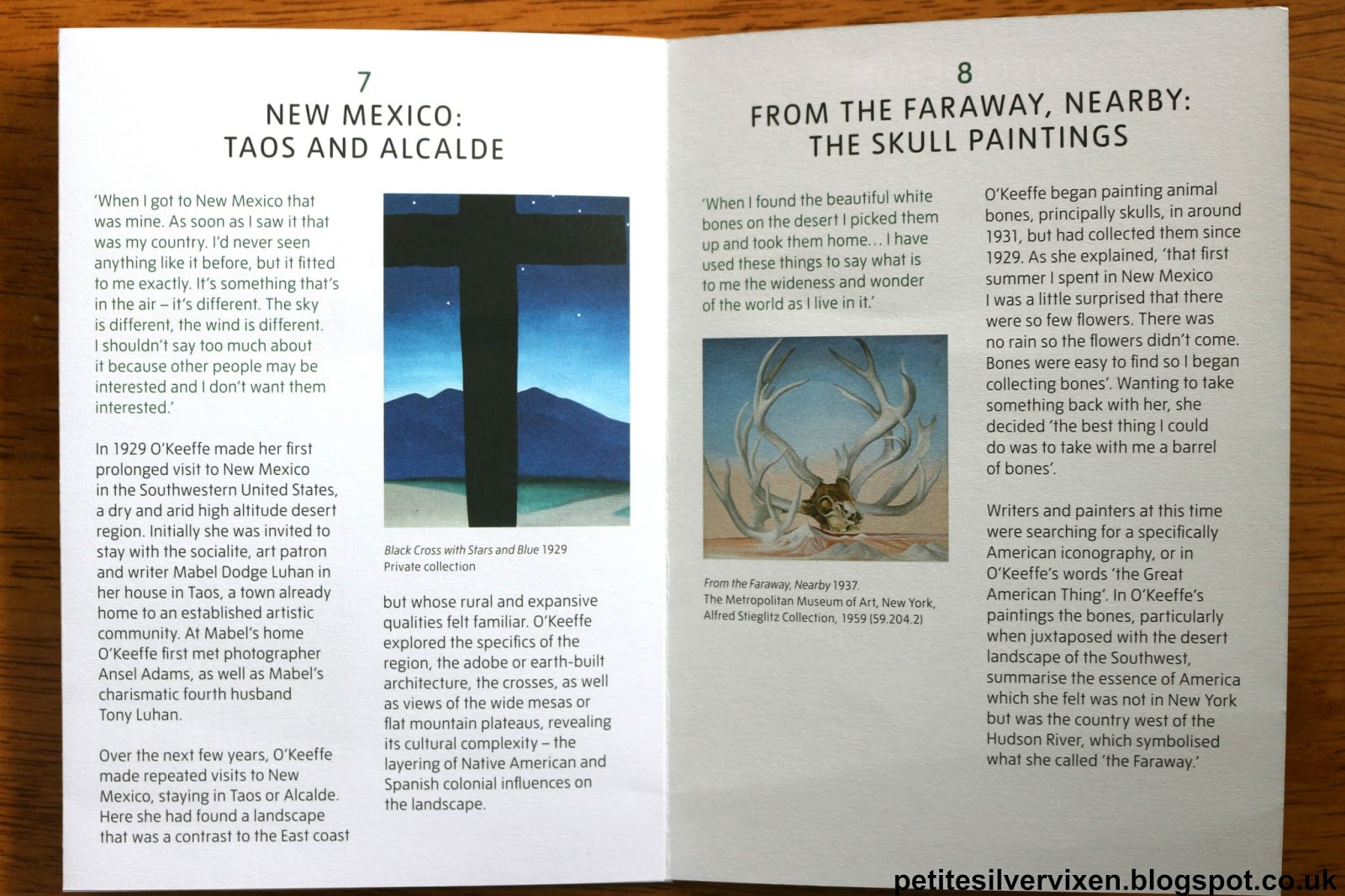 The exhibition shop is an O’Keeffe buyers delight!

I didn’t buy anything as I haven’t put up yet some of the prints from the numerous other exhibitions I’ve been too!  But I was tempted! 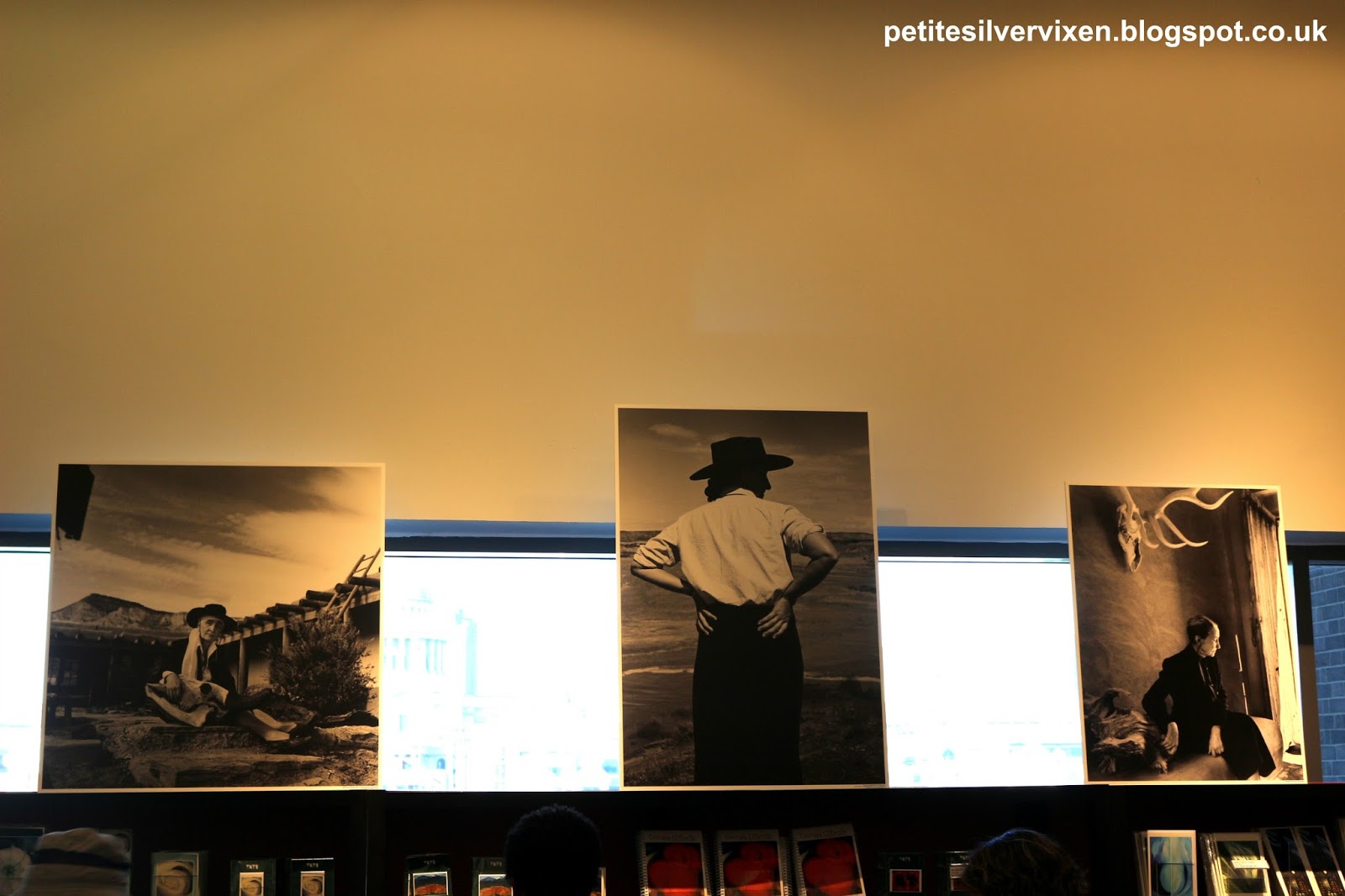 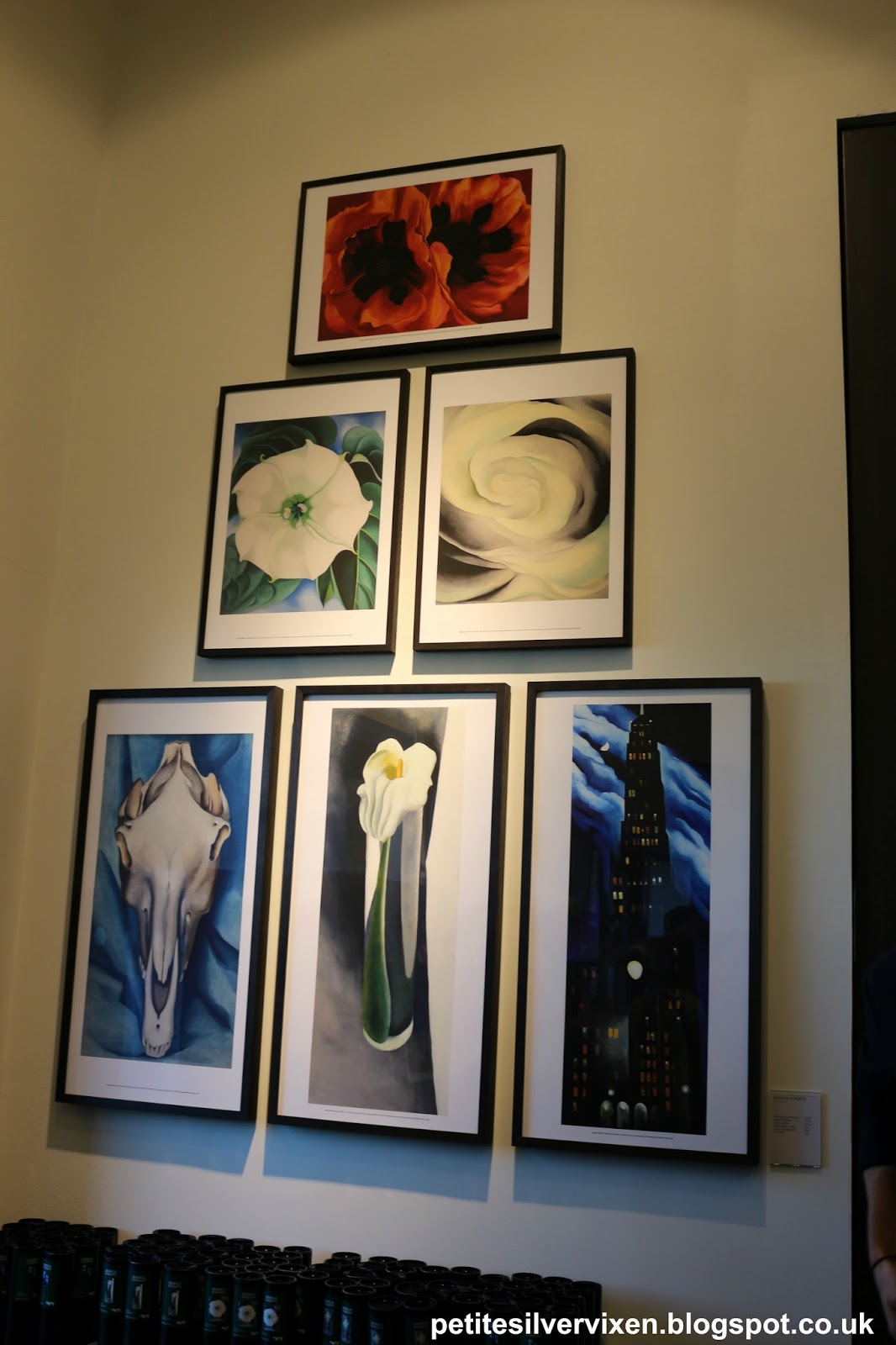 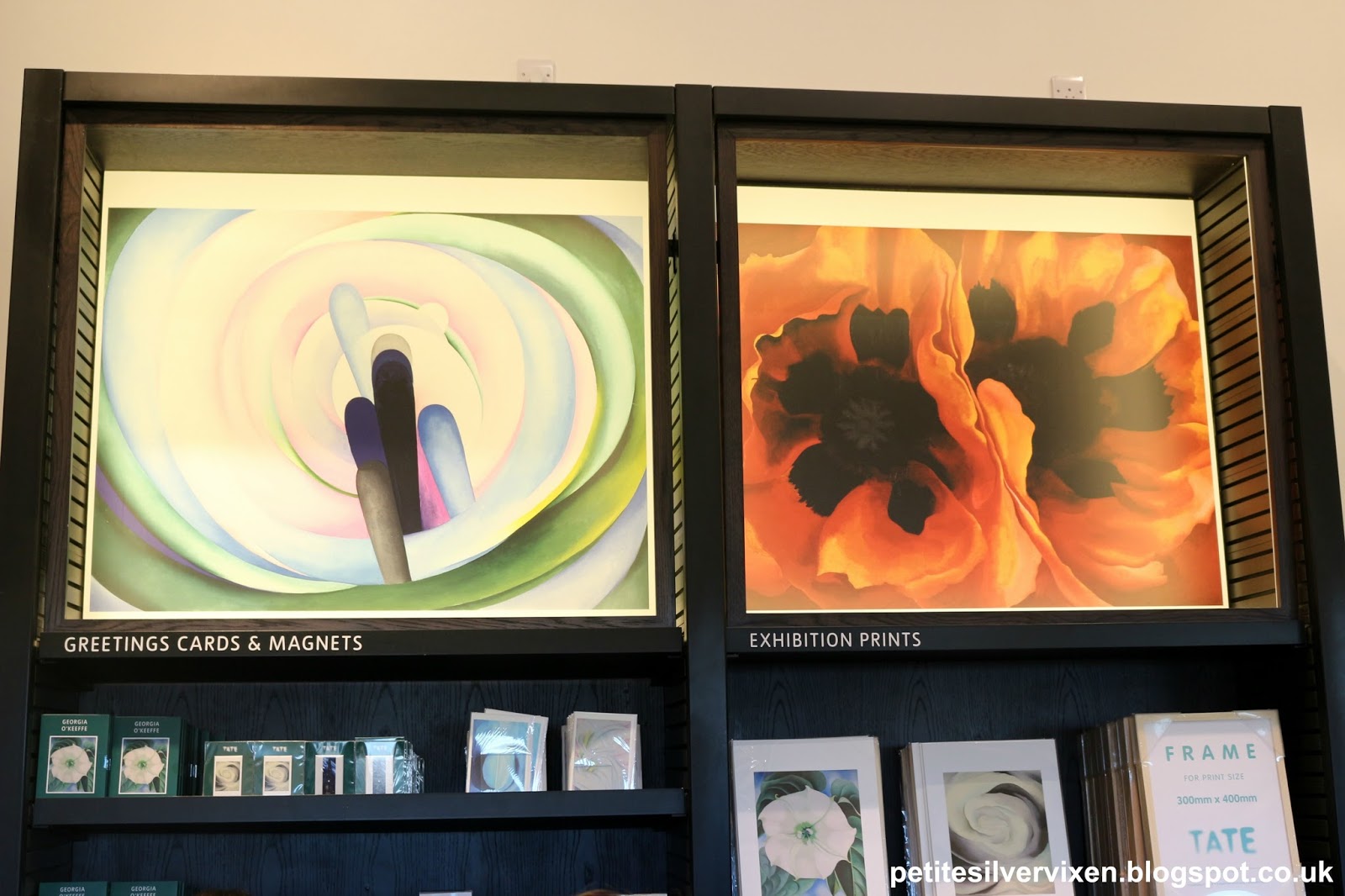 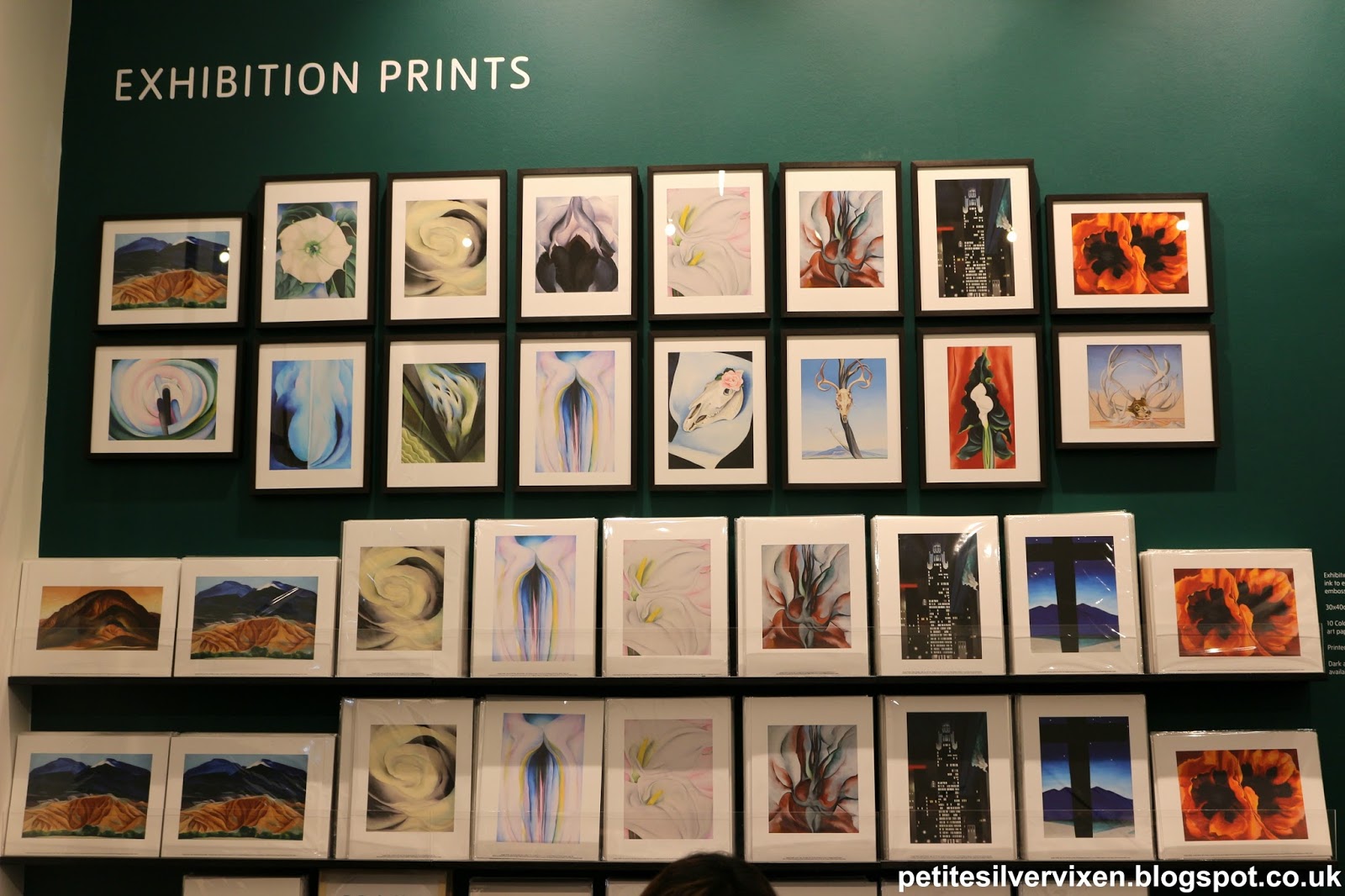 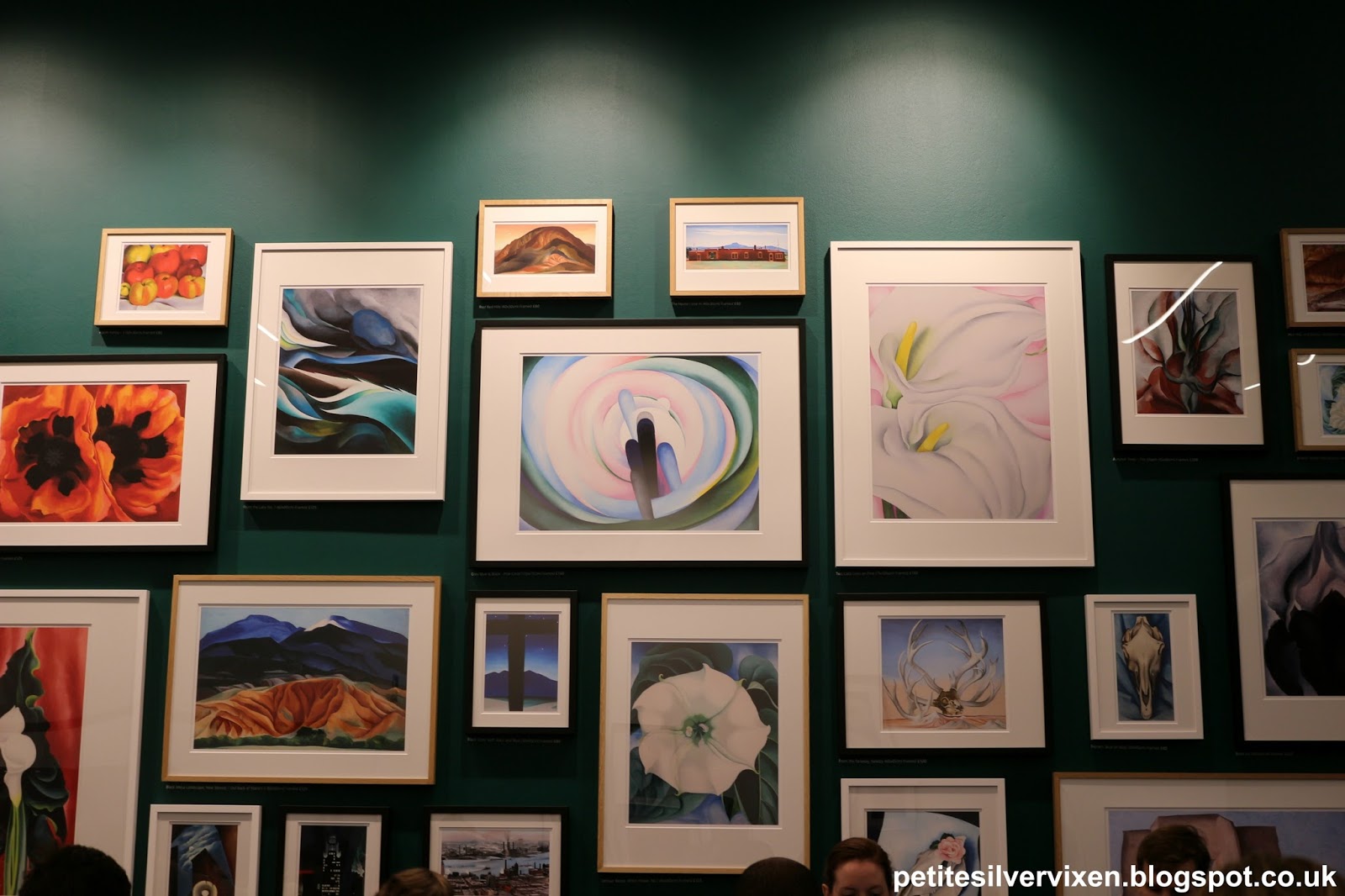 After we’d viewed the exhibition, next stop was up, up and away!

We could hardly make a visit to Tate Modern and not experience the 2 viewing levels. 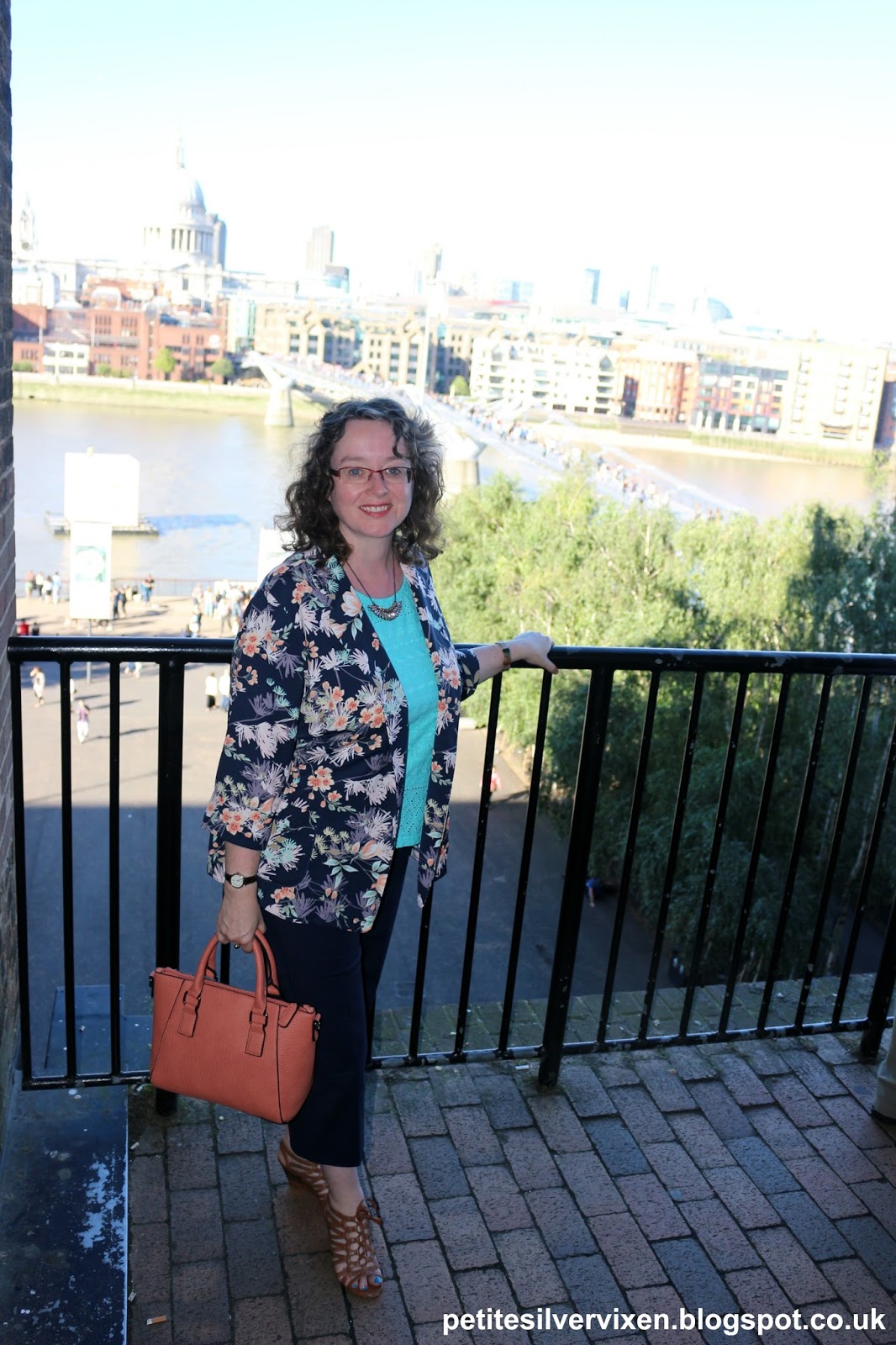 Especially on such a picture postcard day as this!

Doesn’t St Paul’s Cathedral look magnificent, on the other side of the Thames? 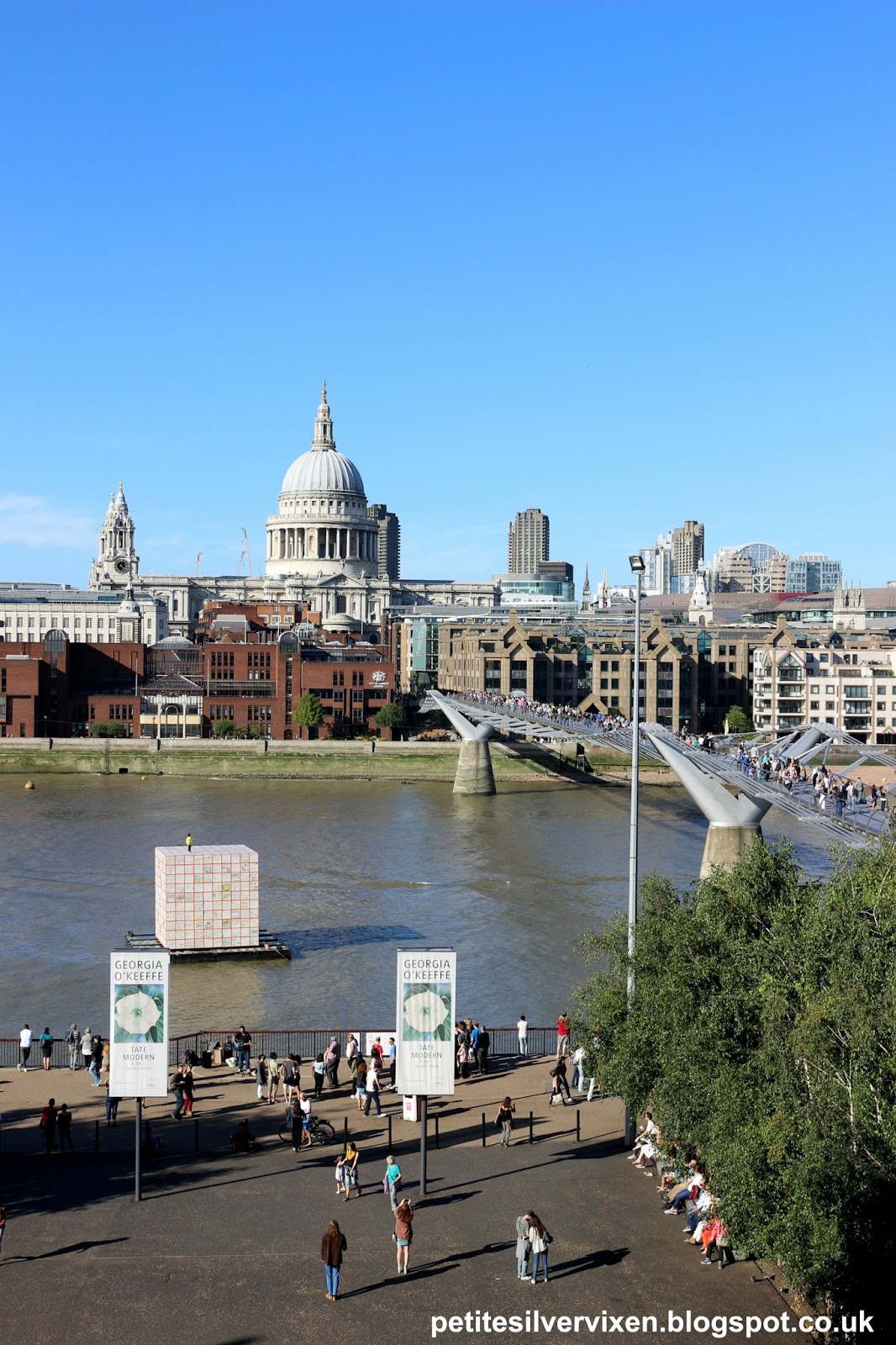 I was breaking myself in gently.  Next stop was the viewing level right at the top of Switch House.

My odd expression is due not only to looking right into direct sunlight but also from trying not to freak out at being so near the rail, despite the fact that it’s almost as tall as me!  The things I do for blogging.

At least I got you a good snap of the Shard in the background! 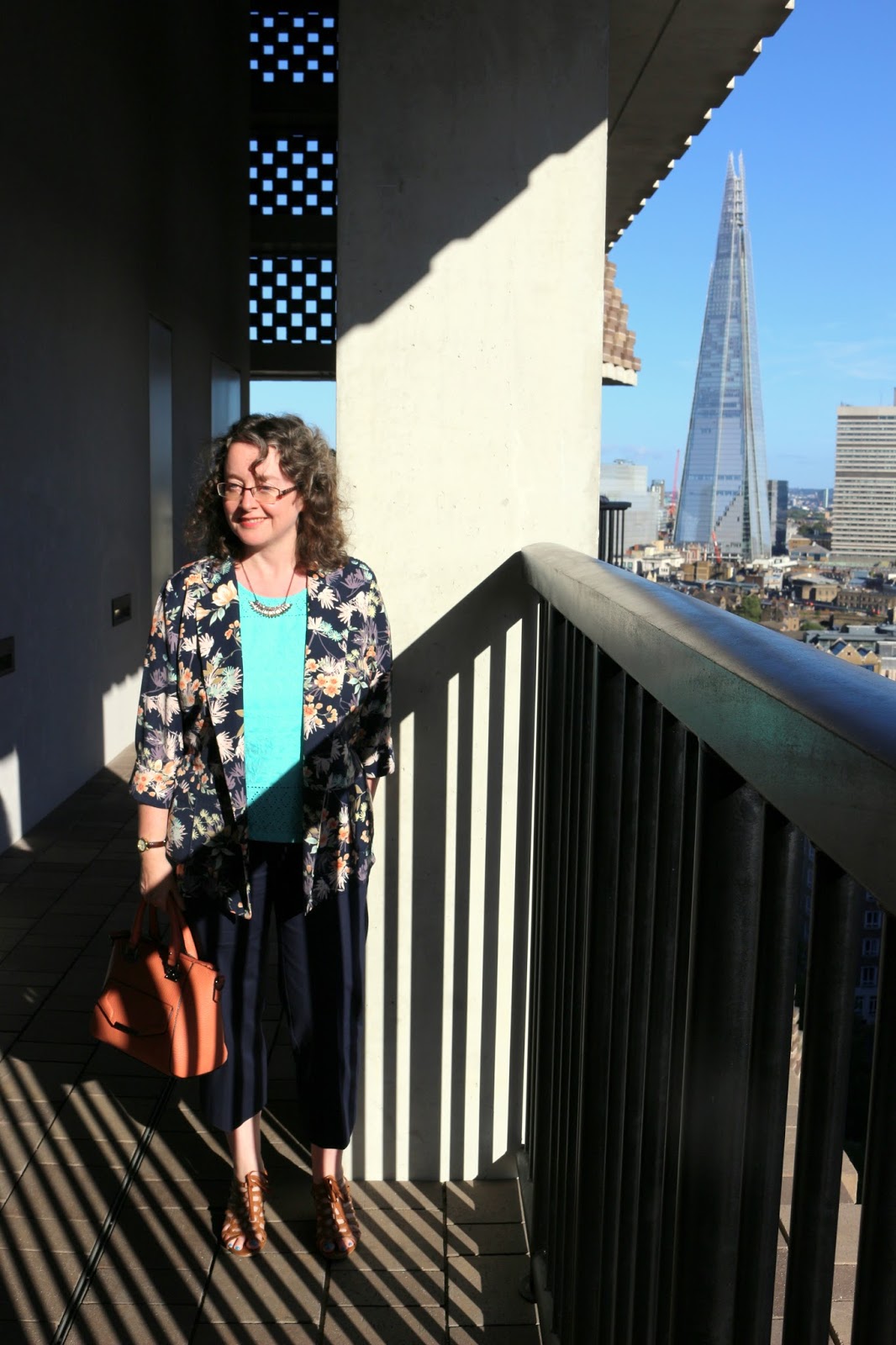 Looking much happier as I’m almost back at ground level – phew.  Soaking up the industrial grandeur of the Turbine Hall, which currently isn’t housing any exhibitions.

Perfect for a spot of outfit posing, about which you can read here. 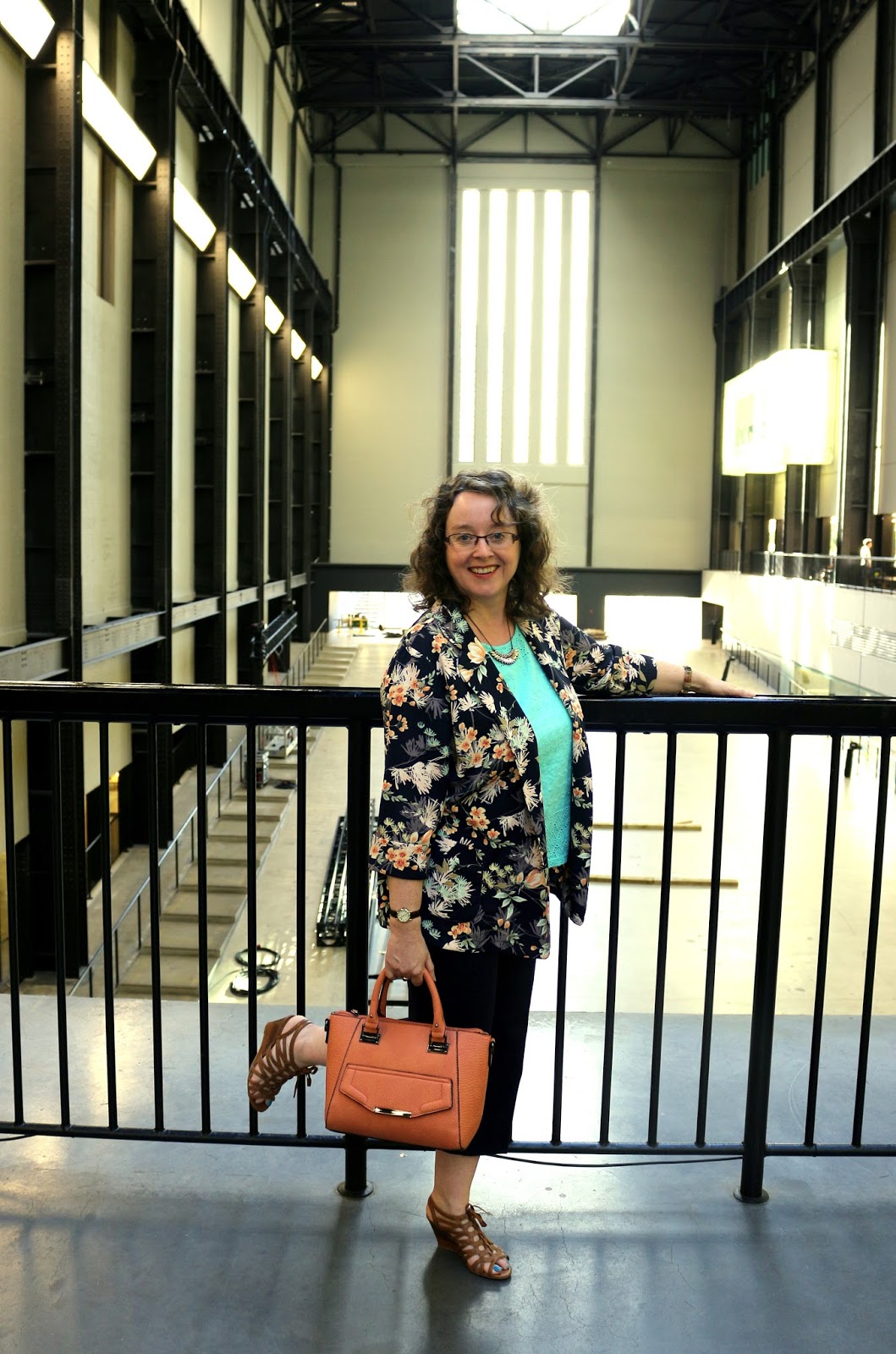 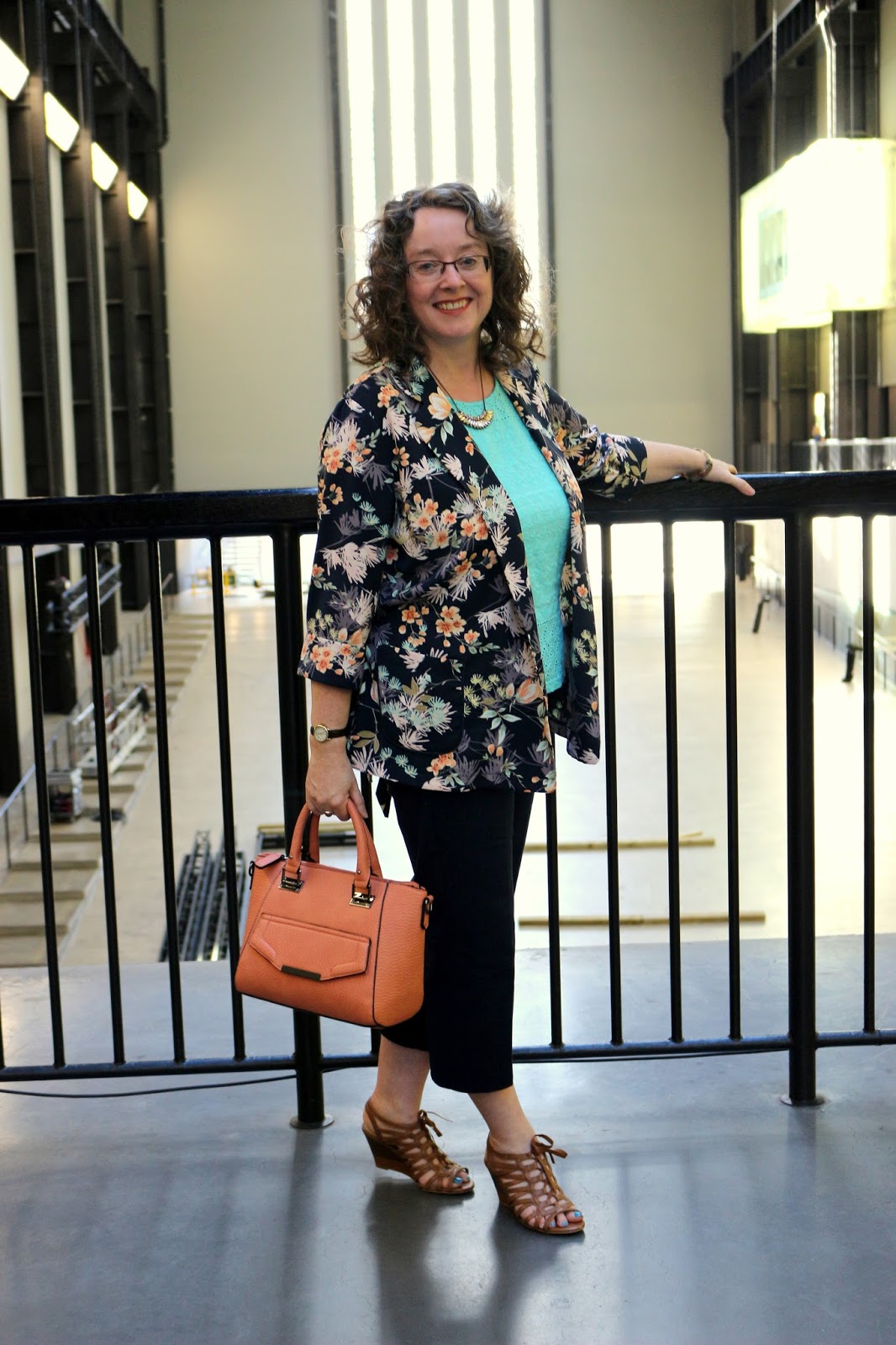 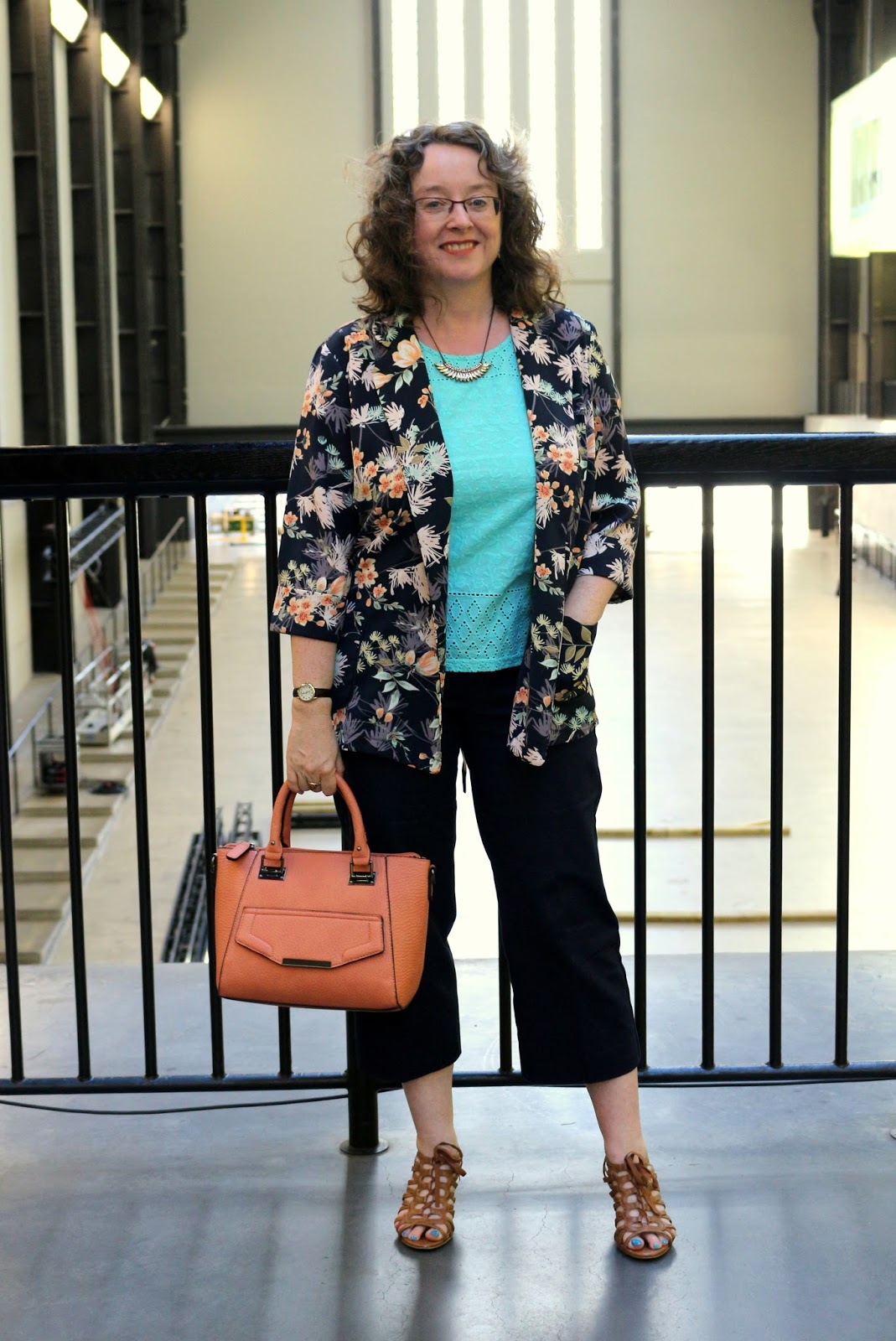 There’s a choice of eating places inside the Tate but as we’d passed a branch of Gail’s, the Artisan Bakery, on the way to lunch (it’s a couple of doors down from The Albion), we popped in there for tea and cake before wending our way home.  It would’ve been rude not too!

Deep in conversation with another of Emily Young’s sculptures.

It’s got its eye on my brown paper bag.  No wonder, it probably could smell the walnut and honey bread inside it that we bought at Gail’s!  Utterly delicious toasted and smothered in butter.  The bread that is, not the sculpture.  The sculpture wouldn’t fit in our toaster. 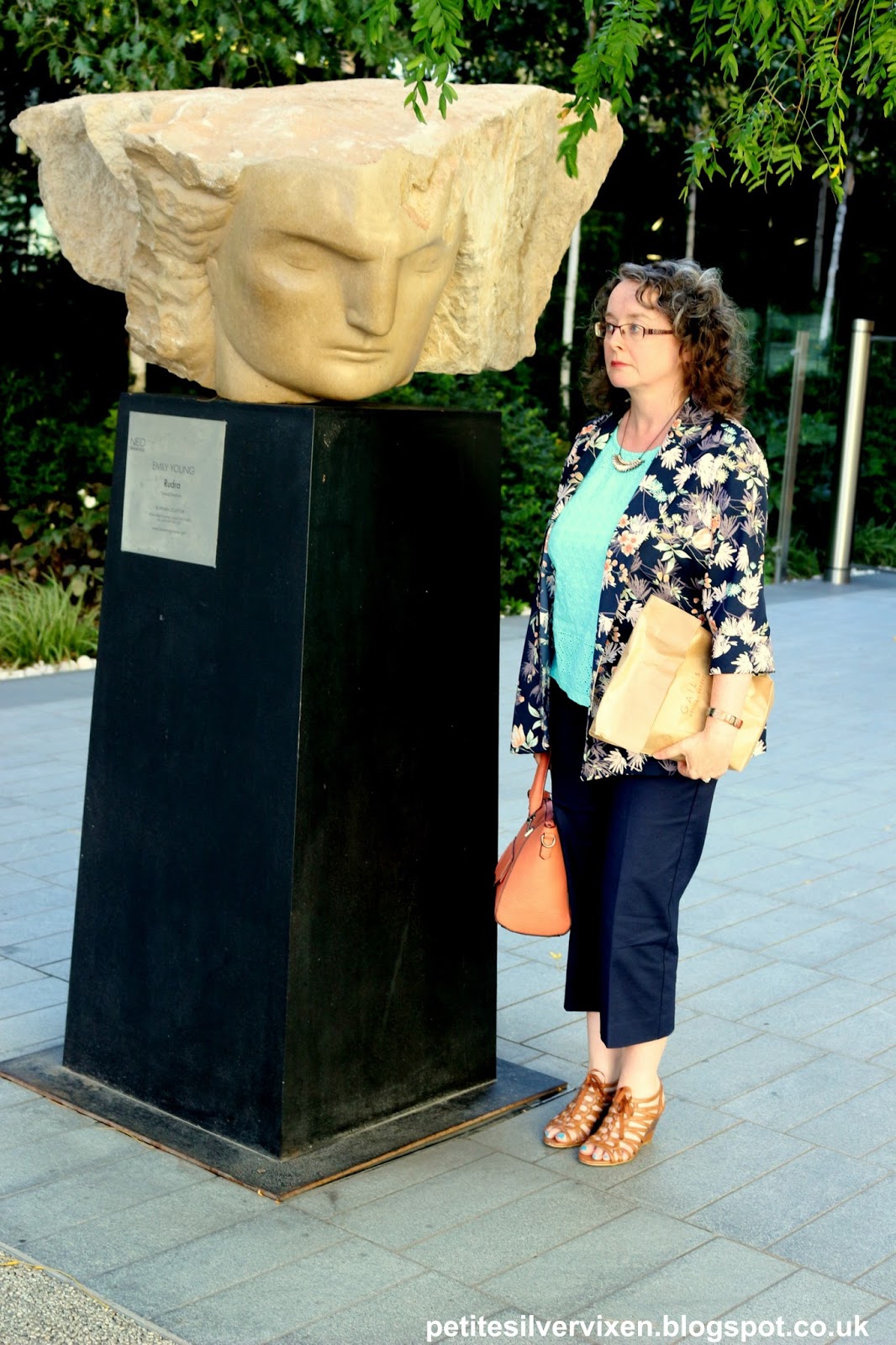 Living in London, and having travelled much more in Europe than North America, I’m steeped in the history of European art and culture.  I’m less familiar with American artists, so it was visually refreshing to experience a painter who is rightly acknowledged as being one of the founding artists and exponents of modernism and abstract art in the United States.

Georgia O’Keeffe Exhibition at Tate Modern is on until 30th October.  Catch it before it closes.